New city requirements for lead testing has landlords across Philadelphia falling behind on renewing their rental licenses, some community advocates say. 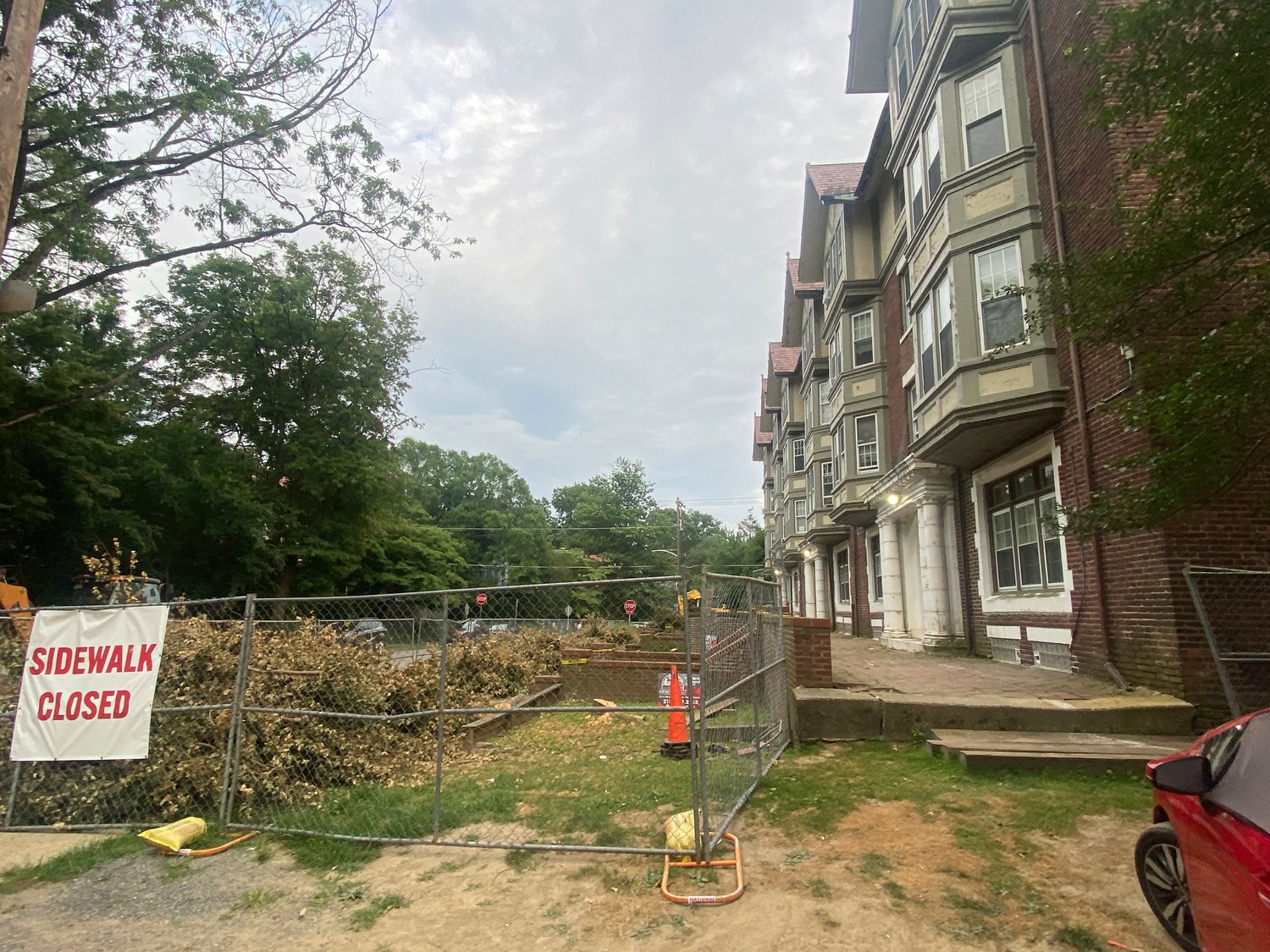 The front of the Cresheim Valley Apartments is under construction to make way for new steps, new sanitary sewers, a new key fob entry system, and more security cameras, according to SBG owner Phillip Pulley.
Photo by Tom Beck
Posted Thursday, August 11, 2022 12:00 am
by Tom Beck

New city requirements for lead testing has landlords across Philadelphia falling behind on renewing their rental licenses, some community advocates say, because  the companies that perform such assessments are dealing with labor shortages.

Osarugue Osa-Edoh, a landlord-tenant attorney with Community Legal Services, told the Local that she’s seen more rental licenses lapse because the test hasn’t been done since the city enacted stronger lead laws in 2019. The legislation mandates that a building’s rental license can’t be renewed unless it's certified lead- free or lead-safe. Previously, rental properties only needed a lead certification if they were renting to families that included a child under the age of seven.

“If landlords are renewing a license, they have to certify that the home is free of toxic lead paint and dust – which requires landlords to get their homes tested for lead dust,” Osa-Edoh said.

Barbara Baumbach, president of George Woodward Co., which manages hundreds  of rental properties in Chestnut Hill and Mt. Airy, said that getting her organization’s properties tested for lead has been “a big hurdle” despite the fact that her buildings are 100% compliant.

“It was a difficult process to work through,” Baumbach said, despite her support for the legislation. “I support anything that’s in the best interest of our tenants' houses and well-being. I understand that grandparents live in houses where their children come to play and can be there for lengths of time that would warrant lead testing.”

Meanwhile, another landlord in Mt. Airy has yet to complete the process. SBG Management Services Inc., which owns Allens Lane Apartments and Cresheim Valley Apartments in Mt. Airy is currently renting to tenants despite having an expired license.

SBG owner Phillip Pulley told the Local that he can’t get new licenses because both buildings still need their lead-safe or lead-free certificate. He’s been trying to schedule the test, he said, but the company he wants to hire hasn’t been able to inspect the properties because of the labor shortage.

Tenants in these buildings - who say they have long been complaining about issues with maintenance - now wonder whether the expired license could give them new leverage.

“I’ve had a million issues with mice,” tenant Cynthia Dutwin said. “We went without hot water for two weeks during the winter; there are cracks that are pretty continuous that occur throughout the building and in the apartments in the walls and ceiling.”

When things do get fixed, Dutwin said, they get fixed halfway.

“It’s like the people who fix things don’t know how to fix things,” she said. “They do it in a sloppy way.”

Tenant Christina Jackson said she’s had repeated issues with maintenance in the building.

“They’re evasive and they tell you one thing but don’t really follow through sometimes,” Jackson said. “I’ve had a leaking ceiling in my bathroom. They fixed it; the leak came back and then they said they were going to fix it and then it leaked again. He had to come back like four times.”

SBG owner Phillip Pulley said he’s raising rents because he has to, due to rising inflation and the changing economy.

“I don’t like having rental increases, and if the government would do something about [inflation] we wouldn’t have this problem,” he said. “My heart bleeds for them, but everything costs more today.”

According to city spokesperson Kevin Lessard, landlords “are not legally entitled to collect rent during an unlicensed period.”

As a result, “tenants are within their legal right to withhold rent during an unlicensed period,” Lessard said. “It is unlawful for a landlord to retaliate against a tenant for exercising their rights.”

But does that mean withholding rent is the best course of action for tenants?

“What we often see happen is that tenants find out that the landlord doesn't have a renters license and stop paying rent, which is within their rights,” said Osa-Edoh, “and then the landlord goes to sue them in eviction court for nonpayment of rent.”

Even though the landlord doesn’t have a rental license, Osa-Edoh explained, the court will accept the case, assign it a landlord tenant case number, and then dismiss the case at the hearing.

“They put the case in what's called noncompliance,” she added. “Which means that they don't have the necessary documents, because if you don't have a renter's license, not only can you not collect rent, but you also can't evict. You can't recover possessions.”

But the fact that the case is accepted should still be a concern for tenants because even if the tenant wins their case, there is now a landlord tenant case associated with the tenant.

“So if you decide to move from that property and look for other apartments,” she continued, “these tenant screening companies are going to go into these public records for municipal court and look up Tina Tenant. And all they're going to see is that Tina Tenant had a nonpayment case in July of 2022.”

According to the city’s Department of Licenses and Inspections, it’s not uncommon for landlords to have expired rental licenses - approximately 10% of licenses are not renewed each year. Most of these are single family dwellings, so it’s not always possible to distinguish between a lapsed license and locations that are no longer being rented.