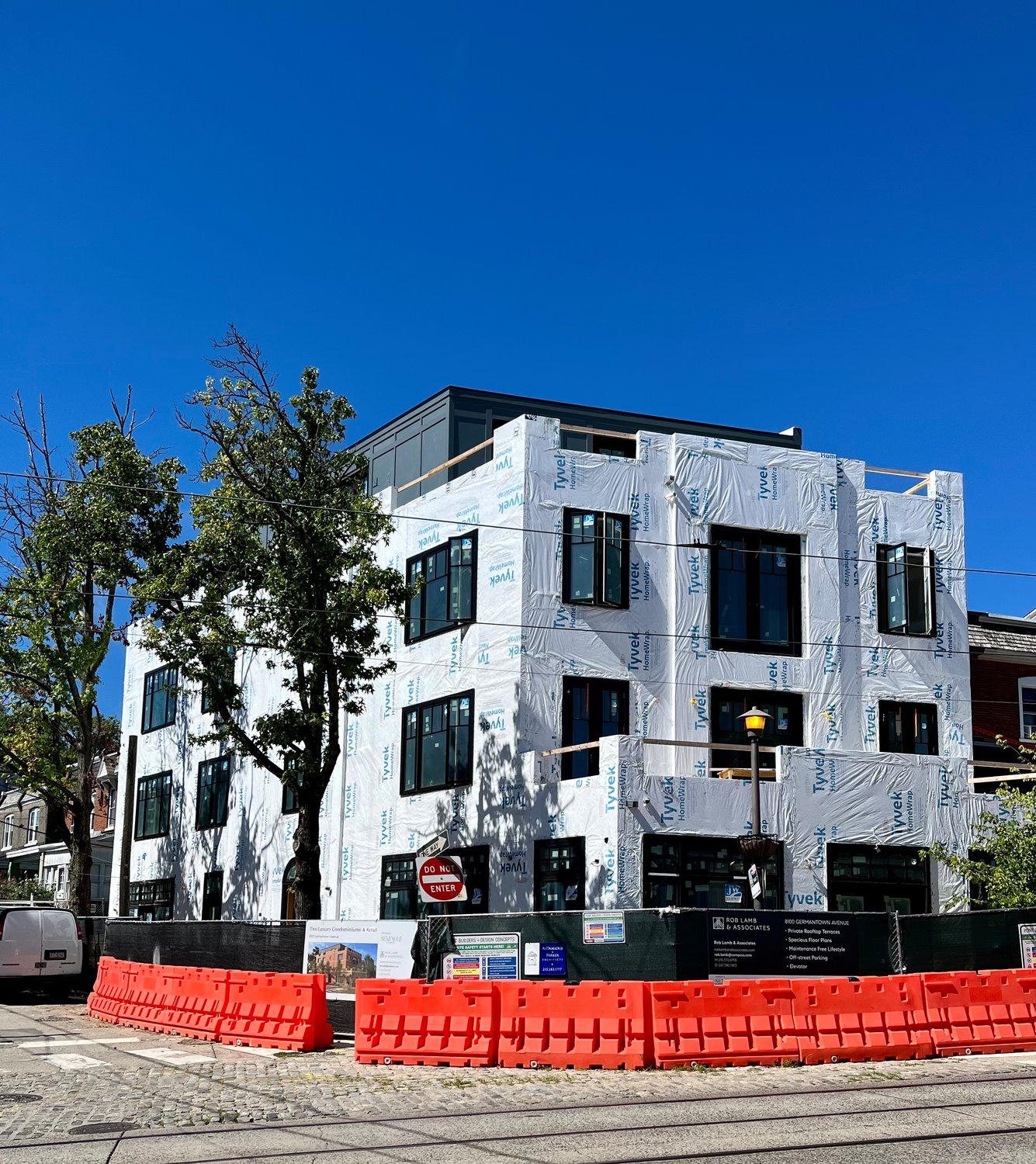 A building at 8100 Germantown Ave., now under construction, is being marketed to the same kind of resident who bought at One West, the condo complex several blocks north.
Photo by Carla Robinson 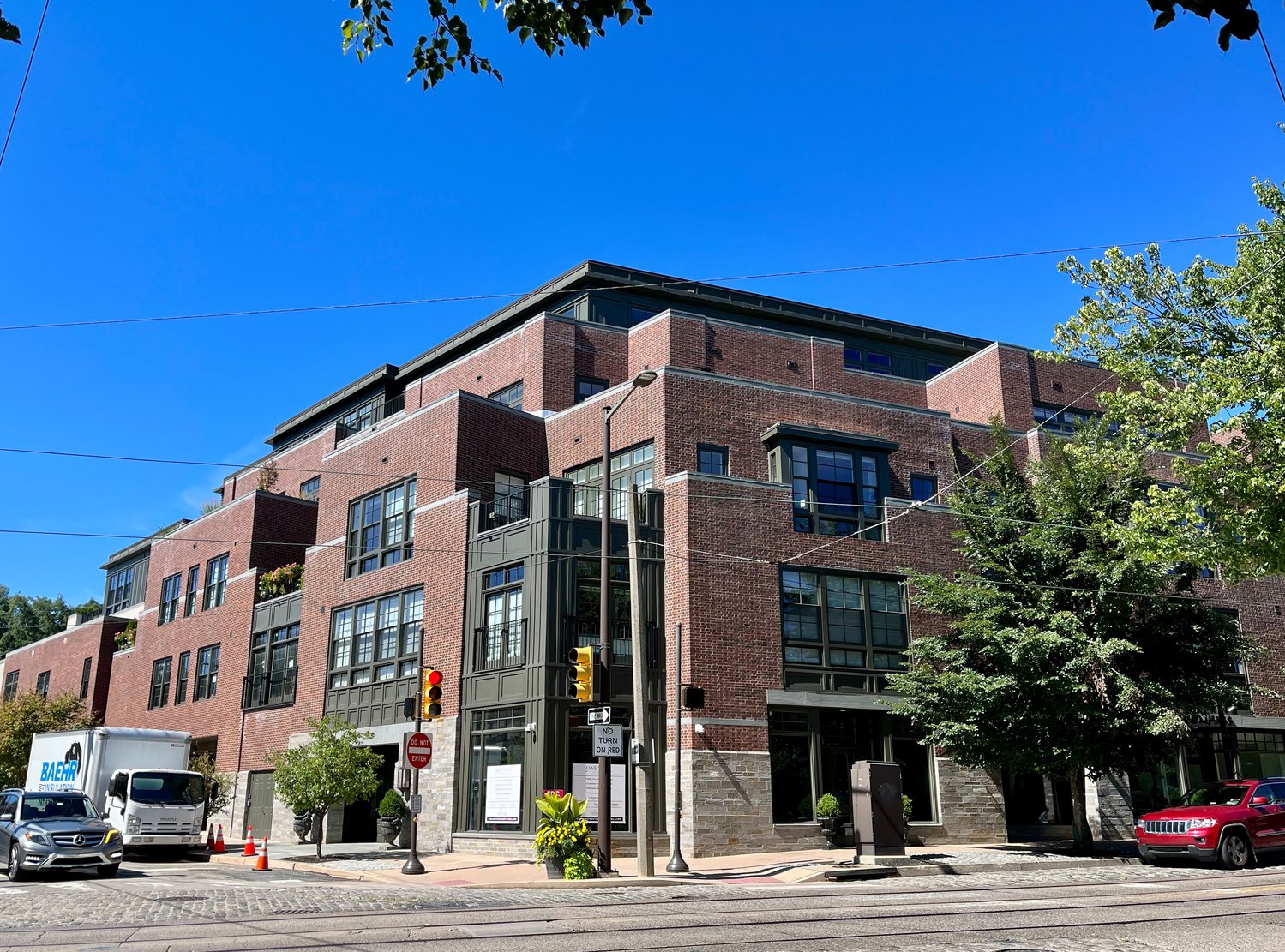 Condo complex One West is several blocks north of a new development at 8100 Germantown Ave., now under construction.
Previous Next
Posted Wednesday, September 7, 2022 12:00 am
by Stacia Friedman and Carla Robinson

According to local developers and real estate agents, that’s what a good portion of the same affluent market that Houston courted in the late 19th century is now demanding.

The attraction, according to Mt. Airy-based developer Ken Weinstein, is that condos usually have elevators and require less maintenance. They typically have two or three bedrooms rather than five or six, they don’t have a lawn to mow and they come with a condo association that takes care of basic repairs.

“We’re seeing a good number of empty nesters who want to stay in Mt. Airy and not have to move downtown for a condo,” Weinstein said. “We do also see some newcomers who are just discovering Northwest Philadelphia.”

And while many of these buyers are longtime residents who have traded in their large Chestnut Hill and Mt. Airy homes for the ease and convenience of condo living, some are coming from outside Pennsylvania.

“Compared to real estate in Los Angeles, Boston and New York City, Chestnut Hill is a crown jewel,'' Compass real estate agent Rob Lamb said. “Condo buyers are coming from as far away as California because the values here are astonishing.”

And these buyers bring value with them, Lamb said, because the new density of housing along the Germantown Avenue corridor helps support the shops that make it so charming.

“We’ve had some trouble, over the years, sustaining a strong retail sector in Northwest Philadelphia,” Lamb said. “That’s partly because we have a lot of big, single family houses  – which doesn’t result in the kind of density you need to support those businesses. We’ve had to find ways to bring people from outside to come and shop here as well.”

Kim Manning, vice president of university communications and marketing at Rutgers University, is a typical example of just who’s buying these condos. When she decided to sell her home in Central New Jersey, she knew she wanted to downsize.

One of her “must-haves,” she said, was that everything had to be on one floor with an elevator to accommodate visits with her elderly mother. After ruling out New Jersey due to escalating taxes, she looked at 7111 Germantown Avenue, an adaptive reuse condo project at the former Mt. Airy Presbyterian Church property at the corner of Mt. Pleasant and Germantown Avenues.

“It checked all the boxes on my list,” said Manning, who bought the first condo in the 19-unit building. “I like neighborhoods. I did not want a high rise or a big city environment.

“I love Mt. Airy’s diversity,” she continued. “It brings together a vibrant mix of people at different stages of their lives.”

She also appreciated the fact that the church had asked the developer to buy the building, rather than the other way around, she said.

“I liked that the church had approached the developer to generate financial stability,” Manning said. “It was a construction site at the time and the builders who showed me around lived in the area too. I liked that.”

Not all condo developments are so big. Take, for example, the narrow row of single, three-story, red brick condos tucked away on East Durham Street, just off Germantown Avenue.

They appear to be a modern version of Philadelphia row houses. But to new owners Sharne Algotsson and her husband Jan, they were the answer to their prayers.

“We had just sold our three-story condo in the Francisville section of the city and had only six weeks to buy a new home,” Algotsson said. A semi-retired interior designer, Algotsson and her husband had previously lived in different parts of Philadelphia, Washington, D.C., and Stockholm.

“We had been prepared to rent a furnished apartment if we couldn’t find a place to buy in time, but as soon as we saw this new condo on a quiet little street in Mt. Airy – we were sold,” Algotsson said. “The big windows provide lots of light, the spacious open-floor plan, the roof deck, and the portico with a charging station for an electric car.”

The clincher, again, was Mt. Airy itself. “We can walk to everything. Plus, we love the proximity to the Wissahickon Woods,” Algotsson said.

Cost, and the market

While the new condos are smaller than the single family homes that empty nesters are leaving, they’re not necessarily less expensive.

In fact, they can cost more. Lamb, who has been selling real estate in Northwest Philadelphia for 23 years, said prices began taking off with the development of One West, the mixed-use complex on Germantown Avenue that’s home to the Fresh Market grocery store.

When they first came on the market, the 20 custom condos in that building were selling for just under $700 – about double what had been the typical square-foot price for the neighborhood. Now, according to developer Richard Snowden, they sell for almost triple the old standard.

“One West really blew up what had been the standard for price per square foot,” said Lamb, adding that, for him, the experience was “eye-opening.”

“This was a whole new kind of high-end buyer that we were seeing – interesting people, who have accomplished a lot in life, and who were selling much larger houses, with lots of acreage, because they wanted the turn-key lifestyle,” he said. “They wanted to be able to stay connected to their kids, and to the area, but still have that second home. But while they wanted to downsize, they still wanted space - enough to be able to keep some of their favorite furniture, for instance.”

The result is that other projects now in development, like the one he’s now listing at 8100 Germantown Avenue, are reaching for a similar market. That project, which is currently under construction, is listed at $4.6 million for the whole building - which will include two living units and two retail spaces.

“One West was such a big deal for Chestnut Hill. It really stabilized retail for that section of the avenue,” Lamb said. “The investment in the hotel, the Market on the Fareway – all that came on the heels of the fresh market investment.”

Of course, affordable housing is a serious concern in both Mt. Airy and Chestnut Hill, where prices for any kind of real estate have been rapidly rising.

But according to Weinstein, who was a partner in creating the 7111 Germantown condos at the Mt. Airy Presbyterian Church, new condos are hard to produce at lower price points.

“They’re a new product that didn’t exist before - so that means either they’re new construction or they’re a total renovation,” Weinstein said. “You can’t take an apartment building and make it into condos without renovating it, which triggers new energy and building codes. So you have to make significant improvements to the building.”

And even though lower- and middle-income people may be priced out of the high-end condo market, Weinstein said, they still benefit from their presence.

“We need more people living along Germantown Avenue to support the restaurants and other small businesses in the community,” he said. “We obviously need a healthy mix of rental and homeowner developments, but the real estate tax assessed on condos in northwest Philly helps pay for essential city services and will lead to growth in our region.”

If you think condos are new in Northwest Philadelphia, you haven’t been paying attention. More than 40 years ago, several apartment buildings off Lincoln Drive quietly converted to condominiums, including Malvern Hall and The McCallum, both built in 1925 on the 6600 block of McCallum Street.

Around the same time, Anglecot, which was built in 1883, became Chestnut Hill’s first historic condo conversion in 1983.

Developer Richard Snowden, who launched his career with Anglecot, said he thinks condo conversions can be a good way to preserve historic architecture.

Anglecot, for example, was a large and elaborate mansion at the corner of Evergreen and Prospect Avenues. It was designed by noted Philadelphia architect Wilson Eyre, and had been converted into a sanatorium, and then sat empty for years by the time he bought it, which was in 1981.

“That was a building that had really become something of a white elephant. It was just so big, and it needed so much work, that nobody was going to want it as a single-family residence,” Snowden said. “It took us a year to get it through the approval process, but we did. So now there are nine really nice living units there, which we were able to accomplish without disturbing the architectural elegance of the original mansion.”

Absent that solution, he said, it may very well have been torn down and redeveloped into something the neighborhood would not have wanted.

“For many of our large historic properties, condo conversion can be a good solution,” he said.

It makes one wonder what Henry H. Houston would say about all the new developments springing up along the Avenue. After all, attracting people of means to luxury living was his idea in the first place.