Alphonso “Al” Lassiter, 72, has a perpetually smiling face that has brightened up the Chestnut Hill Weavers Way market at the cash register and around the store for the past 12 years. 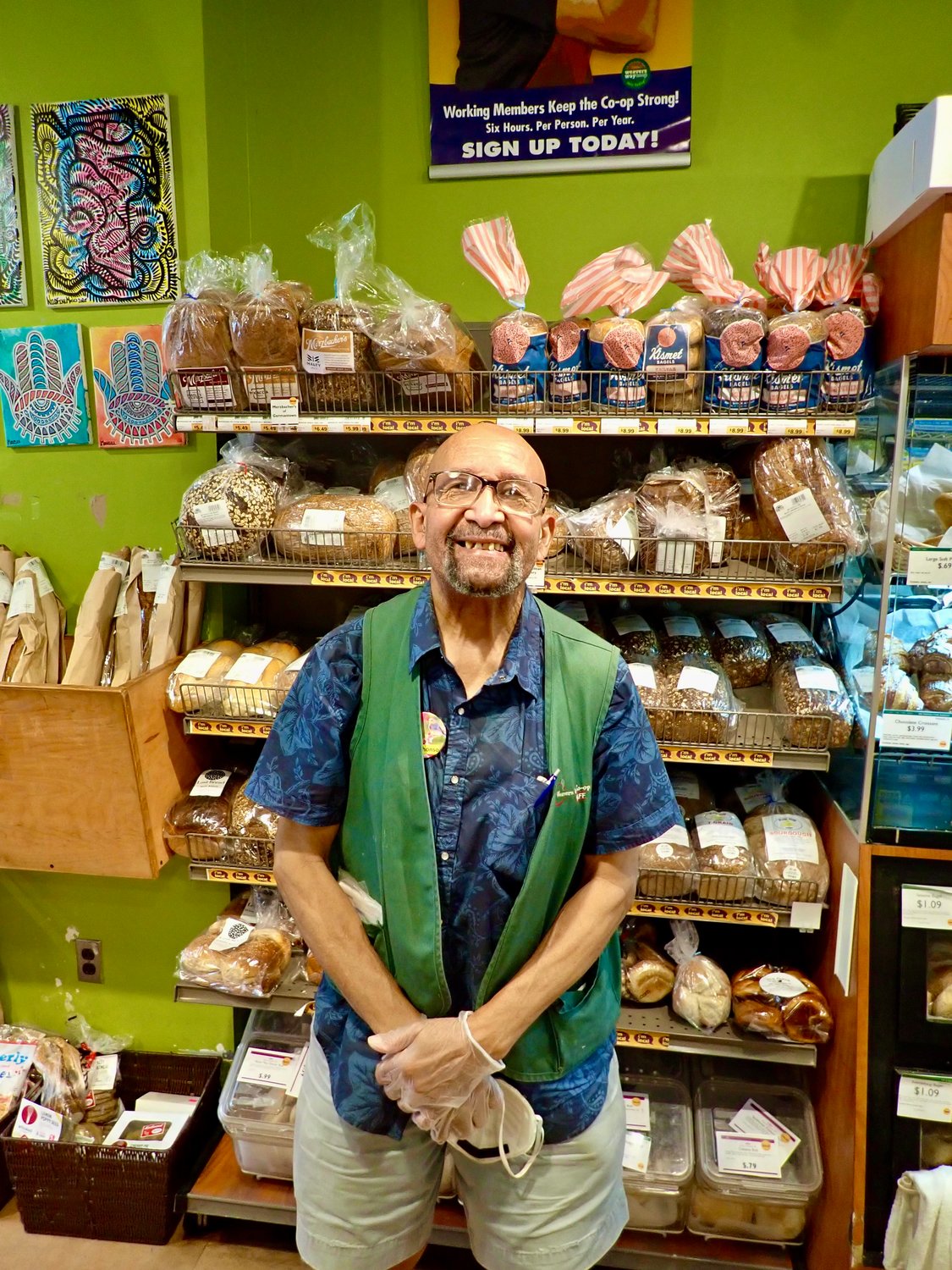 Lassiter, seen at his day job at Weavers Way in Chestnut Hill, has a one-man art exhibit at the Lieberman Gallery in the Settlement Music School, 6128 Germantown Ave., now through Dec. 22.
Photo by Len Lear 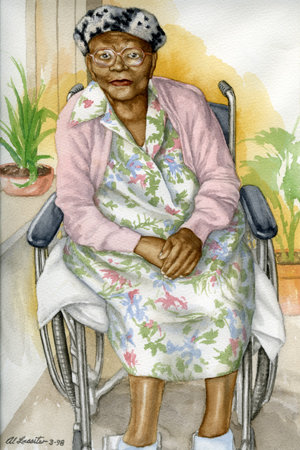 A pensive “Woman in a Floral Housecoat” by Lassiter. 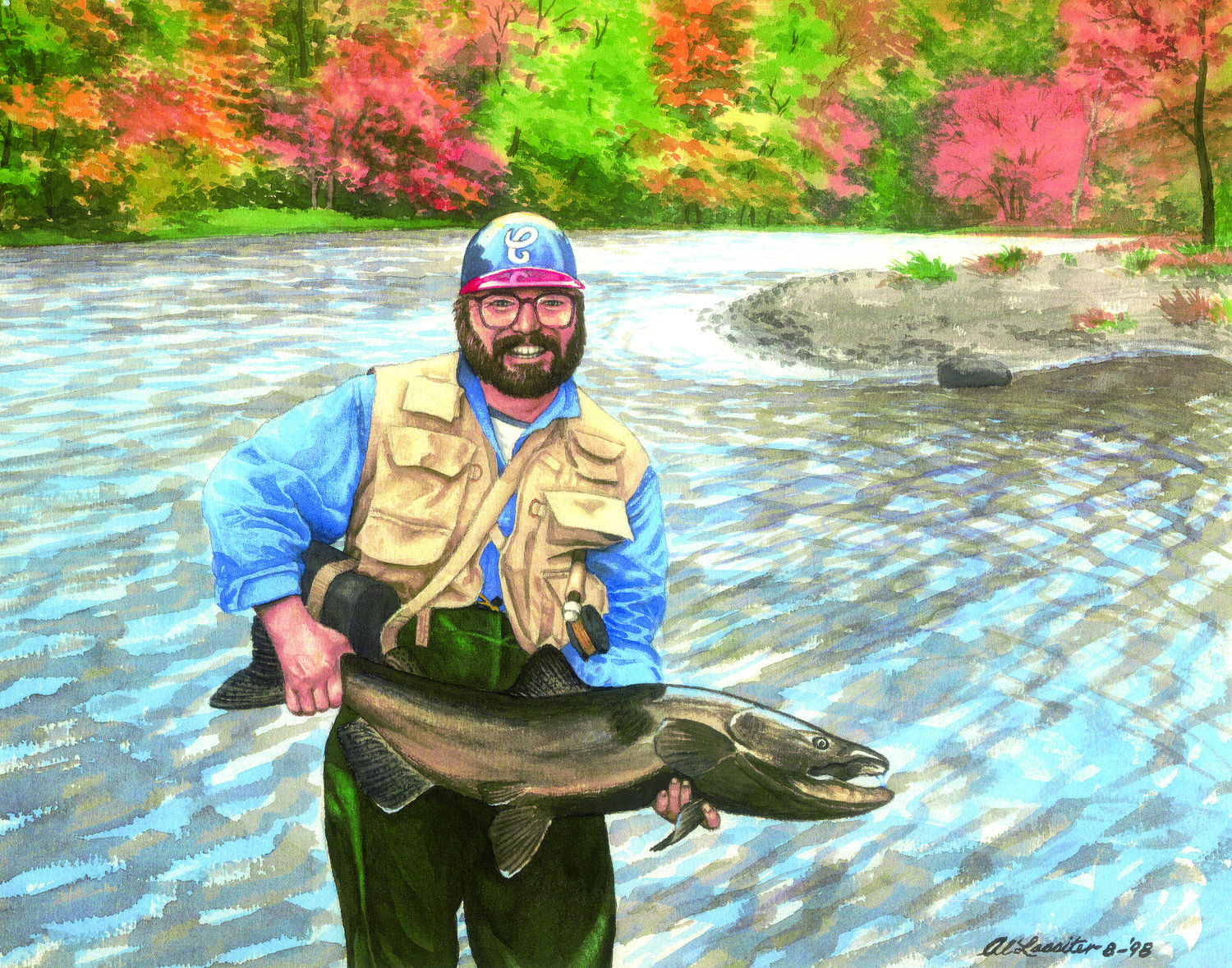 “Charlie's Big Catch,” by Lassiter, should appeal to any fisherman.
Previous Next
Posted Thursday, September 22, 2022 12:00 am
by Len Lear

Alphonso “Al” Lassiter, 72, a perpetually smiling face that has brightened up the Chestnut Hill Weavers Way market at the cash register and around the store for the past 12 years, has not had a good last 12 months.

“First of all,” he said last week, “I have an old house that needs a lot of attention. I can't afford to pay someone to do the repairs, so I am doing them myself, which is tough at my age. I have also had two surgeries recently.”

Lassiter was rushed to the trauma unit at Einstein Medical Center in Olney with a broken rib and sternum and severe back pain. The other driver, a young woman, suffered only minor injuries. Lassiter eventually recovered and was able to resume working at Weavers Way in Chestnut Hill, starting daily at 5 a.m., but then he contracted COVID in mid-June.

What most customers may not know about Lassiter, however, is that he is a very talented artist who currently has a one-man show at the Lieberman Gallery in the Settlement Music School, 6128 Germantown Ave., which began Sept. 6 and will continue through Dec. 22. The gallery is affiliated with Allens Lane Art Center.

Weavers Way began exhibiting Lassiter's work in March and April on the wall in the front part of the store over the cashier's counter, which resulted in eight sales.

Then one shopper, Ken Weiner, suggested that Lassiter contact Allens Lane Art Center, which put him in touch with Jean Plough, manager of the Lieberman Gallery, its satellite.

“Jean offered me the exhibit,” said Lassiter, who is showing 12 watercolor paintings and two huge pastel drawings there. “I was thrilled. I have been in many group shows, but this is my first solo show.”

Lassiter did not have the most promising start in life. He grew up on welfare in a public housing project in Norfolk, Va., and his father left the family when he was an infant. His mother, who was one of 15 children, had serious emotional and mental health issues. “To her credit, though, she did take good care of us,” he said.

The rigid segregation in Virginia was another hurdle Lassiter had to jump over.

“Segregation was the law,” he said. “Wherever we traveled, we would see signs designating areas for 'colored' and for 'white.' Even the cemetery was segregated. I remember going to the beach, and a fence separated whites from blacks. The white side had the amusement park.”

Lassiter discovered early that he had artistic talent. He entered Carnegie Mellon University in 1968 and was awarded scholarships and grants. He majored in fine arts but left school during his junior year while dealing with depression, and worked at a residential day care center in Pittsburgh, where he worked with children who have emotional disorders having temper tantrums and seizures.

“I loved the job,” he said. “And it was rewarding when a child made progress, but the job may be why I did not have children of my own.”

Lassiter married his first wife, Kathy, in 1978 and moved to Philadelphia, where he taught art to adults with mental and physical disabilities. After completing an illustration course at the University of the Arts in 1980, he pursued a professional art career, eventually becoming a full-time artist at Cable TV Guide magazine in Jenkintown.

There, he met Rose Caporaletti, a graphic artist at Temple University, and the couple married in 1993. (Caporaletti produced all the printed materials for the current exhibit.) They were part of the now-defunct Artists League of Mt. Airy, an artist and volunteer association, and they maintained a gallery space at the now-defunct Sedgwick Cultural Center, holding frequent exhibits. From 1986 to 1999, Lassiter created illustrations and works of fine art in watercolors, acrylics, pen and ink, pencil and pastels. He has exhibited at the Philadelphia Sketch Club and Woodmere Art Museum.

Beginning in 2000, Lassiter worked as an illustrator, graphic artist and customer service representative.

“Bonnie Shuman [the head chef at Weavers Way] then apologized [in 2010] for offering me such low pay as a dishwasher,” he said, “but it was still $2 an hour more than I had made at Target, my previous job. Since then Weavers Way has made a concerted effort to pay people at least $15 an hour.”