Fairmount Bark provides boarding for a night or a week or two; day care, including day care home visits by staff members; bathing; and all grooming services except for hair cutting. 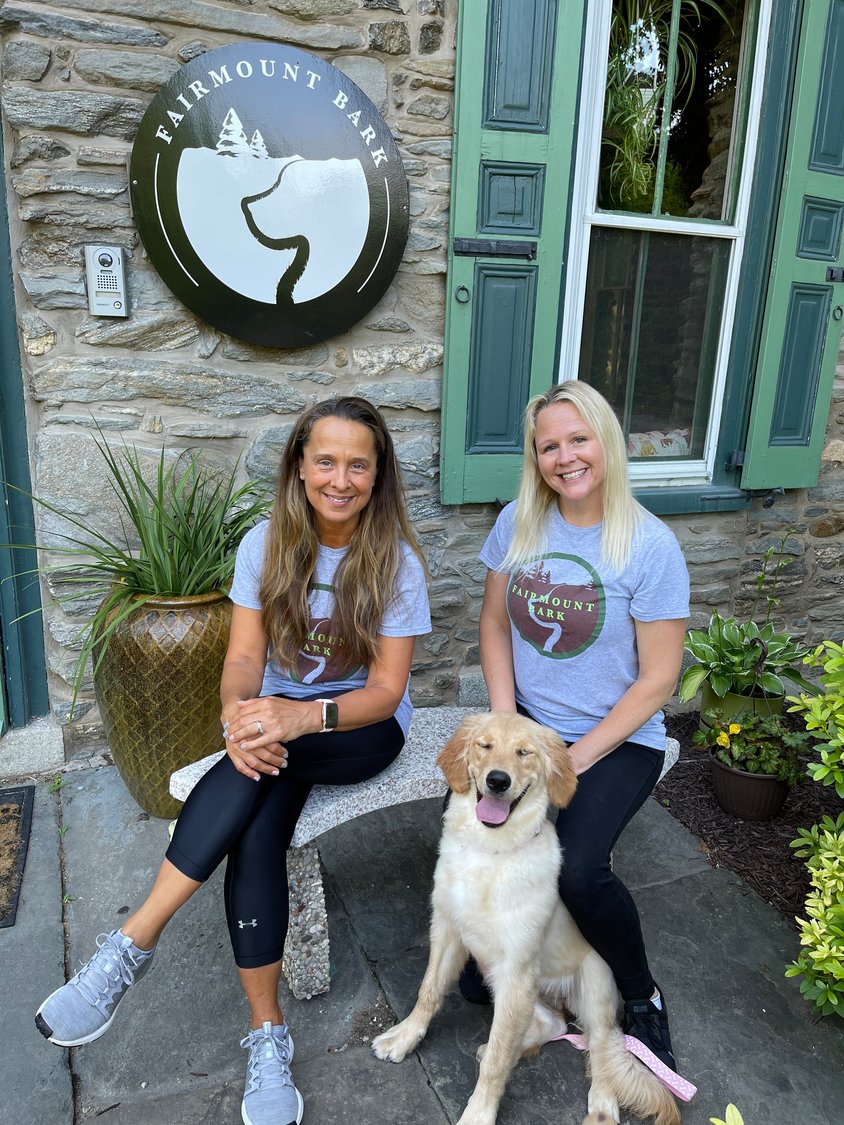 “We want to thank the people of Mt. Airy and Chestnut Hill who have made us feel so welcome and for spreading the word about us at Pastorius Park. We have had such a great reception from the people here, and it means so much to us because we have been talking about doing this for so many years, and now we finally did it.”

This is a comment from Megan Paugh (pronounced “paw,” oddly enough), 43, and Michelle Weidinger, 50, whose dream for many years of opening a pet care business was finally realized late in 2019, just a few months before the coronavirus almost shattered that dream to pieces.

Megan and Michelle both were veterinary technicians for 25 years, most of that time for Wissahickon Creek Veterinary Hospital in Roxborough. In November of 2019 they purchased the building at 7627 Germantown Ave., on the southeast corner of Germantown and Cresheim Valley Drive, on the border that separates Chestnut Hill from Mt. Airy. The 19th century property was previously a private residence owned by a business consultant. “We had always thought about doing this, so it was such a thrill,” said Michelle. “Then we started transforming the building into a pet care business when the pandemic hit.”

Michelle had been doing pet sitting for 22 years, which has been integrated into the new business. Renovations and transformation of the building began before the pandemic — new shelves and cages, a mini-dog park in the rear, etc., but these significant alterations had to be delayed until November, when contractors completed the work. On May 21, Megan and Michelle received their license from the state to be able to board pets and engage in all aspects of pet care.

They are now providing boarding for a night or a week or two; day care, including day care home visits by staff members; bathing; and all grooming services except for hair cutting. That is because it is so difficult to find and hire qualified groomers, just as it is to hire restaurant workers and other retail business employees, possibly because stimulus and unemployment payments have discouraged many previously employed people from going back to work.

Another fact that many dog owners may not realize is that, according to experts, dog grooming can be extremely physically demanding. Groomers are prone to back problems from lifting heavy dogs and carpal tunnel syndrome from the repetitive motions of brushing and cutting.

Incidentally, dog groomers were able to remain open during the pandemic because they were designated by the federal government as essential workers.

Fairmount Bark can now accommodate 21 pets for boarding “The day care has been steady,” said Michelle. “People are going to the shore again, and they need someone to take care of their pets. We have a very good relationship with our previous employer and other vets in the area, and they have been sending us customers for pet sitting, boarding and day care.”

The office has huge, original stone walls from the 19th century and a homey atmosphere as well as a basket of tennis balls in the office. “The dogs run this place; we just work here,” said Megan. “You would not believe how fast we go through these tennis balls. They are a hot commodity. We go through about 10 a day. And we have plenty of toys they can play with.”

Megan grew up in Roxborough and attended Saul Agricultural High School and Delaware Valley College (now University). Michelle grew up in Ocean City, Maryland, but moved to Philadelphia and attended Roxborough High School. Megan, who still lives in Roxborough, has four biological children and two step-children. Michelle, who has lived in Norristown for the last 13 years, has one daughter, “but it's like having four because she keeps me on my toes.” Megan also has two dogs and two cats, and Michelle has four dogs, two cats and one husband “who won't allow me to get more animals, but I'm trying to get a goat.”

Fairmount Bark has room in the front of the building for five cars, and they will be creating space for more in the rear. They will also be having adoption days periodically in the near future for shelter dogs in the area.