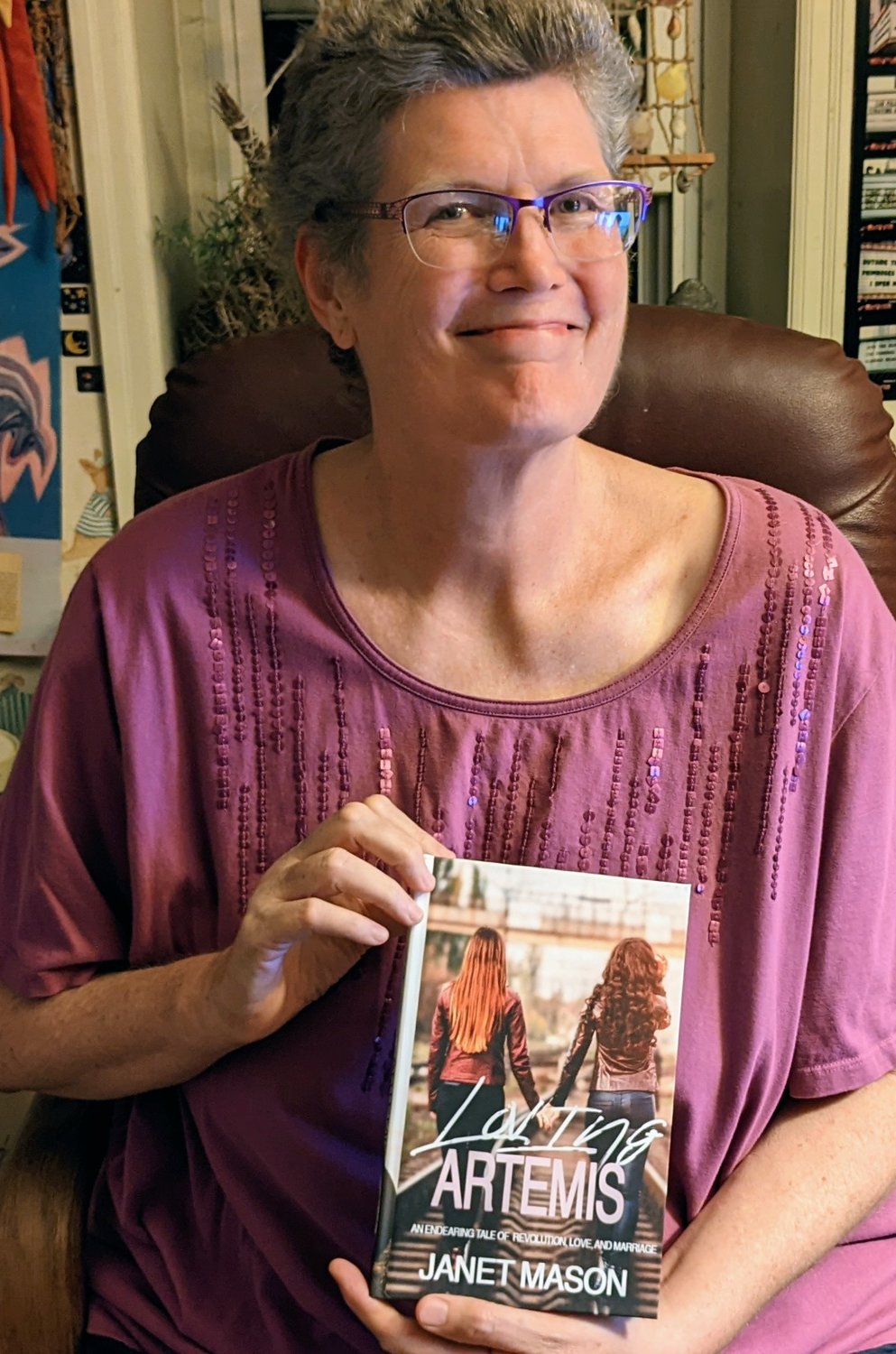 Mt. Airy author Janet Mason has done it again. Her new novel, “Loving Artemis, An Endearing Tale of Revolution, Love, and Marriage,” released last month by Thorned Heart Press in Oregon, is a labor of love as well as a story of love between two young women.

“It came out of my own life,” Mason said last week. “So you could say I was working on it for 50-plus years. As far as the actual writing, it probably added up to four or five years.”

I thoroughly enjoyed two previous novels by Mason, an award-winning creative writer, teacher and occasional blogger for such outlets as the Huffington Post. Her wonderful book, “Tea Leaves, a Memoir of Mothers and Daughters” was chosen by the American Library Association for its 2013 “Over the Rainbow List,” and it received a Goldie Award, presented annually by The Peer Choice Awards organization.

Her work also has been nominated for a Pushcart Prize, and her novel, “THEY, a Biblical Tale of Secret Genders,” was featured at the 2018 Frankfurt Book Fair. Janet is also the author of three poetry books and another novel, “The Unicorn, the Mystery.”

The reviews for “Loving Artemis” have been uniformly laudatory. Maria G. Fama, author of “The Good for the Good” writes “We are taken back in time to the turbulent late 1970s, when the Civil Rights, Gay Rights and Women's Rights Movements were making inroads into the national consciousness ... 'Loving Artemis' offers within its pages stories of romance, danger, disappointment, love and the ultimate vindication of the human spirit. This novel is very rich and satisfying and is not to be missed.”

While almost all authors aspire to write full-time, “day jobs” are usually a necessity since only a miniscule number of authors are able to pay all the bills with their novels alone.

However, Mason, a lay minister at the Unitarian Universalist Church of the Restoration on Stenton Avenue in East Mt. Airy, told us she’s been an exception to that rule.

“I have been able to devote myself exclusively to my writing,” she told the Local. “I’ve done so many other things over the years, including teaching and working for nonprofits, but … I really feel that this is the right time in my life to focus exclusively on my creative writing.”

In one of the compelling sections of “Loving Artemis,” the character of Yiayia (Greek for “grandmother”) tells Artemis, her granddaughter, how she herself had a girlfriend when she was a girl in Greece, but that her mother caught on and promptly sent her to America, where she eventually married Artemis’ grandfather.

“Yiayia is rather a salty character,” Mason said, “and I had great fun learning the Greek swear words she used, which I put into the novel. I think that Yiayia arose from my travels in Greece some decades ago and my obsession with the lesbian poet, Sappho.”

In one chapter, Grace is in high school when she goes on an acid trip and imagines that Artemis, whom she recognizes from her English class, is one of the saints.

“I spent a lot of time on Catholic.com doing research on the saints,” Mason said, “and I was delighted to learn recently that 'Loving Artemis' was selected for inclusion in an important list for LGBTQ Christians put out by the publisher of the important 'Q Spirit' newsletter.”

Mason and her partner, Barbara, have lived in Mt. Airy for almost 40 years, and there is no more enthusiastic cheerleader for the community. “It’s always been a great neighborhood,” she said, “one that been very welcoming to the LGBTQ community and one where, frankly, sexual orientation didn’t matter.”

And in recent years, she said, she’s seen another kind of inclusion.

“The young people, many with small children, tend to be liberal and have Black Lives Matter signs out along with the new-style Pride flags that include brown and black stripes,” she said. “On my block only a few of those with Pride flags are actually in the LGBTQ community. The rest are allies, which is, of course, fantastic!”

For more information, visit thornedheartpress.com. Len Lear can be reached at lenlear@chestnuthilllocal.com