John Colgan-Davis is seen with student mural artists cutting the ribbon opening Penny’s Place at the John B. Kelly School Library on Oct. 21. (Photo by Rory Cohen)[/caption] by Len Lear A beloved … 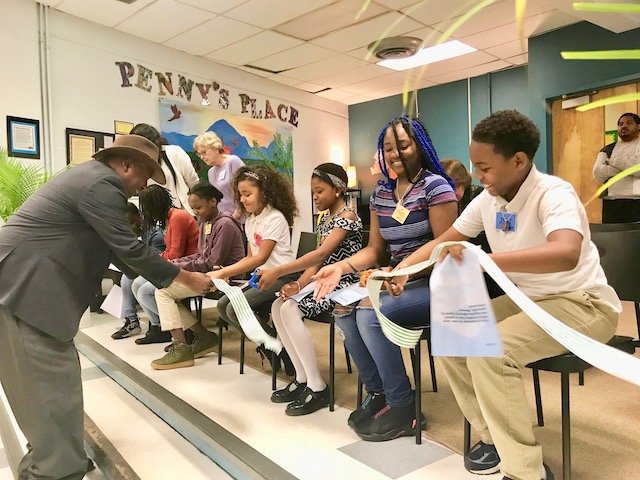 A beloved Mt. Airy educator who died last year of cancer was honored on Monday, Oct. 21, with the opening of Penny’s Place, a section of the John B. Kelly School library, 5116 Pulaski St. in Germantown. It features two murals that students helped design and paint, places for students to display their writing and places for quiet reading and study.

Penny Colgan-Davis, 72, a progressive educator who was active in the Germantown Monthly Meeting, a Quaker worship group, died on June 18, 2018, in her home of melanoma. At the time, the Philadelphia Yearly Meeting issued a statement signed by eight PYM members.

“Penny has been many places and done many things in a life of service to others as she followed divine leadings. A mentor, career teacher, school director, principal, head of school, faithful friend in Germantown Meeting and within PYM, loving daughter, spouse and mother were just some of her callings in life. As PYM Clerk, she led us in beginning to live into and embrace a new structure and corporate witness to end racism and white supremacy within and beyond PYM.

“The song ‘Magic Penny’ comes to mind. Like a ‘magic penny,’ she has touched many lives with love and spread it further and further across the earth. In each of our hearts, she will continue to do so.”

After a 48-year teaching career at several schools in the Philadelphia area, both public and private, Penny and her husband, John, a longtime public school teacher and harmonica player for the Dukes of Destiny, a popular blues/soul band, started a project in 2015 to re-open the library at the John B. Kelly public school, which had been closed for several years.

Penny got a number of volunteers together, and the library reopened that year. Volunteers weeded books, re-stocked the shelves, read to students, helped them choose books and worked with teachers in helping students do research projects.

The library was also featured in a “Brotherly Love” segment on Eyewitness News on Feb. 17, 2016. 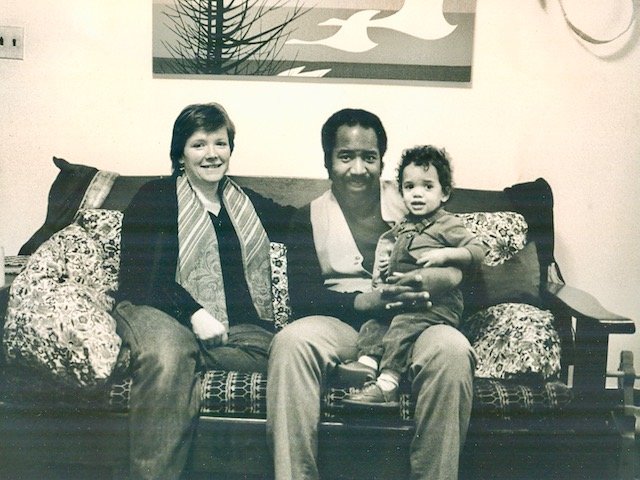 John and Penny Colgan-Davis are seen here with their son, Evan, in 1984. Evan was 2 in this photo and is 37 years old now.

“Even though the segment had Penny’s name mispronounced as ‘Peggy,’ it helped bring some new volunteers to the project,” John said, “and four years later, the Kelly School library is still going strong and is helping bring the benefits of a library to the student body of the school.”

Penny graduated in 1967 from Claymont High School in Delaware, and from Guilford College, a Quaker school in Greensboro, North Carolina.

"She combined personal faith with amazing administrative abilities that were both loving and visionary," Melissa Elliott, secretary of the Germantown Monthly Meeting, said in an earlier interview.

Penny enjoyed camping in a tent and bird watching in Arizona, Canada, New Mexico, New York and Pennsylvania. Her garden was a wildlife habitat and migration stopover for hummingbirds, butterflies and finches. John is also a nature lover who has written articles on the subject for the Local.

As a permanent reminder of Penny’s efforts, several volunteers, students and the school administration decided to create a new space in the Kelly School library and dedicate it to Penny’s memory as a “thank you” to her for opening the library.

According to Corinne Brady, Program Coordinator for the John B. Kelly Library Volunteers, “In September 2018, the principal of J.B. Kelly, Dr. Kala Johnstone, and I were in the library at the teachers’ Orientation Day. Johnstone was very grateful that Penny had come to Kelly and brought the library back to life. She said to me that she would like to do something in memory of Penny. I glanced over to the only empty section of our very big circular library, and there was the answer.

“It’s impossible to describe the impact Penny has had on the John B. Kelly school, staff, children and volunteers. It’s also impossible to describe the gratitude and affection we all feel for her. One only needs to come to visit Kelly Library on a bustling morning with students listening to stories, volunteers helping them check books out, teachers giving book suggestions, staff coming in and out, happy to help, big smiles and warm hellos as we volunteers come and go through the school, to truly understand her legacy. We now have 25 volunteers.”