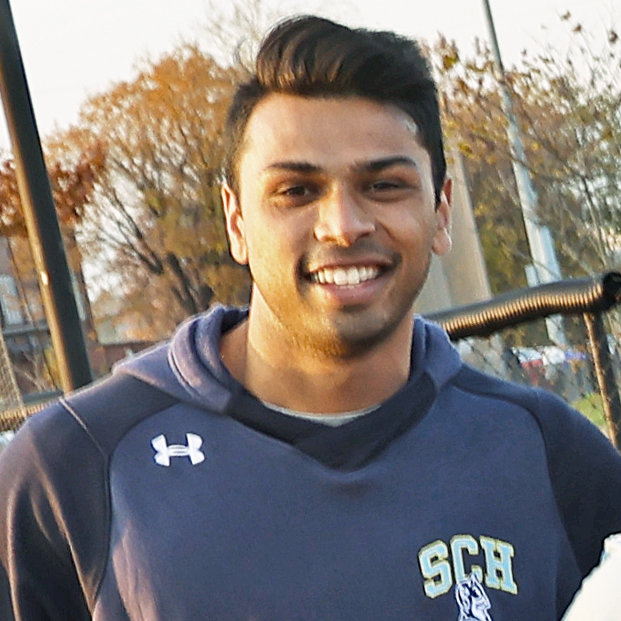 Coming out of the junior varsity program as an assistant coach in 2019 and head coach in 2020, he had seen many of this year's varsity athletes come up through the program. Like them, he was new to the varsity squad this year, helping sixth-year head coach Maria Kosmin guide the Blue Devils to an undefeated championship season in the girls' Inter-Ac League and to the championship of the Pennsylvania Independent School Athletic Association.

"A lot of girls who have come up to varsity have been with me since freshman year," Deshpande noted. "We have an older group who's been playing together a long time, and a younger group who also played together. They've been able to mesh well. Everyone competed for a starting spot and for playing time."

Outside of SCH, he also coaches a group of younger soccer players on a club team.

"I use the [SCH] team as a positive example," he said. "I explain to them how these older girls are able to move the ball, to attack and create space, and create scoring opportunities. The movement of the ball and the speed of play is at a very high level."

Deshpande was born in Mumbai, India, and lived there until he was eight, engaging very little in athletic pursuits. It was actually when his family moved to the U.S., to Maryland, that he developed a passion for soccer. A talented defender, Deshpande advanced to play on youth teams at the U.S. Soccer Development Academy.

Not being an American citizen, he was not eligible to play on U.S. junior teams in international competition. He pursued his options with India's national organization, and ended up playing for India at the 2017 FIFA Under-17 World Cup.

Back in the U.S. later on, he earned an undergraduate degree in computer science at Drexel University, and he's now working toward a graduate degree there.

After his several years spent coaching with the SCH junior varsity soccer team, he was familiar with the school and many of its players, but he had not worked directly alongside Coach Kosmin.

"It worked out really well," he said, "because I used to be a defender and liked working with them, while Maria was more oriented to working with the attackers. We also have a very similar coaching style. We're not the type of coaches who yell and scream and are super loud. Being a little more laid-back works well here. These girls are smart and they pick things up pretty quickly."

It also helped that the players were fired up for a full season of soccer after being limited to five games in 2020.

Due to COVID, Deshpande observed, "They felt like they'd lost a season of soccer. This season they came in really ready to go. Already in preseason, almost everyone was in better shape than I've seen them before."

He also admired the way that Kosmin oversaw the program.

"She brings 100 percent of her energy to every game and every practice," he said. "She can pick out little adjustments that a player can make to refine her game. She studies on her own, reviewing other teams and developing a game plan for every opponent. She's one of the most prepared coaches I've worked with, for sure."