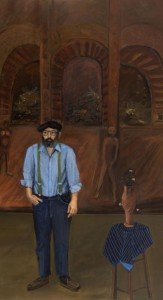 Celebrating a close-knit group of Philadelphia artists who have been meeting regularly for decades to play cards and share ideas about life and art, Woodmere Art Museum’s new exhibition, “The Poker Game and Its Circle,” which opens this Saturday, July 20, and runs through Oct. 26, marks the 50th anniversary of the longstanding local tradition and showcases the diverse work of the game’s participants and others from their social circle.

The exhibition presents 30 to 40 pieces of art created by the men depicted in Day’s 1970 portrait, “The Poker Game,” and their compatriots, including Charles Kaprelian, Mitzi Melnicoff, Leonard Lehrer, Ruth Fine, Eileen Goodman and Doris Staffel.

“Woodmere’s mission is to celebrate the art and artists of Philadelphia, and 'The Poker Game and Its Circle' is a snapshot of a distinct part of the art scene of our city in the late 1960s and early 1970s,” said William R. Valerio, the Patricia Van Burgh Allison Director and CEO of Woodmere Art Museum, 9201 Germantown Ave. in Chestnut Hill.

Also on view at Woodmere this summer, in the Helen Millard Children’s Gallery, are artworks created by Philadelphia schoolchildren in tribute to Martin Luther King Jr.’s “I Have a Dream” speech. “The Dream at 50: A Tribute to MLK” (Aug. 25-Oct. 20) displays works that were selected as semifinalists in a national art competition to commemorate the 50th anniversary of King’s famous speech; the competition was part of an ongoing global celebration. (For more information, visit thedreamat50.com.)

There will be a free gallery talk about the new exhibit this Saturday, July 20, 3 to 4 p.m. Join Armand Mednick, an artist pictured playing poker in “The Poker Game,” for an informal talk about his work and friendship with Larry Day. Mednick, a ceramist sculptor who is also a Holocaust survivor, taught art for almost 50 years at the Oak Lane School in Blue Bell and recently retired from the Allens Lane Art Center, where he taught the visually impaired to use the potter’s wheel.

There will also be a free gallery talk, “The Poker Game,” on Saturday, Sept. 28, 3-4 p.m. Ruth Fine will discuss the work of her late husband, Larry Day, and his painting. Fine recently retired from the National Gallery of Art, Washington, D.C., where she held several posts, the last as Curator of Special Projects in Modern Art.

Larry Day was born Lorenzo del Giorno in Philadelphia. He lived and worked out of a three-story twin house in suburban Cheltenham that his family moved to when he was 12 years old. He attended Temple University’s Tyler School of Art under the GI Bill after serving in WWII and fighting in the Pacific campaign. He was a professor of painting at Philadelphia College of Art (now the University of the Arts) from 1953 until 1988 and served for several years as the chair of the painting department. He died in 1998.

Armand Mednick, who will speak about the 'Poker' exhibit this Saturday, was born in 1933 in Brussels, Belgium, to Yiddish-speaking parents. His family escaped the Holocaust by posing as Christians for four years in Volvic, France, and eventually leaving in 1947 to join relatives in the Philadelphia area. Mednick was a beloved teacher of ceramics for 50 years at Oak Lane Day School in Blue Bell. For more than 40 years, Mednick has continued to play the monthly Sunday poker game depicted by Larry Day in 1970.

David Pease, the only other member of the poker-playing group who is still alive, received B.S., M.S. and M.F.A. degrees from the University of Wisconsin, Madison. He was an instructor at Michigan State University from 1958-60. In 1960, he became an instructor and was appointed assistant professor at Temple University's Tyler School of Art later that year. He became the chair of the painting department in 1966.

Housed in a 19th-century stone Victorian mansion on six acres, Woodmere Art Museum first opened its doors to the public in 1940. The building, grounds and the nucleus of the Permanent Collection are the benefactions of Charles Knox Smith (1845 – 1916), who wished “to awaken the spirit of, the appreciation of, and the knowledge of art … in the City of Philadelphia and surrounding territory.” Today, the permanent collection consists of more than 3,000 works of art by Philadelphia area artists.

Preregistration to all lectures is suggested, as space is limited. A wine and cheese reception follows all lectures and gallery talks. For more information, visit woodmereartmuseum.org/lectures or call 215-247-0476.