EMAN says residents were getting outnumbered on zoning votes by people who don’t live on their side of Germantown Avenue. 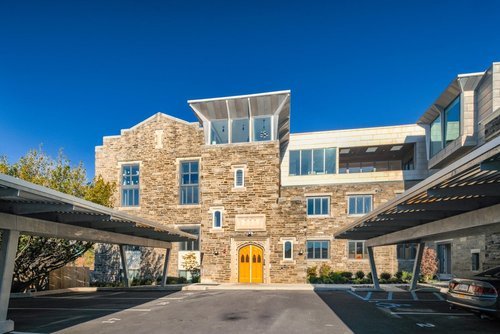 The Lantern Theater Company is planning to expand into this former Presbyterian Church at 7111 Germantown Ave. at the corner of Germantown and Mt. Pleasant Avenues in East Mt. Airy.
Posted Wednesday, May 11, 2022 6:00 am
by Tom Beck

They did it, they say, because residents were getting outnumbered on zoning votes by people who don’t live on their side of Germantown Avenue and have financial interest in the projects.

“This decision was about equity,” EMAN board member and zoning chair Antoine Joseph said. “We felt that the neighbors weren’t getting an equitable say in what’s happening in their neighborhood. We want to include them and not box them out.”

EMAN’s new policy is a point of contention with some members of Mt. Airy’s other two groups that can vote on zoning issues - a fact which has thrown a wrench into their collaborative effort to find a comprehensive parking solution for Mt. Airy’s commercial district.

There are three Registered Community Organizations in Mt. Airy - EMAN, West Mt. Airy Neighbors (WMAN) and the Business Improvement District (BID). All three have a say over zoning issues, and until last month all three had traditionally allowed anyone who showed up at a zoning meeting to vote.

“I've committed myself to East Mt. Airy for my entire business career,” he added. “The idea that I should not get a vote at an RCO meeting is really off-base. You don’t solve anything by telling people they don’t have a vote.”

“The people I know who are business people have a long history of making a dramatic and positive impact in the community,” he said. “I do not understand the rationale for putting [non-resident business owners and non-resident property owners] in a different category from a guy who moved in a year ago and is concerned about his parking spot in front of his house. As neighbors, we might have different priorities, but we all have to be one community if we’re going to accomplish anything positive.”

Developer Ken Weinstein, chair and co-founder of the Mt. Airy BID and president of Germantown-based Philly Office Retail, which was formerly located in Mt. Airy, said it “did not feel very good” to be excluded from the community he’s run his business in for decades by a local community group.

“I think it’s a misguided policy to exclude members of our community from voting,” Weinstein continued, “and I seriously hope that EMAN reconsiders its mission.”

Joseph said the civic group previously had no rules for who could vote - which meant that anybody, theoretically, could show up to a meeting and vote on a development proposal even if they didn’t live in the neighborhood.

This created problems, he said, because nonresidents who have a financial interest in developing the neighborhood were voting in meetings and skewing the vote in their favor.

“We had been noticing in our recent variance meetings that a lot of the votes were getting heavily-weighted [toward] developers and people who don’t necessarily live in the neighborhood,” Joseph said. “Our neighbors were saying that they felt their voices were being drowned out.”

Joseph said that preventing nonresident business owners and nonresident property owners from voting isn’t exclusionary because both of the other two organizations can share their opinion on any Mt. Airy development proposals with the Zoning Board of Adjustment.

“They can write their own letter to the ZBA,” Joseph said. “Our number one priority is the actual residents. If we don’t prioritize them, then they have no one prioritizing them. The BID prioritizes businesses.”

But, “that’s not how it's supposed to work,” Weinstein said in response. A developer, he continued, should only have to meet with one community group when seeking a variance “so there isn’t a lot of time and effort wasted.”

Their votes are important, because the ZBA takes the positions of civic associations into account when making decisions about whether to grant a variance when developers request them.

With EMAN’s new voting policy, only the opinions of East Airy residents and the project’s near neighbors (people who live within a 250-foot radius of the proposal) will be reflected in their decision.

Some members of WMAN and the BID have questioned whether the policy is legal. But Bruce Bohri, a spokesperson for the city, told the Local that it is.

“EMAN can make their own rules around voting in their meetings,” he said. “Our general guidance for RCOs is that voting procedures should be clearly communicated (ideally reflected in their RCO bylaws) and consistently followed.”

Because the Planning Commission doesn’t require RCOs to report their rules around voting procedures, Bohri couldn't say if any other RCOs restrict nonresident business owners or nonresident property owners from voting in meetings, or whether it is a common practice.

The hearings held by the Zoning Board of Adjustment, he added, are open to the public and any member of the public, however, including nearby property and business owners.

The division created by EMAN’s new policy has resulted in a delay of the coordinated effort between Mt. Airy institutions to combat parking issues in the neighborhood.

"We put a pause on that discussion so that we could focus on how the BID and EMAN and [West Mt. Airy Neighbors] are going to work together," said Weinstein, who has been integral in the parking initiative.

Elfant said he “lost [his] appetite” for working collaboratively on the parking issue after he was informed of EMAN’s new policies. That being said, he still hopes EMAN reverses the policy and welcomes nonresident business owners and property voters into its voting process.

“These people are volunteers,” he said. “Nobody’s getting paid big bucks for this, and their heart and soul is to do good by the community, but I think they’re wrong in this case.”

Weinstein said his company has “really enjoyed working with EMAN in the past.”

“We hope,” he said, “that we can work with them again in the future.”

Correction: The print version of this story incorrectly identified Elfant's position with Elfant Wissahickon. The mistake has been corrected in the online version.