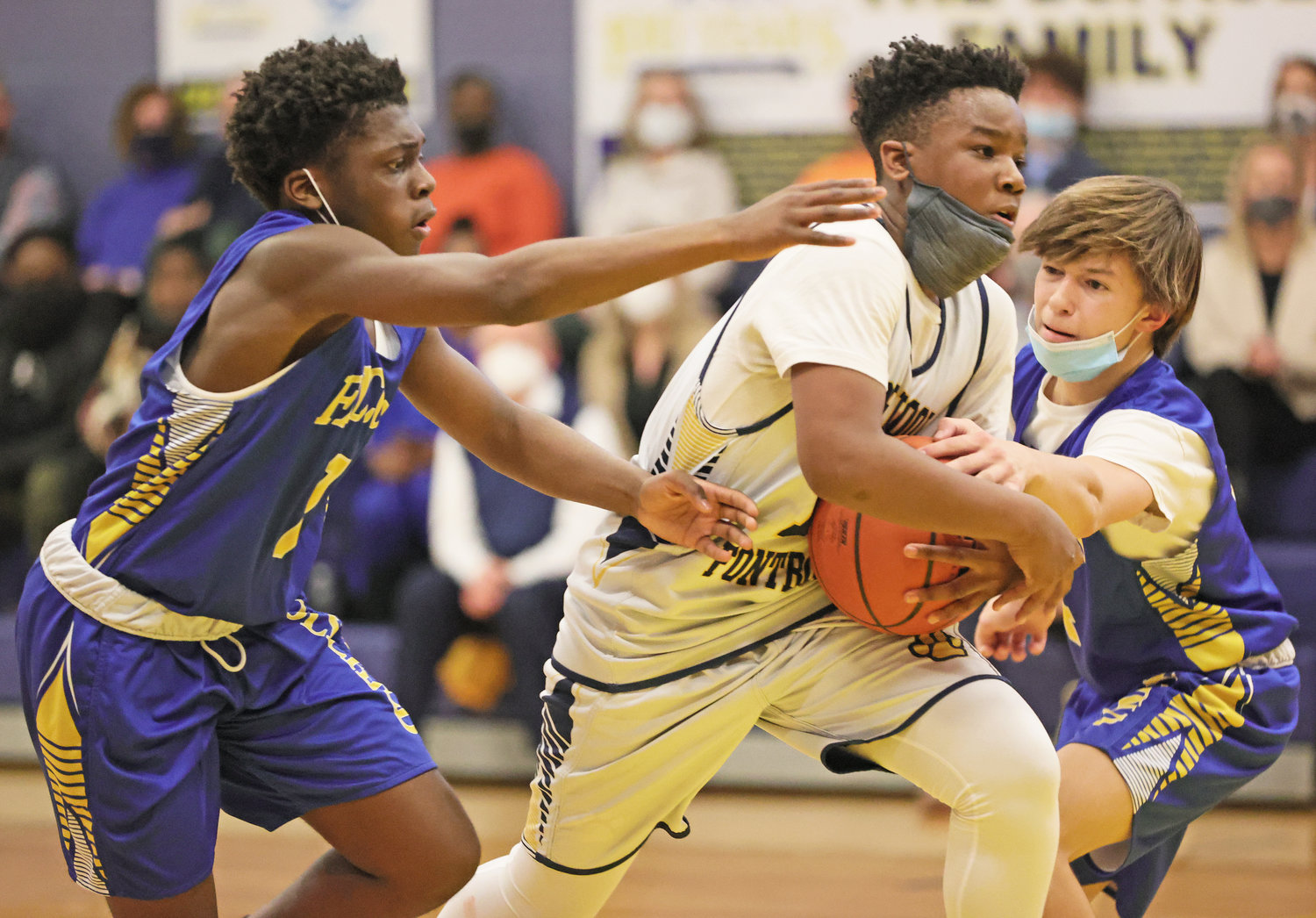 Matt Johnson of the Norwood Bears (with ball) looks like a football running back bursting through the line as he charges past a pair of Holy Child Falcons. Photo by Tom Utescher
Posted Thursday, February 10, 2022 6:00 am
by Tom Utescher

In a home basketball game last Thursday, the boys of Norwood Fontbonne Academy pulled into a tie for first place in the Catholic Academy League with Holy Child School from Rosemont, Pa. The Bears' 47-42 victory last week avenged an earlier loss in overtime to the Holy Child Falcons.

NFA's record improved to 7-1 in the league and 7-2 overall, while the visitors went back to the Main Line at 5-1, 10-3. Norwood secured first place for the league tournament by winning a coin flip over Holy Child, while another strong team, Waldron Mercy Academy, placed third.

For the first regular-season game between Norwood and Holy Child, the Falcons were missing one of their stronger players, Kameron Carson. He was back in the starting line-up for last week's rematch, though.

In the opening quarter the visitors accumulated most of their points from four field goals, while the Bears shot five-for-six from the foul line. The teams were tied at 9-9 near the end of the period, but with less than 20 seconds left NFA's Kellen Toussaint scored a 15-foot jump shot from the right wing to give the home team an 11-9 lead.

Midway through the second round Norwood was still up by two, 15-13. Jamil Abdul-Malik of the Falcons traded three-pointers with John Weaver of the home team, and Holy Child also scored a lay-up in transition. As the final minute of the half began, the visitors edged ahead, 19-18, when Aasim Mitchell made the second of two shots from the foul line. NFA came down the floor and had Matt Johnson drive right in for a lay-up.

Holy Child missed at the other end, and the Bears scored the last bucket of the half, a three-pointer, when Ethan Smith let fly from the top of the key. Norwood now had a 23-19 advantage for the intermission, when forward Brendan Flaherty had six of his team-high 12 points in the book.

Smith and William Lesovitz would each score eight of their 11 total points during the second half.

Norwood led by seven points two times during the third quarter, but Holy Child was only down by three at the end of the period (36-33). Early in the fourth frame, Carson's jumper from the lane for the Falcons cut the lead to a single point. It was still a one-point affair (43-42) going into the final minute.

The Falcons stole the ball and Norwood stole it back, and a foul by the visitors brought up a one-and-one for the Bears. The first free throw missed, but after Holy Child grabbed the rebound, NFA's Lesovitz stole the ball and put in a lay-up. He missed a free throw awarded on the play, but the home team still led, 45-42, when the Falcons called time-out with 19.6 seconds left.

After the Bears' Johnson blocked a three-point attempt by Holy Child, the Falcons recovered the loose ball and then missed another shot from the three-point line. This time, Kyle Etkin grabbed the defensive rebound for Norwood, and when he was fouled he scored the last two points of the game from the free throw line with eight seconds remaining.

One final three-point shot by the visitors missed the target, and Etkin corralled the rebound to run out the clock. Johnson finished with six points for the afternoon, Weaver had three, and Etkin and Toussaint each scored two.

Leading the Falsons were Abdul-Makik, with 15 points, Jack Rischitelli, with eight, and Mitchell, with seven.