This week marks the 90th anniversary of Norwood-Fontbonne Academy, a Chestnut Hill institution. Over those past 90 years, Norwood-Fontbonne Academy has grown from a small school for boys into a co-educational, preparatory academy for children pre-school through eighth grade, but the Academy’s mission and vision has changed little throughout its history. 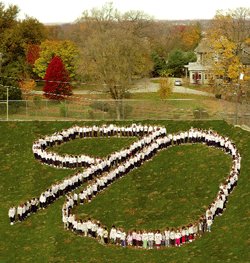 Students at Norwood assembled on one of the school’s play fields to mark the school’s anniversary.
Posted Tuesday, November 23, 2010 10:18 pm
by Paula M. Riley

This week marks the 90th anniversary of Norwood-Fontbonne Academy, a Chestnut Hill institution. A sponsored work of the Sisters of Saint Joseph, the school first opened its doors in 1920 as Norwood Academy, a boarding school for boys.

Over those past 90 years, Norwood-Fontbonne Academy has grown from a small school for boys into a co-educational, preparatory academy for children pre-school through eighth grade, but the Academy’s mission and vision has changed little throughout its history. Today, NFA students will tell you the Academy’s vision: A Norwood-Fontbonne student enjoys learning, treasures self, others and earth, lives Gospel values and makes reflective choices as self-directed person.

“Norwood-Fontbonne Academy has a rich legacy of creativity, ever renewing its commitment to the education of young people,” explained Sr. Mary Helen Beirne, head of school.

Throughout the school year, the NFA community will celebrate its rich history. At the school’s seasonal Liturgies, students offer reflections and prayers honoring those who have come before them and challenging themselves to fully live the vision of the academy each day.

Each NFA event this year, such as Grandfriends’ Day, Christmas Tea, Athletic Awards Night and Recognition Assemblies, will include tributes to the school’s history. A 90th Anniversary Celebration Gala is planned for Feb. 26th at Manufacturer’s Country Club where NFA families, staff and alum will enjoy a festive evening of dinner and dancing.

Alumni are coming together in the newly founded Alumni Association with special events for the greater alumni community as well as alumni celebrating milestone anniversaries. With each celebration, the academy leadership hopes to deepen the NFA community’s knowledge of Norwood-Fontbonne’s rich history.

This history speaks of academic progress and physical growth that began with the arrival of the Sisters at Chestnut Hill in the 19th century. In 1858, the Sisters took ownership of “Monticello,” a former residence of the Middleton family and the eventual site of Chestnut Hill College. They immediately established Mount Saint Joseph Academy, a boarding school for girls that operated under the same roof with their novitiate and motherhouse at 9701 Germantown Ave. Later, in 1875, the Sisters purchased the adjacent Bullit farm, which provided the growing school with 22 acres of future building space.

St. Joseph’s Seminary for Little Boys opened in the 1870s in the Sisters’ convent. In 1919, the Sisters purchased the seven-acre country residence of Reed A. Morgan, situated one mile south of the convent on Germantown Avenue. This 21-room stone mansion built in 1852 was first named “Hillcrest” because of its location on the northern slope of Chestnut Hill. A subsequent owner renamed it “Norwood,” and when the Sisters purchased it, Norwood Academy for Boys housed 48 boarders, 6 day students and 9 sisters.

In 1924, girls in grades first through sixth studying with the Sisters at Mount Saint Joseph Academy were moved to Fontbonne Hall at 9001 Germantown Ave. This was named for Mother St. John Fontbonne, who helped reestablish the Sisters of Saint Joseph after the French Revolution. A seventh and eighth grade were added in the early 1940s.

Always focused on creating an interactive learning environment s for children, the Sisters were seeking an innovative approach to education, and in the late 1960s and early 1970s, they introduced the Maria Montessori philosophy into newly created preschools at the boys and girls academies. The Montessori Method stimulates children at an early age to have a love for learning by providing a prepared environment with precise materials a child can explore.

Fontbonne and Norwood Academies merged into the co-educational Norwood-Fontbonne Academy in 1973, offering a Montessori preschool, a junior Montessori program for grades 1-3 and a parallel program with creative interactive classrooms for kindergarten through eighth grade. Following the merger of the two academies, the academic, social, spiritual and service programs grew exponentially.

One of the first local academies to become accredited by the American Montessori Association and Middle States Association of Colleges and Schools, NFA continuously explored new and challenging programs to meet the academy’s mission. Created in the 1980s, the Integrated Service Learning Curriculum is a fully integrated service program in which students in grades 1-8 engage in meaningful activities at various service-learning sites.

A different, age-appropriate service-learning site is visited by each grade. Some of these sites are St. Joseph’s Villa, Archbishop Ryan School for Hearing Impaired Children, St. John’s Hospice and Holy Name School in Camden.

“Service learning has been a tradition at NFA,” explained Will Dennis, director of campus ministry. “Our service-learning curriculum sets us apart and puts an emphasis on the education of young men and women to recognize social injustice, to treat its marginalized members of society with compassion and to courageously act, in large and small ways, to bring about changes that will swing the balance from the unfairness to justice.”

In 2006 Norwood-Fontbonne Academy broke ground for major additions on both campuses. On the Norwood campus (Germantown Avenue) the new additions include classroom renovations, a new two-story classroom wing, outdoor classroom and a high-tech science laboratory.

On the Fontbonne campus (Sunset & Norwood Avenues) the renovations included the addition of The Commons, a multi-purpose building where the entire campus enjoys a gathering space for Liturgy, stage productions and dining, along with a native plant garden.

Beirne explained that these improvements enhance the environment at NFA where students in all grades are challenged with a rigorous and relevant curriculum. NFA offers more than 30 co-curricular opportunities for students to further nurture their individual passions and imaginations in areas of art, drama, sports, technology, writing, math and science.

She boasts that 61 percent of the NFA seventh and graders have been recognized as a John Hopkins Scholar. This achievement is awarded to those who have scored at the 95 percent level or higher on one or more areas of a nationally standardized test.

“Each day our strong academic and co-curricular accomplishments energize us for our present and strengthen us for our future,” Beirne said. “NFA will continue to form young men and women who will bring God’s unity to global society.”

NFA alumni who are interested in receiving more information about the alumni association should contact Stephanie Belzer, director of institutional advancement, at 215-247-3811, ext. 207.