Not a household name, but maybe Lou Walinsky should be

Walinsky, a Mt. Airy resident for 23 years who has a new album out, will be performing in concert at Germantown’s Settlement Music School branch, 6128 Germantown Ave., on Sunday, June 3, 2 …

Not a household name, but maybe Lou Walinsky should be 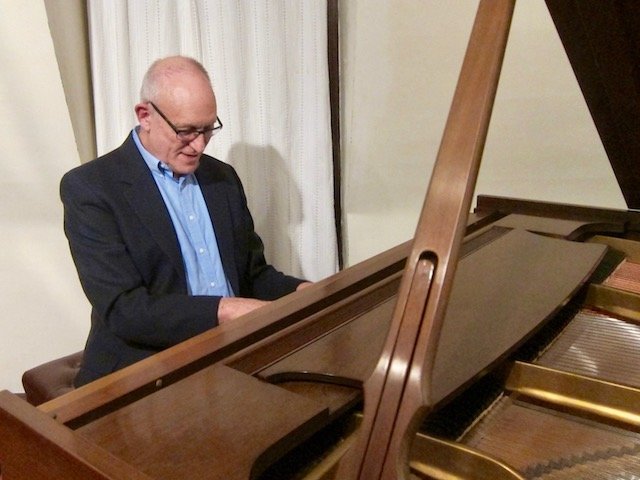 Walinsky, a Mt. Airy resident for 23 years who has a new album out, will be performing in concert at Germantown’s Settlement Music School branch, 6128 Germantown Ave., on Sunday, June 3, 2 p.m.[/caption]

Lou Walinsky may not be a household name, but when you hear him play “It Don't Mean a Thing if it Ain’t Got That Swing,” by Duke Ellington, on the piano, you can’t help but wonder why.

Walinsky, 73, who has lived in Mt. Airy for 23 years (and in Germantown for 17 years before that), will be performing in concert at the Germantown branch of the Settlement Music School, 6128 Germantown Ave., on Sunday, June 3, 2 p.m. He also has a new album.

“This is my second solo piano album,” Walinsky said last week. “The first one was produced in 1995, after which I gave a few concerts and soon thereafter developed carpal tunnel syndrome. It took a long time to recuperate from that and to be able to get back to full fledged playing without any technical limitations. That's a big part of the reason for the generational gap between the two CDs.

“After competing my first album in 1995, I did two concerts at the Kennedy Center's Millennium Stage in D.C. I got a kick out of playing my music to people visiting from all over the country and the world and getting a very enthusiastic reception. That was my favorite performance of all time.”

Walinsky has a long list of laudatory testimonials for his concerts. For example, a Music Department Head at the Central Free Library wrote, “Your solo piano program, ‘Piano Works,’ was wonderful. A large audience enjoyed your eclectic repertoire that included well-known music from jazz, popular, ethnic and folk music genres. Your creative arrangements of familiar tunes presented them in ways that delighted and surprised listeners. Your relaxed introductions and commentary about the music communicated your enthusiasm for your art and established an excellent rapport with the audience.”

A native of Wynnefield, Lou went to Akiba Hebrew Academy and graduated from Temple University in 1967 with a major in psychology and a minor in music. He also took music and music education courses at Chestnut Hill College, which allowed him to get his state teaching certification and teach music in public schools.

He taught general music and conducted choirs at elementary and middle schools over the course of 14 years in the system. He taught at Houston School in Mt. Airy and four more schools in other parts of the city.

How does Lou feel about the fact that most public schools now have no music education? “From what I understand,” he replied, “the situation with music in the schools has started to turn around in recent years. (I've been away from it since 2004.) While music and art education is still not back to where it had been previously, I hear that there has been a widespread clambering by parents to bring the arts back into the schools…

“So, according to friends I have in the Philly schools, most schools do provide some type of music education, though not nearly enough. Of course, it was a truly foolish idea to think that children don't need music and the arts.”

For many years Walinsky would put together ensembles ranging from duos to quintets with drummers, horn players and vocalists, depending on what the particular gig called for. In recent years, he had a jazz ensemble that included sax player Pete Souders, drummer Paul Albrecht, bass player Andrew Morris and vocalist Lynda Benedetto. He was also part of the original Goldene Medina Klezmer Ensemble and in Poughkeepsie, New York, he would improvise music on the piano to match what was occurring dramatically on stage at that city’s Playback Theatre.

How hard is it to make a living as a full-time musician? “It's really quite easy,” he said. “Just kidding! Look, a long time ago I decided that it was important for me to focus on playing music that I found soulful rather than doing music that would be more of a sure fire money maker.

“That meant I needed day gigs, so at various times I also taught in the schools, have done music programs for kids and for seniors, and even had a music and storytelling program that I did for young children throughout the area. And throughout my adult life, I have taught piano.”

Walinsky also wrote about 25 or 30 songs in the 1970s and ‘80s but subsequently grew more interested in developing his piano playing, improvising and arranging skills and began concentrating on that. Of the songs he wrote, his favorite is “Love and Fear.” That’s because “I played it for my wife-to-be the first time we met at a party, and not long afterwards we became soul mates. So I have a very personal association with the song.”