Vincent Dubois, one of the three organists at the Roman Catholic Cathedral of Notre Dame in Paris, made a much-appreciated stop in Philadelphia to present a solo organ recital. 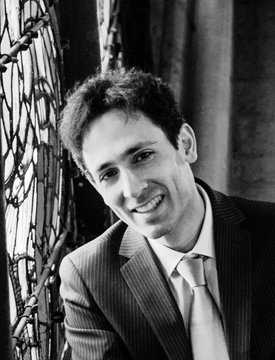 Vincent Dubois, one of three titular organists at Notre Dame Cathedral in Paris, performed a solo organ recital on Oct. 30 in the Bryn Mawr Presbyterian Church.
Posted Thursday, November 10, 2022 12:00 am
by Michael Caruso

Vincent Dubois, one of the three organists at the Roman Catholic Cathedral of Notre Dame in Paris, made a much-appreciated stop in Philadelphia to present a solo organ recital on Oct. 30. Despite the events of the day, which included a home game by the still-undefeated Philadelphia Eagles that started at 1 p.m., Dubois drew more than 400 lovers of organ music for his 2 p.m. performance in the Bryn Mawr Presbyterian Church.

Dubois played an announced program of Johann Sebastian Bach’s Prelude and Fugue in E-flat, BWV 552, Cesar Franck’s Chorale No. 2 in B minor, “Dance Macabre” by Camille Saint-Saens and Maurice Durufle’s Suite, Opus 5. The recital’s finale was his spontaneous improvisation on “Take Me Out to the Ball Game,” a theme presented to him on-the-spot by Jeffrey Brillhart, the church’s internationally-acclaimed music director, organist and choirmaster.

Despite Bryn Mawr Presbyterian Church’s Rieger 2005 pipe organ having been built in the style of mid-19th century French cathedral instruments, its 59 stops and 89 ranks contain within them at its core a baroque organ that can easily handle the works of Bach. The German composer is not only the supreme master of the organ repertoire but is most frequently considered to be the greatest classical composer of all time.

His Prelude and Fugue in E-flat is a prime example of his genius. Its opening movement is a fantasy of inspired lyricism and freewheeling counterpoint while the fugue combines a plethora of themes delineated according to the strictures of the purest contrapuntal requirements.

Dubois caught both movements’ imaginative counterpoint at the heart of its dazzling sonic pyrotechnics.

Once into the romantic French repertoire, he made every conceivable use of the Rieger’s panoply of registrations to proffer the menacing darkness of the Franck, the taunting delight of the Saint-Saens, and the tart dissonances of the Durufle. Throughout all four works, he displayed a prodigious memory, sparkling finger work and deft playing at the pedals. More important, he projected the musical essence of each piece through interpretations that were both potent and expressive. And his improv was as breathtaking as it was engaging.

One might be a tad surprised to learn that an organist of a French Catholic cathedral such as Notre Dame would choose a Presbyterian church as a venue for his recital. However, Bryn Mawr Presbyterian boasts one of the region’s few pipe organs that’s in world-class condition, it seats nearly 1,000, it’s accessible to all forms of transportation, and it could very well be greater Philadelphia’s most stunning example of the Norman Gothic Revival style of architecture, a virtual cathedral along the Main Line. It was the one and only choice.

Matthew Glandorf and Choral Arts Philadelphia will perform Heinrich Schutz’s “Musikalische Exequien” Saturday, Nov. 12, at 4 p.m. and Sunday, Nov. 13, at 3 p.m. The first concert will be given in the Episcopal Church of the Holy Trinity, Rittenhouse Square; the second is scheduled at the Episcopal Church of the Good Shepherd, Rosemont, where Glandorf is music director.

Glandorf explained, “To understand the greater ethos of the music in this concert, one must first examine the attitudes about life, death and eternity from the perspective of Protestant Germany. Martin Luther, who rejected the sale of indulgences and, thus, the ability to buy salvation, also condemned the idea of purgatory, or the place of preparation for the soul before it enters heaven. Death was not to be feared but accepted as the reward for the person of faith’s arduous journey through life.”

Setting the context of the 16th and 17th centuries in which Schutz composed his work, Glandorf referenced the warfare, poverty and endless epidemics that were the common coinage of daily life.

Continuing, Glandorf said, “Schutz is considered the most important composer prior to Johann Sebastian Bach. Born in Kostritz, he spent two extended periods of study in Venice, first with Giovanni Gabrieli and later possibly with Claudio Monteverdi, bringing the unique and glamorous Venetian polychoral and instrumental traditions to northern Europe. He spent the great majority of his career as the court composer to the Prince Elector of Saxony in Dresden.”

In 1635, Schutz’s friend, Count Heinrich Reuss, posthumously commissioned Schutz to compose music for a German-language burial service. Reuss himself compiled the libretto, drawing on selections from Luther’s German translation of the Bible. Two centuries later, Johannes Brahms would follow in Schutz’s tradition by composing his own “German Requiem” upon the death of his mother. Many consider it to be Brahms’ towering masterpiece.