A host of Northwest Philadelphia neighbors have banded together to help an 8-year-old girl from Ecuador receive the necessary medical attention she needs. 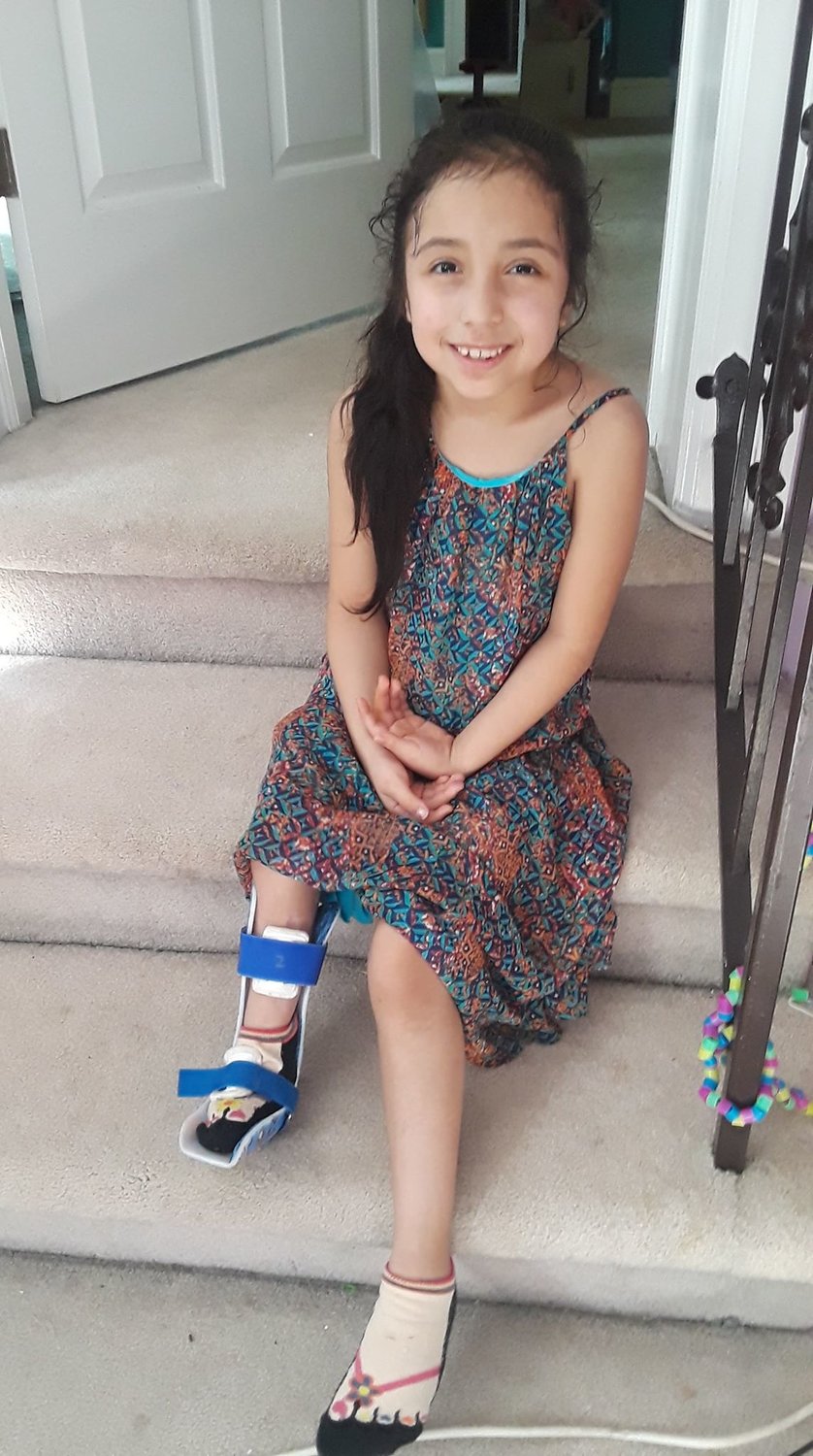 Jhoselyn relaxes on the front steps where they are living at Sandra Cohen's home at Leamy House in Mt. Airy. 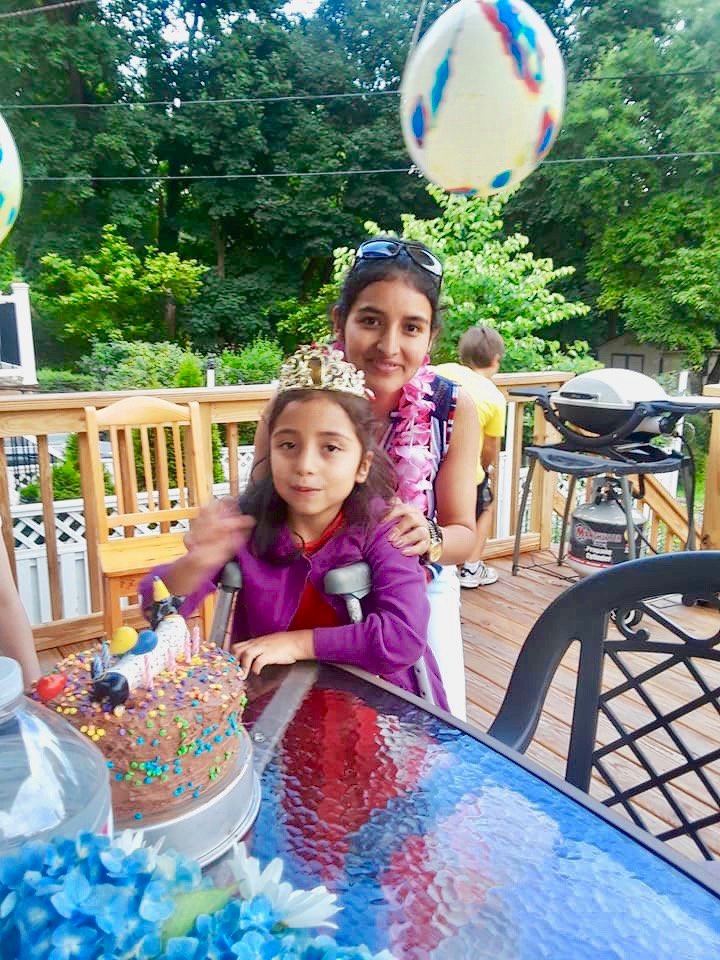 Jhoselyn and mom Narci are seen at Jhoselyn's 7th birthday party on June 30, 2019, just one month after arriving in the U.S.
Previous Next
Posted Monday, December 28, 2020 1:39 pm
by Barbara Sherf

A host of Northwest Philadelphia neighbors have banded together to help an 8-year-old girl from Ecuador receive the necessary medical attention she needs in order to avoid a lifetime of gnarly daily enemas.

It all started when Chestnut Hill resident Debbie Carr received word from friends in Ecuador that little Jhoselyn Abigail Calderon Correa and her mother, Narcisa (“Narci” for short), 32, were on their way to the U.S. Their travels had already taken them from a small village in the Andes Mountains to the capital of Quito for medical care and then to Philadelphia. After six years, Jhoselyn was about to receive the orthopedic care she needed, thanks to the generosity of Shriners Hospital for Children.

So, what is the connection with Chestnut Hill? Carr and her husband Doug are serious birdwatchers who have traveled to Ecuador for the past four winters to volunteer as guides at the bird reserves of the Jocotoco Foundation. Carr explained that “the cook at a reserve contacted us after we got home, asking if we could help a mother and daughter who were arriving in the U.S. in a few days. When I met them, I was captivated by the bravery of this little girl who had been through so much but who embraced life with a joy that was infectious.”

Carr took the next step to create a match between Jhoselyn's needs and the generosity of the Chestnut Hill Quaker Meeting. “It was perfect for us and them,” said Carr, who has rallied members of the Meeting to the cause. “People started sending me checks, sometimes even handing me cash, and donated clothes and stuffed animals for Jhoselyn.”

Next to step into the picture was Mt. Airy resident Sandi Cohen, who opened up the second floor of her condo to the mother and daughter in June of 2019. And the arboretum-like setting of her home was a special bonus for Jhoselyn when she needed space to play.

“Every day I thank God for bringing these two angels to be with me,” said Cohen. “Jhoselyn dances and sings and says she's going to be President of Ecuador someday. Despite 34 operations, she's happy and a delightful person to be with, as is her mom.”

Next to step in was Cohen's neighbor, Janet Rubien, who described Jhoselyn as “the most spirited, resilient, bright and compassionate little girl I've ever met.” Rubien also happens to tutor a young boy, Roberto, who is bilingual. It did not take long after Jhoselyn and Roberto met for them to begin teasing each other as only 8-year-olds can do.

After learning about Jhoselyn's medical condition, Rubien set up a GoFundMe campaign to cover the costs for Jhoselyn's next surgery at Children's National Hospital in Washington D.C. The surgery will require a team of experts to address Jhoselyn's complex internal issues. Rubien stated, “Jhoselyn and her mother have sacrificed everything, leaving their home, husband and father and large extended family to come to a place where they did not know a soul or speak a word of English.”

The GoFundMe campaign, whose goal is to raise $110,000, has raised $20,000 so far with 200 individual donors from around the U.S. Friends and family in Ecuador have also sent what they can to join the “village” of support in Northwest Philadelphia. In addition, an orthopedic surgeon from Erie, PA, contributed a significant amount to Children's National Hospital for the planned surgery.

Jhoselyn is currently enrolled in virtual classes in third grade at Cook-Wissahickon Elementary School in Roxborough. When she enrolled at the school in September of 2019, she did not speak any English. After just three months, she was fluent in English, and today she served as translator for the interview with her mother at Rubien's home.

Before her last surgery in October, which resulted in a full leg cast, Rubien, Correa and Jhoselyn went to the beach along with dog Dewey and Rubien's husband, Edward Thomas. It was such a joy to watch Jhoselyn run free from physical limitations for a few hours, according to Rubien.

Narcisa Correa, who has five brothers and four sisters and runs a small family farm with her husband, insisted that “I am so very grateful for all who have helped us here in the U.S. as well as the people who helped us come here from Ecuador. They have all been so generous.”