The Gothard Sisters, Greta (from left), Willow and Solana, will bring their contemporary Celtic sound to Pastorius Park next Wednesday night in the park’s final concert for this season.[/caption] … 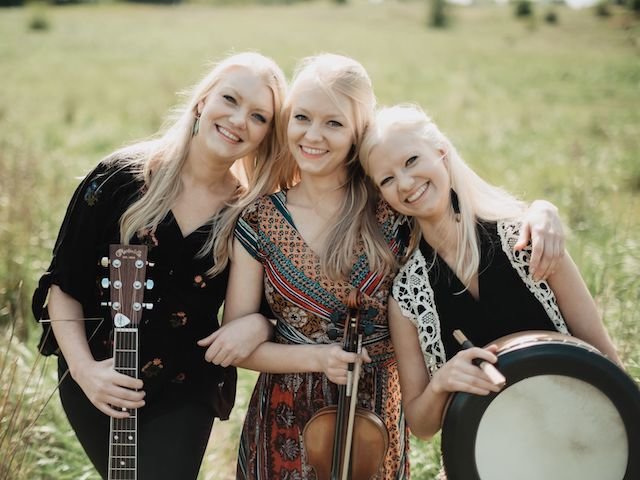 The Gothard Sisters, Greta (from left), Willow and Solana, will bring their contemporary Celtic sound to Pastorius Park next Wednesday night in the park’s final concert for this season.[/caption]

Contemporary Celtic trio The Gothard Sisters will bring “lots of instruments, Irish step dancing, humor, ballads, fiddle tunes and much more” to the closing performance of this year’s free Pastorius Park Concert series. “And we’re pretty kid-friendly, as well,” said Greta Gothard, 32, who will be performing with her sisters, Willow, about to turn 30, and Solana, 24. The concert takes place on Wednesday, July 24 at 7:30 p.m.

The sisters, who are of Scandinavian, Irish and Scottish descent, were born and raised in the Seattle area. “We were home schooled, and our parents played folk and world music around the house. Growing up, we heard a lot of Irish and Celtic music. So we absorbed that from a very young age. We were taking violin lessons and began learning Irish dance after we saw 'Riverdance.' We were completely obsessed with it,” Greta added.

The Gothard Sisters soon got involved in the world of competitive Irish dancing and started competing in world championships. One of the competitive events they attended was actually held in Philadelphia. “We were hearing music all the time because they always have live music at the competitions. We were already playing violin, switched to fiddle and started embracing Celtic music and the Celtic tradition,” Greta said. The sisters rounded out their sound by adding acoustic guitar, mandolin, bodhran, djembe and whistle.

The Gothard Sisters have been performing, touring and writing music together for 10 years. “We started out as a classical trio. When we became obsessed with Celtic music, we began incorporating it into the show. We started performing together to raise money to go to the world Irish dance championships in Ireland. An agent from Nashville saw us and she said, ‘You guys can do something with this.’ She gave us her card and started developing the act. It went from there.”

Throughout their career, The Gothard Sisters have been Influenced by fiddle players Natalie MacMaster, Eileen Ivers and Liz Carroll, Irish bands like Flook, Scottish singer/songwriters like Dougie MacLean and Julie Fowlis.

“Midnight Sun,” their latest CD, is the first of their seven recordings that features all original music. It reached #6 on the Billboard World Music chart, the highest-ranking debut on the chart. They spent seven months in the studio collaborating on the recording.

They attribute their unique sound to a songwriting process whereby each sister develops and brings a different element.

“I write lyrics and also play guitar,” said Greta, “so I’ll do some of the arranging of a song. Willow is the lead fiddle player for the group, and she loves writing, too. She does a lot of the new instrumental tune writing. Our younger sister Solana is the lead singer, and she’ll add her interpretation of the songs. She also plays a bunch of percussion instruments, and she’ll bring a little sparkle to make the sound more interesting.”

Writing in Folk Words Review, Tim Carroll said, “The Gothard Sisters have perfected their handling of Celtic influenced contemporary folk ... the true magic comes from their ability to craft music both fresh as a sunrise and yet drenched in tradition.”

In October, the Gothards will embark on a 20-city concert tour of Japan in partnership with a cultural exchange concert series there. “It’s interesting how Celtic music has spread so far. It’ll be fun to bring our brand of it over there.” The sisters have also performed with a Disney Cruise Line in Europe.

To learn more about the Gothard Sisters and listen to their music, visit GothardSisters.com

Pastorius Park is at the corner of Millman Street and Hartwell Lane. If it rains, the show will move to Springside Chestnut Hill Academy’s Chapel at the Inn, 500 W. Willow Grove Ave. The free Pastorius Park Summer Concert Series is supported by both the Chestnut Hill Community Association and the main sponsor, Chestnut Hill Hospital. The Gothard Sisters performance is sponsored by Merrill Lynch-Nottingham, Walsh, Goodman & Associates.