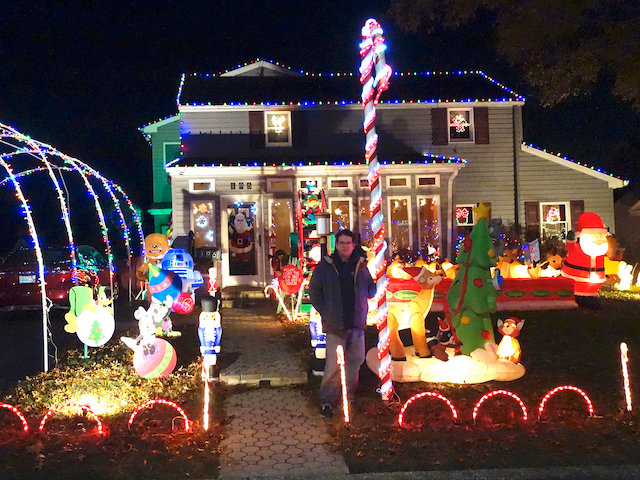 Colin McKelvie, one of the originals to help with Candy Cane Lane, watches the cars and people pointing to his colorful and eclectic display. (Photo by Barbara Sherf)

It’s time to let you in on one of the area’s best kept secrets: Candy Cane Lane. For more than 15 years now, neighbors in the 100 block (and now beyond) of Garth Road in the Oreland section of Springfield Township produce an incredible display of lights, inflatables and wooden and moving holiday decorations. In front of each home stands a 12-foot lighted candy cane placed in a special receiver installed by the curbs – thus the name Candy Cane Lane.

There is even a special decorated sign above the Garth Road sign renaming the street Candy Cane Lane, and under it stands a mailbox for letters to Santa. And on Dec. 16, Santa makes his way there and around the area in his specially decorated Oreland Volunteer Fire Company fire truck, handing out candy canes and posing with the children.

The best thing about all of this is that it’s free.

Oreland Fire Company volunteer Gerard “Jerry” Schneider came up with the idea in the early 2000s. Nobody can seem to remember the exact year, but all fingers point to Schneider, who moved to the corner house by Santa’s mailbox in 1988 with his wife, Cheryl. She has created a winter wonderland of her own inside their spirit-filled home.

“We used to go see lights in Warminster and Ivyland in the mid ‘80s,” he said. “There were homes with huge lights and figurines and the candy canes. We passed one on Fitzwatertown Road in Willow Grove, and as we passed his house I said, ‘When I get my own home, I’d like to do that.’”

And so not only did he decorate his home and lawn, he eventually made a prototype of a candy cane out of plastic plumbing tube that could be melted and shaped into a cane. The red stripes were easy to add with red tape, and the first official Garth Lane Candy Cane was born.

From there, Schneider sent letters to his neighbors sharing the costs involved and his dream of having the whole block participate. Just like the saying from the popular movie “Field of Dreams” goes, “If you build it, they will come!” And they did. Some came on board right away; others at least put up lights and themed decorations.

John Ferraro, who lives next door to Schneider, got the bug and despite a drizzle on a recent Sunday afternoon, he was under a covered porch bemoaning the fact that some lights were tangled and others burned out. Wearing an Eagles sweatshirt on a bye week, he was creating Candy Cane Village on his front lawn.

“I think it was 2002 or 2003 when a notice went up and neighbors started to get in the spirit, some trying to outdo others,” Ferraro said. “Somehow word has gotten out to the ‘Over 55’ retirement communities and it’s nice to see the smiles on their faces, but it’s even more thrilling when a family parks their car at the top of the street and then walks down the street pointing and laughing and enjoying the lawns in person. And when it snows, it just looks like a lit up village from olden days.” 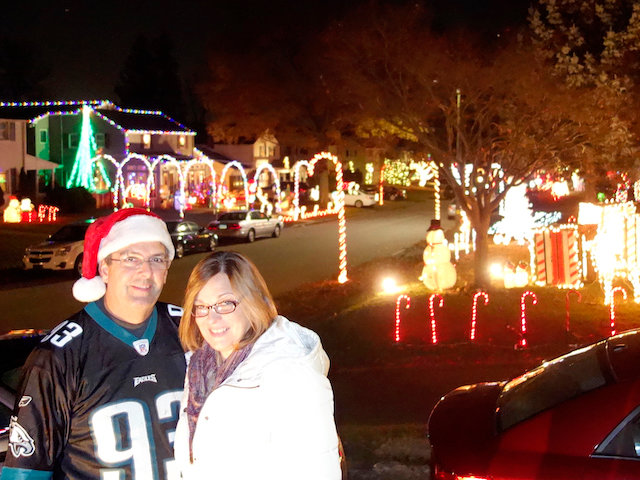 Mr. and Mrs. Candy Cane Lane, Jerry and Cheryl Schneider at their Garth Road (aka Candy Cane Lane) home in Oreland. Santa will be escorted to Candy Cane Lane via an Oreland Volunteer Fire Company truck at 6 p.m. on Sunday, Dec. 16. For weather related updates and the full Santa schedule, visit facebook.com/orelandfire. (Photo by Barbara Sherf)

“I’ve always enjoyed the lights on the Avenue, but I stay behind the scenes and work on the indoor decorations,” said his wife Michele Ferraro, who works as Vice President of Business Banking for Univest in Chestnut Hill. “I do the inside.”

All of the neighbors have seen traffic ramp up year after year, but many were surprised to see small vans and shuttle buses touring the displays.

Nicole Bennett, Director of Resident Services and Development at the Hill at Whitemarsh, confirmed that their residents are taking a tour the week of Dec. 17.

“One of our drivers knew of Candy Cane Lane and brought the residents there to see it,” Bennett said. “I think that they go each year but it is up to the driver to decide on the route for the evening.”

Schneider said his goal is to have the street decorated by the first weekend in December. But with showers on both Saturday and Sunday, residents like Sue and Tim McDevitt, were jumping outside between the rains.

“Jerry put the signs up on the Fourth of July announcing he was making and selling the candy canes and we saw it progress farther down the block year after year, but we were the holdouts,” Sue explained. “Tim thought he could make it himself, but year after year it never came about. Finally, friends on another street said they were getting rid of a pair of their candy canes and we bought one for $50.”

“See, it paid to hold out,” Tim chimed in, noting that each year they have added another lighted decoration. This year it was a snowman that Sue found at an end of season sale at Target.

Most homeowners have moved to LED lights and say the increase in their electric bills is really negligible for the joy it brings.

“We had pictures taken five years ago when our niece was 2 years old, and seeing Santa Claus really for the first time as he made his way down the street and stopped near here brings back such precious memories,” said Sue McDevitt.

Cindy Magarity has been in her home for more than 30 years and couldn’t imagine living on another block.

“We are very Christmassy here,” she said. “It’s wonderful and while there is a bit of competition, it’s really just for fun.”

Magarity grew up on Gravers Lane and went to Jenks Elementary School, Our Mother of Consolation Church and Germantown Lutheran High School. She formerly worked at El Quetzel and Dorothy Bullitt women’s clothing store, and always enjoyed the lights in Chestnut Hill. So when word came of turning Garth Road into Candy Cane Lane, she was all in.

“How could you not get into this when you see the joy it gives and the joy we receive?”

Colin McKelvie has been on the street for more than 25 years and was an original helper with the candy cane project. The front lawn of his home has everything from a lighted crèche, a wooden ferris wheel filled with Disney characters, lighted skiers making their way around the base of a tree, a “WE SUPPORT SPRINGFIELD POLICE” yard sign, and lights around an entire car cover (sans the cover) over the driveway.

“We started with the wooden ducks and we have made all of the wooden ornaments,” he said. “It’s all about getting the kids and the parents in the spirit, and it’s really fun when it snows and they walk down the street wide-eyed.”

Dot Tercha knew nothing of Candy Cane Lane when she bought the home 12 years ago.

“We were mowing the lawn and found this weird box out by the curb and nearly destroyed the mower,” she laughed. “That’s when the secret was revealed and Jerry explained the concept and had even held the previous owners’ candy cane decoration in his garage for us.”

The Holloway family of Glenside has been visiting Candy Cane Lane for about a decade.

“It wouldn’t be Christmas without a visit to Candy Cane Lane,” said Jill Holloway, who along with her husband and three children noted that the dip in temperatures prevented them from walking the lane. “We may come back and do that, but this brings us such joy and gets us in the spirit of the season. These folks are incredible.”

Jerry says that the spirit has traveled to the 200 block and even all of Oreland.

“Everywhere I go now I see more and lights and decorations going up. It’s been really neat to see,” he said.

Candy Cane Lane and all of Oreland will be jumping on Sunday, Dec. 16. Get there early and bring your cameras! For weather related updates and a full schedule of Santas stops go to facebook.com/orelandfire

Flourtown resident and regular Local contributor Barbara Sherf can be reached at 215-990-9317 or at CaptureLifeStories@gmail.com. Please connect with her about your favorite holiday rituals.