Our Town: The Corson Quarry and the local history of lime

One of several surviving early lime kilns on Germantown Pike near the intersection of Chemical Road. by George McNeely (Ed. note: Due to a production error, the first part of this week's "Our Town" …

Our Town: The Corson Quarry and the local history of lime 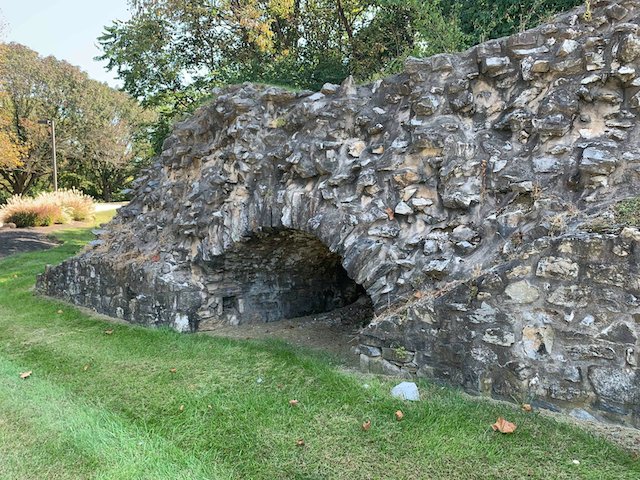 One of several surviving early lime kilns on Germantown Pike near the intersection of Chemical Road.

(Ed. note: Due to a production error, the first part of this week's "Our Town" column was cut off in the print version of the Local. The full version of the article is presented below.)

Lurking around Chestnut Hill and the surrounding towns are overlooked remnants of early commercial and industrial activities. The trick is to know enough about the history to be able to spot what remains when we stumble across it. Or, perhaps more likely, drive past.

The study of such remains is known as “industrial archeology.”

Henry Mercer, the visionary artist, entrepreneur and curmudgeon who created both the Mercer Museum and Fonthill Castle in Doylestown, cleverly called it “archeology turned upside down.” He collected the hand tools and other artifacts that were being discarded in the late 19th and early 20th centuries, looking to unearth and preserve the ways of life, knowledge and technologies that were being lost as our world changed.

In Rome, we can see vestiges of ancient Roman plumbing systems and visit the astonishing surviving multi-story Markets of Trajan from the early second century AD.

In England, we can visit Ironbridge Gorge, where the fast-moving River Severn exposed rich deposits of coal, iron ore and limestone that in the early 18th century provided fodder for the earliest stages of the Industrial Revolution.

In Bethlehem, Pennsylvania, we can visit 120 acres of exhausted and blackened dinosaurs that were once the mighty Bethlehem Steel Corporation – in its glory days one of the largest steel plants in the world.

In our very own Whitemarsh Valley, under the woods, fields and houses, are extensive limestone deposits that have been heavily mined and processed since the earliest European settlers arrived in this area.

Most prominent is the old Corson Quarry, its vast size and depth deliberately masked from drivers on Stenton Avenue and Joshua Road by fences and vegetation. It is only identified on Google Maps by a quiet reference to its bland current corporate name, Highway Materials, and a large blank gray area without any roads. But switch to satellite mode for a startling view of the pits that are reportedly the oldest continually functioning limestone quarry in the United States.

Some of us were hopeless in geology class. But science-loving readers may remember that limestone is a granular sedentary rock that is composed largely of the skeletal remains of various marine organisms that lived around coral reefs back when even the Whitemarsh Valley was under water. Limestone is water-soluble and erodes with time, and thus most caves are in limestone bedrock, including Pennsylvania’s many famed caverns that some readers may have visited as school children.

Limestone features prominently in some of the great tourist spots around the world: the Rock of Gibraltar, the Great Pyramid of Giza, the White Cliffs of Dover. It appears in the largest concentrations in Europe and the U.S. and has been quarried most heavily in recent centuries. 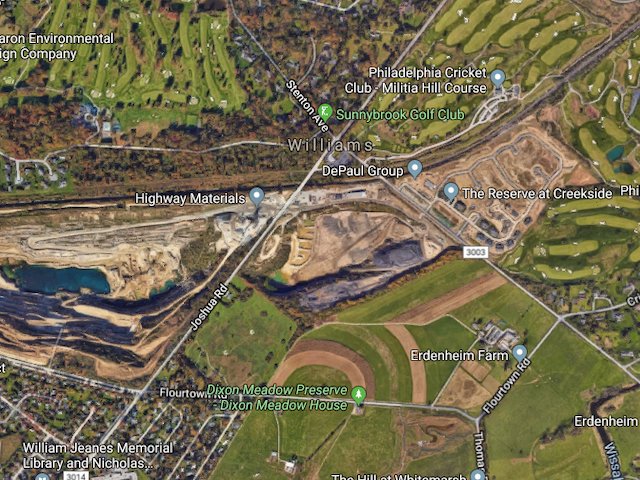 A satellite view from Google Maps of the former Corson limestone quarries just beyond Chestnut Hill in the Whitemarsh Valley.

It has long been used for construction because it is comparatively easy to break up. But long ago our ancestors discovered that if limestone was heated over a period of time it disintegrated into a powder that became known as lime or quick lime (think of “the quick and the dead” from the Apostles’ Creed). That lime powder can be mixed with water and/or other substances to create a range of useful products, from fertilizer to lime wash to mortar.

Early English and German settlers in Pennsylvania would have brought that knowledge to the New World. Once they discovered the seams of subterranean limestone, they started constructing stone kilns to process the limestone into quick lime.

Such “draw” kilns were constructed of harder local stone and featured a tall chamber with an air shaft at the top and a side opening. The chunks of limestone were layered inside with wood, coal or coke, and the quick lime was extracted from the side opening as the powdered lime was formed.

The earliest recorded local limekiln was constructed by Thomas Fitzwater in Oreland in 1686. By 1693, enough quick lime was being produced by Fitzwater and others for Penn family agents to construct the road later known as Limekiln Pike to connect those kilns with Philadelphia and the docks along the Delaware River.

The products made from those early limekilns were both essential to local farmers and an export bonanza. Many hundreds of such draw kilns were constructed locally and continued into the 19th century. They were a standard feature of many farm complexes and an example of the broad range of activities that helped local farmers to function independently.

Quick lime was scattered on fields as a fertilizer. It could also raise the PH balance in fields that were too acidic. It could be mixed into plaster to cover interior walls. Or in a more liquid form be used to whitewash interior and exterior walls of barns and other structures. Once dried, that wash forms a hard surface that is also a minor disinfectant.

Whitewash was far less expensive than paint and became associated with the poor, giving rise the expression “Too poor to paint but too proud to whitewash.” Readers may remember that classic eastern Pennsylvania stone farmhouses were typically covered with a thin coat of plaster and lime wash. More prosperous later owners have gradually moved away from that custom, but the website The Prairie Homestead still offers helpful guidance on whitewashing your barns and chicken coops.

Importantly, lime-based mortar for stone or brick walls is far superior to standard contemporary cement (which sometimes includes lesser amounts of lime). Lime mortar joints expand and contract with the temperature, unlike modern cement mortars that are hard and thus can cause spalling or chipping in both stone and brick. Lime mortars also allow moisture to move through the masonry. (See the website of the Chestnut Hill Conservancy for more information on mortars appropriate to historic houses.)

In the 19th century, such smaller local kilns were gradually replaced by larger industrial kilns that could produce larger quantities and were located closer to transportation. So such farm kilns were abandoned and have largely disappeared.

But there are several such early kilns clearly visible on the north side of Germantown Pike near the intersection with Chemical Road. They are well worth a quick stop.

The old Corson Quarry continues operating, although what is known as Hole #1 (of three) on the north side of Stenton Avenue has been closed, filled and a residential and office development built, known creatively as The Reserve at Creekside. The Highway Materials website offers crushed limestone for construction and accepts “clean fill” that presumably will gradually fill up the other holes as the quarrying efforts diminish. It is curious to see the photos on that website that show the extent of the huge deep pits and other activities so near where we live and shop.