PC sees lacrosse victory against Shady Side slip away

The match would go into overtime at 10-10, and midway through the sudden-victory OT the Bulldogs penetrated the Quakers' cage to claim an 11-10 triumph. The loss levelled PC's record at 4-4.

PC sees lacrosse victory against Shady Side slip away 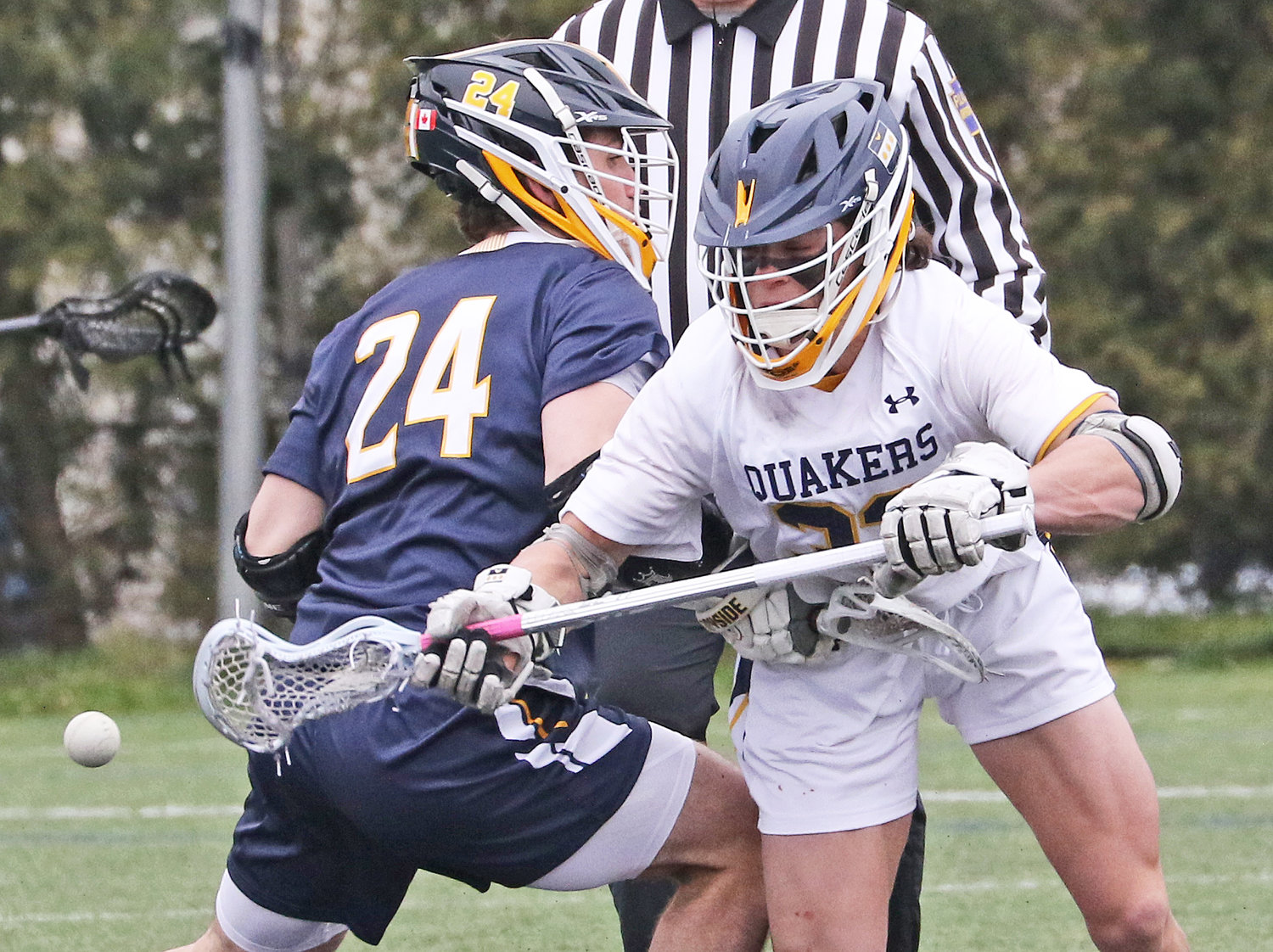 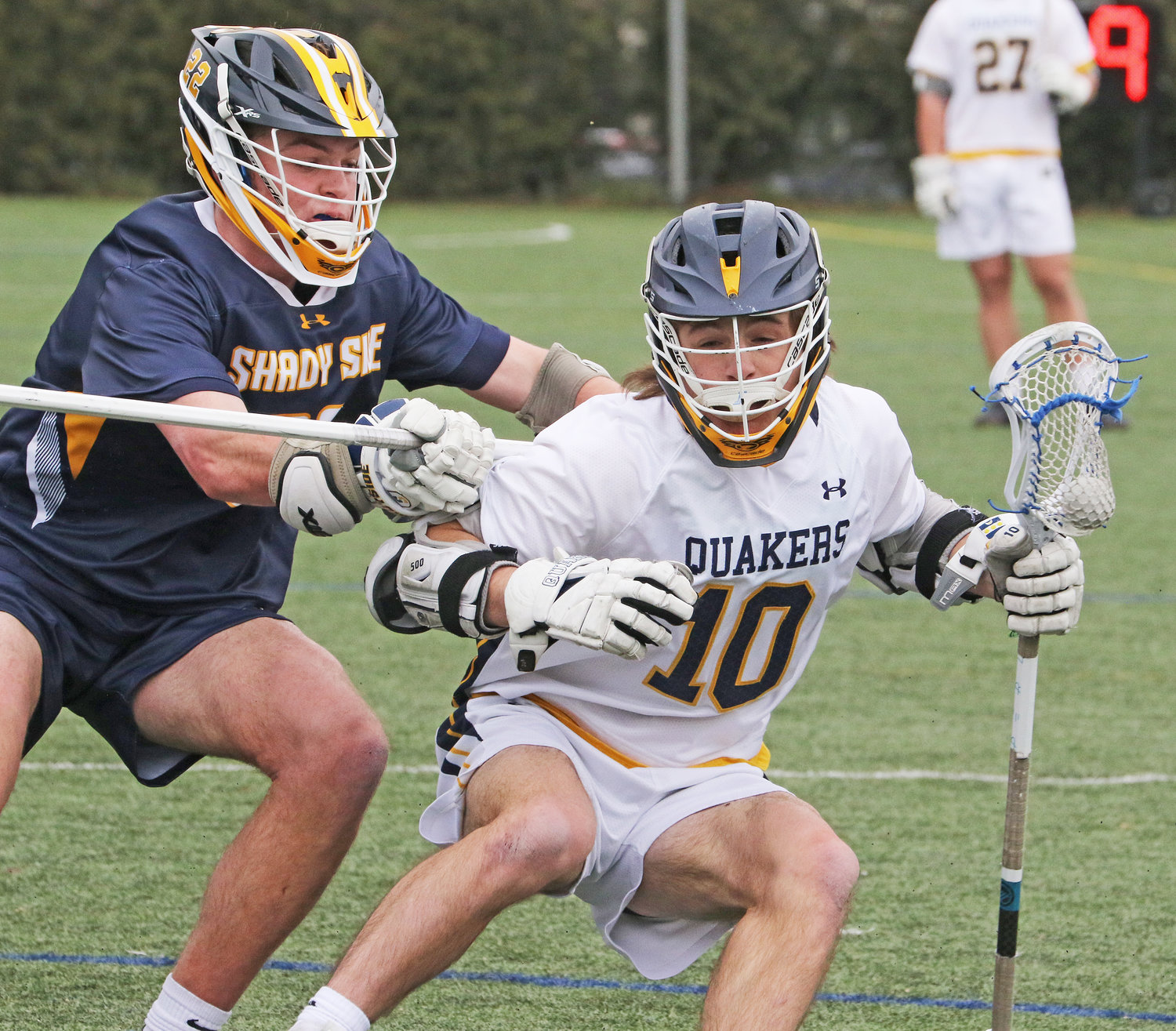 Senior Petey Malitas of the Quakers braces himself as he's checked from behind by a Shady Side defenseman. Photo by Tom Utescher
Previous Next
Posted Wednesday, April 6, 2022 9:57 am
by Tom Utescher

In the middle of Spring Break week, the boys of Penn Charter appeared to be cruising to victory against the visiting lacrosse team from Shady Side Academy. The Quakers gained a 6-3 advantage by halftime last Wednesday, and in the third quarter they led by as many as five goals over the Bulldogs, who hail from suburban Pittsburgh.

Shady Side, on a road trip that had included a stop at Mercersburg (Pa.) Academy, began to creep back up on their Philadelphia hosts. Eventually, they pulled even at 8-8 about three minutes into the fourth quarter.

The match would go into overtime at 10-10, and midway through the sudden-victory OT the Bulldogs penetrated the Quakers' cage to claim an 11-10 triumph. The loss levelled PC's record at 4-4.

Junior Nick Walter, who has committed to the U.S. Air Force Academy, led the Quakers' scoring with a hattrick, and his classmate, Chet Kempinski, scored two goals. Another two came from senior Peter Malitas (who has signed with Duke University), and there were single goals from senior Oliver Leedale-Brown, junior Owen Black (committed to Delaware) and sophomore Gavin Michener.

The early weeks of each season usually involve adapting to the loss of the previous year's seniors.

McDonough noted, "Obviously there's an adjustment when you lose Tone DeMarco (now at North Carolina) and guys like that, but we're learning to play with each other. We have good guys back; Colin Michener (a senior headed for Villanova) is playing well, and so is Petey (Malitas)."

With the team at the .500 mark following Wednesday's game, McDonough remarked, "We just haven't strung together four quarters yet. Some games we've put together two or three and got lucky and came out with a win, but today we didn't get lucky."

Fortune appeared to smile on Penn Charter for more than half the game, as the Quakers expanded on a three-goal halftime lead to enjoy an 8-3 advantage a few minutes into the third quarter. The Bulldogs steadily worked their way back, cutting their deficit to a single point (8-7) with 53 seconds remaining in the period.

A little later, the Quakers called a time-out to plan for the last shot of the third round, but Black's attempt with 10 seconds left sent the ball into one of the upright pipes of the Shady Side cage.

On other occasions, Penn Charter attackers swung around from the rear of the cage and shot as they came even with the near pipe. One more step would've improved their angle, and scoring chances, greatly.

With 8:55 remaining in the fourth quarter, one of the Bulldogs drove through the middle and scored to tie the match at 8-8. This time Charter responded fairly quickly, with 7:43 to go, as Colin Michener fed the ball from behind the goal to Walter out front on the right. The resulting 9-8 lead would be the Quakers' last.

PC went up on attack, but two outside shots from the right missed wide left, and the Bulldogs' keeper foiled an attempt to stuff the ball in from the edge of the crease.

The visitors had success at the other end, twice passing the ball from behind the Charter cage to set up goals out front with 5:51 and 5:17 remaining. They were now leading, 10-9.

Over the next few minutes, each team committed and then successfully killed penalties. However, with 1:09 remaining, Shady Side had two players penalized for slashing at the same time. Penn Charter was able to score the tying goal just 18 seconds into the two-man advantage, with Gavin Michener scoring with an assist from Kempinski.

Even after this goal, PC was up one player, since one of the Shady Side slashes had been a head check (an unreleasable penalty). In the remaining seconds of regulation, the Quakers missed two shots and had one by Gavin Michener saved.

A four-minute overtime session ensued, an extra period which would end with a goal by either side. From high up in the Bulldogs' offensive set, a long pass down low set up the winning goal, fired from the edge of the crease. With 2:01 left in OT, the match was ended.

"We just didn't finish, and we had plenty of opportunities to put the ball in the back of the net," Coach McDonough commented. "Defensively, we just had some mental lapses. We gave up some goals we shouldn't have, and we also need to guard against penalties, and not give teams chances to score an easy man-up goal."