Near the end of the meet, PC decided not to send out wrestlers at 220 and 285 lbs., so there was a double forfeit in each of those weight classes. 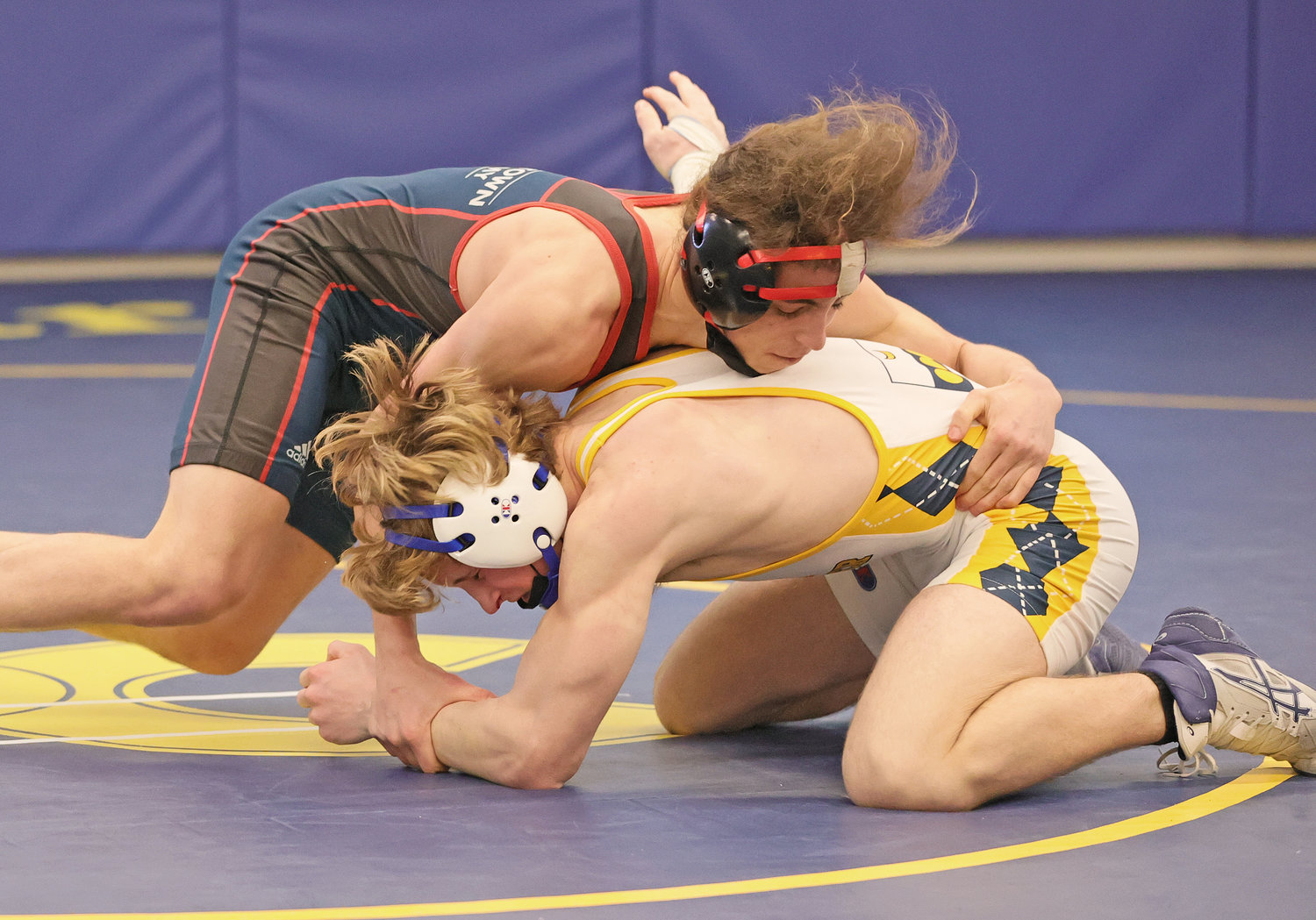 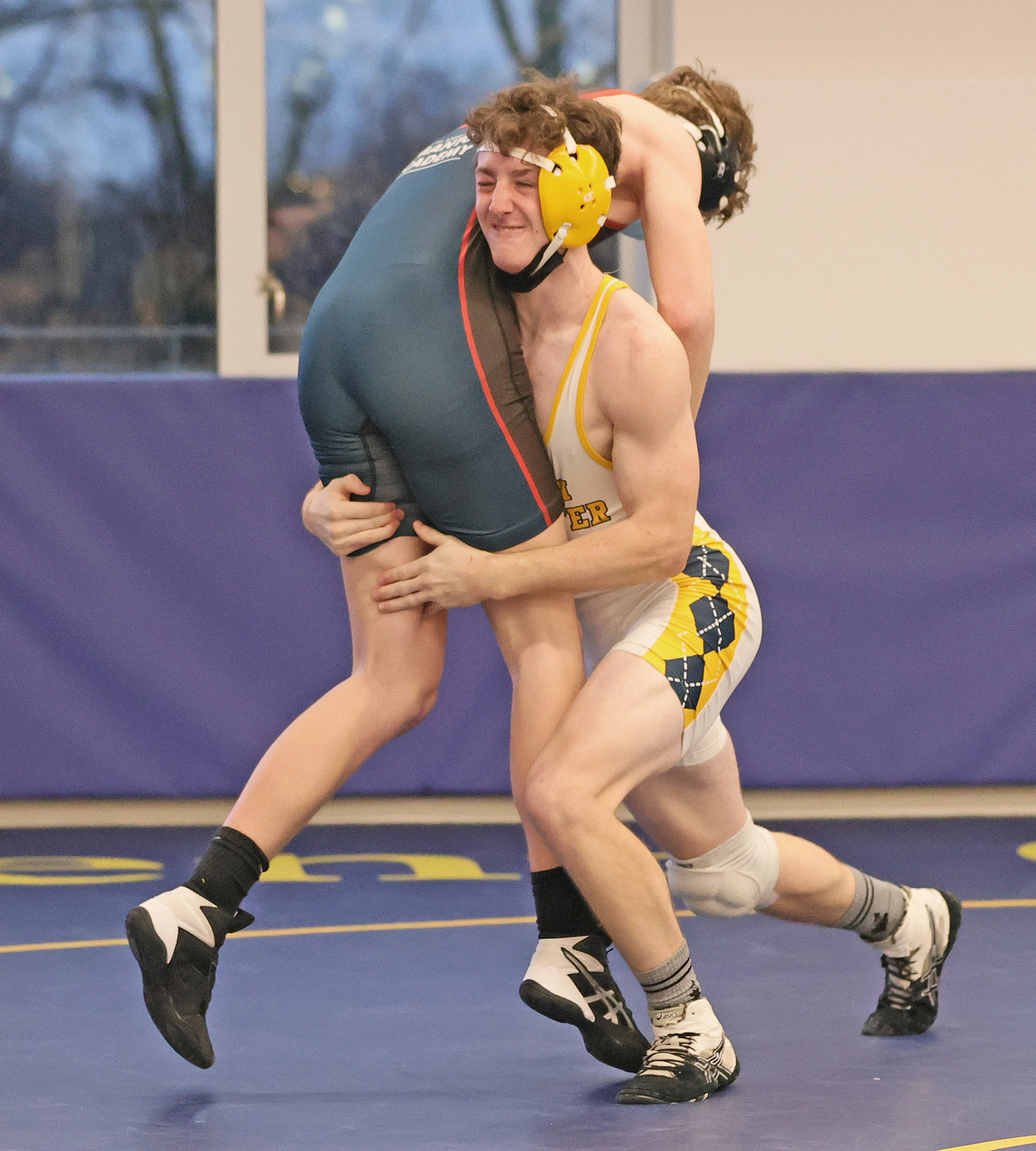 En route to a victory by fall at 160 lbs., the Quakers' Matt Callahan goes for a takedown against Maloy Lafferty of the Patriots. (Photo by Tom Utescher) 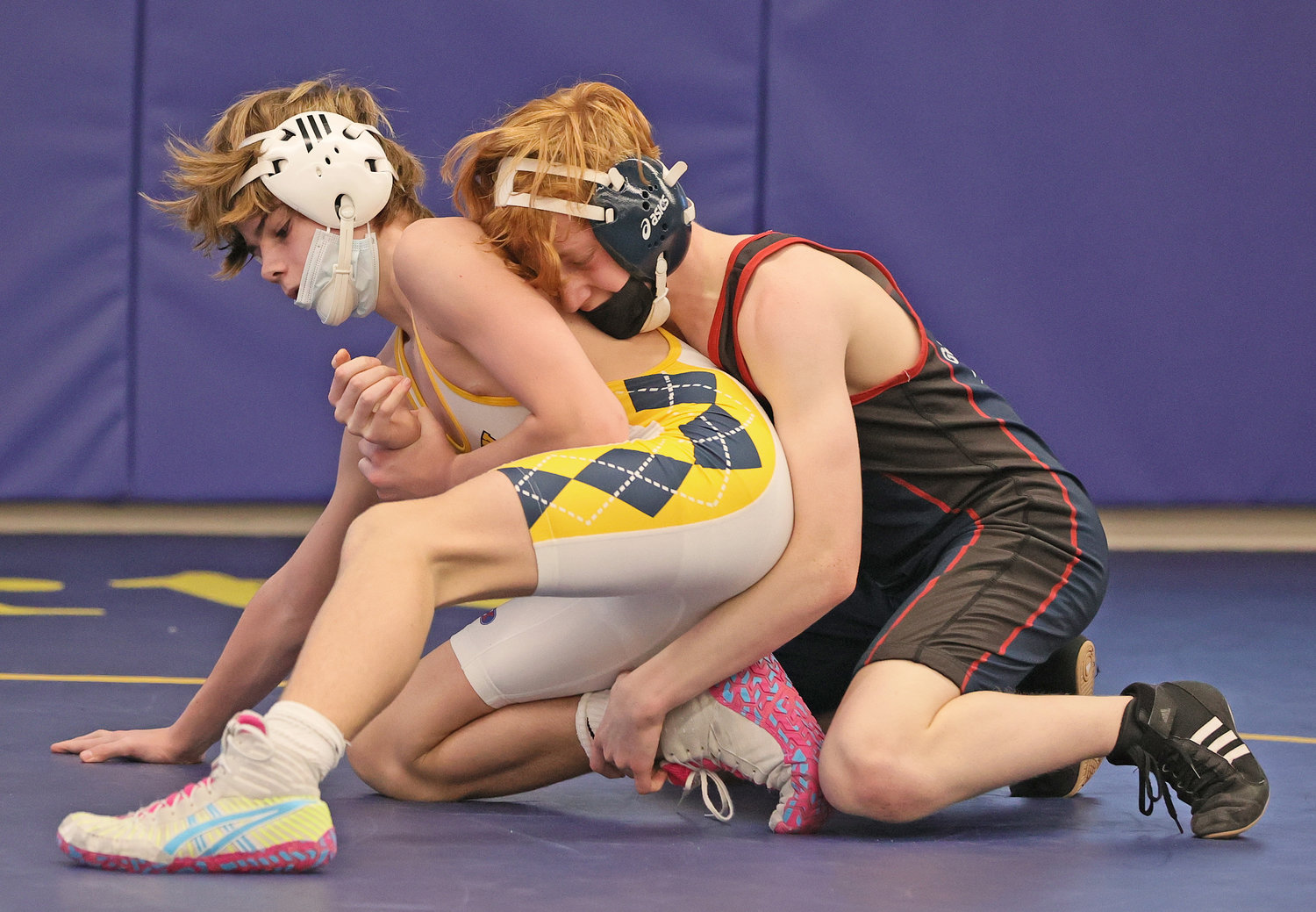 Starting the second period of the 120 lb. match on the bottom, PC's Griffin LaMent (left) would reverse positions and then pin Jacob Julin of Germantown Academy. (Photo by Tom Utescher)
Previous Next
Posted Thursday, February 10, 2022 6:00 am
by Tom Utescher

When Germantown Academy's wrestlers paid a visit to Penn Charter last Friday afternoon, there was not much drama attached to the actual outcome of the meet. With a small squad this winter, the GA Patriots planned on forfeiting to their hosts in half of the 14 weight categories.

Near the end of the meet, PC decided not to send out wrestlers at 220 and 285 lbs., so there was a double forfeit in each of those weight classes.

Collecting 30 points from five Patriots forfeits and another 30 from pins out on the mat, the Quakers claimed a 60-12 victory and raised their season record in dual meets to 18-4.

While there were a limited number of contests scheduled for most sports teams during the COVID-19 winter of 2020-21, the scholastic wrestling season disappeared entirely.

Quakers head coach Peter Shaifer, a seasoned mentor in the sport, a Penn Charter graduate, and a mathematics teacher at the school, was present on campus to help sustain interest in the PC wrestling program. His ongoing efforts with the middle school program have resulted in a fairly steady stream of young wrestlers progressing into the upper school ranks.

The COVID hiatus took more of a toll on Germantown Academy, including, eventually, a coaching change. There are two juniors on the squad this year, and the rest of the relatively short roster is filled out by freshmen.

Hired last fall, new head coach John Staudenmayer wrestled at Plymouth Whitemarsh High School and the University of North Carolina. He returned to do some coaching at both institutions, and has additional experience as a scholastic and club wrestling coach. Strong interest in the GA middle school should help revive the varsity program going forward.

Last Friday's meet began at the traditional starting point at the low end of the weight scale. In a 106 lb. bout between two freshmen, the Quakers' Henry Greenberg quickly took down visitor Jais Williams, pinning him with 42.5 seconds remaining in the first period.

The meet score was tied briefly, 6-6, when Charter forfeited the 113 lb. class to Patriots freshman Robert Leeds. The home team then went ahead for good with pins in the next two matches, each one featuring two ninth-graders. The PC 120, Griffin LaMent, built up an 8-0 lead in the first period with a takedown and back points. Starting down for the second round, he reversed on GA's Jacob Julin, then ended the contest with three-and-a-half seconds left in the period.

At 126, Munir German was able to take down and pin Germantown's Charlie Morris in 34 seconds. When the Pats forfeited the 132 lb. match to Penn Charter freshman Grey Catlow-Sidler, PC led 24-6 in the team scoring.

Once again, two freshmen were featured in the following contest. The 138-pounder for PC, Hugh Maley, pinned the Patriots' Logan Whittaker with one minute and 26 seconds remaining in the opening round.

The lone GA victory on the mat came at 145 lbs., which was also the only contest to extend past the second period. Neither GA junior Jacob Sasson nor PC sophomore Eian Kilpatrick were able to complete a takedown in the first period, then Sasson gained a 2-0 advantage in the second with a reversal from the bottom position.

Starting down for the third round, Kilpatrick tied things up with a reversal, but then Sasson responded in kind to go ahead, 4-2. The Patriot middleweight secured a pin with 36.4 seconds remaining in the match. Germantown Academy then forfeited the 152 lb. class to sophomore Michael Filoon of the home team.

The last action on the mat occurred in the 160 lb. category, where senior Matt Callahan of the Quakers dispatched visiting freshman Maloy Lafferty with 52.4 seconds left in the opening period.