Neighbors may have to adjust to taller buildings, less parking.

Neighbors in Mt. Airy’s central business district will likely soon see a taller version of the historic building that once housed the Mt. Airy National Bank at 7208-10 Germantown Ave. Developer …

Neighbors may have to adjust to taller buildings, less parking. 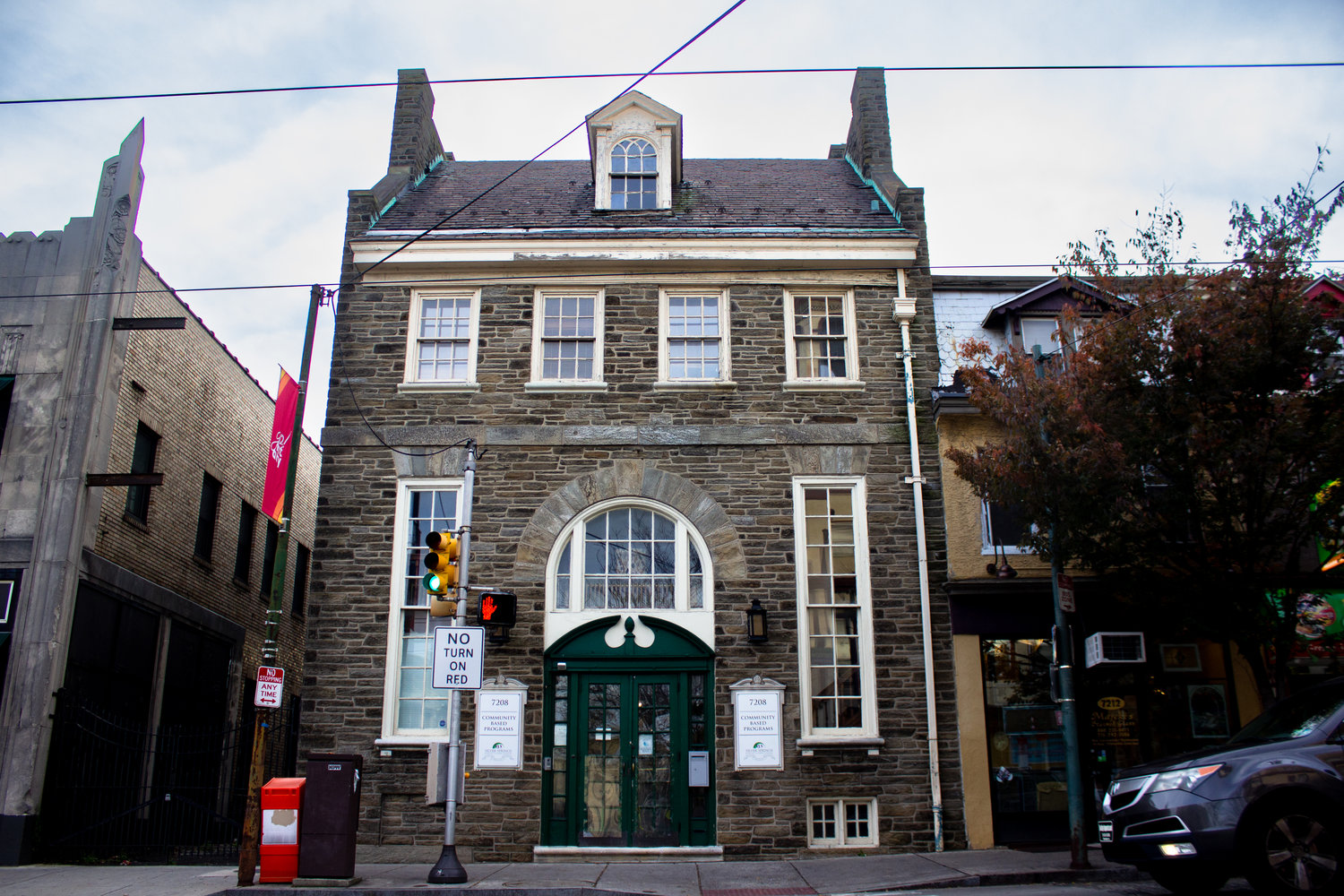 The historic building at 7208 Germantown Ave., which once housed the Mt. Airy National Bank, in its present form. | Photo by Julia King. 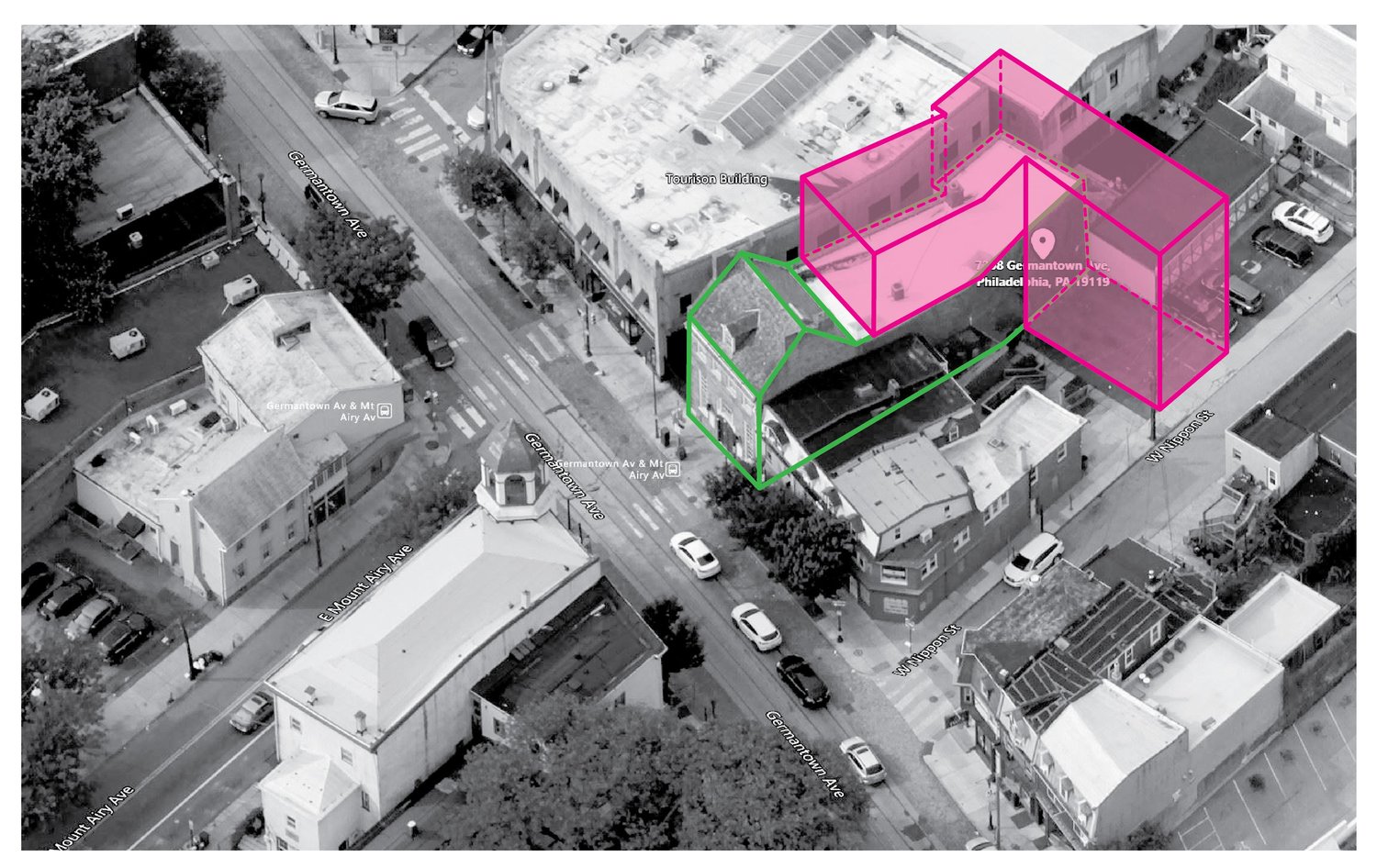 A bird's eye view of the proposed development showing the existing building at 7208 Germantown Ave. (in green) and the proposed additions (in pink). 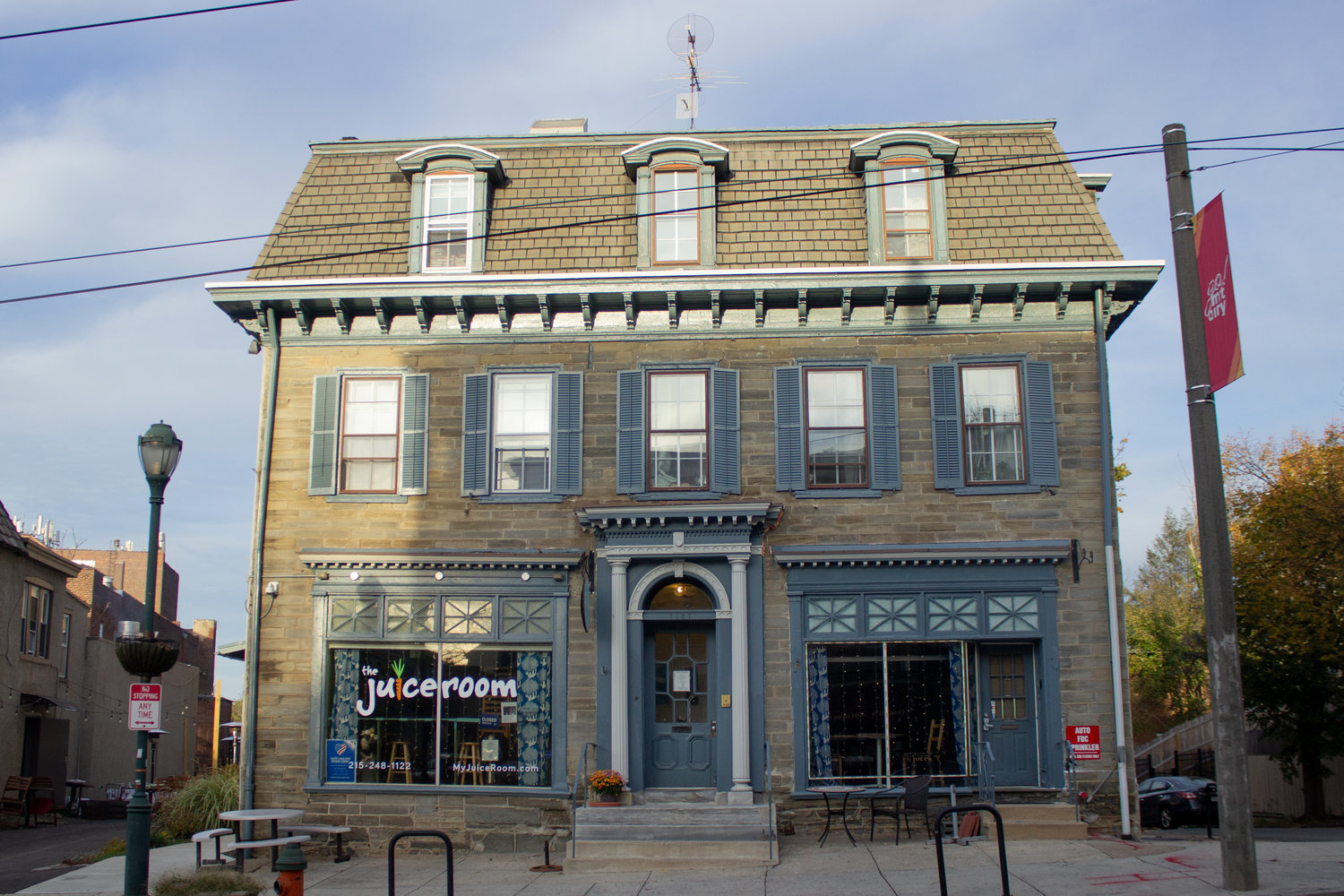 A commercial building at 7127 Germantown Ave in Mount Airy, Pa. on Thursday, Nov. 4, 2021. It is estimated to be built in 1915 and uses Wissahickon schist, a historically popular building stone found around Pennsylvania and surrounding states. It currently houses The Juice Room. | Photo by Julia King. 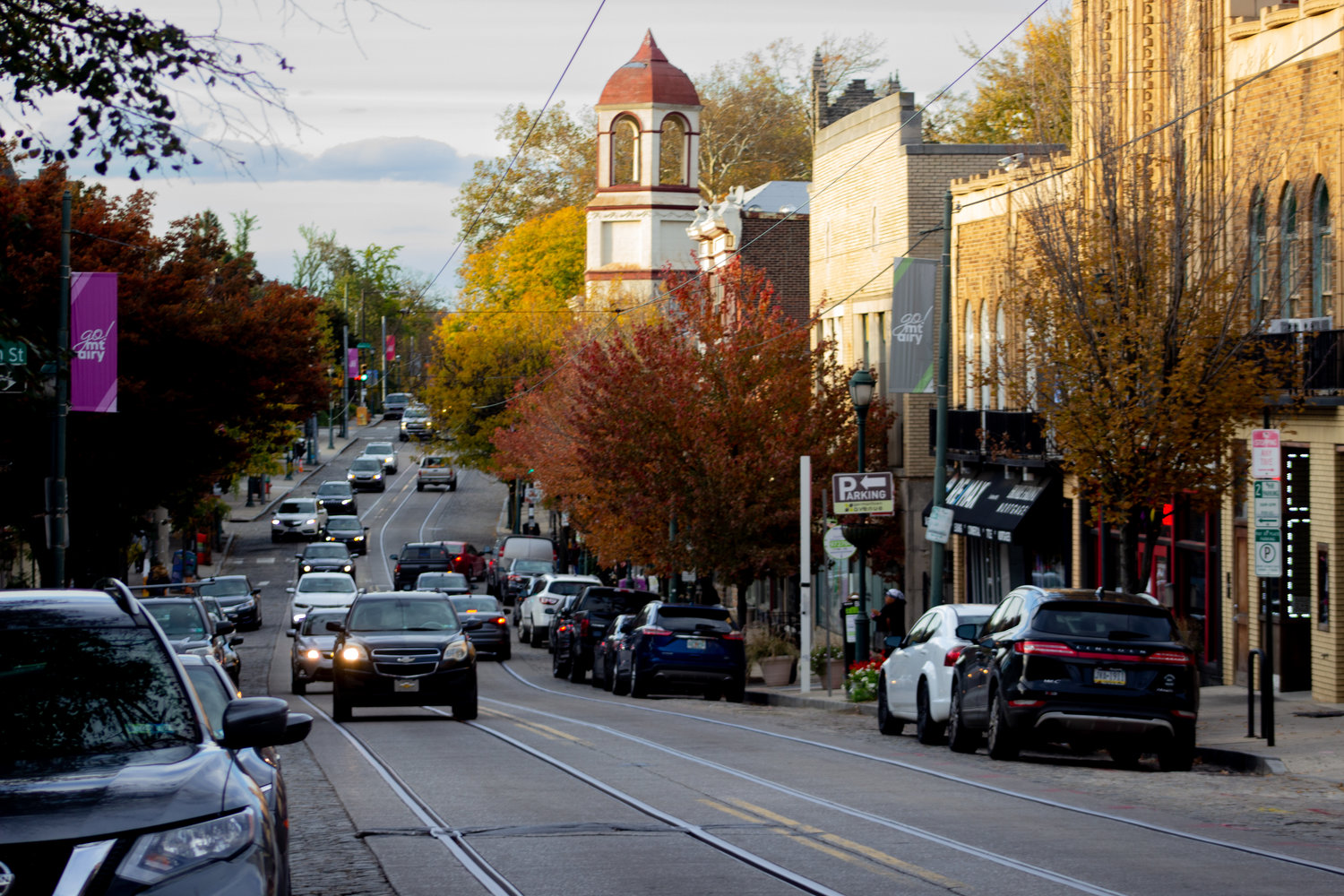 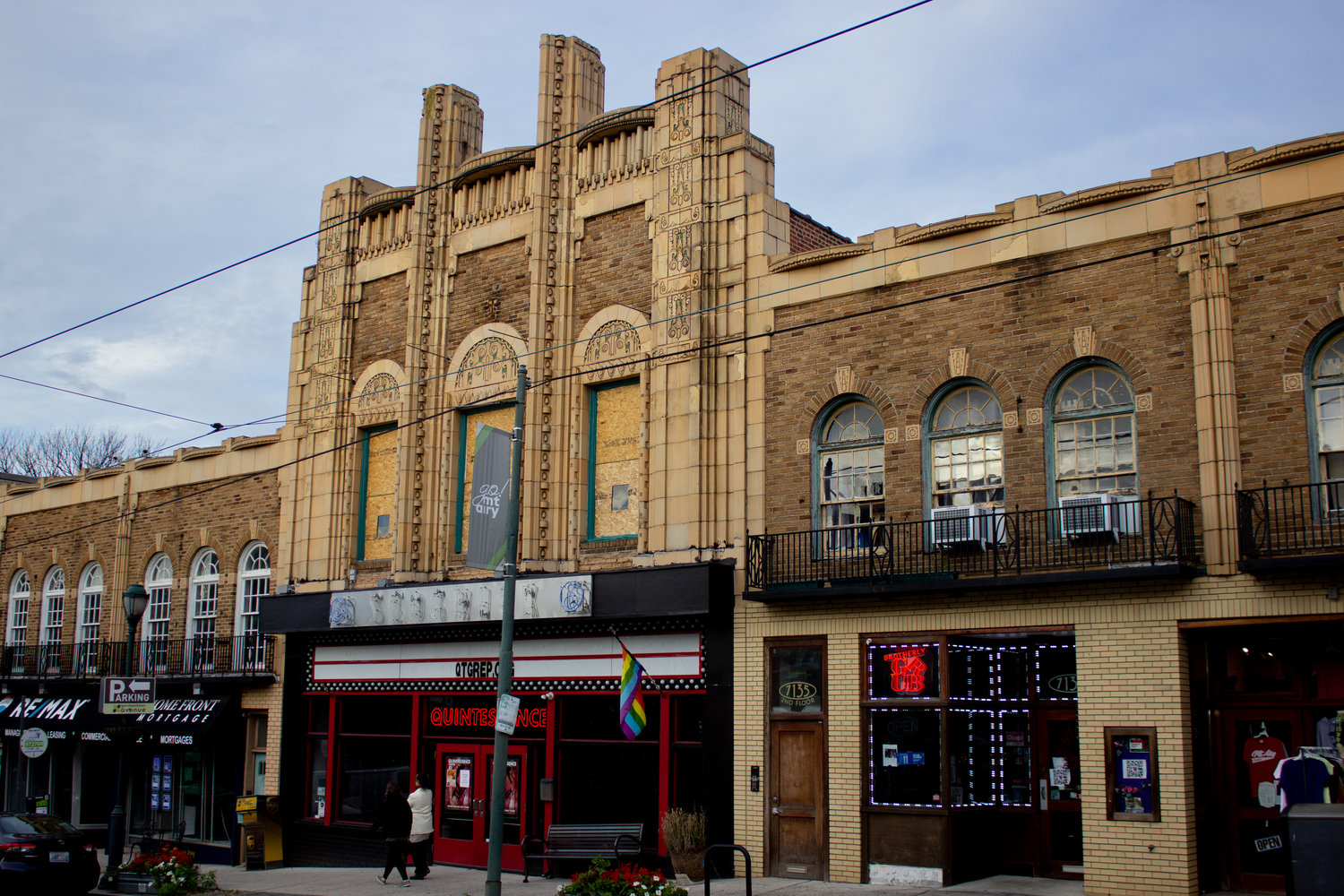 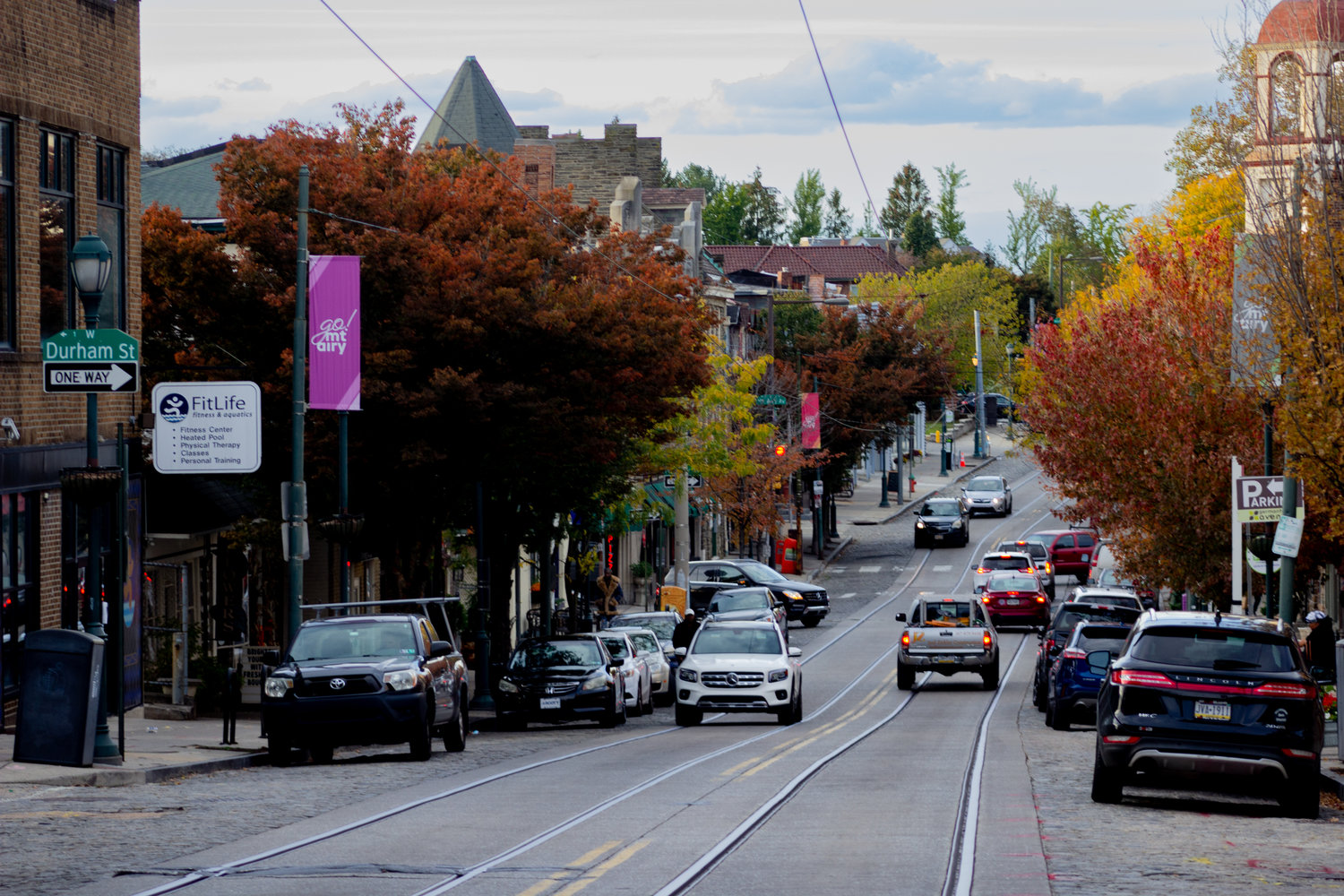 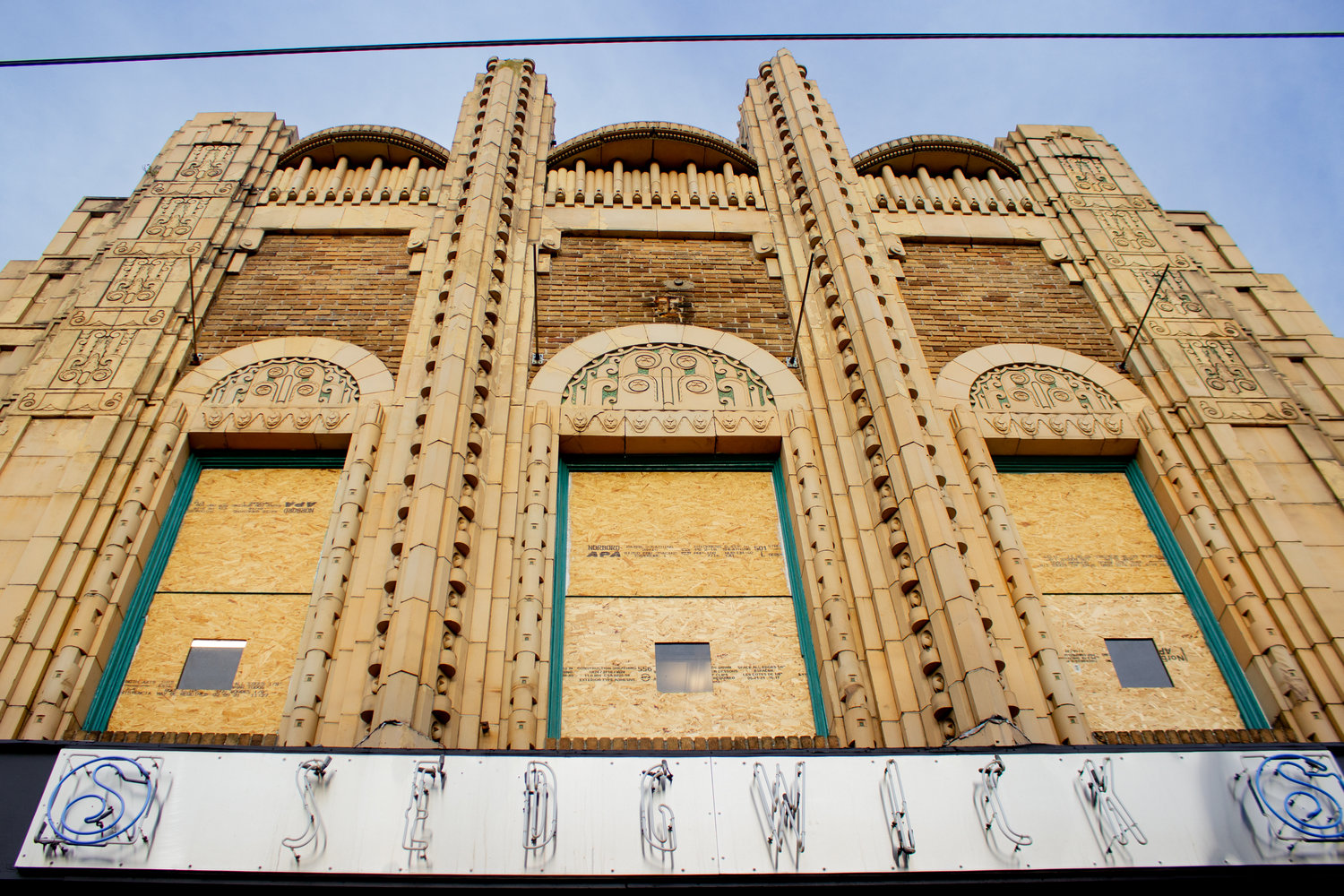 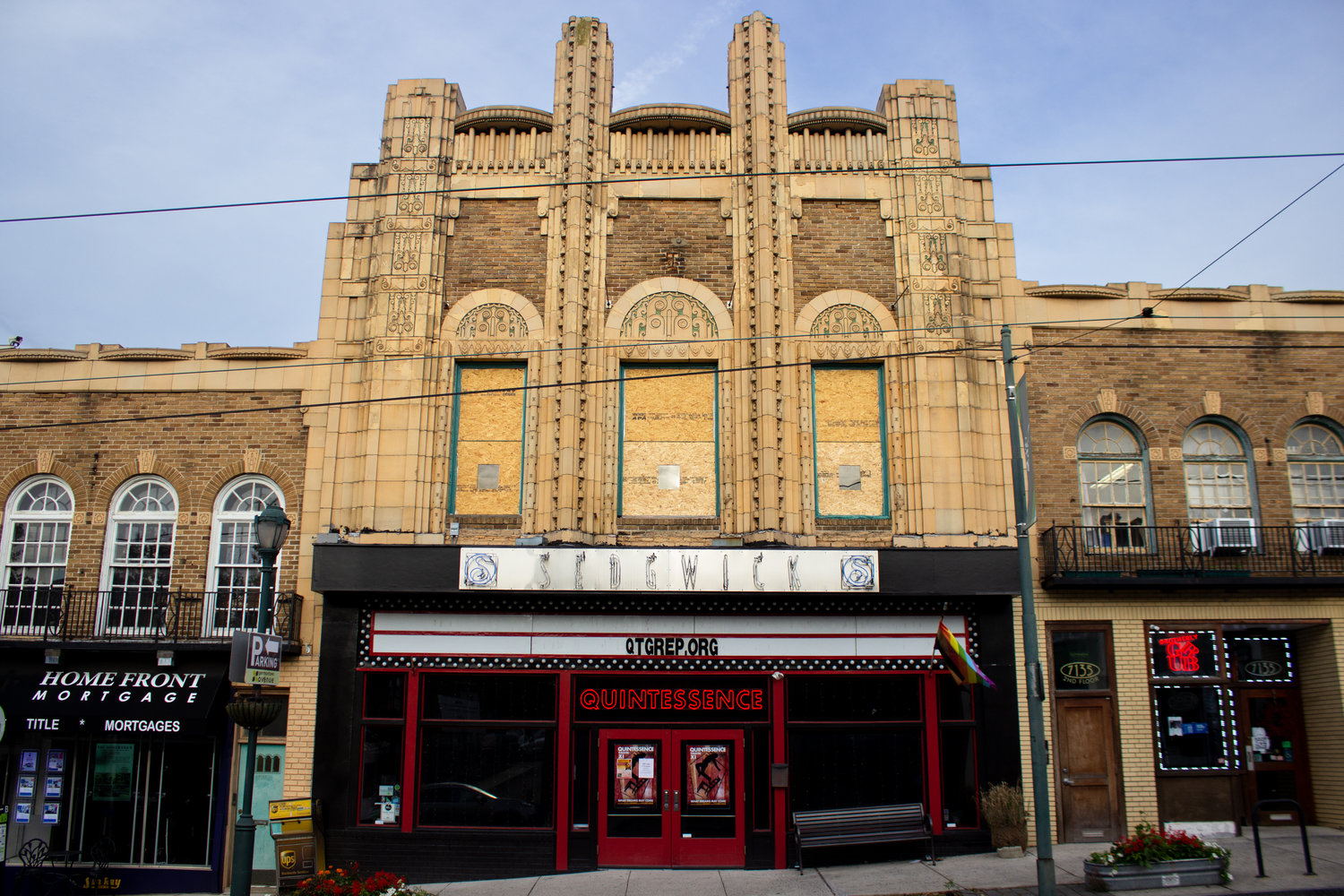 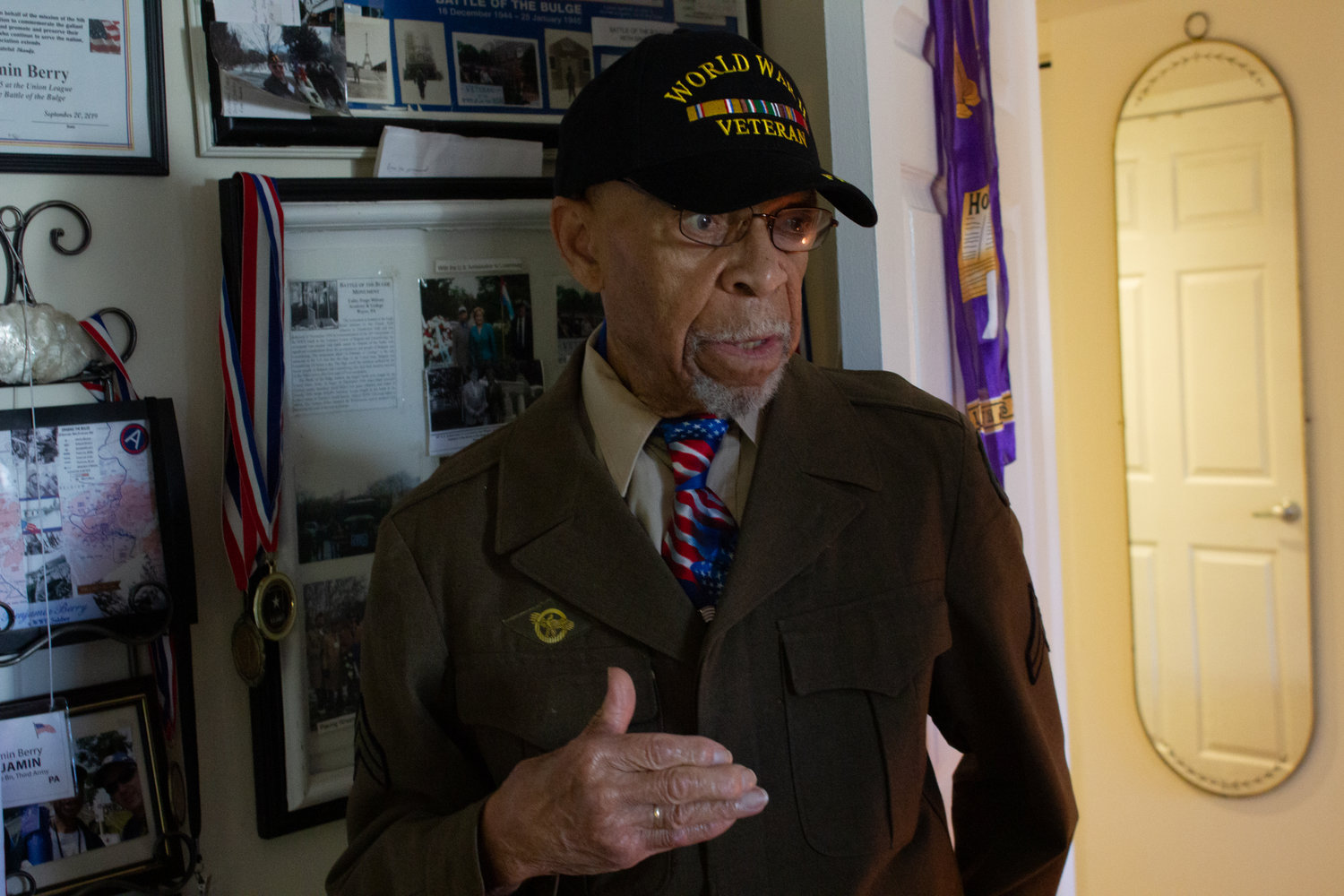 Neighbors in Mt. Airy’s central business district will likely soon see a taller version of the historic building that once housed the Mt. Airy National Bank at 7208-10 Germantown Ave. Developer TierView Development plans to add a two story addition onto the top of the building, behind its gable, and construct a five story building in the adjacent empty lot right next to it at 16 Nippon Street.

The two buildings would be connected, and current plans call for the project to include a ground floor commercial space and 19 apartments. TierView hopes to break ground next year and construction is expected to take 12 months.

The project is part of a trend, as developers are taking advantage of the 2019 upzoning of Germantown Avenue-fronting properties from Allens Lane to Sedgwick Street to plan larger, taller and more dense buildings. The new zoning gives developers the right to build the larger projects without seeking permission from the Zoning Board of Adjustment.

Before the 2019 rezoning, Philadelphia’s zoning code was set up in such a way that most developments taller than 38 feet in Mt. Airy’s business corridor would have to go before the zoning board, a process which triggered an automatic notice to nearby neighbors. Now, that notice isn’t required unless a proposal is taller than 55 feet - leading some residents to complain that they’re left unaware of what’s happening in their own neighborhood.

Some of the neighbors on Nippon Street say they feel that way. Others say they have in fact been in contact with TierView’s principal, Jenn Patrino, and have had a productive dialogue with her.

“We reached out to a representative of the near neighbors to open a dialogue about the project,” Patrino told the Local. “We have corresponded several times, met with them once, and have future conversations already on the calendar.”

The second of those conversations, according to neighbors, is expected to happen this Thursday.

TierView’s plans for the development come in the wake of the recently created Central Mount Airy Commercial Historic District, designated this past July, which extends two blocks along Germantown Avenue from Nippon Street to Mount Pleasant Avenue.

The newly created district, which was nominated for historic designation by the Philadelphia City Planning Commission, is “maybe one of the first examples of the city encouraging that kind of oversight of a business district by the Historic Commission,” said Mt. Airy developer Ken Weinstein.

The new regulations that came as a result of the designation discourage demolition and require permission from the Philadelphia Historical Commission for any façade changes. The commission granted TierView permission to make its proposed changes in September, according to city spokesperson Paul Chrystie.

“We purchased 7208 Germantown Ave in 2015 after it had been sitting on the market for quite some time,” Patrino told the Local in an email. “The building had always stood out to me as a unique and special site and we were thrilled when we were able to acquire it in order to preserve and repurpose it.”

From a zoning perspective, however, TierView’s proposal is considered by right, which means the project is in keeping with its parcel’s zoning, which is CMX 2.5. It's for this reason that no public community meetings about the specific proposal are mandated.

The alterations to the property don’t include any off street parking, a concern to several neighbors the Local spoke to about the project, especially due to the fact that Nippon Street, which only runs one way, only has parking on one side of the street. A recent zoning overlay passed for the district has off-street parking requirements for any new structure of 20 residential units or more. But because TierView’s proposal is only 19 residential units, no off-street parking is required.

Which some residents take issue with. “It’s just really unfair to do that to our block,” Jon Perlmutter told the Local in a phone call. “Where are those people going to park?”

In response, Patrino said her group is “actively working with neighbors to try to find parking for our tenants” despite the lack of a parking requirement from the city’s zoning code.

Adding to Stroiman’s concerns is the fact that some neighbors say a five story building on that parcel would tower over all the other residential buildings in its vicinity.

This is especially a problem for resident Mark Kidd, who lives next door to the property.

“I will no longer have sunlight in my backyard area because there’s going to be a five story building there,” he said. “I used to sit out there and enjoy the sun now that’ll be gone. There’s a deck off my third floor that I won’t be able to enjoy either because there will be two stories stuck in my face.”

Unfortunately for Kidd and other neighbors, taller buildings are part of the city’s rezoning plan. The 2019 rezoning was part of the Philadelphia2035 plan, which is the city’s ongoing mission to rezone the entire city to manage its growth and development.

Public meetings for the 2019 rezoning were held in December 2017 and March 2018. After those meetings, many properties in the corridor, including 7208 Germantown Ave, were rezoned from CMX 2 to CMX 2.5, which is what increased the maximum legal by right building height from 38 feet to 55 feet.

The rezoning’s allowance for taller buildings was the impetus for TierView’s 7208 Germantown Ave proposal, which would top out at 51 feet tall.

“Though we have not max-ed out either the density or the height allowed by the new zoning classification,” Patrino said, “the up-zoning signaled to us that the time had arrived for us to move ahead.”

Neighbor Eric Sternfels, who works as an architect and was present at the initial meeting with Patrino, said he thinks the five story addition along Nippon Street is too tall for the lot. “This parcel is like a postage stamp,” he said. “It’s not a big block of a building. It’s this shard streaming way up high.”

Sternfels also had concerns about the front entrance being along Nippon Street instead of Germantown Avenue, since Nippon is so small.

“It doesn’t make sense for all the deliveries to happen on Nippon,” he said. “All of this stuff [like ubers and deliveries] come and sit on this tiny alleyway instead of being handled on Germantown Avenue.”

Despite his concerns, Sterfels called Patrino “smart” and “tuned in.”

When asked if he felt Patrino was receptive to neighbors’ requests for changes, he replied “absolutely.”

“We don’t want to start a war,” he said. “We understand this is what our city came to suggest is appropriate here, and we want to stay within the context of what’s allowable. There might be workable solutions.”

An earlier version of this story incorrecty referred to TierView Development as TierView Property Management.  The mistake has been corrected.