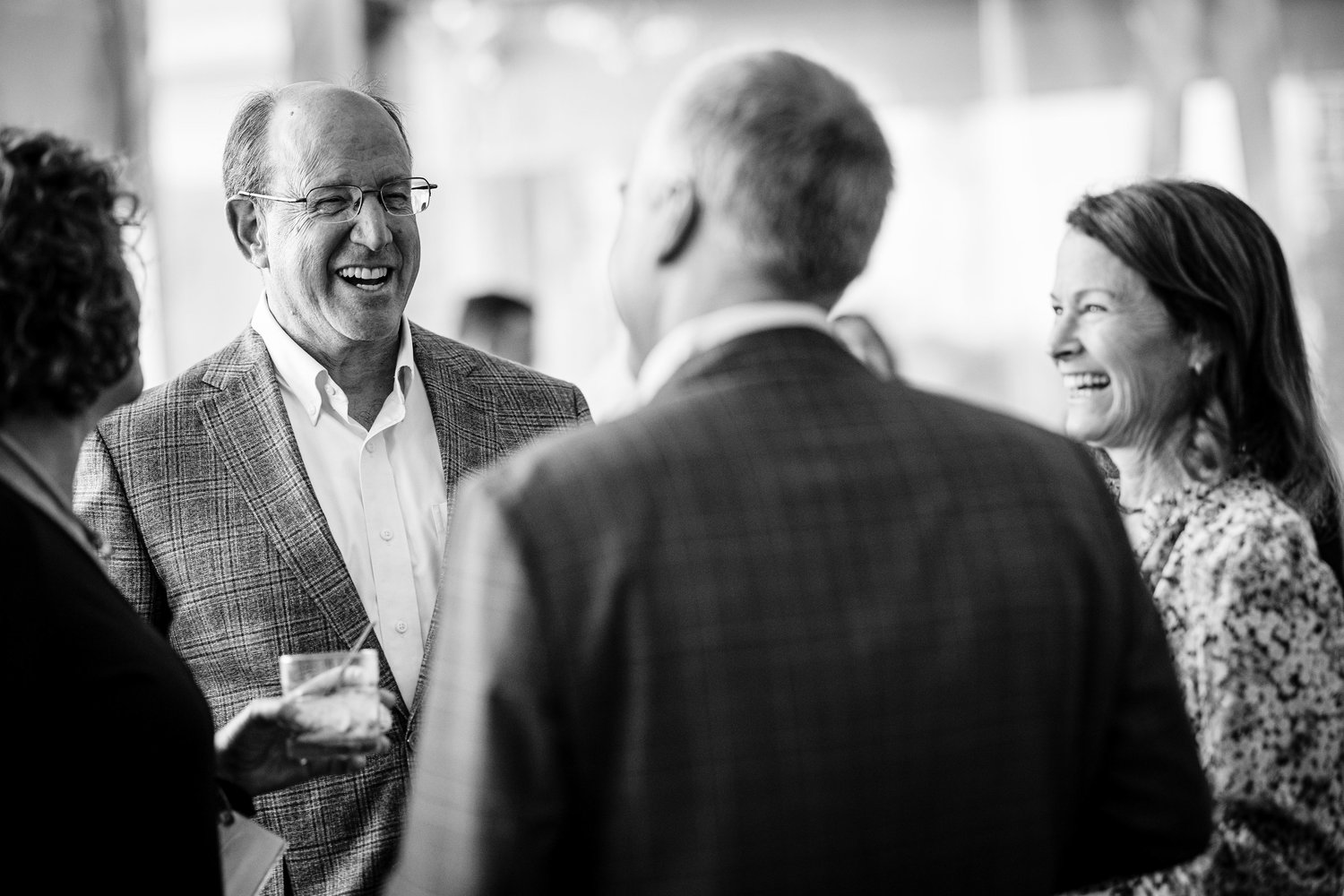 Germantown-based developer Ken Weinstein chats with attendees at a ceremony honoring him for being named the Preservation Alliance for Greater Philadelphia’s first ever recipient of the Mary Werner DeNadai Award.
Photo by SSM Photography
Posted Thursday, September 29, 2022 12:00 am
by Tom Beck

“Ken has dedicated his life to revitalizing neighborhoods and empowering the community,” said Paul Steinke, the Alliance’s executive director. “His work as a preservation-minded, award-winning entrepreneur and do-gooder is legendary. Ken is a natural choice for our first ever DeNadai Award.”

Named for a co-founder of the Preservation Alliance, the Mary Werner DeNadai award is presented to a civic leader who has made a lasting impact in historic preservation.

“My passion is removing blight from Philadelphia,” said Weinstein at the event. “Fortunately, that has led me to save hundreds of buildings over the past 35 years.”

Weinstein serves as president of Philly Office Retail, which has renovated more than 350 deteriorated commercial and residential units in the Philadelphia region over the past 35 years. He serves as board chair of the Philadelphia Housing Development Corporation and also chairs the Mt. Airy Business Improvement District, which he co-founded in 2007.

In a post-event phone call, Weinstein called the celebration “overwhelming” and “surprising.”

“But I felt very honored that the Preservation Alliance would choose me out of all the people doing good work out there,” he continued.

Two properties Weinstein said he is particularly proud of saving are the former Blaisdell Pencil Factory, located at 137 Berkley St. in Wayne Junction, and the former Masonic Hall at 5423 Germantown Ave. in Germantown. The factory is the current site of Attic Brewing Company and Deke’s Garage Roadhouse BBQ and the masonic hall was turned into 16 apartments.

Weinstein said that he prefers to reuse rather than demolish and build from scratch  both because he likes “maintaining the fabric” of communities and because it’s better for the environment.

“The second you demo and put an old building in landfill, you’re not treating the environment very well,” he said. “You’ll always have less waste by renovating what is existing instead of building up with new construction.”

“They have better bones than the new buildings,” he said. “The structure is stronger and there’s a reason why they've been standing for 150 years. So we believe we end up with a better product by restoring.”

Buildings, and also the people who use them

“He has given people the tools to breathe new life into their own neighborhoods,” Evans continued, “instead of catching the next train out.”

In 2015, Weinstein founded Jumpstart Germantown, a program that works to revitalize communities by empowering residents to redevelop their own neighborhoods. It offers training, mentoring, networking and loans to local residents who want to become developers.

Jumpstart, first launched in Germantown, now has seven programs throughout the city and eight more throughout the country. More than 2,000 mentees have graduated from the program, which has loaned them more than $40 million for development projects.

“I’m really proud of this achievement,” Weinstein said. “But the day after the ceremony we went back to work to save more buildings, which is what we do every day.”