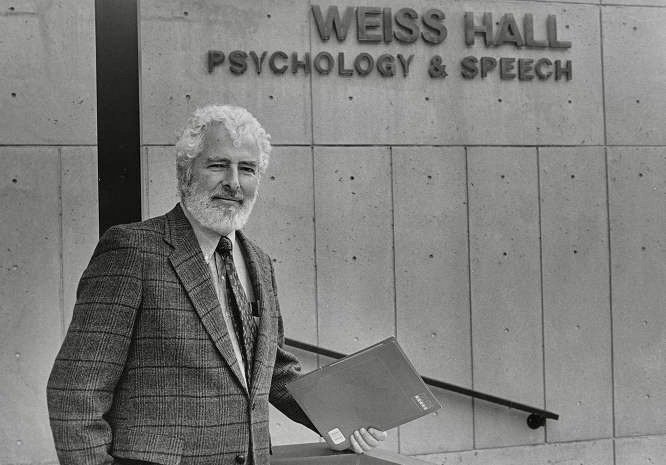 About 150 people came to Germantown Friends Meeting on June 11 to say goodbye to Herb Simons, a revered professor at Temple University for 51 years.
Posted Thursday, June 23, 2022 12:00 am
by Len Lear

In the mid-1960s, when I was a graduate student in English Literature at Temple University, I met a communications professor there named Herb Simons who made an indelible impression on me.

He had movie star good looks, a warm smile, quick wit and a passion for social justice. We shared a strong belief in civil rights and opposition to the Vietnam War, and years afterward I read about his books (seven) and activism on behalf of the oppressed.

So when I learned recently about Simons' death at age 86 of heart failure on April 17 at Presbyterian Medical Center in University City, I knew I had to attend the memorial service for him. The service, which was held at the Germantown Friends Meeting on Saturday, June 11, drew about 150 people. Former students and colleagues, some from other parts of the country, came to share their fond memories of this principled, intellectual giant who lived for 50 years in Germantown with his wife, Gayle.

For example, Bruce Boucek, who grew up on Price Street and now works at Harvard University, recalled, “I was just a kid from down the street who showed up at their house. I was seven, and [Herb’s son] Michael was five. Herb was my adoptive father in many ways, and Gayle was like my adoptive mother. We were making a lot of noise one time, and Herb came downstairs. I was expecting to be yelled at, but he pulled out some games for us to play. He was probably aggravated, but he took the time to be kind to his son's friend. I have many memories like that.”

Roderick Hart, communications professor at the University of Texas at Austin, said, “In my field the person I looked up to most was Herb Simons. He had swagger. In 1973, he walked up to me and said, 'I like your work.' That's all I had, one work. We became good friends. When I came to Philly for a conference and brought my kids, Herb took them to the zoo so I could attend the conference. He was a loud Jewish kid from Brooklyn, and I was an uptight Irish Catholic kid from Boston. The friendship should not have worked, but it did. When I was a nobody, he made me feel like a somebody. That's why I loved him.”

Alan Scult, who taught at Drake University in Iowa, read a statement from Arthur P. Bochner, an emeritus professor at the University of South Florida who could not be there: “We were colleagues for more than 50 years. He was so much fun. I met him in 1972 when I was 27. He charmed me with his wit and keen mind. How do you describe a man so unique? I never met anyone like him. He loved conversation, but there was no small talk. He inspired and encouraged me. He is one of the few men I can honestly say I loved.”

Miles Orvell, a Chestnut Hill resident and director of graduate studies in English at Temple University who has taught there for 51 years, said, “I had a wonderful history with Herb of so many conversations … 'Seinfeld' was a frequent reference for Herb. He was also a Marxist, a Groucho Marxist.”

Nicholas Nehez, a former neighbor, commented, “I had an experience with Herb that impacted my whole life. When I was in their house, I had the overwhelming feeling of a loving, caring household. In my youth, you did not see dads a lot. My own father was a bit of a mystery. I read an article that said fathers only spend an average of five minutes a day with their children. Herb once came over to us and said, 'I want my five minutes!' He shaped who I am today as a father.”

Born in Brooklyn in 1935, Simons earned his undergraduate degree in 1956 from the University of Vermont and his doctorate in communication from Purdue University in 1960. He met his wife-to-be, Gayle Breuninger, a former Peace Corps volunteer in Nigeria, in 1967 at a Center City party. They married on Oct. 30, 1969. “He was so charming and handsome,” she said last week. “He could bring people together from all over the country.”

Simons, who started teaching at Temple in 1960 and stayed there until his retirement in 2008, founded and advised a debate and discussion group at Temple and in 1998 started the Temple Issues Forum, which featured debate and discussion events on controversial issues such as the death penalty. Some of the events were broadcast on WHYY’s “Radio Times.” Many of Simon's former students stayed in touch with him.

Jeff Leshin, Herb's nephew, recalled, “Herb had a wonderful sense of humor, which he got from his mother, who was the funniest and most generous person I have ever known. He grew up in a Jewish community in Brooklyn, where social justice was very important. I have benefited from his generosity my whole life.”

Herb liked to take his family sailing, said his son, Michael, a 1991 Germantown Friends School graduate. “He wasn’t a great sailor,” Michael said, “which was part of the fun. We had to be towed in quite a few times.”

In addition to his wife and son, Simons is survived by three grandchildren, nephews and nieces.