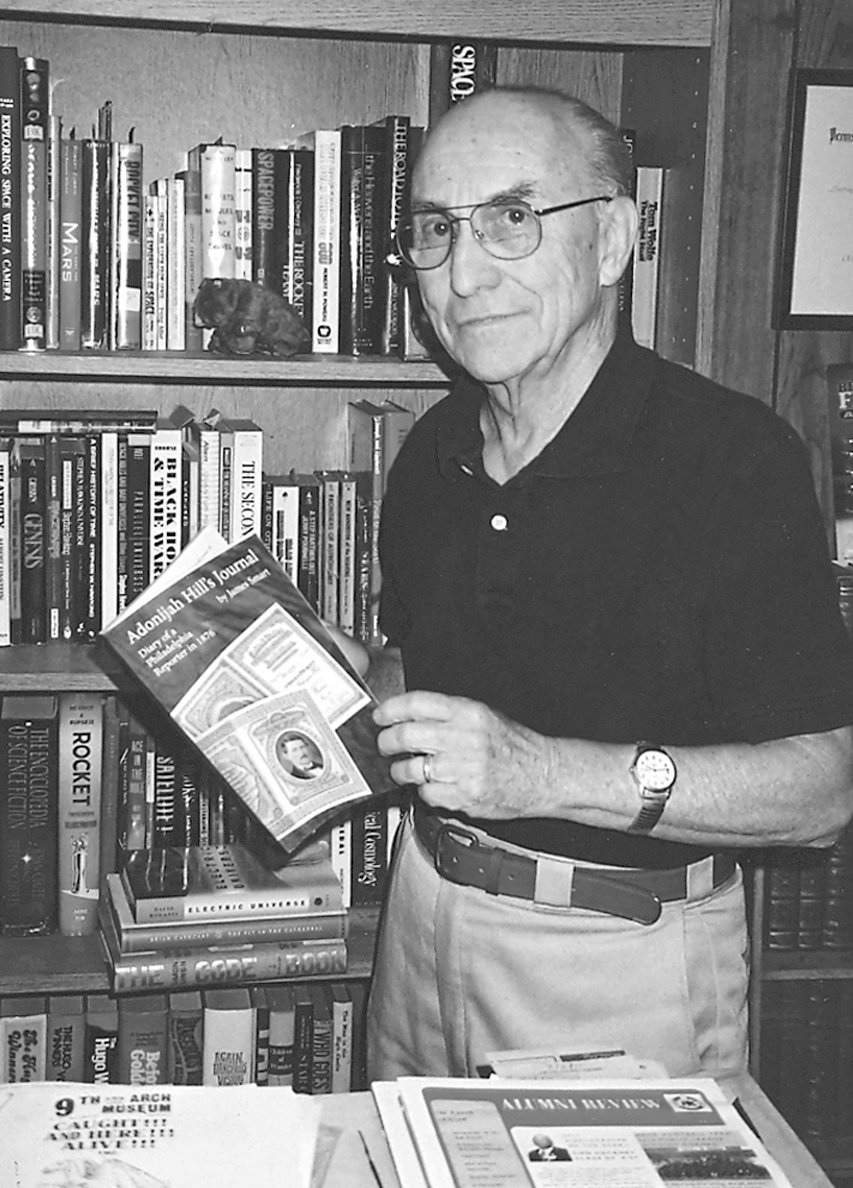 Writer James Smart, who died April 15 at age 92, was a Mt. Airy resident for 36 years. He wrote articles, columns (starting with the Philadelphia Bulletin) and books about Philadelphia history.
Posted Wednesday, May 4, 2022 11:26 am
by Len Lear

I once told James Smart he had the perfect last name. Because he most certainly was.

The 36-year Mt. Airy resident, who wrote countless fascinating and entertaining articles for many area publications, including the Chestnut Hill Local, died April 15 at the age of 91.

Smart, who was an avid reader of the Chestnut Hill Local, once told me that “an attempt to estimate how many articles and columns I have written makes my head hurt.”

“My Dad was very proud of being a columnist,” Smart's daughter, Leslie Zavodnick, told the Local last week. “He was a good man and a great dad. He was always there for us and for everything we were involved in. He always treated us like people, even as kids.”

He was also a serious history buff. “He gave us so much knowledge about history when we were kids,” Zavodnick said.

Smart came from humble beginnings and he never went to college. But he was an avid reader with a voracious curiosity - something he learned from his father, whose formal schooling ended before high school.

“My father accumulated books by the dozen, and I read them all and still have them, hundreds of them - complete works of Dickens and Mark Twain and later writers such as Sinclair Lewis and H. G. Wells; mystery stories and history,” Smart told me once. “He was a prodigious reader. He subscribed to the morning Record and Ledger, the evening Ledger and the Bulletin. But he wouldn’t read the Inquirer because he said it was anti-union.”

Smart's father worked in hosiery mills on the looms that made ladies’ silk stockings. His mother worked in the accounts payable department at Strawbridge’s department store. Neither stayed long in formal school - his father left in the seventh grade and his mother in the ninth.

Smart, who attended Northeast High School when it was located at 8th Street and Lehigh Avenue got a taste for newspapers early.

He wrote his first article for Northeast’s student newspaper while still a freshman, a short humorous piece about a man who built the first telephone booth and didn’t know what to do with it. (He called his friend, Alexander Graham Bell, and said, “Hey, Al, are you busy tonight? Could you invent something to put in this thing?”)

By his senior year, Smart was sure that he wanted to write for a living.

“I sold two articles and a short story to a magazine, making a total of $75, more than my mother made in a week,” he told me. “When graduation approached, I foolishly turned down a scholarship to the University of Pennsylvania. The principal asked me what I wanted to do, and I said, 'work for The Bulletin.'”

In 1948, Smart started as a copy boy at the Bulletin, and wound up working there for 25 years.

He was in the features department one night when Frank Brookhouser, whose column made him a friend to celebrities, got a call from singer Dinah Shore, who then had a weekly radio program. She was in town; did he want an exclusive interview? Brookhouser couldn’t do it because he had a regular evening radio program, so Smart was sent. His article ran the next day.

Smart then received more and more assignments. In 1958, he wrote a long series of articles about teenage gang violence that won the “Best News Writing of the Year Award” from the Philadelphia Press Association. In 1959, he began writing the venerable “In Our Town” column, six days a week, about human interest anecdotes and Philadelphia history.

When Smart's column was discontinued in 1973, he resigned in protest. He worked briefly for a public relations firm, but The Bulletin lured him back as a freelancer. He created a daily history column during the bicentennial years of 1975 and 1976. In the late 1970s, he edited two failing business publications, and in 1982 began providing editorial services for Mellon Bank.

He retired from Mellon in 1990 and began writing a weekly column for the Roxborough Review, which was picked up by 20 other papers of the Intercounty Newspaper chain.

In 1995, he published a book of his humorous columns, “Soggy Shrub Rides Again.” In 2001, he wrote “Historic Philadelphia; an Illustrated History.” In 2011, he published “Adonijah Hill’s Diary,” an ingenious journal of a fictitious Evening Bulletin reporter in 1876, the Centennial year.

Smart, a virtual Google of Philadelphia history, lived in Bucks County with his first wife from 1961 to 1973 when she passed away. He moved to Center City and met his second wife, Barbara Torode, whom he married in 1977 and who died in January of 2019. The couple moved to Mt. Airy in 1986, where they raised their family. Survivors include two children, Leslie Zavodnick and Stephen Smart, three grandchildren and six great-grandchildren, a sister, and nieces and nephews. Funeral services were handled by Jacob F. Ruth Funeral Home in Chestnut Hill.

For more information, visit jamessmartsphiladelphia.com. Len Lear can be reached at lenlear@chestnuthilllocal.com