"The Queen's Gambit" Netflix series was recently nominated for Golden Globes awards for Best Picture and Best Actress. More than sixty million people have watched it. Though the novel the series was based on has been around since 1983, it has been hardly known outside of chess fan circles. 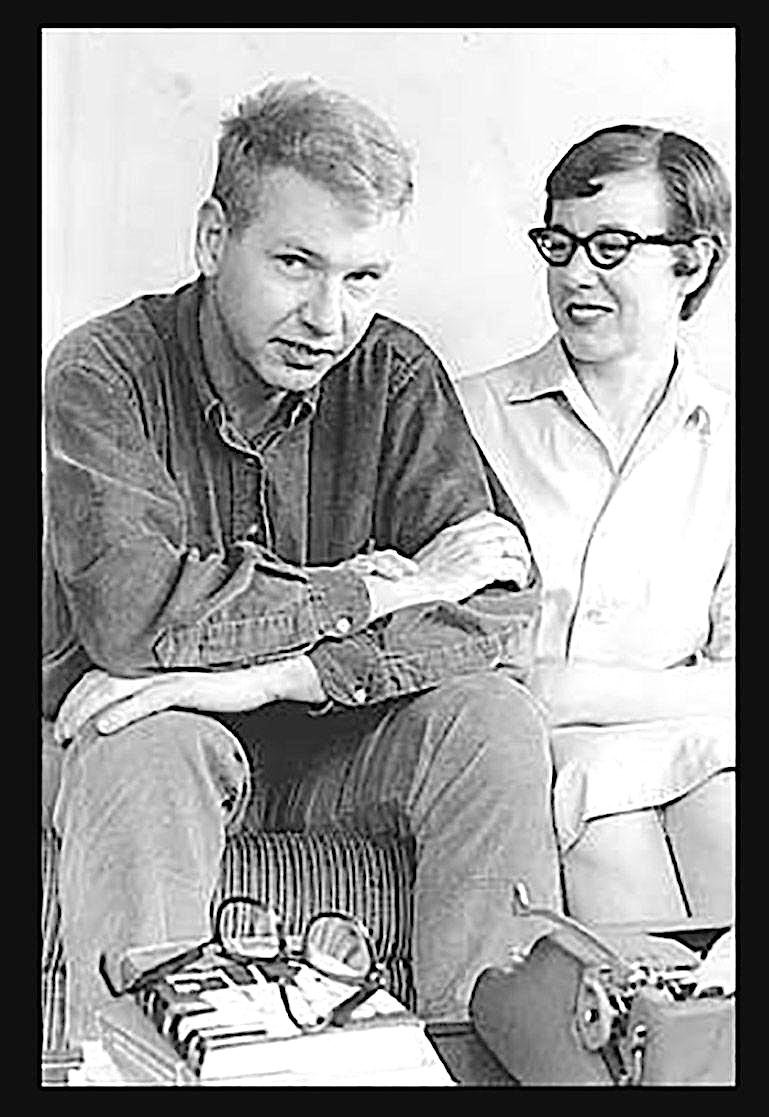 Walter Tevis and his wife Jamie Griggs in better days, photographed on the cover of Griggs’ memoir, "My Life with The Hustler."
Posted Wednesday, February 17, 2021 11:12 am
by Hugh Gilmore

"The Queen's Gambit" Netflix series was recently nominated for Golden Globes awards for Best Picture and Best Actress. More than sixty million people watched the miniseries during its seven-week run. Though the novel the series was based on has been around since 1983, it has been hardly known outside of chess fan circles. Since the series hit its stride, however, sales of the book (and chess sets) have boomed. The author of that novel, however, has remained obscure, despite the fact that millions of people are familiar with his work.

Walter Tevis was a true American original whose thoughts and interests carried far beyond his humble origins in Bardwell, Kentucky. He was a tall, ungainly, rather awkward-looking young man, the kind of high school teacher students made fun of and nicknamed Ichabod Crane. But he was a very friendly guy and once he got to talking and telling stories, he struck nearly everyone he met as funny, entertaining and thought-provoking. He taught at Carlisle High School, where he was well-liked. The school was so small the only two single teachers were Walter and a young Home Economics teacher named Jamie Griggs, whom he started palling around with.

Their life together would have been Mr. Peepers-ish, except Walter declared early and often that he wanted to be a writer. He told Jamie that when he'd lived in Lexington the year before they met that he’d taken a writing course at the University of Kentucky with A. B. Guthrie, Jr. Guthrie was the author of the very successful "The Big Sky," and had won a screenplay Academy Award for the 1954 western film, "Shane." Guthrie liked Tevis' writing and encouraged him to keep at it.

Jamie Griggs liked hanging around with Walter because he had big ideas. Unlike other young men she knew, he’d already successfully served in the navy and had traveled. But his ideas of being a big New York writer someday seemed like far off dreams to her.

Walter wrote a couple of stories in that college class that went nowhere, but Guthrie sent one of them, a pool-hall story called "The Best in the Country" to an agent friend. While waiting to learn the fate of that story, Jamie and Walter married during Christmas, 1952. He mentioned casually, "Don't expect me to give up drinking." (An ominous statement, since Tevis spent most of his adult life as an alcoholic and could not write when he was drinking.) Small-town life droned on. Then in April of 1953, a check for $350.00 arrived for "The Best in the Country." For teachers earning $200 a month it seemed a princely sum. By 1955 Walter had sold several more short stories to magazines. Walter's agent recommended that Walter turn “The Best in the Country" into a novel.

He let the idea steep while he worked some other jobs, including a stint editing for the State Highway Department. The job was dull and he began writing fiction again whenever he could. He turned the short story "The Best in the Country" into a novel titled "In a Green Shade" and received a $1,000 advance on signing the contract. Soon after that, the book's title was changed to "The Hustler." In 1959, Rex Lardner wrote a New York Times review that said, "This is a fine, swift, wanton, offbeat novel." Time magazine praised it as "smoky... seedy, intense, sharply alive."

Encouraged by those reactions, Walter enrolled at the Iowa Writers Workshop. While there he decided that he needed a foreign environment to write in. He, Jamie, and their (by then) three children went to live in Mexico, Walter bringing along an unfinished manuscript called the "Immigrant,” which soon got published as "The Man Who Fell to Earth." (Soon after, made into a movie with David Bowie as the alien.) While that piece of good luck was happening, "The Hustler" also got made into a movie with Paul Newman, Jackie Gleason, Piper Laurie and George C. Scott. It won five Academy Awards, including Best Picture. Years later, "The Hustler" was revamped by Tevis as "The Color of Money," and made into a Martin Scorsese movie, with Paul Newman again and Tom Cruise. Those are just the books that got turned into movies. Tevis also wrote dozens of short stories and four more novels.

The first reaction of many people upon seeing the diversity of Walter Tevis' output is to wonder how one mind could create such wildly different kinds of stories. After knowing more, however, the next level of amazement comes from realizing that these stories have many common elements: a sense of alienation; a deeply-seated, perhaps neurotic, need for risk-taking; a sense of victimization; an urge to push the limits of others; and an ultimate need to lose and feel oneself to be the victim of oppressive circumstances.

Many of the scenes in Tevis' books and movies are almost directly autobiographical – being abandoned as a child; being bullied in an institution; being silenced as an institutionalized child by adults who gave children dangerous tranquilizing drugs to keep them quiet; raging alcoholism; the need to prove to some outsider-father-inner critic that one is not a loser. And ultimately: the need to be a loser. Tevis said in a 1983 interview that he coined the term "a born loser" in "The Hustler."

Though still little known, Tevis's reputation as a major 20th-century writer is growing. Certainly, his popularity post-"Queen's Gambit" is at an all-time high. All of the major used-book websites are currently price-gouging his books, asking hundreds of dollars for used paperbacks.

I recently read and enjoyed a memoir written by Tevis' wife, Jamie Tevis, recounting the 27 years of marriage they both endured and enjoyed. Called "My Life with The Hustler" (2003), I had to obtain it via interlibrary loan from a small-town library in Clark County, Kentucky. It was a very entertaining book and provided a lot of backstage stories about Walter Tevis that would be otherwise unknown.

As the saying goes, "No man is a hero to his own valet." Or first wife, left for another woman when the real money started coming in, and after he sobered up.