Lifelong Mt. Airy resident Chantel Holland will never forget the time she walked into an institution where she has been accepted as a member of the corps de ballet only to meet with problems.

Mt. Airy resident Chantel Holland will never forget the time she “walked out of the rehearsal hall and cried” because of what she believes was mistreatment based solely on her skin color. 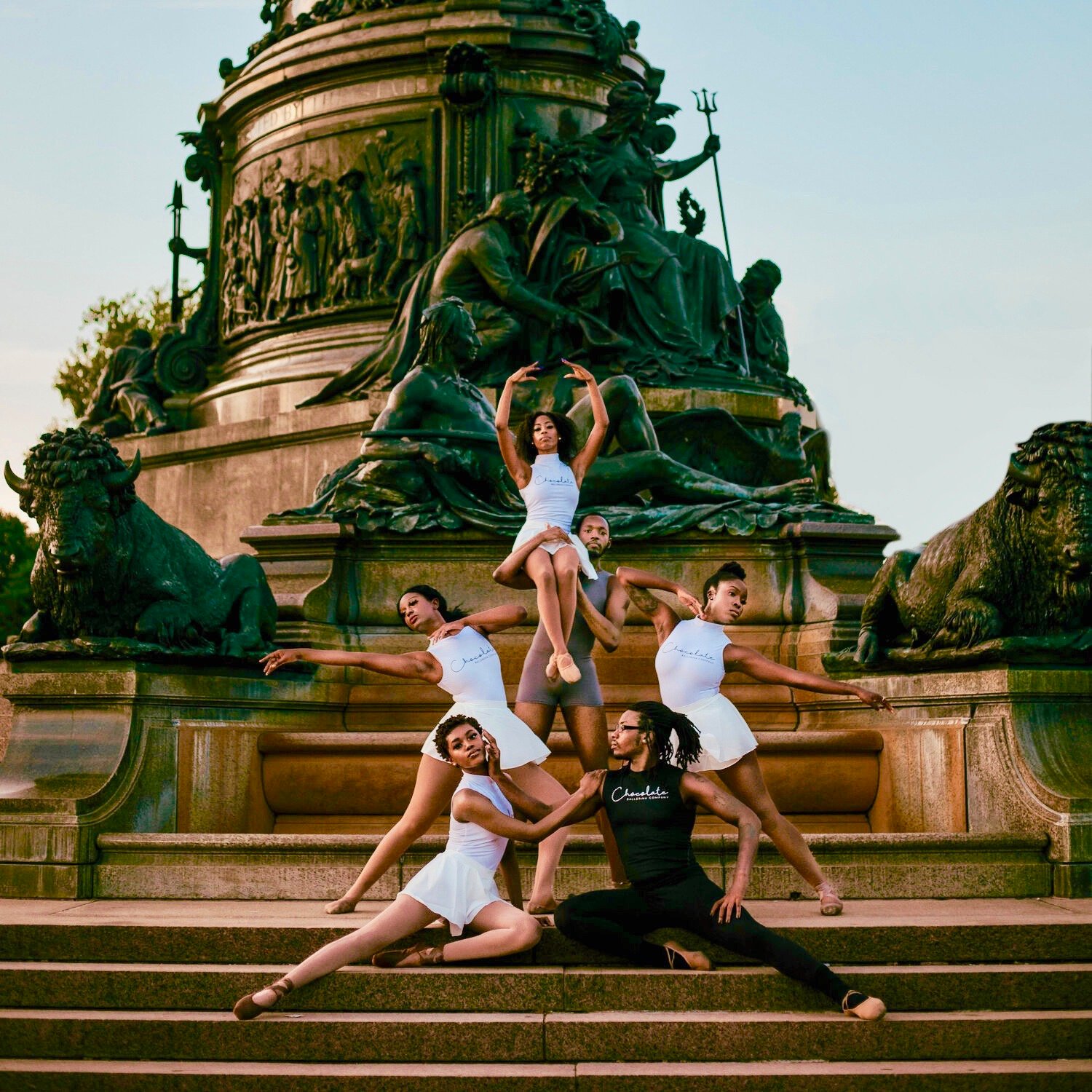 Members of the Chocolate Ballerina Company demonstrate the skills they have learned from Chantel Holland.
Previous Next
Posted Wednesday, May 5, 2021 10:00 am
by Rita Charleston

Lifelong Mt. Airy resident Chantel Holland will never forget the time she walked into an institution where she has been accepted as a member of the corps de ballet only to meet with problems. “Maybe it was because of the way I looked or the way I walked,” she said. ”They looked at me as though I was in the wrong place. And even though I showed them my acceptance letter and put on my pointe shoes, I was the only black girl there. I was so hurt that eventually I walked out of the rehearsal hall and cried.”

Many factors contribute to ballet's lack of diversity: economic inequality (ballet training is very expensive); a lack of role models for aspiring dancers to emulate; a failure on the part of schools and companies to provide support for young dancers of color and, of course, racism. Former American Ballet Theatre executive director Rachel Moore told  Pointe magazine in 2014, “There are people who define ballet in a very specific and historic sense and think it should look like the Mariinsky (a famous Russian ballet company) in 1950,"

“I have great memories of growing up in Mt. Airy, and I still live there today near my mother and grandmother and other relatives. To me, Mt. Airy is home,” said Holland, a dancer, teacher and founder of Chocolate Ballerina Company.

“Growing up, I always wanted to be a dancer and started taking lessons when at age 11, often traveling to New York for lessons.” Later, following her high school days at Franklin Learning Center, Holland was accepted into The Alvin Ailey School, a world-class training program for aspiring dancers. She  also studied at Koresh Dance Company, The University of the Arts, National Dance Institute NYC and Wissahickon Dance Academy in Germantown.

She trained with Philadanco as part of their apprentice company and danced as part of the Sixers junior dance team. She went on to receive her Bachelor of Fine Arts in Ballet from Temple University. She was also named 2010 Choreographer of the Year, NAACP-ACT-SO's (the Academic, Cultural, Technical, and Scientific Olympics) and 2011 Gold Medalist.

But Holland soon realized not every would-be dancer was as lucky as she. “So in 2017 I decided to start my Chocolate Ballerina Company, a contemporary community-based dance organization dedicated to supporting the hidden talents in youth and adults in various local communities. I realized the black community had little opportunity to display their dance talents, and there was even less knowledge of ballet in the black culture.”

At first, Holland, now 30, admits it was acting that caught her eye.”That happened when I began attending the New Freedom Theatre acting program. Acting became a huge passion in my life,”she said, “especially when I began performing with legendary Philadelphia actors like Johnny Hobbs, Jr., Walter Dallas and others.”

Still, Holland could never fully let go of her love of dance and desire to share. And so her ballet company was finally born. And Holland is quick to take dance beyond the traditional studio and theater environment. “We are committed to pursuing innovative outreach initiatives to serve economically-challenged youth. Past outreach partners include Mt. Airy Playground Recreation Center, Temple University, Upward Bound Program and others.”

The experience of Holland breaking down in tears over a racial rejection only strengthened her resolve to provide opportunities for other black dancers. “Our company's mission is to illustrate the struggles and successes of African American artists. I hope to soon franchise The Chocolate Ballerina, especially in communities all over the country that have never experienced such a thing before. And, believe me, if I can accomplish my goals, with our help and leadership, others can, too.”

The Chocolate Ballerina Company will conduct a workshop on Sunday, May 9, noon to 2 p.m., at 1802 S. Broad St. For more information: chocolateballerinacompany.com. Rita Charleston has been writing for many years about local actors and others in the arts for the Local and other publications.