The Raconteurs (from left) Jack Lawrence, Jack White, Patrick Keeler and Brendan Benson. by Pete Mazzaccaro It’s only natural that two of the leading keepers of the guitar rock flame these last 20 … 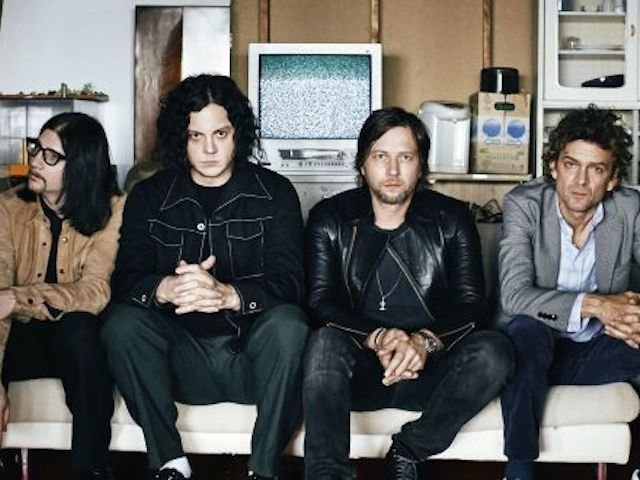 It’s only natural that two of the leading keepers of the guitar rock flame these last 20 years – Jack White (The Raconteurs, The White Stripes) and Dan Auerbach (The Black Keys) – would release new albums a week apart. While one record finds a band renewed and in top form, the other lacks much of either quality.

The Raconteurs, “Help Us Stranger”

Jack White, whose White Stripes song “Seven Nation Army” has become one of the most regularly-played stadium anthems since Queen’s “We Will Rock You,” formed the Raconteurs in 2005 with fellow Detroit rock frontman Brendan Benson. The project, which added bassist Jack Lawrence and drummer Patrick Keeler, was a marked change from the guitar and drumonly sound of the White Stripes, a band at the peak of its popularity at the time.

The Raconteur’s first single, “Steady as She Goes,” was a firecracker of a rock tune. Brisk guitars up front, a Pixies-esque dynamic of quiet verse to loud, rollicking chorus. It opened White’s songwriting to a broader sonic palate than what he had in the White Stripes. And no offense to his White Stripes partner, Meg White, but the Raconteurs were musicians who matched and complimented his talents. It was a good band.

Now, 11 years after its last album, the Raconteurs is back together with “Help Us Stranger,” a 12-song tour de classic rock force. Sharing songwriting duties, Benson and White weave from Zeppelin and Black Sabbath-esque riff rock to acoustic guitar and organ-backed fair that recalls Traffic and Blind Faith.

White has always teetered on the precipice of falling into the trap of being a wax museum piece – a performer who wears the pastiche of old garage and blues rock acts of the past. There is an element of truth to the criticism. There are no new sounds on “Help Us Stranger,” but the performances are quite good. The result is a record that is irresistibly fresh and energetic. It’s still a good band.

When I first heard the Black Keys in 2003, on their second record, “Thickfreakness,” I vastly preferred them to the White Stripes. Auerbach and his partner in drums, Patrick Carney, were sharper, haunting and satisfyingly weird, and they took the guitar-drum duo sound a step further. It was a step into delta blues that sounded more authentic.

The band’s latest, “Let’s Rock,” its first in five years, sounds light-years away from the vitality that made those early records interesting. While the Raconteurs gave White more to explore, the full-band sound of the Black Keys has produced a meandering 14 songs that do little to distinguish themselves. Too often, Auerbach sounds like he’s channeling the spirit of Steve Miller (ask your parents, kids). It’s the sound of a greatest hits blues rock act fit for the tape deck of an AMC Gremlin.

That may sound harsh, but I suspect Auerbach and Carney are capable of better than this. Where the Raconteurs resists the trap of being imposters, the Black Keys fall in head first, refried blues lick after refried blues lick.

Liner Notes is a new, regular column on music from an admittedly Gen X point of view. The author’s actual music can be found at WinstonsDog.com. Feedback on the column can be sent to pete@chestnuthilllocal.com

Donate now to CH Local
The Latest
Crime Report: 2 retail thefts, 3 retail thefts and a stolen bracelet
Crime Report: 2 retail thefts, 3 retail thefts and a stolen bracelet The following crime report is for crimes reported in Chestnut Hill and Mt. Airy for the period between April 12 to April 18. …
The Township’s Workshop Meeting heats up over the Haws Lane Tract Development
The Springfield Township’s workshop meeting on April 12 took a decidedly heated turn when it came to discussing the latest proposal to develop an institutionally zoned tract of land at 380-402 …
Take on our biggest crises with 30 Million Solar Homes
Solar power can help tackle three interlocking crises our community and country are facing: economic downturn caused by COVID, impending climate disaster, and profound social injustice. We can take …