Vermont-based organ builder Stephen Russell, the project’s supervisor, has faced the loss of members of his work force, as well as the temporary shuttering of several of his regular suppliers. 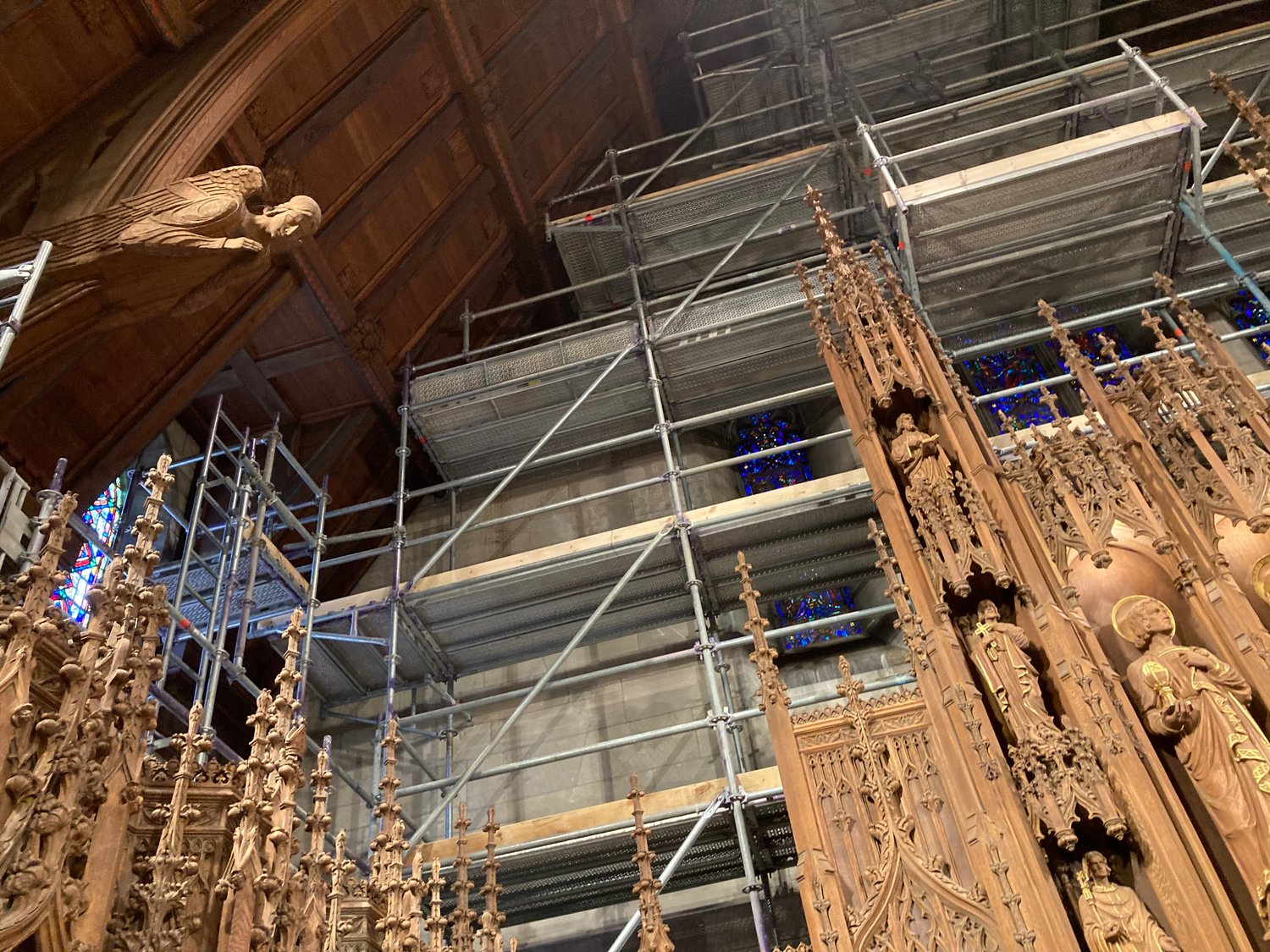 “We had originally hoped for the restoration of the pipe work and the replacement of the console to be completed by the summer of 2022,” said parish music director Andrew Kotylo. “It could take possibly another year.” 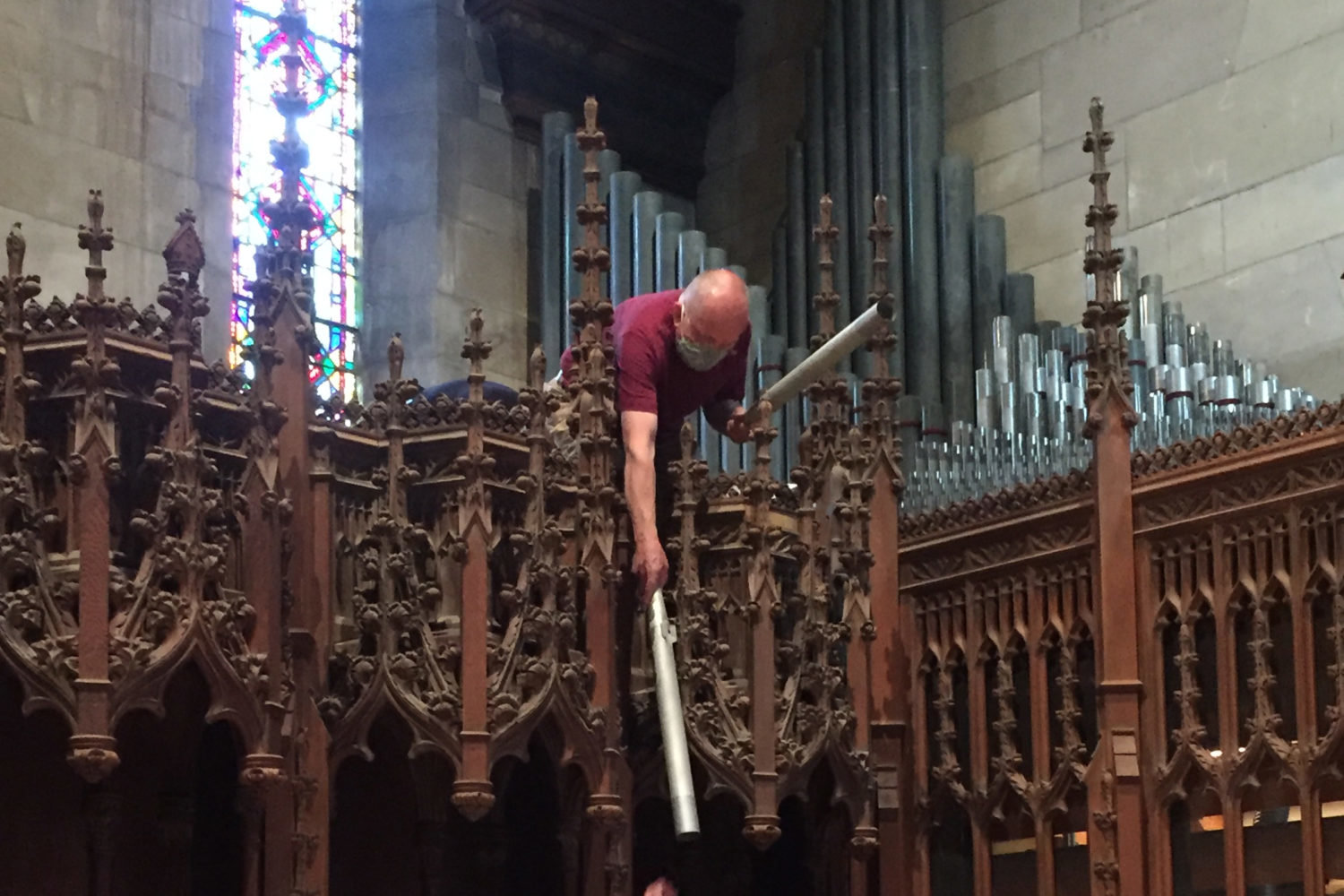 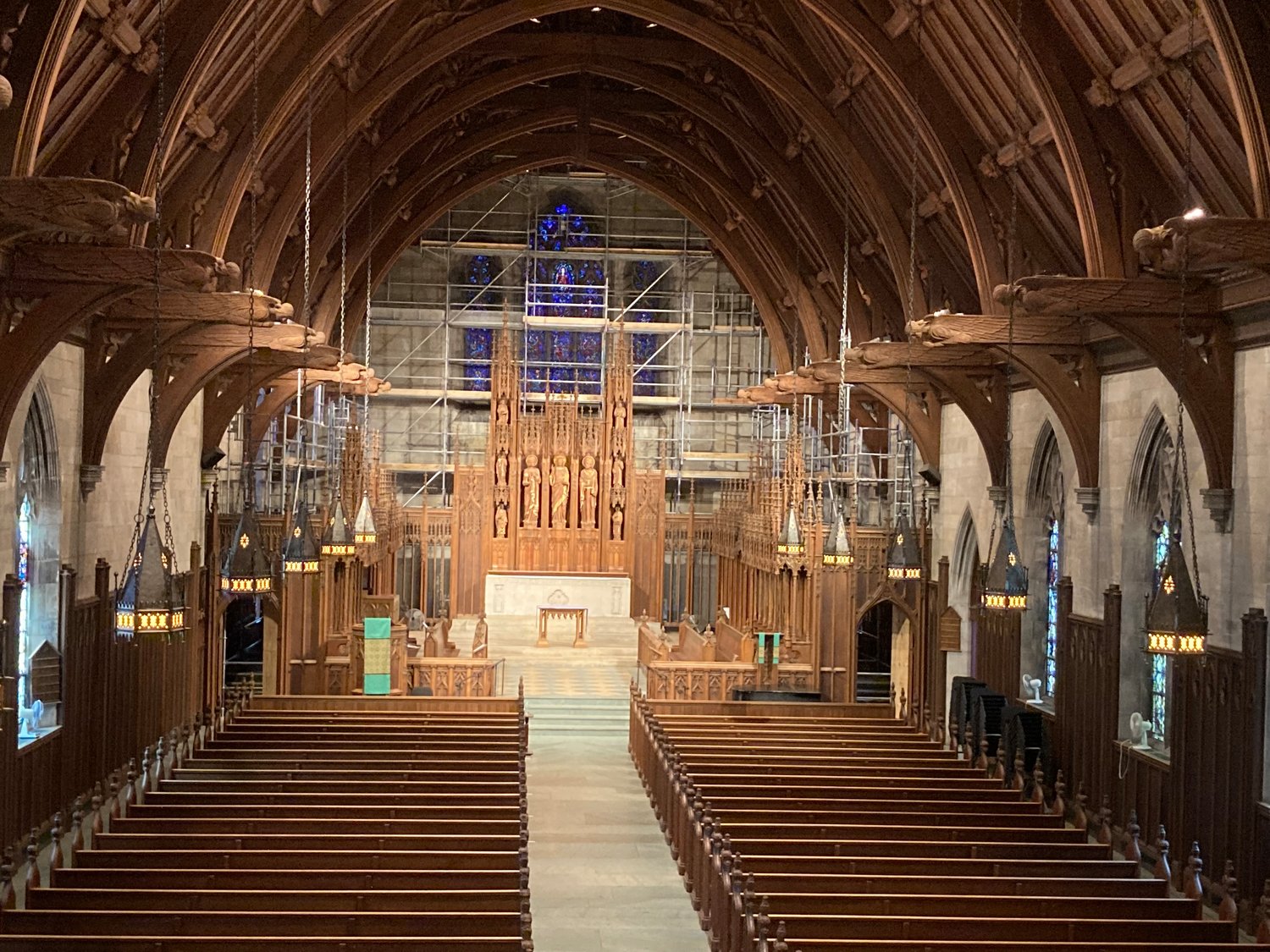 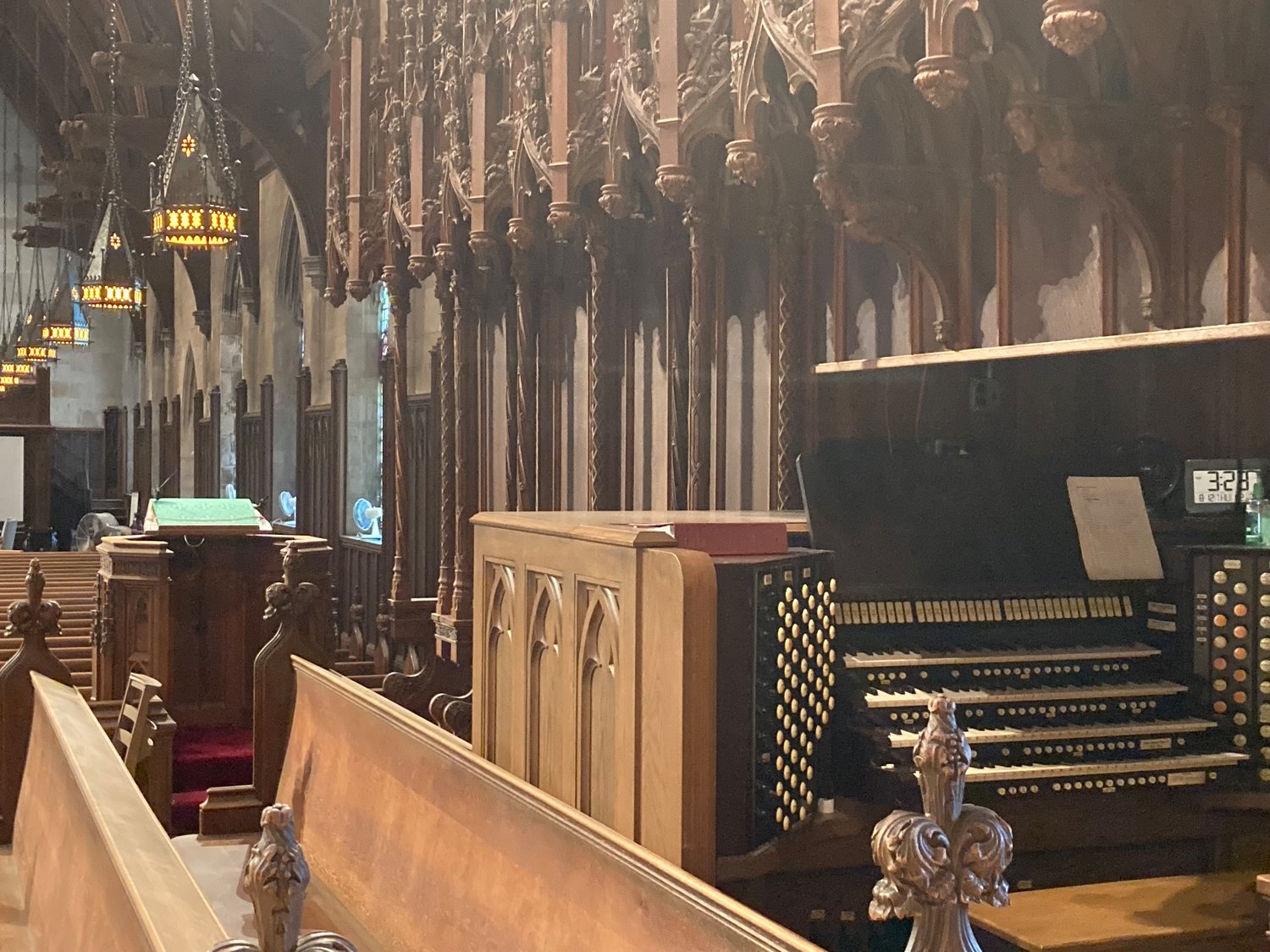 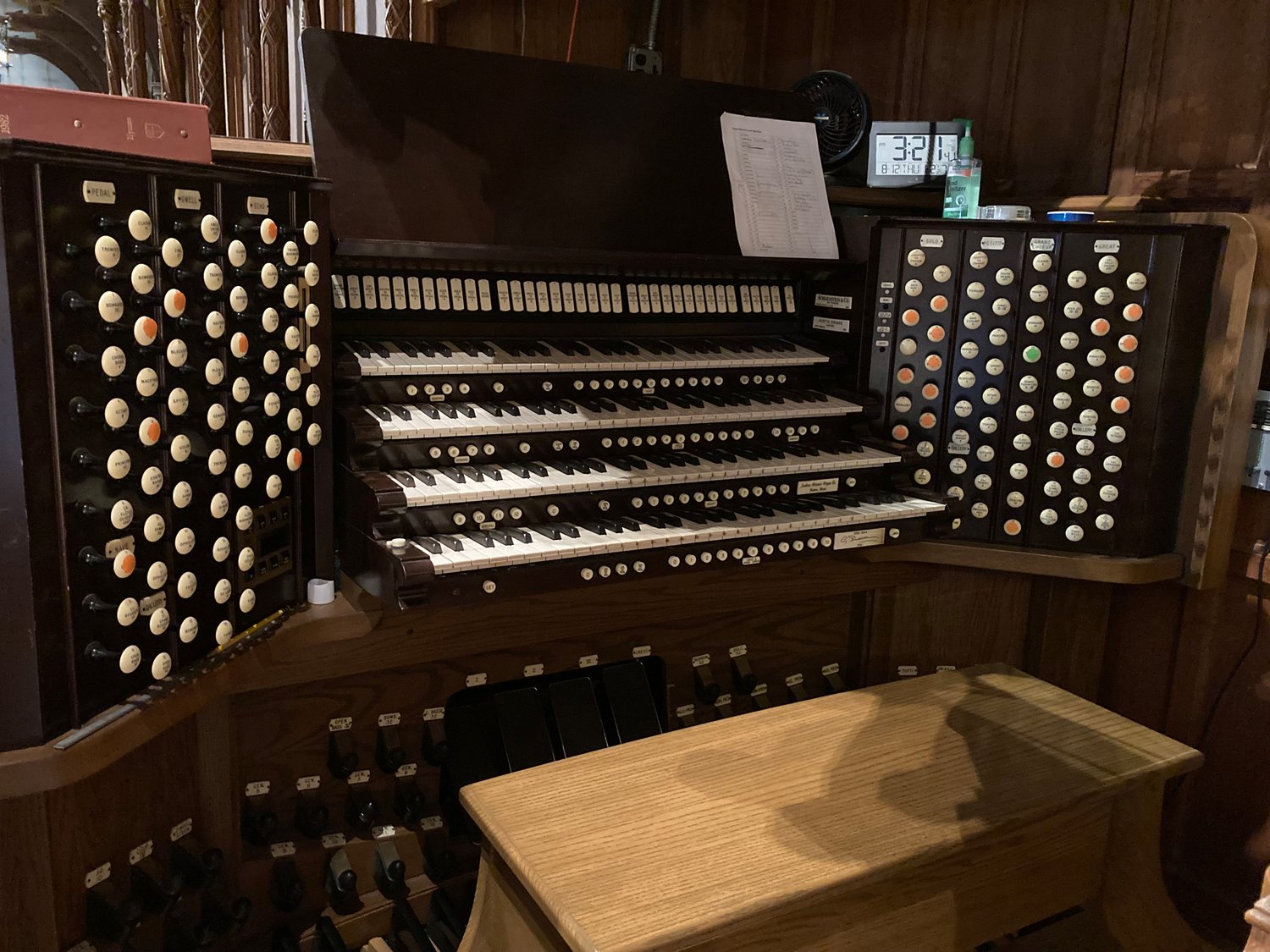 The COVID-19 pandemic continues to impose its negative impact on our lives even as many of us strive to return to what once was considered “normal.” As the powerful and virulent Delta variant spreads its misery across our country and the world, projects both big and small continue to struggle to regain their footing.

Here in Chestnut Hill, one of the community’s most extensive projects continues to face delays due to the economic and corporate dislocations affecting virtually every part of the American economy. That project is a major renovation of the Aeolian-Skinner pipe organ at St. Paul’s Episcopal Church.

Boasting 114 ranks of registrations and nearly 7,000 individual wooden or metal pipes, the church’s organ is one of the largest church organs in Greater Philadelphia and unquestionably among its most colorful. Its sheer size and tonal diversity assured that its renovation– as well as the replacement of its console – would be a major undertaking even during the best of times.

Beginning in the first months of 2020, “the best of times” no longer applied to life across the globe. The uncontrolled spread of the coronavirus brought the world precariously close to “the worst of times.” As a result, even the best-laid plans have gone awry.

“The COVID-19 coronavirus lockdown has had a ripple effect on the project to restore the church’s pipe organ,” parish music director Andrew Kotylo recently told me. “The result has been that our time lines are now more fluid than they would have been without the pandemic.”

Kotylo explained that Vermont-based organ builder Stephen Russell, the project’s supervisor, has faced the loss of members of his work force, as well as the temporary shuttering of several of his regular suppliers.

“He builds his own consoles,” Kotylo added. “All the components. He’s dependent on several individual suppliers. For example, he uses a company in California that has been forced to shut down its operations. Another supplier in Canada has been unable to fill a major staff position. Finding the right suppliers is extremely important because the organ’s new console has to be designed around those parts.”

Kotylo pointed out another repercussion of the lockdown: the steep increase in the price of many of the materials that go into restoration a pipe organ.

“The price of wood has literally tripled since the start of the project,” he said. “It all comes together, so we’ve had to adjust our schedule. We had originally hoped for the restoration of the pipe work and the replacement of the console to be completed by the summer of 2022. It could take possibly another year.”

Fortunately for St. Paul’s parishioners, the church has the continued use of an extremely capable digital electronic organ to tide it over until the “real thing” returns to Chestnut Hill. It may not proffer the physical presence of a pipe organ – how one actually moves the air in its space to produce its plethora of sounds – but it manages surprisingly well under the present circumstances.

“The pipes will be returning in chunks,” Kotylo explained. “First the central ranks in the chancel, the swell division, and then outward. Little by little, we’ll be phasing out the digital stops.”

St. Paul’s Church will celebrate its first Choral Evensong of the season Sunday, Sept. 26, at 5 p.m. Kotylo is hoping for the return of the full choir of volunteers to augment the singing of the eight core professional vocalists. The parish will mark the Solemnity of All Souls with a performance of Gabriel Faure’s “Requiem Mass” Sunday, Nov. 7, at 5 p.m., “Christmas Lessons & Carols” Dec. 19, and “Epiphany Lessons & Carols” Sunday, Jan. 16.

In yet another sign of a return to normalcy, the Kotylo and the choir are planning a trip to England for the summer of 2022.

“We’ll be spending ten days there,” he smiled. “We’ll be taking part in liturgies at Exeter Cathedral and at Southwark Cathedral, singing four services at each. English and American repertoire, of course! So, I’m feeling optimistic.”

Piffaro recorded Kyle Smith’s “Vespers” in 2007; the CD was released in 2008 on the PARMA/Navona label, not during the 1990s on the Dorian label as was previously reported.