Rescuing stray dogs from all the way in Puerto Rico

Carmen, a 14-year old therapy dog, is a sato, which is Puerto Rican slang for a mixed-breed stray dog. She was found on “Dead Dog Beach” on the southeastern shore of Puerto Rico.

Rescuing stray dogs from all the way in Puerto Rico 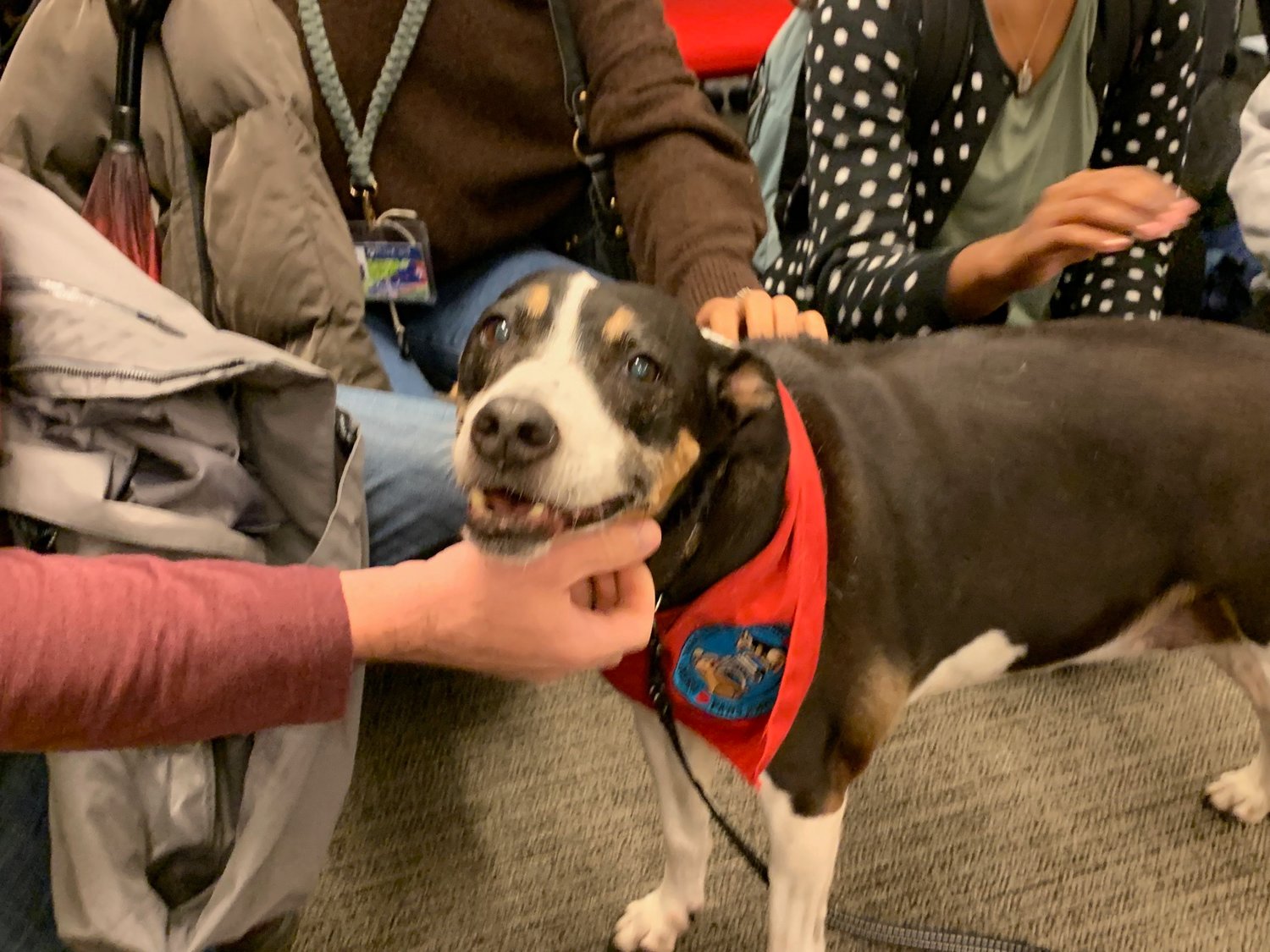 Carmen, 14-year old, is a sato, which is Puerto Rican slang for a mixed-breed stray dog. She was found on the southeastern shore of Puerto Rico, where dogs are often abandoned and left to die.
Posted Wednesday, December 29, 2021 12:00 am
by Barbara Winkelman

“Having a therapy dog is wonderful for many reasons,’ said Debra Malinics of Chestnut Hill. “They’re so sweet. They’re able to give their love to as many people as they can.”

Carmen is a 14-year old canine hero with a humble beginning. She is a sato, which is Puerto Rican slang for a mixed-breed stray dog. She was found on “Dead Dog Beach” on the southeastern shore of Puerto Rico, where dogs are often abandoned and left to die.

Carmen was a small puppy on this beach when she followed two students from Boston University who were making a film about the plight of the satos. After she trailed them for eight hours, they brought her to Amigos de los Animales, a local animal shelter that rehabilitated the puppy. She was spayed and given vaccines, among other veterinary treatments. From there she was sent to a dog shelter in New Jersey, where she captured the hearts of Malinics and her husband, Bernard Fetchko.

Carmen, then six to eight months, was an easy, naturally loving dog. Carmen was so sociable that Malinics’ friends suggested that she look into making Carmen a therapy dog.  Within six months of adopting Carmen, Debra took her to get tested as a therapy dog at the Suburban Dog Training Club in Wyndmoor. The test was administered by a certified trainer with Therapy Dogs International (TDI).

The instructor was unsure that Carmen should be tested because she did not participate in “Canine Good Citizen” training, which is basic obedience training provided by the American Kennel Club and which most therapy dogs have earned. “Yet she still took my $45.00,” said Malinics. Out of 13 dogs, she was one of three that passed the test, mostly consisting of staged distractions.

With no formal training, but with a lot of love, Carmen has been a therapy dog for 13 years. She works with a program in Montgomery County called “Tail Waggin’ Tutors.” It helps children learn to read by having them read to dogs.

Carmen has also been involved with the efforts to de-stress students at Temple and Penn Universities, which contact Malinics when they would like Carmen to visit, usually at the beginning and end of the semesters. Students sit with Carmen and pet her, and she licks them. They usually feel better after these encounters. She is also a therapy dog for the Gift of Life Donor Program. She visits with the children and their families who are staying in the nonprofit’s accommodations while they wait for organ transplants.

“I think that dogs’ emotional capacity is much deeper than ours,” Malinics attested. “They know if a person needs some love…(and) they want no reward.”

For example, last year when Carmen was visiting with students at Penn Dental School, Debra noticed that Carmen was no longer near the students. “She rarely wanders off,” explained Malinics. She found Carmen in the back of the room licking the hand of a young man who was on crutches because, he told Malinics, he had been in a car accident. He was not a dental student, but was a friend of one of the students. He told Debra that when he walked into the room, he saw Carmen look at him, get up and approach him.

“He said, ‘She knew exactly what to do to make me feel better,’” said Malinics.

Carmen may be intuitive, but Debra is an individual who believes in giving back to the community. Malinics has sat on boards of local arts organizations and been a mentor for small businesses. She founded and sold Debra Malinics Advertising (DMA) and now runs Communication Matters, a firm that offers consulting in marketing, advertising and numerous forms of communication and messaging.

There is a sato or stray dog crisis in Puerto Rico, a territory which is no bigger than the state of Connecticut but has 500,000 stray dogs, according to The Sato Project, which rescues satos. There are only five shelters for all 78 municipalities in Puerto Rico and they are so overwhelmed that they euthanize more than 94% of their animals. The problem has arisen from the multitude of natural disasters in Puerto Rico, which leaves many animals abandoned and lost. The government also does not strictly enforce its neuter laws.

For more information and to donate, go to thesatoproject.org.