An appeal hearing held to challenge the proposed five story, 34-unit apartment complex at 10 W. Bethlehem Pike was delayed Wednesday afternoon when a witness for the city didn’t show up. 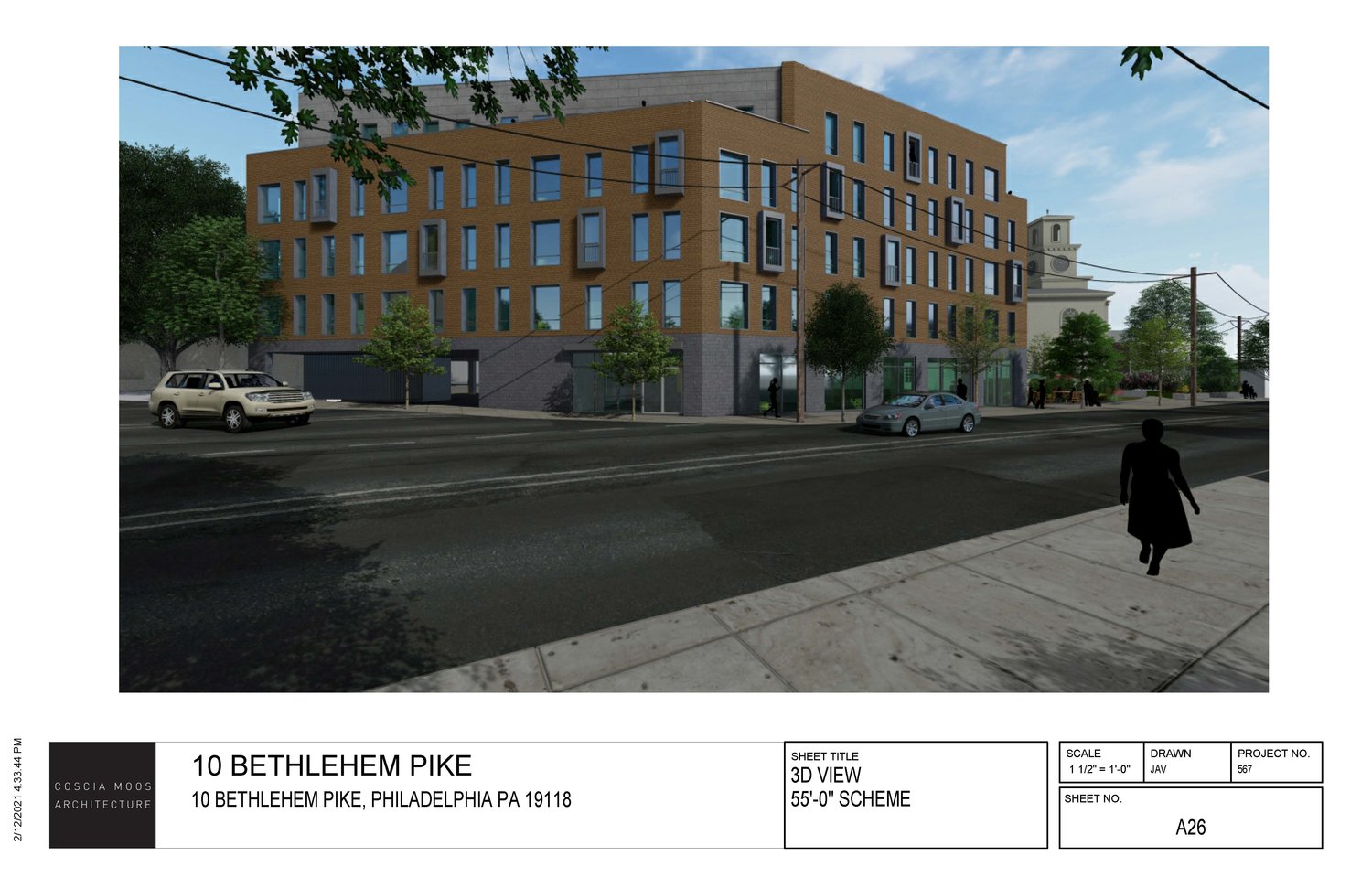 An architect’s rendering of a planned retail and apartment complex at the corner of Bethlehem Pike and Germantown Avenue. The Chestnut Hill Baptist Church is shown behind the proposed building. 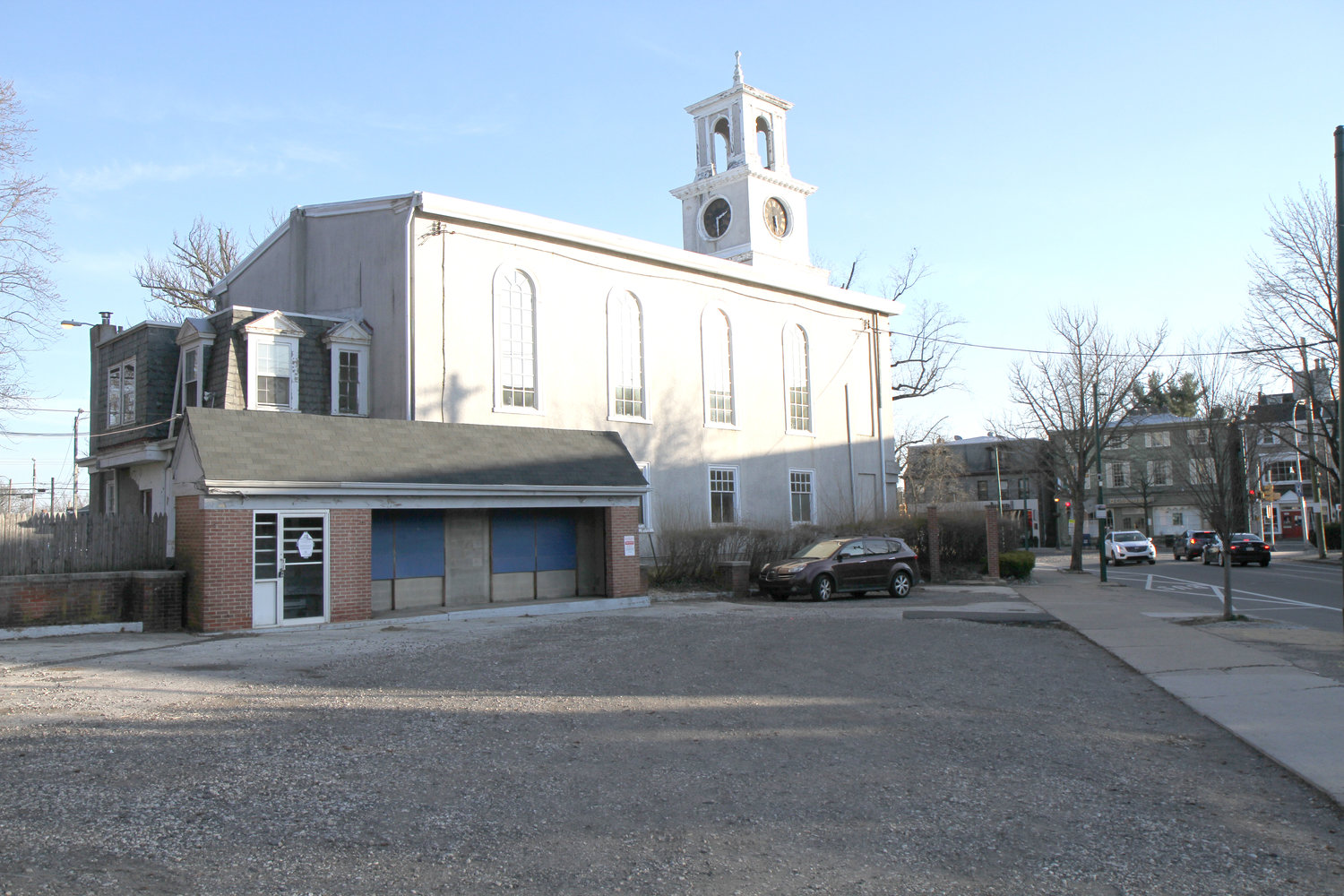 In a stroke of luck for Chestnut Hill residents opposed to the proposed five story, 34-unit apartment complex at 10 W. Bethlehem Pike, an appeal hearing held to challenge it was delayed Wednesday afternoon when a witness for the city didn’t show up.

The three parties involved – the developers, the residents’ association and the city – debated for about five to ten minutes on whether to start the hearing and finish it later, when the city’s witness could testify, or to simply schedule the entire meeting for a later date. To the development team’s dissatisfaction, the final decision ended up being the latter.

Not only does the continuation of the meeting delay the project further, but it also puts the development team’s ability to acquire a property tax abatement in jeopardy. The laws regarding property tax abatements are set to change at the end of the year. If developer Frankel Enterprises fails to obtain a building permit by Dec. 31, things could get dicey for the company.

The development team’s attorney, Carl Primavera, hinted at this during the meeting.

“The city is requiring that we put up hundreds of thousands of dollars in permit fees in order to move forward with the [tax] abatements,” he said. “We don't think that this [hearing] is something that needs to be delayed.”

According to city spokesperson Paul Chrystie, a zoning permit must be issued before the building permit can be issued. And the zoning permit for 10 W. Bethlehem Pike, which was originally issued in April, is precisely what’s being appealed by the Chestnut Hill Community Association.

Chrystie couldn’t say how pending changes of the city’s tax abatement policies would affect this specific property. However, judging by Primavera’s reaction to the meeting’s continuance, the prospects for getting the current abatement don’t seem to be good for the development team.

“There's a priority of time for the project because of the whole issue regarding abatements and permits,” he stipulated, “and the appeal was filed in May so we've been anxious to have this hearing.”

The property at 10 W. Bethlehem Pike is the former site of a Sunoco gas station. The Zoning Board of Adjustment granted developers an automatic zoning permit, saying that the project was not asking to exceed what the current zoning allows for that piece of land. This is what’s known as a “by right” status, which means that the owner has the right to build whatever the law allows, and doesn’t require approval of either the zoning board or neighborhood residents.

But the CHCS disagreed, and filed an appeal with the city’s department of Licenses and Inspections, arguing that because the proposed building would come right up to the edge of the lot line, it would not in fact comply with current zoning code.

“The community and obviously the near neighbors felt that a project that size was very detrimental to that location - it's right as you're coming into Chestnut Hill,” said Anne McNiff, executive director of the Chestnut Hill Community Association. “It was really a hardship to the neighbors and the church.”

That historic church - the Chestnut Hill Baptist Church - is mere feet away from where the apartment complex would be built. Neighbors are concerned the building would block light from entering through the church’s stained glass windows.

“The Baptist Church is a historic landmark,” said McNiff, “and the highest point in Chestnut Hill.”

David Fineman, the zoning attorney the CHCA hired to fight the permit, declined to comment for this article. Frankel Enterprises did not return requests for comment.

Neighbors, who overwhelmingly disapprove of the project, have three main concerns with the project: the aesthetics, the lack of what they feel is sufficient parking (only eight parking spots are proposed for the 34 units) and the density.

Jeff Duncan, a near neighbor of the project who has helped organize resistance to it, said that neighbors would like to see the building use “materials that are more consistent with the character of Chestnut Hill,” he said, like stone and brick. Duncan also would like to see the developers add more off street parking to the proposal.

Duncan said he would also like to see the building’s upper floors tiered back “like a wedding cake.”

“They should make it smaller so the upper stories get setback more,” he said. “Right now it just goes straight up.”

The problem with these arguments, however, is that the neighborhood association can’t appeal the zoning permit on the grounds of its appearance, parking or density. None of that is outside the zoning code. It feels its best argument to fight the project is to challenge the setbacks of the proposal, meaning how far setback it is from the street.

“Our contention is that the setbacks are not applied correctly according to law,” said McNiff. “That is the basis for the appeal.”

On Bethlehem Pike, Duncan told the Local, the building wouldn’t have a setback according to the development team’s current plans. Renderings of the project confirm this is true.

“It goes right to the sidewalk,” he said. “There’s no setback at all.”

The setback should be, he said, should be 35 feet.

In the meantime, negotiations between the CHCA and Frankel have gone on in the background. Neighbors want a prettier, more parking friendly and less dense apartment building. Frankel Enterprises most likely does not want its proposal getting delayed in the appeals process.

“We've been having discussions with the developer and they initially had said they would make some changes to the plans based on meetings that we had,” said McNiff. “We subsequently heard from their attorney that they are not interested in making changes to the plans but asked us to give them a list of changes that we were asking for.”

At the time the Local spoke to McNiff, she said she had sent the development team the list, which she declined to share with the Local, “more than a week ago.”

“We have not heard back from them,” she said.