The change removes another Allen, a former enslaver

A crowd of community activists, faith leaders, residents and government officials gathered in West Mt. Airy Monday to celebrate the renaming of Allens Lane and the Allen Lane Train Station in honor …

The change removes another Allen, a former enslaver 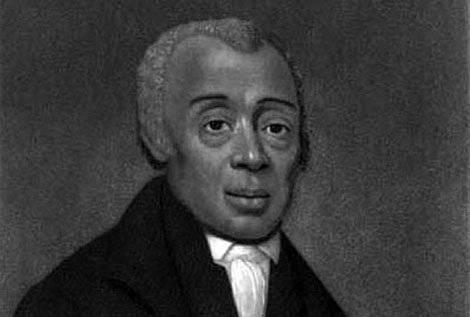 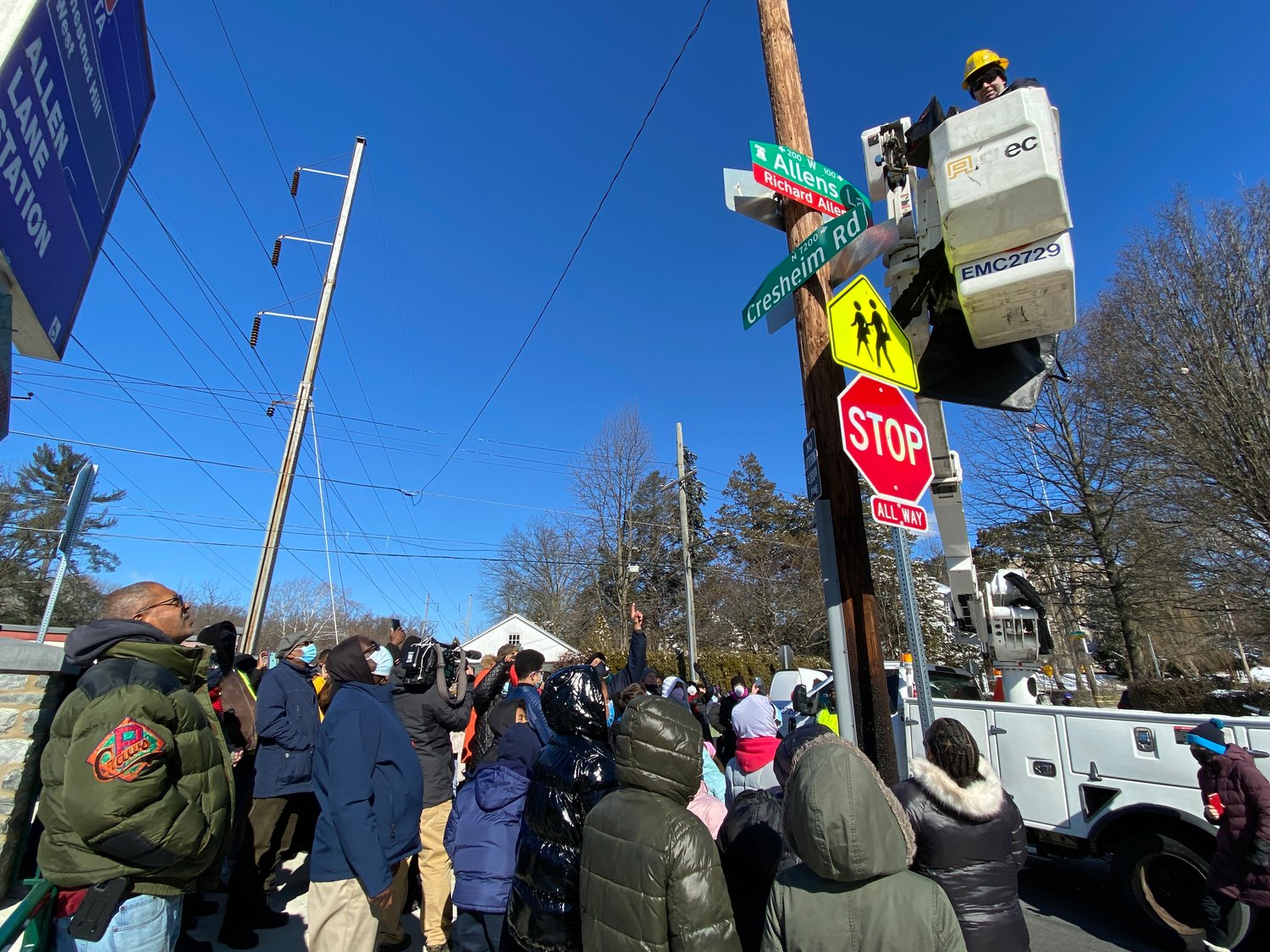 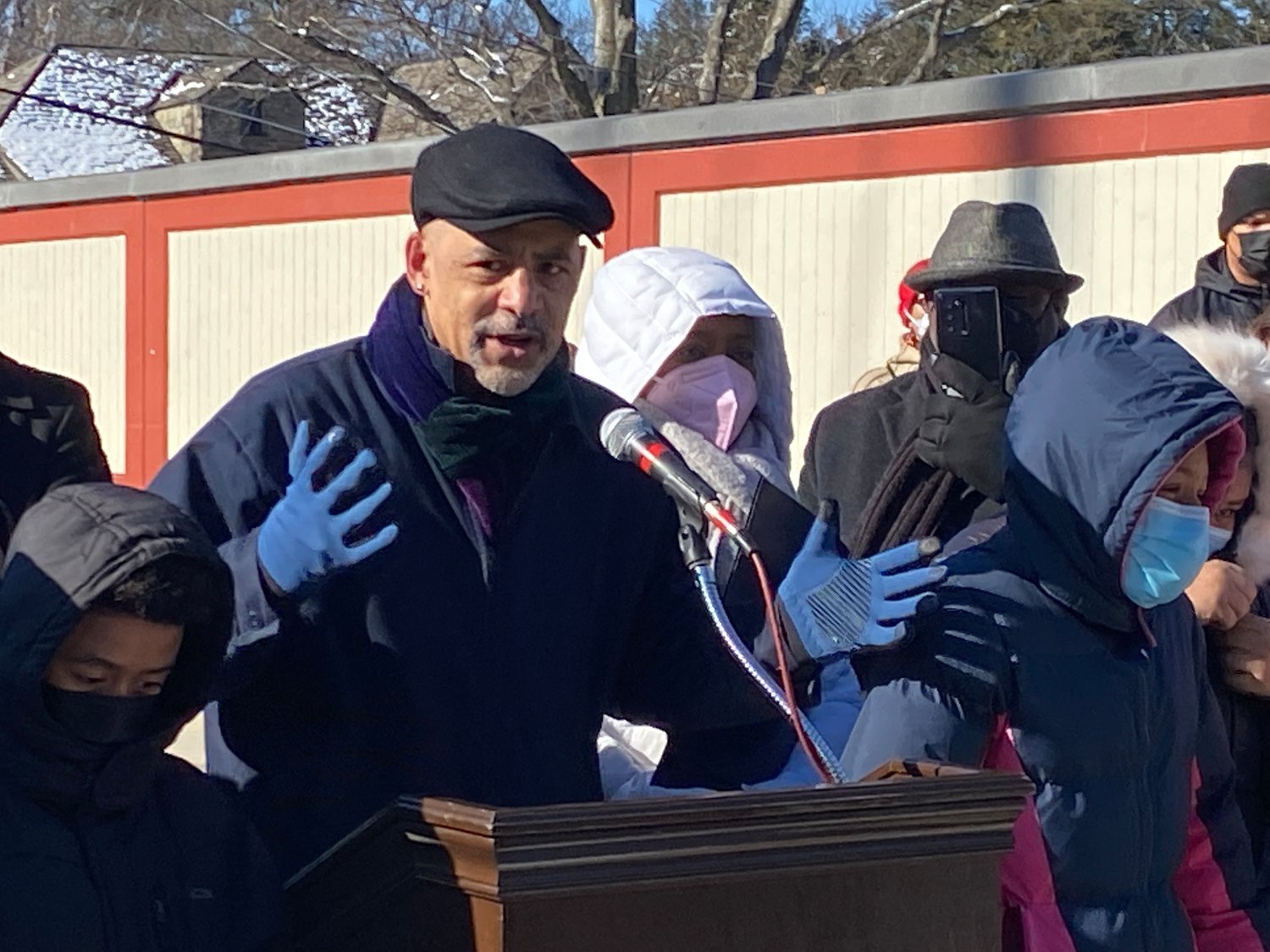 State Rep. Chris Rabb speaks to a crowd celebrating the renaming of Allens Lane and the Allen Lane Train Station in honor of Bishop Richard Allen. Photo by Tom Beck
Previous Next
Posted Wednesday, February 16, 2022 6:00 am
by Tom Beck

A crowd of community activists, faith leaders, residents and government officials gathered in West Mt. Airy Monday to celebrate the renaming of Allens Lane and the Allen Lane Train Station in honor of Bishop Richard Allen, an abolitionist, writer and founder of the African Methodist Episcopal Church.

Allen, a formerly enslaved person who co-founded the Free African Society, a mutual aid society that helped Black families, and the African Methodist Episcopal Church - the first national Black church denomination in the United States - is one of Philadelphia’s most important historical figures. His name replaces that of William Allen, a British Loyalist who owned slaves.

“This is a form of reparations because we are repairing an injustice,” Rabb said. “I am not proud that I did not know who Allens Lane was named after, but as soon as I found out I was upset. But being upset is not nearly enough, is it? We must act.”

Part of that action was amending the Allens Lane street marker sign at the corner of Allens Lane and Cresheim Road to add the words “Richard Allen Lane” to the bottom of the sign. The sign was unveiled at the event, which was held on Richard Allen’s birthday of Feb. 14.

Bass, according to a press release, introduced the resolution to honor Allen after Rabb made the request.

“The legacy is bigger than the man,” Rabb said. “And it transcends the moment.”

Richard Allen also was a founding father of Freemasonry for Black men in Pennsylvania. In 1797, he helped Prince Hall, founder of the first lodge of Black Freemasonry, organize a group in Philadelphia.

Donald C. Dones, most worshipful grand master from the Prince Hall Masons, was also among the city’s many Black leaders who showed up to celebrate the event.

“From then to now, over 200 years we've been in existence,” Dones said. “Thanks to founders like Richard Allen.”

Leslie Richards, ceo and general manager of SEPTA, gave credit for the name change to Bass, who sponsored the resolution, as well as the rest of City Council, which approved the bill.

“It's wonderful to see the naming come full circle, to celebrate someone who has done so much [for] the Black community and for Philadelphia,” she said. “He was a minister, educator and writer - a man of integrity and faith. And he deserves this recognition.”

Richards said that SEPTA will be working with leaders of the First Episcopal District of the A.M.E. Church to create and install historic panels of Richard Allen at the train station.

“Our stations can be so much more than transient places that people wait [at] to take them from one place to another,” she said. “They're a wonderful way to share our values through public art, tell stories and allow people to learn and be inspired with every trip they take.”

Richard Allen purchased his freedom  for $2,000 from his enslaver, Benjamin Chew, the namesake of Chew Avenue. Allen also led a walk-out from St. George’s Episcopal Church with the Rev. Absalom Jones, founder of the nation’s first Black Episcopal Church (the African Episcopal Church of St. Thomas in Overbrook Farms) because St. George’s had relegated Black worshippers to the church’s back pews. Jones, while in prayer, was pulled up from his knees and told that he couldn’t remain in a seat he had chosen.

William Allen, the 26th mayor of Philadelphia, did eventually free his slaves upon his death. His mansion, named Mt. Airy (where the United Lutheran Seminary is now located) is where the current neighborhood got its name. He had a hunting lodge further north, in a spot now known as Allentown, PA.

Correction: An earlier version of this article stated that the African Episcopal Church of St. Thomas was in Wynnefield. It is in fact in Overbrook Farms.