Roxborough students cope with the impact of violence

When Amaiyah Ramsey heard the gunshots after the football scrimmage she attended at Roxborough High School, her first instinct was to run and hide.

Roxborough students cope with the impact of violence 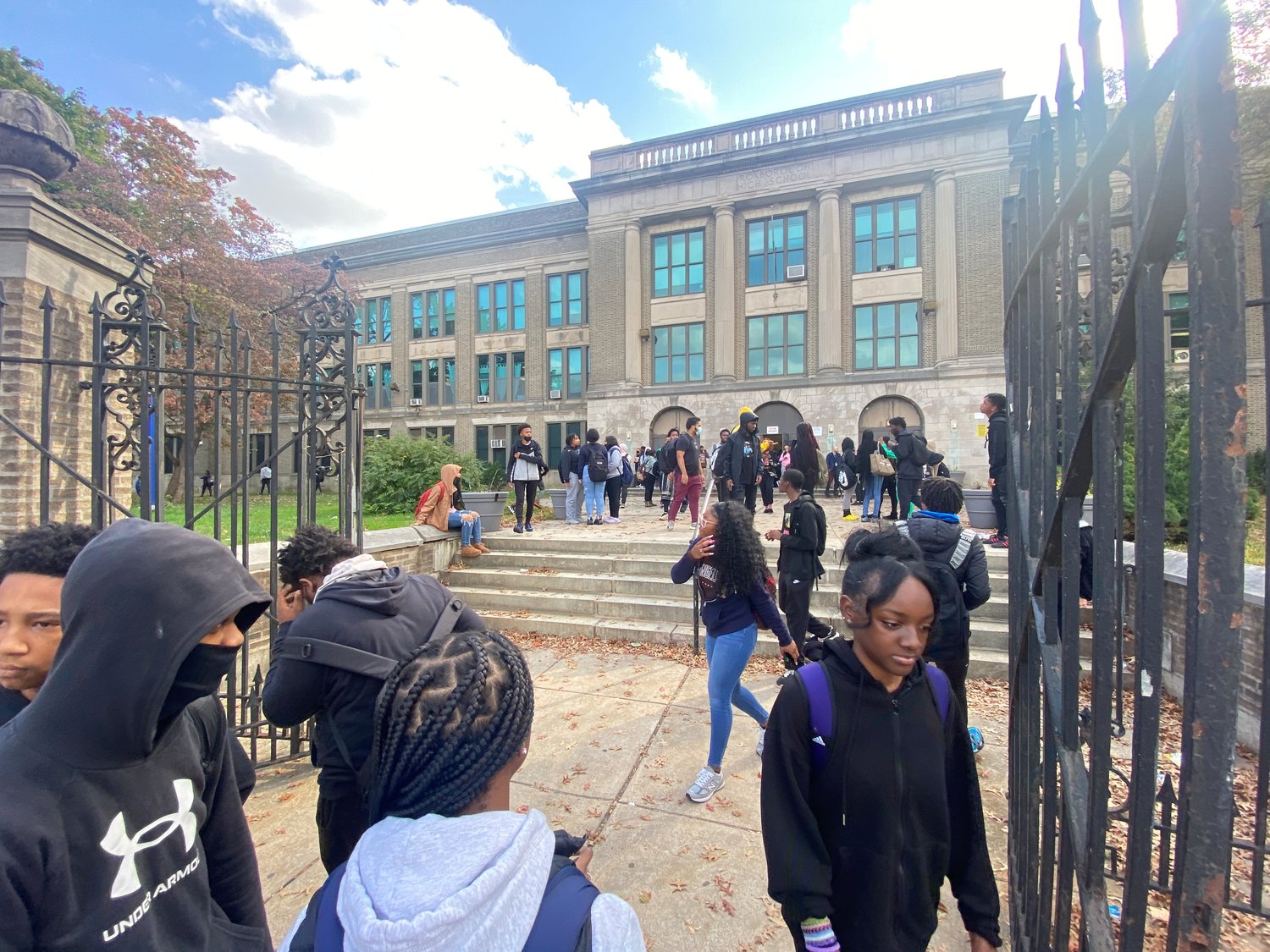 Students at Roxborough High School being dismissed from school on Monday.
Photo by Tom Beck
Posted Thursday, October 20, 2022 12:00 am
by Tom Beck

When Amaiyah Ramsey heard the gunshots after the football scrimmage she attended at Roxborough High School, her first instinct was to run and hide.

“I was standing in the middle of the field talking to someone when the shots rang off,” Ramsey, a junior at the school, told the Local last week. “I ran, but I came back because it got silent for a minute.”

But the silence provided only a false sense of security.

“I came back out of my hiding spot and when the shots went off again I started sprinting,” she said. “I ran, hopped the fence. I just saw the bodies start dropping like flies.”

As Ramsey reached the top of the hill next to the football field, she said, she looked behind her and saw 14-year-old Nicolas Elizalde on the ground, dying, with his mother on top of him. Eventually the police arrived and a teacher told Ramsey to go home. The scene was chaotic.

Bush, who is 15 years old and lives in Nicetown, said he was used to such violence.

“Stuff like that happens in the hood all the time,” he said.

Bush said he didn’t feel the need to see one of the counselors that the school district made available to students who were affected emotionally by the shooting of Elizalde, who was a student at nearby Saul High School. But Ramsey, a Roxborough resident, said she saw three of them.

“It was too much for the first day back in school,” she said. “But as I talked with the counselors and the teachers - it got better gradually. They helped us through the trauma of it all.”

Monique Braxton, a spokesperson for the School District of Philadelphia, told the Local in a statement that the school district's Emergency Crisis Team, which includes social workers and counselors, have been working with students and teachers at Roxborough who were traumatized by the shooting.

“Game times have been adjusted in some cases, and coaches, along with school administrators, are making those decisions with safety concerns in mind,” she added. “The Office of School Safety is working with Philadelphia Police to ensure the safety of our students.”

Roxborough High student Jaylah Holmes also said she was there the night of the shooting, on Sept. 27. Her thoughts about the shooting initially distracted Holmes from her schoolwork, she said, and she cried a lot over it. But with time, she has learned not to let it bother her.

“The game was over and I was talking to my friends on the field and we just heard [gunshots] and everybody was running,” she said. “I saw people running up the hill, then I saw this boy drop and when it was all over and I walked out, I saw the boy's mom crying over top of him. And that's when I started to freak out and panic.”

In an attempt to improve safety conditions, multiple elected officials last Tuesday announced a $500,000 state grant for increased security measures. The money will be used for more security cameras and doors that lock magnetically.

“The reality is we have work to do to make sure that whether it's at a school, or folks are walking down the street, or you're at the grocery store or you're sitting on your step, that you don't get shot in our city,” State Rep. Malcolm Kenyatta said in a press conference last week.

In a statement, School District of Philadelphia Superintendent Tony Watlington said that the district is “heartbroken and angered” by the shooting.

“The ongoing gun violence in our city is absolutely unacceptable,” he said. “We remain firmly committed to working with the Philadelphia Police Department and the City of Philadelphia to see how - together - we can better address the gun violence that is affecting our students and communities throughout the city.”

It’s an issue that has reverberated throughout the school. Amira Covington, a Roxborough High junior, said that she sometimes feels unsafe waiting to be picked up from school by her dad.

“I get really worried, staying outside after a certain amount of time to get picked up, because my dad is running late,” she said. “The staff tells us we can't stay in the building.”

Covington said that some of the older kids talk about carrying guns outside of school, something that worries her.

“Some of our classmates can be dangerous,” she said. “Some people - they carry guns and stuff.”

Roxborough High students must pass through metal detectors to enter the school, a policy that many students, including sophomore Evelyn Kirkendoll, appreciate.

“I think it's a really good idea because anybody could have any kind of weapon that could do damage or wreak havoc in the whole school,” Kirkendoll said. “I think they do a very good job doing that. There could be danger anywhere in the school.”

When asked what the school could do to make her feel more safe, Kirkendoll mentioned security cameras. With the $500,000 grant, she may get her wish.

But there’s one thing the money won’t do.

“It won't do what I know we want to be able to do,” said Kenyatta at the press conference. “To go in a time machine and to not lose Nicolas to senseless violence.”

So far two suspects - 21-year-old Yaaseen Bivins and 17-year-old Zyhied Jones - have been arrested in connection to the shooting. A third, 15-year-old Troy Fletcher, turned himself in to police Monday afternoon. Dayron Burney-Thorn, 16, has also been identified as a suspect by the District Attorney’s office, but remains at large.