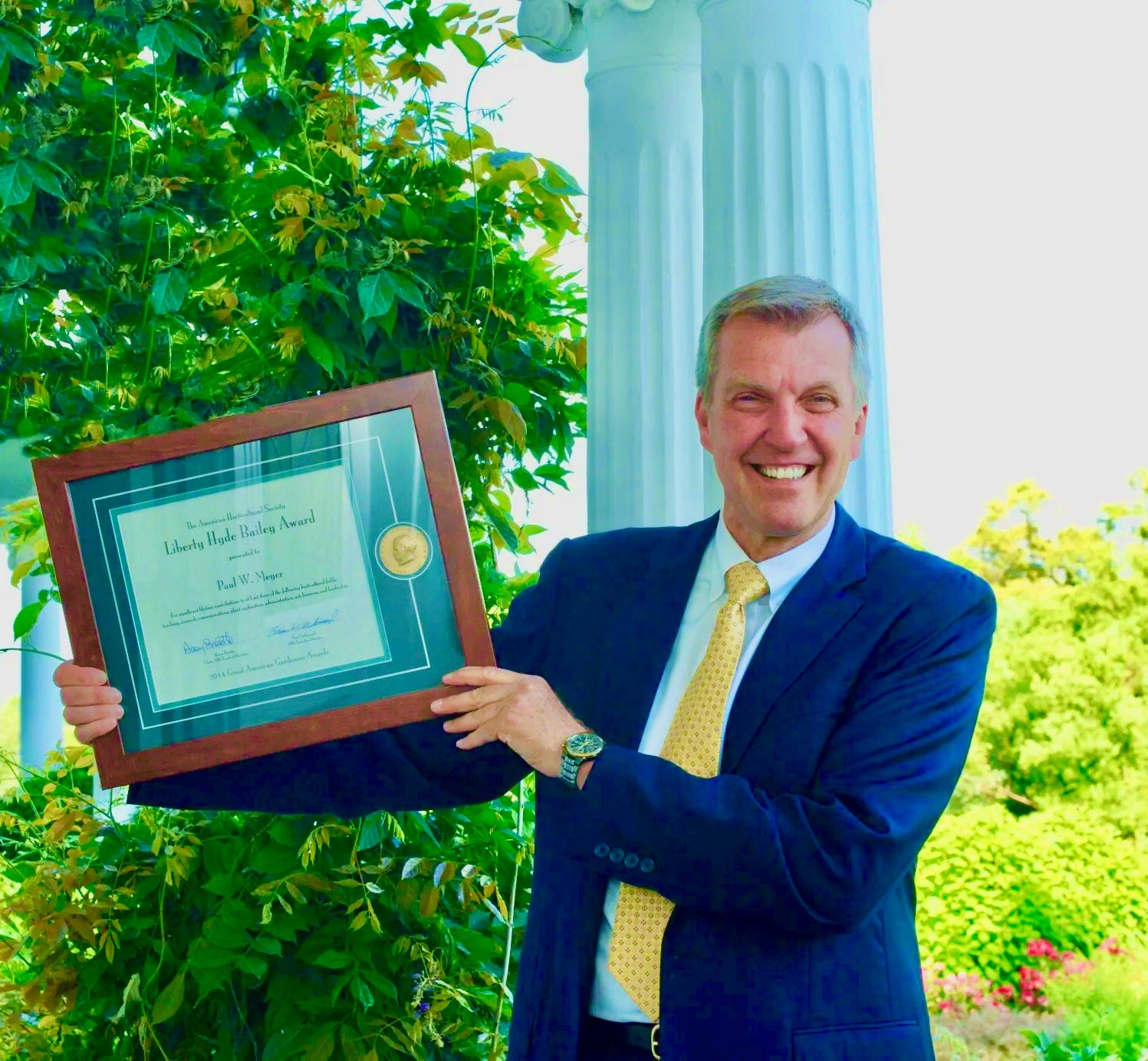 Paul Meyer has won many awards over his long career. His most recent was the Veitch Memorial Medal, an international prize issued annually by the Royal Horticultural Society in Great Britain.
Posted Wednesday, March 30, 2022 12:00 am
by Len Lear

The Veitch Memorial Medal is an international prize issued annually by the Royal Horticultural Society in Great Britain. First issued 152 years ago, the prize is awarded to "persons of any nationality who have made an outstanding contribution to the advancement and improvement of the science and practice of horticulture."

This year, during a recent ceremony in London, one of the recipients was Chestnut Hill resident Paul Meyer, an imposing presence at Morris Arboretum for 43 years until his retirement in 2019.

“When I started, the word 'horticulturist' did not command a lot of respect among the public,” Meyer said in a recent interview. “People would say, 'Oh, that's a gardener; right?' It did not get the same respect as other professions.”

Meyer is a legend in the field of horticulture. As the F. Otto Haas executive director of Morris Arboretum, he played a major role in the Arboretum’s restoration of its historic gardens, architecture and vistas with notable plant collections. He has taught urban horticulture in the University of Pennsylvania’s Landscape Architecture and Regional Planning Department and has been a frequent contributor to horticultural publications. He is also co-author of “Philadelphia Trees: A Field Guide to the City and the Surrounding Delaware Valley,” published in 2017.

In addition to his expertise with trees, Meyer is a leader in the field of plant exploration and evaluation. He has made 12 expeditions to countries including China, Korea, Taiwan, Armenia and the Republic of Georgia, where he has collected plants from various sources to introduce greater genetic diversity of offerings which are now thriving in the mid-Atlantic region. He will be going to Uzbekistan and Tajikistan in April for more exploration.

For many years, if you had seen Meyer walking around the grounds of the popular Morris Arboretum, you would have seen a camera in his hands. His photographic acumen is apparent in the beautiful volume “Morris Arboretum Through the Lens of Paul W. Meyer,” which showcases the arboretum grounds in all four seasons.

“As a kid, we did not have a lot of money, so I had to bring in some money,” Meyer said. “So I cut grass, did gardening, and painted houses. I did not like the painting, but I loved the gardening. It became my passion.”

Meyer particularly remembers his grandparents’ orchard, which grew strawberries, raspberries and grapes. It was close to his house, and a magical place for the six-year-old Meyer.

“I grew my own tomatoes there,” he said. “To this day I am passionate about growing tomatoes.”

Meyer grew up in a Cincinnati suburb. He attended Ohio State University as an engineering major, but when he found out that students could actually major in horticulture, he switched to that. In those days, shortly after the first Earth Day (April 22, 1970), many more college students began choosing horticulture as their major.

After graduation, Meyer earned a summertime position at Hillier’s Gardens and Arboretum in Winchester, England.

“I was looking through books of English gardens and thought, wouldn’t it be nice to go to England,” Meyer said. “Encouraged by my professors, I wrote to Harold Hillier.”

Hillier, a leading horticulturist who was knighted in 1971 for his work in the field, hired Meyer. “I worked for peanuts, about $50 a week,” Meyer said. “After taxes, 7.5 pounds (about $18). I went to experience another culture but also because England is the motherload of gardens. It has a long history of garden design and horticulture."

Meyer completed his time in Europe with a stint at a garden in Hildesheim, Germany, before coming home to enter the University of Delaware’s Longwood Graduate Program at Longwood Gardens in Chester County. During his studies, Meyer met people affiliated with Morris Arboretum, which at the time (mid-1970s) was not visited by many people. Meyer joined the staff in 1976,

Thanks to the efforts of Meyer and others, attendance increased with about 140,000 people visiting the arboretum annually before the pandemic. Attendance continued to climb after the pandemic began.

“It was not the kind of place you would expect to spend a career back then,” Meyer said. “It was considered an entry level place. But after I was hired right out of grad school, a kind of baby curator, they hired a dynamic executive director, Bill Klein.”

Klein held the position from 1977 to 1990, and led an impressive turnaround for what would become one of Chestnut Hill’s most important institutions.

“I was on the search committee to find a new director, and I knew about the major financial problems the arboretum had. They offered the job to someone else, and he turned it down.

“Then the search committee asked me to do it,” Meyer said. “I thought if I didn't take it, I would be at the mercy of someone else.”

Meyer took the job in 1991, and came up with a sound financial plan. Right away, he said, he got hit with what “turned out to be the year from hell.”

“After a few months, we had a tornado-like storm, which destroyed hundreds of trees,” he said. “But then the community really rallied, and donations poured in. It has been improving ever since then.”

For more information, visit morrisarboretum.org. Len Lear can be reached at lenlear@chestnuthilllocal.com

Correction: a previous  version incorrectly stated the number of annual visitors to Morris Arboretum prior to COVID.  The correct number is 140,000, not 14,000.