According to Chuong Le, 37, co-owner (with Hung Nguyên) of Saigon Noodle Bar, the charming Vietnamese foodery in the Market at the Fareway in the back of the Chestnut Hill Hotel. “We did … 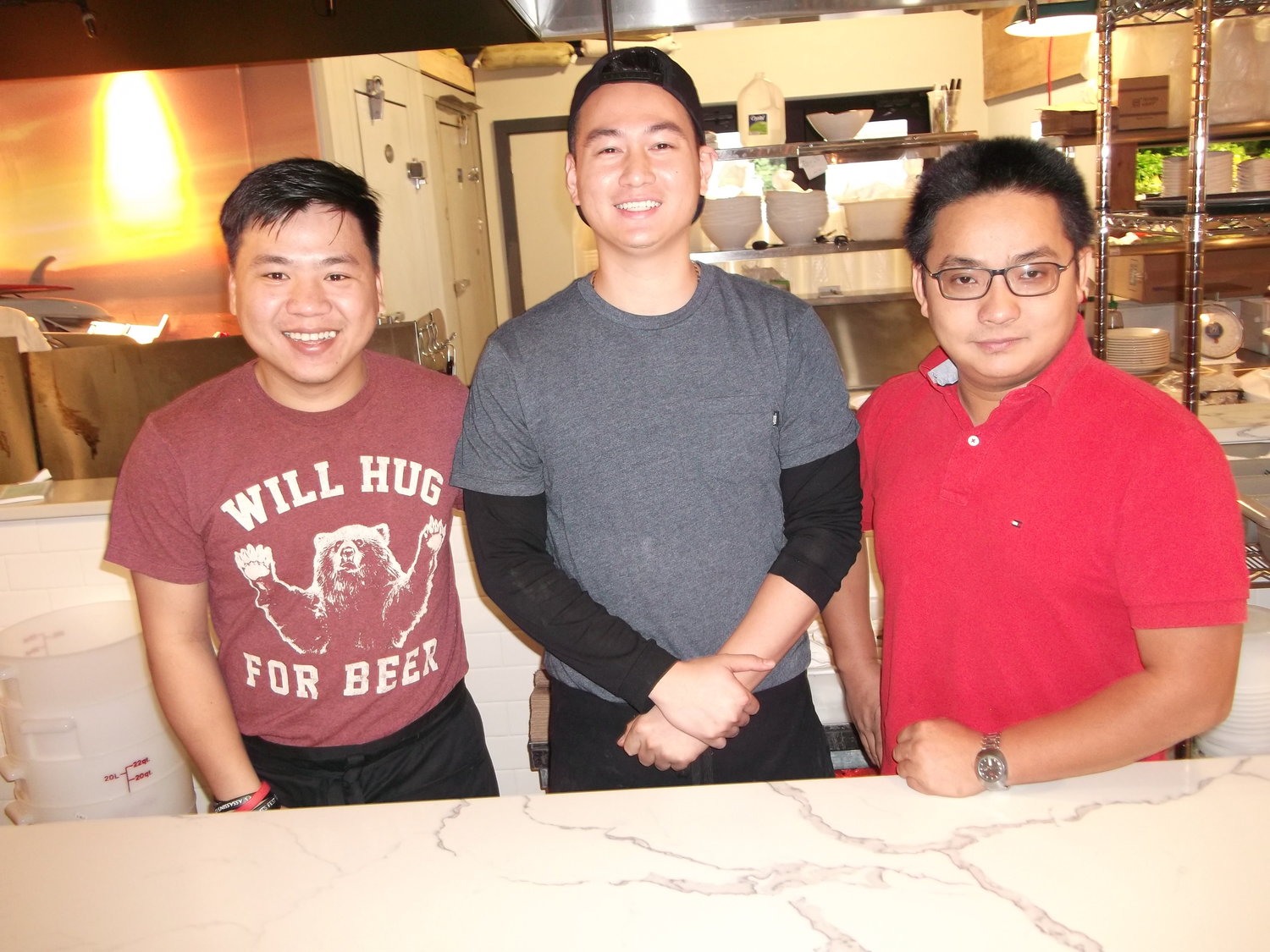 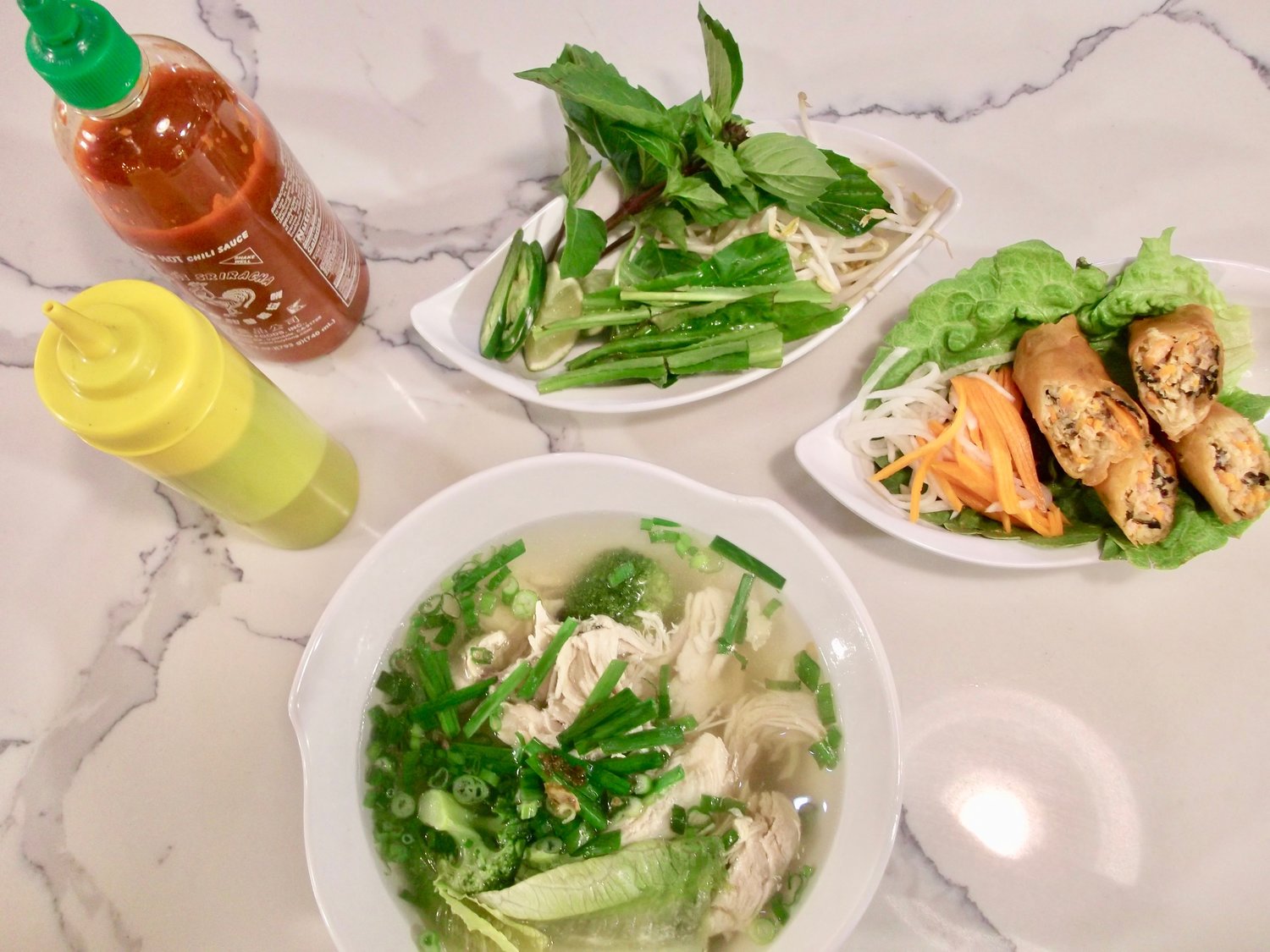 Chicken soup, spring rolls and fresh green vegetables meant to be put into the chicken soup are among the many aesthetically presented, healthy and tasty dishes at Saigon Noodle Bar. (Photo by Len Lear)
Previous Next
Posted Thursday, November 19, 2020 3:23 pm
by Len Lear

According to Chuong Le, 37, co-owner (with Hung Nguyên) of Saigon Noodle Bar, the charming Vietnamese foodery in the Market at the Fareway in the back of the Chestnut Hill Hotel. “We did great before the pandemic. We had 8-10 people working with us, and for a small place, that's great.”
Of course, the pandemic was catastrophic, and I must admit I was surprised to find out they are still in business, even though their food is wonderful, and their service is very friendly.

For example, the first review that comes up in a yelp.com search is five stars from Gary W., who writes: “Got delivery after reading the reviews. Arrived early from Grubhub, and the food held up until delivery. Was a little hesitant to order food during the pandemic. Nuked it in the microwave to be careful. Crispy rolls and shrimp Pho' were delicious. Pho' was almost enough for two. Another great addition to the foodie scene in Chestnut Hill.”

How has the Saigon Noodle Bar been able to survive the effects of the pandemic? “We got help from people in Chestnut Hill,” said Chuong. “From the landlord, who understands us, even though they’re hurt too, to the customers. They supported us by order deliveries and take out. Can’t ask for more than that.

Take out is now 99.99% of the business. Everything is in survival mode now.”

Chuong came to the U.S. from Saigon (Ho Chi Minh City) in Vietnam 16 years ago and earned an associate’s degree from Camden County Community College and then a degree in business administration from Temple University, which took six years because he was also working full-time during the entire six years. (While in Vietnam, Le had gone to college to study industrial engineering.)

But somewhere along the line, he took a detour into the restaurant world and probably figured you can't fight the zeitgeist. Like so many other Asian cuisine pioneers in the Philadelphia area, Le and Hung Nguyen have elevated Vietnamese street food into a whole new galaxy, shimmering with Continental and Chinese sauces and techniques.

In August of 2018, the partners opened Saigon Noodle Bar, which is open Wednesday through Sunday, 11 a.m. to 8 p.m., in the Market at the Fareway, which has undergone a stunning upgrade since it was called the Chestnut Hill Farmers Market, and it’s clear that Vietnamese street food is the owners' true north.


“Their chicken noodle soup is so good,” said Maurice Lavasani, of Shundeez, the long-time Mediterranean foods outlet at the other end of the market. “Everything is fresh. Delicious broth with fresh mint on the side. And Chuong is a very nice guy and very knowledgeable.” (I consider Maurice an expert witness when it comes to food. He could testify in court about food without taking the oath. He formerly owned Shundeez restaurant at the top of the Hill, which earned a rave review from the Inquirer critic, Craig LaBan.)
Chuong Le, who still has one brother in Vietnam but parents who are here and one brother in Canada, sharpened his skills at two Vietnamese restaurants in South Philly over six years as a server and manager. He took English language courses in Vietnam from the sixth grade on. “The college courses help the thinking process,” he said, “but to succeed, you have to take risks.

“Also, my family had a restaurant in Vietnam since 1992. I was washing dishes at first. I did not cook, but I tasted the food and know the food. I always liked talking to customers and hearing their stories. I knew I could never do the 9 to 5 thing. You must have luck to succeed, but you mostly have to work really hard.”

Before walking out on the restaurant high wire, Chuong started a staffing business (employment agency) with his father, Minh Le, in 2013 that is still extant. In 2015 Le took over Dave’s Pizza in Glenolden, Delaware County, next to a Walmart. “The problem is that people see Asians running a pizza place, and it messes with their perception. They do not expect to see Asians running a pizza place, even though the food is the same.”
What is the best advice Chuong ever received? “Go slow and steady. That was from Uncle Ron Pete, my landlord, and I was stupid not listening to it before.”

Chuong also wanted to take this opportunity to “thank my parents and my girlfriend for their support. We made it through this together. And remember, united we stand.”

For more information: 267-269-7228 or chgnomadle@yahoo.com. Len Lear can be reached at lenlear@chestnuthilllocal.com