The Gravers Lane train station, the first building in Chestnut Hill to be placed on the National Register of Historic Places, was in grave danger when the Historical Society took it on. 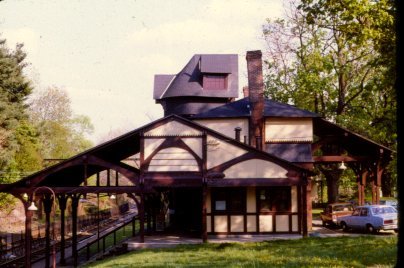 Built in 1883 for the Reading Railroad with Frank Furness as its architect, the aging station had endured serious deterioration when, in 1971, the Chestnut Hill Historical Society began negotiating with the Reading Railroad, then the station’s owner, to undertake necessary renovations.

The first attempts quickly reached an impasse. But the historical society’s intense efforts continued, and by 1979 its tenacity paid off with approval from Amtrak and UMTA (Urban Mass Transportation Administration) for “restoration rights.”  That approval facilitated an agreement with SEPTA, owner of the station in 1979.

Under the leadership of the historical society’s president, Susan Detweiler, the organization won a $30,000 allocation of National Park Service Preservation Grant-in-Aid funds. To match the grant the historical society attracted some 300 donors who contributed $20,000 by July 15, 1981,  $10,000 shy of the $30,000 required.

To help to wrap up the campaign, Hyman Myers, Frank Furness specialist and consultant for the Gravers Lane Station restoration, contributed his persuasive energy.

“Preservation of our station clearly makes sense from an economical and energy conservation standpoint,” he said. “More importantly, the preservation of this building ties us to our past, to our architectural and social heritage.”

“It will provide us and our children some of the delight and fanciful inspiration that we no longer seem to afford in contemporary buildings,” Myers said. Inspired fundraising continued until the organization reached the full amount.

Nancy Hubby and I led the fund-raising campaign and also monitored the restoration work daily. The project encompassed reconstructing the porch, painting the station in its original colors, and repointing the structure. In addition, we were able to undertake chimney repairs.

Happily, we checked out the exacting work of Bill Cornell and his team from J. S. Cornell & Sons, the contractor. The Cornell firm stood out as the “lowest responsible bidder,” a stipulation of the grant. Raymond Lynch was the project architect.

Al Jerdan, son of a Reading Railroad employee who had been the previous tenant of the station, lived at the station with his wife and 4 children. They coped with the condition of only one closet for the family of six.  Perhaps, the Jerdans could be described as the station’s true saviors. When a fire broke out in the station’s restroom, they were at home to quickly call the fire department.

In his recent book “Frank Furness: Architecture in the Age of the Great Machines,” historian George Thomas notes the pace at which Furness produced stations for the Reading Railroad. He wrote that “125 stations in five years, while also continuing his general practice, made Furness a master of both the bold gesture and the purpose-driven rational plan.”

Furness’s “rational plan” was to identify the stations with the Reading Railroad. The architect designed each new building from “a focused palette of color and materials.”

And his “bold gesture?”

“It was often hard for the passenger lost in a newspaper to be certain which station was which,” Thomas wrote. “Furness’s strategy was to give each building a specific identity that functioned as a sign, enabling passengers to tell at a glance where they were on their routes.”

Shirley Hanson is a founder of the Chestnut Hill Conservancy and currently chairs its preservation committee.