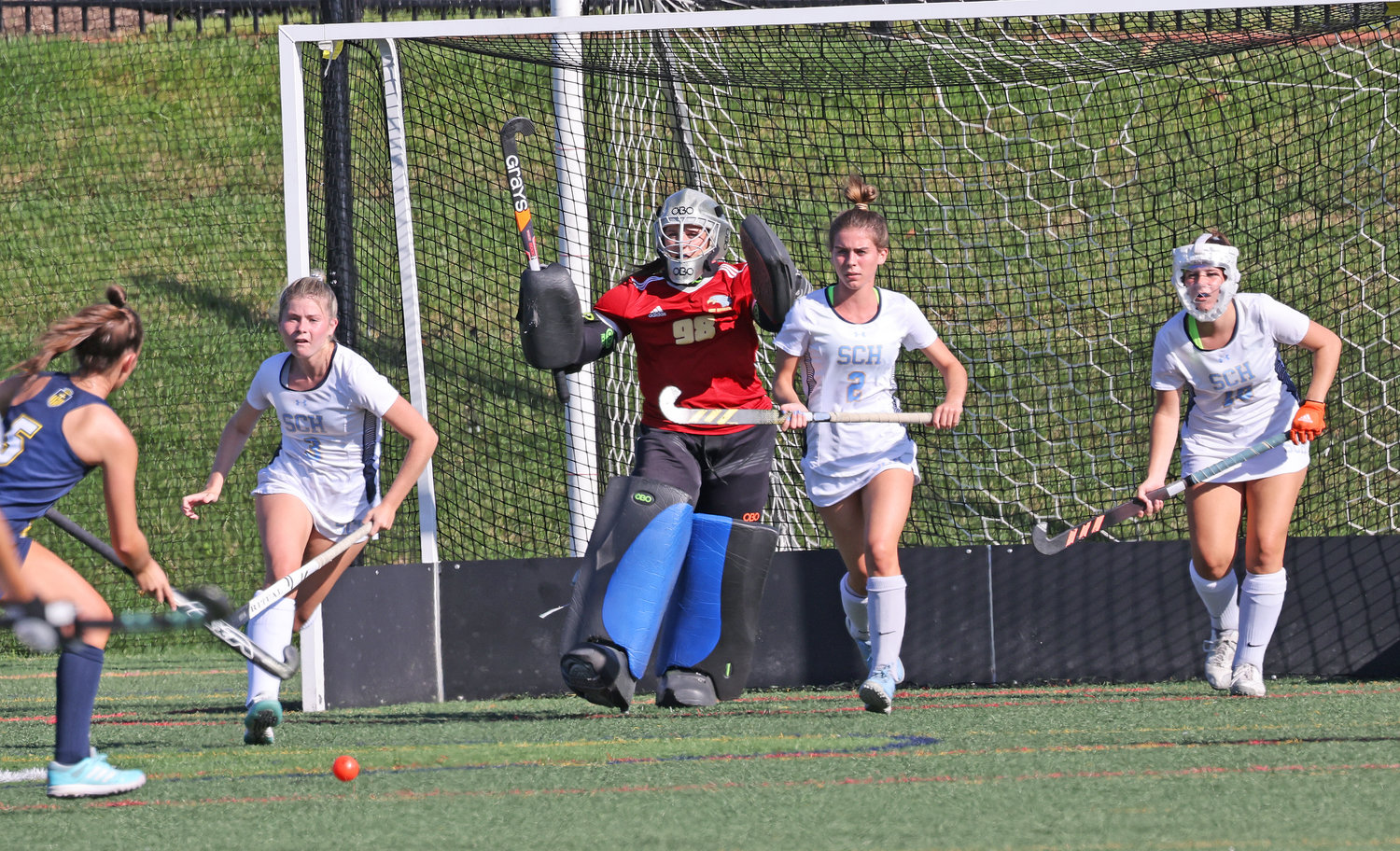 Blue Devils goalie Colleen Conlan urges on her teammates (from left) Caitlyn Melinson, Kerry O'Donnell, and Devyn Conlan as they charge out to counter a Merion Mercy penalty corner.
Photo by Tom Utescher 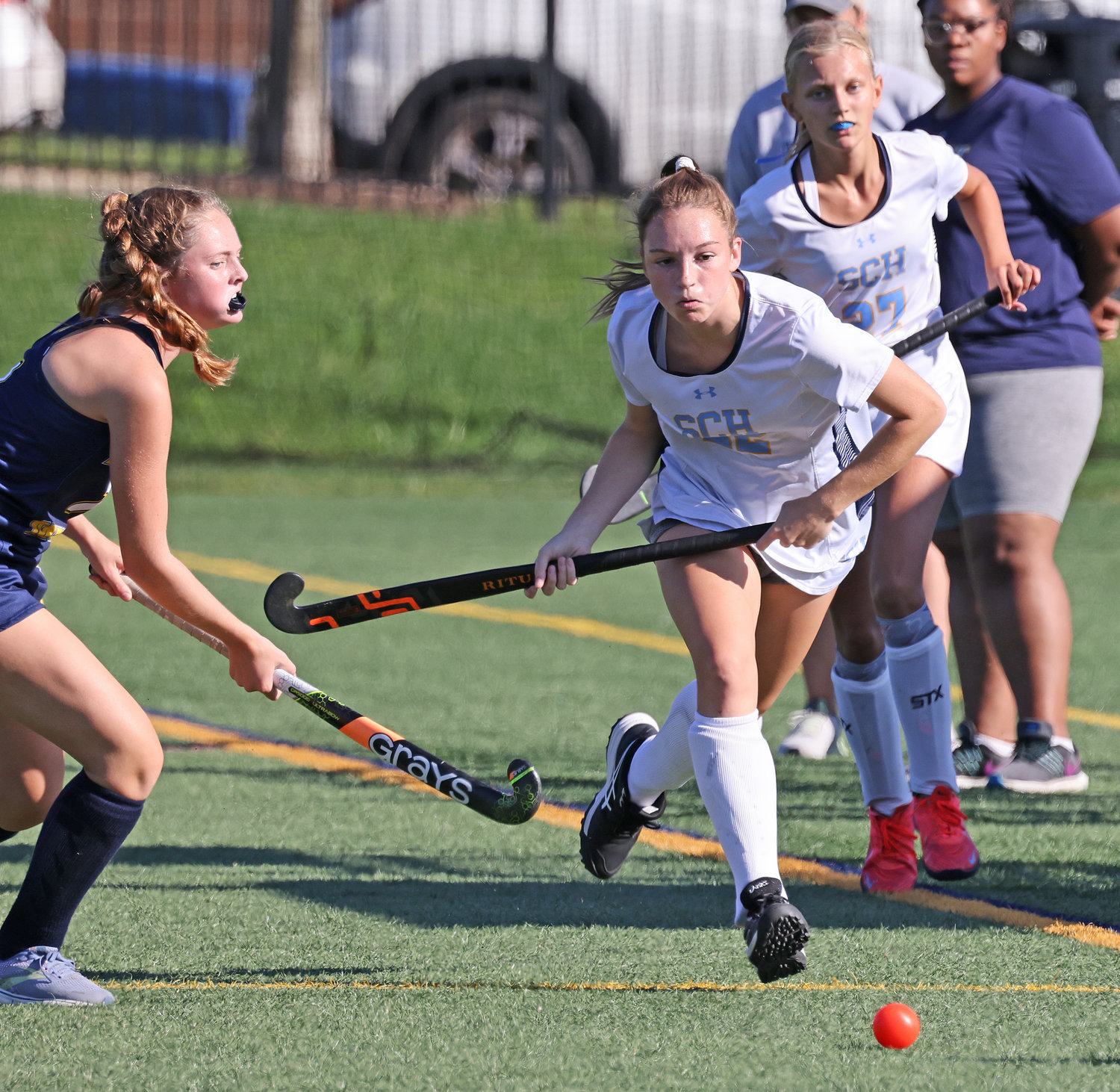 SCH freshman Neeve Doherty escorts the ball along the sideline. Behind her (right) is her classmate Nadia Gross.
Photo by Tom Utescher
Previous Next
Posted Wednesday, September 21, 2022 12:00 am
by Tom Utescher

Merion was ranked 20th in the Max Field Hockey preseason Pennsylvania poll, and the Golden Bears also have a player headed to a top 20 college team, Old Dominion University.

Two goals by SCH sophomore Devyn Conlan, the second on a penalty stroke, gave the Blue Devils a 2-0 lead before the visitors scored their lone goal of the afternoon to produce a 2-1 final verdict in the Devils' favor.

Like Merion, Springside has players bound for Division I competition. Earlier this month, 11th-grade twins Kerry and Riley O'Donnell made verbal commitments to play for Penn State, where their older sister Brianna played. SCH head coach Emilee Ehret is another former player for the Nittany Lions, who were ranked sixth in a recent national poll.

In a home game two days before the Merion encounter, the Blue Devils knocked off Lawrenceville School, 5-2. Conlan also scored twice in this contest, and the other goals against the Lady Larries came from Riley O'Donnell and sophomores Veronica Goettner and Kira Vakil.

On Thursday, the Blue Devils forced Merion Mercy to play catch-up for almost the entire game after Conlan scored just over three minutes into the contest off of a pass from Riley O'Donnell.

Merion would generate a good deal of offensive activity during the bout, but the visitors only put one shot past Blue Devils goalie Colleen Conlan (Devyn's twin), who would earn the win with nine saves.

The hosts led 1-0 until late in the third quarter, when they were awarded a penalty stroke. With 20 seconds remaining in the period, Devyn Conlan placed her shot low on the left for what would prove to be the winning goal. In the fourth frame, Merion made it 2-1 with 8:57 left to play, with Kerry McCormack tipping in the rebound of a teammate's shot.

The Golden Bears pressed for the equalizer, but couldn't secure it. For the last few minutes SCH ran the ball around to keep it away from the visitors, with Kerry O'Donnell having the ball on her stick much of the time.

UPDATE: SCH went on the road Saturday and collected a 6-0 victory at Westtown School to attain a 4-0 record. Kerry O'Donnell and Vakil each scored twice, and Riley O'Donnell and Devyn Conlan rounded out the final tally. Colleen Conlan chalked up five saves in goal.