Tie games usually aren't satisfying for either of the parties involved, but for the Springside Chestnut Hill girls' soccer team, last Tuesday's 1-1 outcome was a victory of sorts. 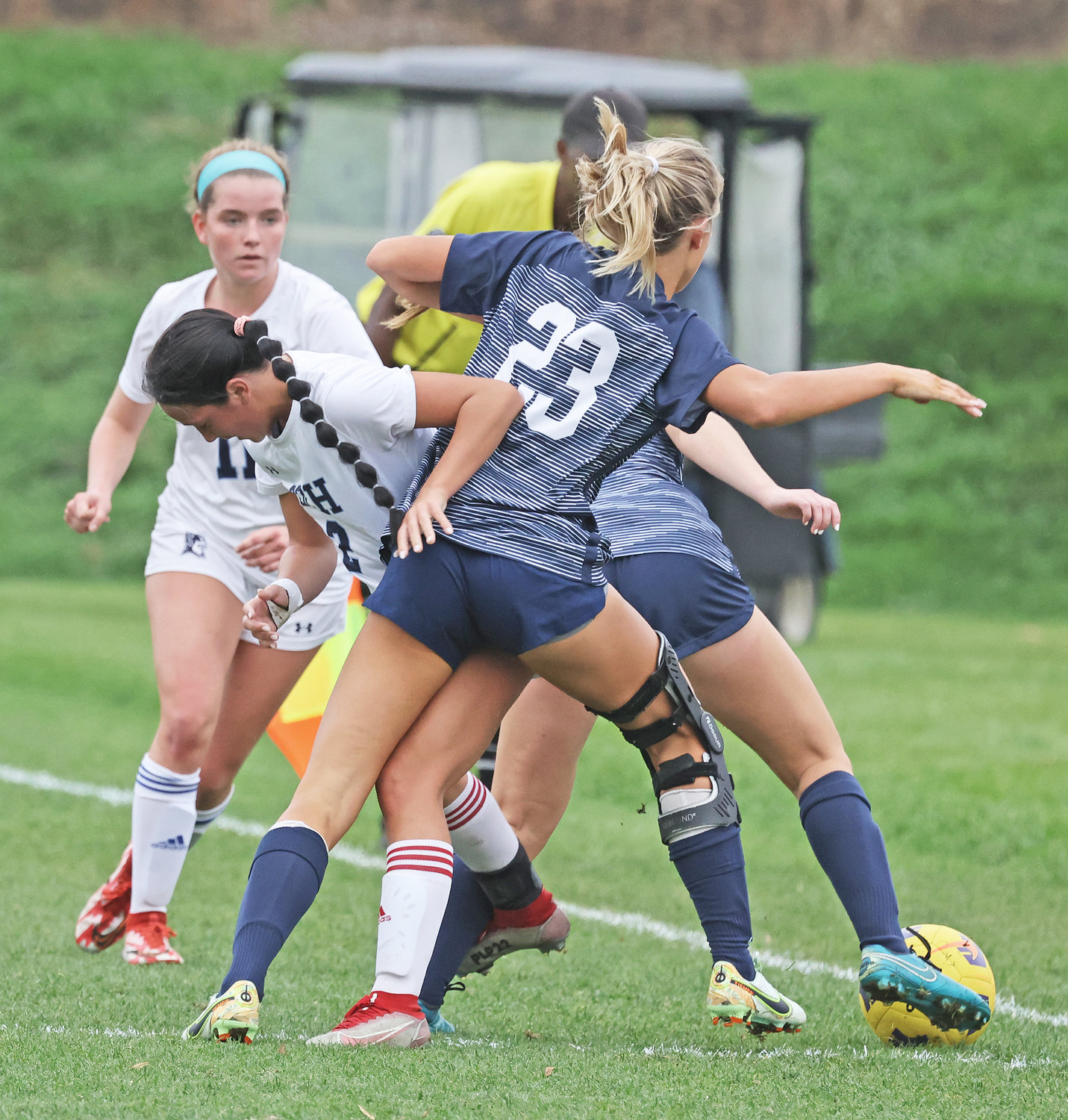 In a scrum along the sideline, SCH senior Lisa McIntyre (left) gets tangled up with Episcopal's Caitlin McCarthy. In the background at left is Blue Devils senior Julia Thomson.
Photo by Tom Utescher 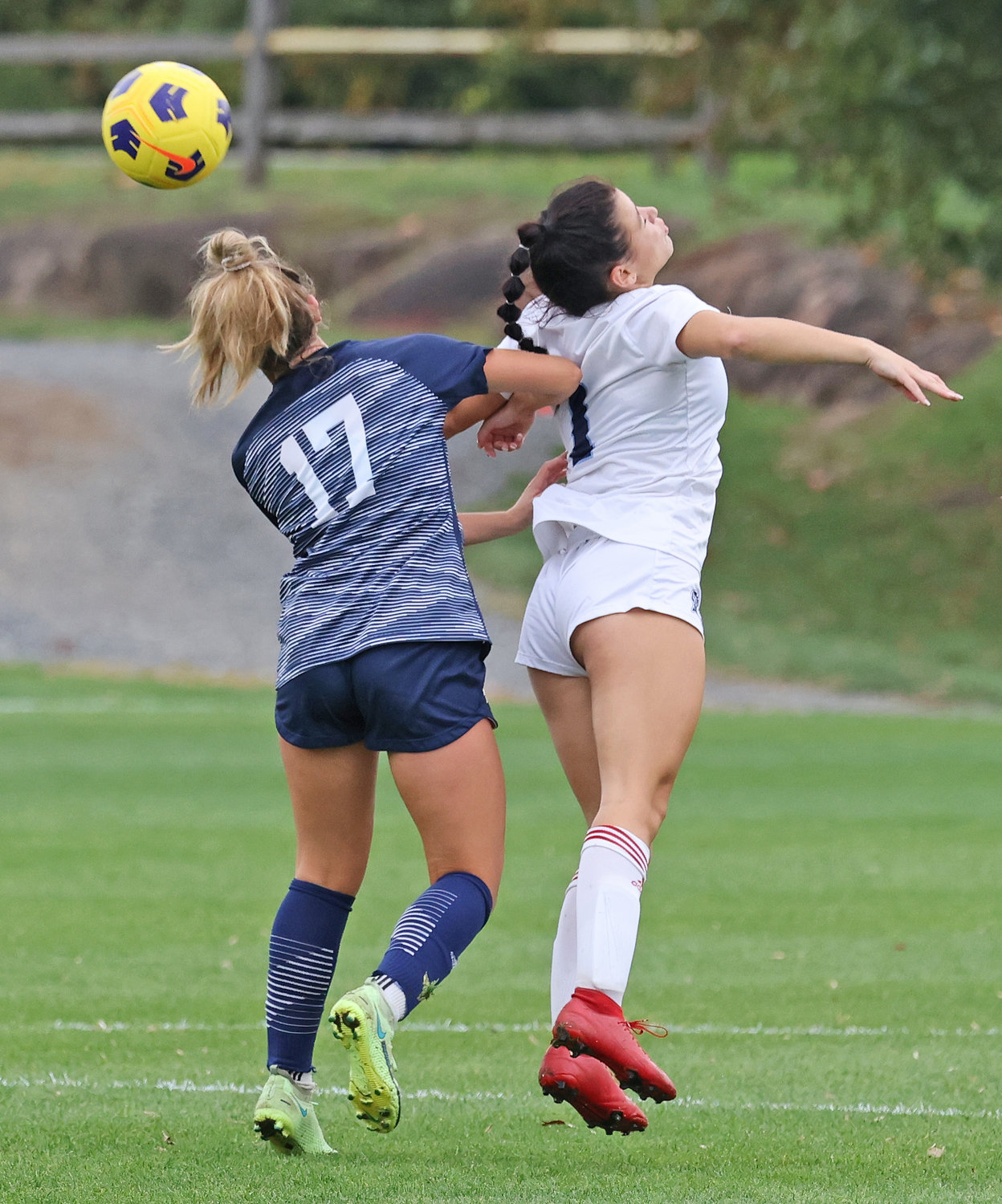 Neither Episcopal's Lainey McGonagle (left) nor fellow junior Abby Udowenko of Springside Chestnut Hill could get a head on this airborne ball.
Photo by Tom Utescher
Previous Next
Posted Wednesday, November 2, 2022 12:00 am
by Tom Utescher

Tie games usually aren't satisfying for either of the parties involved, but for the Springside Chestnut Hill girls' soccer team, last Tuesday's 1-1 outcome at Episcopal Academy was a victory of sorts.

Back on September 29, SCH senior Lisa McIntyre scored in overtime for a 1-0 victory in the Blue Devils' first encounter with Episcopal. However, while the Churchwomen continued to win their other league outings, SCH fell into a tie with Agnes Irwin while McIntyre was out with an injury.

In the Inter-Ac League standings, three points are awarded for each win, and one for a tie. With the Irwin tie, SCH had lost two points off of its highest possible point total, and with the earlier loss to SCH, Episcopal had given up three.

If Episcopal (7-1-1 after Tuesday's game) had won the rematch with SCH and then prevailed in its three remaining league games after that, it would've had 33 total points. A loss for SCH (8-0-2), with two Inter-Ac games to follow, would've meant the Blue Devils could max out at just 31. Tuesday's tie meant that if both teams won the rest of the way, Springside Chestnut Hill would retain the league title with 32 points and the Churchwomen could only reach 31.

On the SCH agenda was a rematch with Baldwin School and then the Inter-Ac finale at home on November 3, against the Academy of Notre Dame. After facing SCH last week, Episcopal had Penn Charter, Notre Dame, and Agnes Irwin left to play.

The action ranged back-and-forth through the midfield right from the start of the last Tuesday's game. Episcopal's first shot strayed wide to the left, and at the other end SCH senior Bella Brown sent in a nice cross from the left side, but the Blue Devils had no one in position to take a shot.

As the minutes went by, the visitors displayed deft ball control, but continued to lack off-the-ball runs into the box that could've resulted in viable shots. On an EA rush, sophomore Kate Dente drove the ball hard on the ground toward the left side of the cage and senior goalie Ellie Stratz made the stop for Springside.

Later, a long throw-in by SCH senior Julia Thomson set up a shot for junior Abby Udowenko, but her ball went straight to the keeper instead of to open space. It was a routine save for Episcopal's senior goalie, Maya Naimoli, who will go on to play for Ohio State. In the middle of the half EA got a long direct kick from the left and hit it beyond the right post of the visitors' goal.

Early in the second 20 minutes of the contest, an Episcopal through ball was chased by Dente, but SCH's Stratz came out to collect it before the EA sophomore got there. The Blue Devils came back up the field and McIntyre got off a shot that was saved by Naimoli.

A few minutes later Episcopal sophomore Quinn Whittaker led an assault, and there were a few anxious moments for the visitors when Stratz had the ball in her hands near the left post but then lost her grip momentarily. The Devils cleared the ball away from the front of the cage before the hosts could punch it in.

SCH had a good opportunity with eight minutes left in the half, when Brown made a run up the middle while McIntyre was bringing the ball along the right wing. McIntyre crossed the ball into the box and Brown reached it, but her shot rose a few feet over the crossbar.

The Devils got off a shot with 90 seconds left, but the slow-paced ball presented no challenge to Naimoli. On one last try before the intermission, McIntyre crossed the ball from the left while Udowenko came in from the weak side, but an EA defender intervened and booted the ball out of the box.

The second half began with a pair of zeroes still on the scoreboard. As usual, Springside Chestnut Hill changed goalies, sending in sophomore Gracyn Lee-Torchiana to replace Stratz. In the opening minute Episcopal earned a long direct kick, out near midfield a little left of center.

EA sophomore Addie Chang was advised to put her kick on-goal, immediately testing the new keeper. The ball arced in high on the left side and Lee-Torchiana got her hands on it, but not solidly enough to prevent it from continuing into the top left corner of the cage.

The Blue Devil goalie was off the hook just a few minutes later. Springside attacked and McIntyre fired a shot over the Churchwomen's goal, and after the goal kick the Devils quickly regained possession and McIntyre came along the left wing. When she shot the ball toward the cage, it was knocked down by junior teammate Brynn Donohue, and then Thomson closed in to jab the ball home.

It was 1-1 with 37:32 remaining in the second half, and the score wouldn't change again.

Episcopal served a ball into the visitors' box but had it cleared, and down the pitch an SCH direct kick went high. On a corner, the Devils opted for a short-pass play on the ground, but didn't get off a shot. Reattacking, they had Donohue head the ball into the EA goal, but she was offsides on the play. A well-struck outside shot by junior Natalie Magnotta of the Churchwomen was swatted outside the left end of the cage by Lee-Torchiana.

With two minutes left in regulation, Blue Devils senior senior Abby Fitzmaurice sent the ball into the box on a long free kick from the left, but in front of the goal an SCH volley was well off the mark. Farther down the field on the left side, McIntyre unleashed a shot that hit the EA crossbar, but SCH had little chance of following up on the rebound since the weak side of the field was deserted.

In the first of the two five-minute overtime periods (played in full with no golden goal) Episcopal attacked early and SCH countered later on. In the final seconds a long serve toward the goal by the Blue Devils did not produce a shot.

With under two minutes left in the second session, a long free kick by Episcopal junior Lainey McGonagle tracked wide to the right side. Springside earned a corner kick in the last moments, and on the serve inside the ball was caught in the air by Naimoli.

If there were no upsets at the tail end of the SCH schedule, the Devils would repeat as league champions. In the first round of Inter-Ac games, they knocked off Baldwin, 6-0, but they only got by Notre Dame and its excellent goalie by a 1-0 score.