It's often the case that a burst of offense in a single inning can decide the outcome of a softball game. 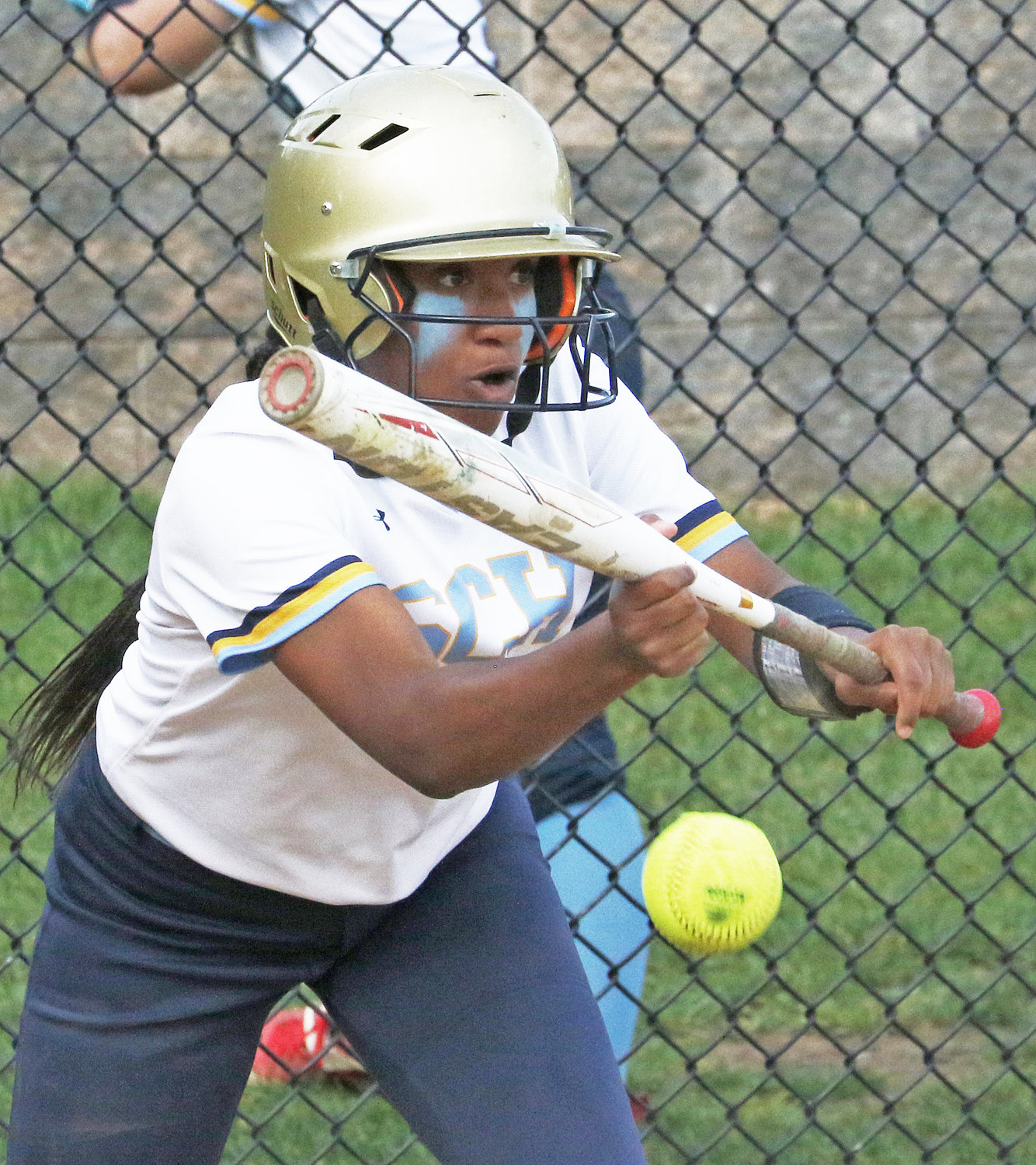 Junior Courtney Oliver lays down a bunt for the Blue Devils.  Photo by Tom Utescher 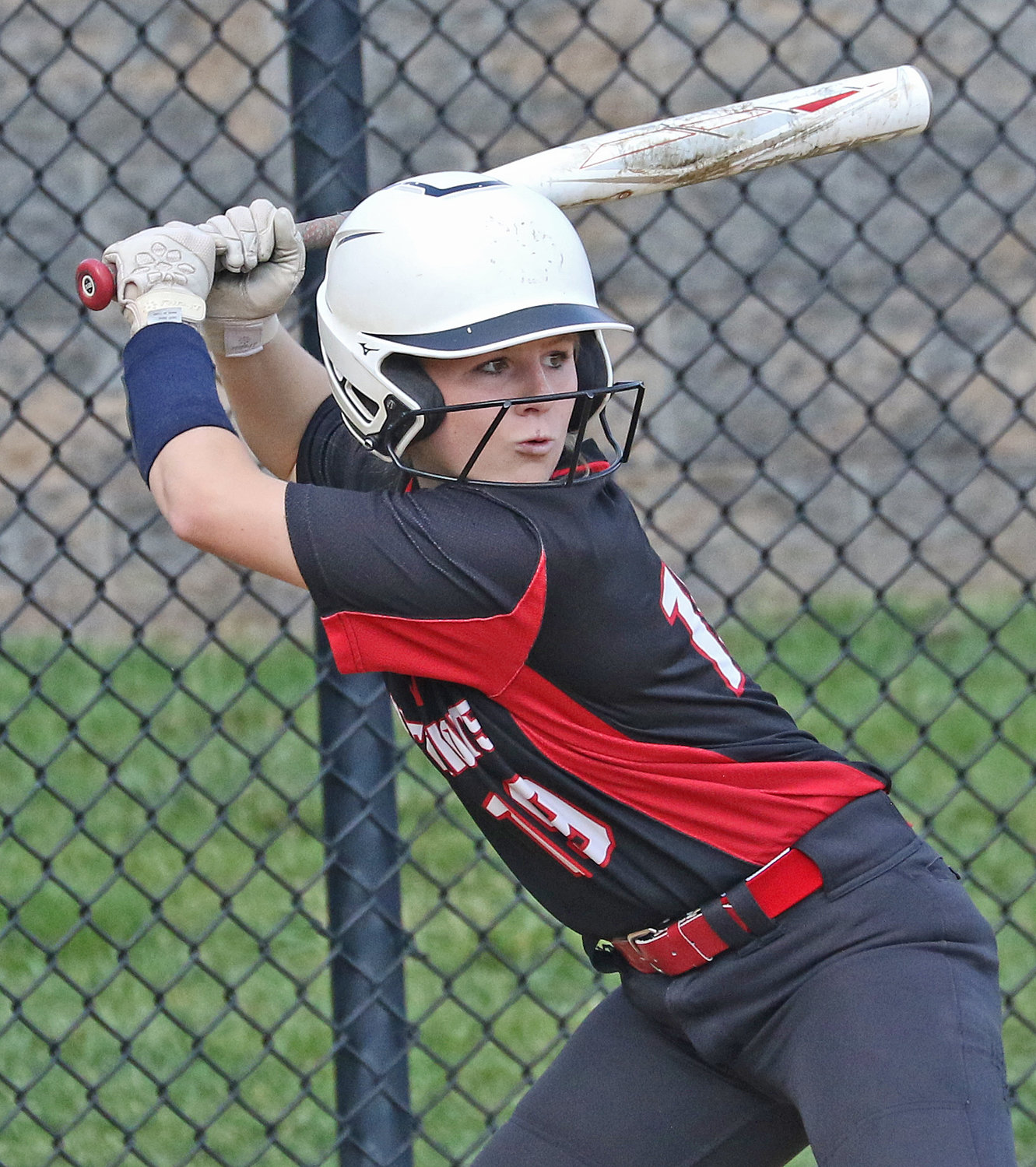 Patriots freshman Liv Reynolds is ready to pounce on a pitch.  Photo by Tom Utescher
Previous Next
Posted Saturday, May 7, 2022 3:52 pm
by Tom Utescher

It's often the case that a burst of offense in a single inning can decide the outcome of a softball game. Last Thursday at Springside Chestnut Hill Academy, the host Blue Devils scored twice in the third inning, and their modest 2-0 lead over visiting Germantown Academy stayed on the board through the first half of the fifth frame.

In the bottom of that inning, SCH came up with three hits and also waited out six walks, and the resulting eight additional runs ended the contest via the mercy rule as soon as the tally reached 10-0.

Duplicating the final score of the teams' first meeting in early April, the Blue Devils improved to 8-1 within the Inter-Ac League. Their lone loss came against the one team ahead of them in the standings, Episcopal Academy. The Churchwomen (8-0) are coming to Chestnut Hill this Tuesday for the rematch.

GA (4-4) had opened the week with a 7-2 victory over Baldwin School. The previous week, the Patriots posted a 7-5 victory over Penn Charter; no one seemed to know for sure the last time that had happened.

That same week, SCH had completed a season sweep of the PC Quakers, and last Wednesday the Blue Devils stormed past Agnes Irwin, 15-0.

The next day, GA freshman Alexandra Johnson started the contest at Springside Chestnut Hill by beating out a throw to first for an infield hit. She stole around to third base as the next two batters struck out, then she was left hanging as a third strike-out was recorded by SCH senior Sam Klug (11K, 1BB).

In the bottom half, GA junior pitcher Clarissa Smith (6K, 9BB) struck out the first three Blue Devils in the order.

In the second, base hits by Klug and her catcher, senior Marissa Wolff, were sandwiched around a strike-out. Freshman McKayla McKeever walked to load the bases, but a strike-out and a pop-up ended the scoring threat.

GA's Johnson got on base once more in the top of the third, drawing a walk, but she was never able to move beyond first base. With one out in the home half of the inning, SCH junior Emma Blaszczak got on base through an infield error, stole second, then reached third on a ground-out by junior Faith Scally.

Klug then slapped an RBI single up the middle, and the pinch runner for her (junior Samaya Goodwin) went to second when sophomore Kamaha'o Bode walked on. Wolff singled to right field to drive home a second run, then a pop-up ended the inning.

Junior Kayleigh Howard singled for GA at the start of round four, and she found herself on second base as the next two batters struck-out and grounded out. On junior Malia Walton's hard-hit bouncing ball to the left side, freshman third baseman Layla Shands was able to knock the ball down and keep it in front of her, holding Howard at second. Klug then wrapped things up with a strike-out.

A walk to Blue Devils junior Courtney Oliver came with two outs in the bottom of the fourth, but a ground-out left her on base.

To start the fifth inning, GA put junior Abby Marino in to hit, and she made contact for a grounder and reached first when SCH could not field the ball cleanly. However, when she tried to steal second, she was tagged out thanks to a nice throw by the Blue Devils' Wolff from behind the plate. A ground-out to Scally at short and a strike-out retired the visiting side.

Scally was first up for the Devils in the bottom of the fifth, biding her time to earn a walk. She went to third when a line-drive by Klug skipped off the lip of a Patriot glove for two bases. Walks to Bode and Wolff then pushed home the Devils' first run of the inning, leaving the bases loaded. A force-out at second off a ball hit by McKeever let in another run, then Shands drew a walk to fill all the bases once more.

Freshman Ava Figueroa hit the ball to centerfield and ended up on second base as the Patriots went for an out at the plate. It was safe all-around, though, as two runs scored and Shands reached third base.

It was back to the top of the SCH order, and Oliver punched the ball through the right side of the infield and wound up on second. One run scored to make it 7-0, and Figueroa got to third. Blaszczak's pop behind short was dropped and an eighth run came home, then Scally walked for a second time in the inning, loading the bases yet again.

When Klug walked and a ninth run scored, GA made a change in the pitching circle, putting in senior Angelina Sannicandro. The first batter, Bode, hit a sort of soft line drive to the first baseman for the second out of the inning. However, when Wolff drew a walk, SCH achieved the 10-run lead needed to immediately bring the game to an end in the fifth inning.