Her students for 14 years at Springside Chestnut Hill Academy have known that Mary Ann was creative, thoughtful and fun, and now readers of her new novel will know it, too. by Len Lear Mary Ann … 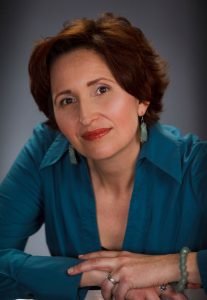 Her students for 14 years at Springside Chestnut Hill Academy have known that Mary Ann was creative, thoughtful and fun, and now readers of her new novel will know it, too.

Mary Ann Domanska, 43,is known as a superb second grade teacher at Springside Chestnut Hill Academy (SCH), but from now on she will also be known as a novelist since her debut novel, “Emic Rizzle, Tinkerer,” will be unveiled at a “meet the author” book signing event on Sunday, Dec. 4, 2 p.m., at Blue Marble Bookstore, 551 Carpenter Lane in West Mt. Airy.

“The character of Emic Rizzle (a girl) was inspired by a drawing my daughter, Clara, made years ago when she was nine years old (she is now 16),” Domanska told us last week. “We had fun making up new names and creative stories.

“For about two years, this image was stuck in my mind, and I would occasionally think of character traits or adventures for Emic to experience. When I finally was brave enough to begin writing, I could not stop until the first draft of the manuscript was complete. That only took about a month.

“The editing and revising process, however, took about five years! I took a wonderful graduate level class at Arcadia University with Gretchen Haertsch, a great teacher, called ‘The Intermediate Young Adult and Children’s Writing.’”

Domanska, who is currently in her 14th year at SCH, was born in Miami, FL but was raised in the foothills of North Carolina. She graduated in 1994 from Emerson College in Boston with a BFA in Performing Arts and a minor in Creative Writing and then in 2003 from Chestnut Hill College with a Masters in Elementary Education.

Prior to SCH she was, among other jobs, an assistant at Germantown Friends School for three years, Interim Director for the “Girl Scouting Behind Bars” program for the former Freedom Valley Girl Scout Council in Valley Forge, a mortgage broker in NC and a script reader for MGM Studios in Santa Monica, CA.

Mary Ann’s new book, a “middle grade adventure,” is being published by an independent press, Mnemosyne Books, an imprint of Lethe Press.

Why does the author refer to her heroine as a “Tinkerer?”

“The idea of tinkering,” she replied, “and how important it is for children to explore materials and learn about how things work by really building and launching and breaking and experimenting. I ran a camp last summer at SCH called ‘Make It Happen.’ It was so much fun!

“I imagined that my character, Emic, would have loved a camp like that. (Heck, I would have love a camp like that when I was a kid.) I also ran an after-school tinkering class for younger kids this fall that let them explore lots of kinds of materials and reactions. ‘Tinkering’ increases curiosity and risk-taking and should be in every classroom.”

Domanska’s work of fiction is already attracting favorable attention. For example, it received an unalloyed rave from Kirkus Review, which said in part: “Domanska gives readers a delightful heroine in Emic. She’s warmhearted, loyal, smart and clever and determined to be herself. She also dresses in a trademark mix of contrasting colors and patterns, mixed with vintage pieces, such as her grandfather’s Distinguished Service Cross.

“Domanska also provides nice details about Emic’s family situation and illustrates her tinkering well (drat that melted plastic capacitor!). Although spy-thriller plots in Young Adult fiction usually beggar belief, this one is handled fairly realistically … Let’s hope for more from Domanska, as Emic the inventor is a very appealing invention herself.”

What was the hardest thing Mary Ann ever had to do? “Skip a trip to Paris while I was in high school. I got a big part in our high school musical (Audrey in ‘Little Shop of Horrors’). The director told me if I missed the three rehearsals to go on this trip with my French class, she’d give the part to someone else. France, I knew, would still be there. The decision was left up to me. I don’t regret my choice, but I wish I could have gone on that trip with my classmates, too.”

What is the best advice Mary Ann ever received? “The late Dr. Georgia McWhinney of Chestnut Hill College reminded me how much I loved the writing process, and she encouraged me to pursue writing. I recently came across an old email from her that I somehow missed, and in it she said, ‘Know that I am a fan of yours.’ That means so much to me, to have a teacher believe in you. I hope I have an impact like that on some of my students.”

When she is not writing, teaching and parenting (with husband, Andrew), Mary Ann enjoys, among other things, performing in local theater productions, quilting, painting, scrapbooking, making jewelry, riding her red Stella scooter and traveling (when possible).

For more information about the Dec. 4 book reading and signing, call 215-844-1870 or visit www.bigbluemarblebooks.com.