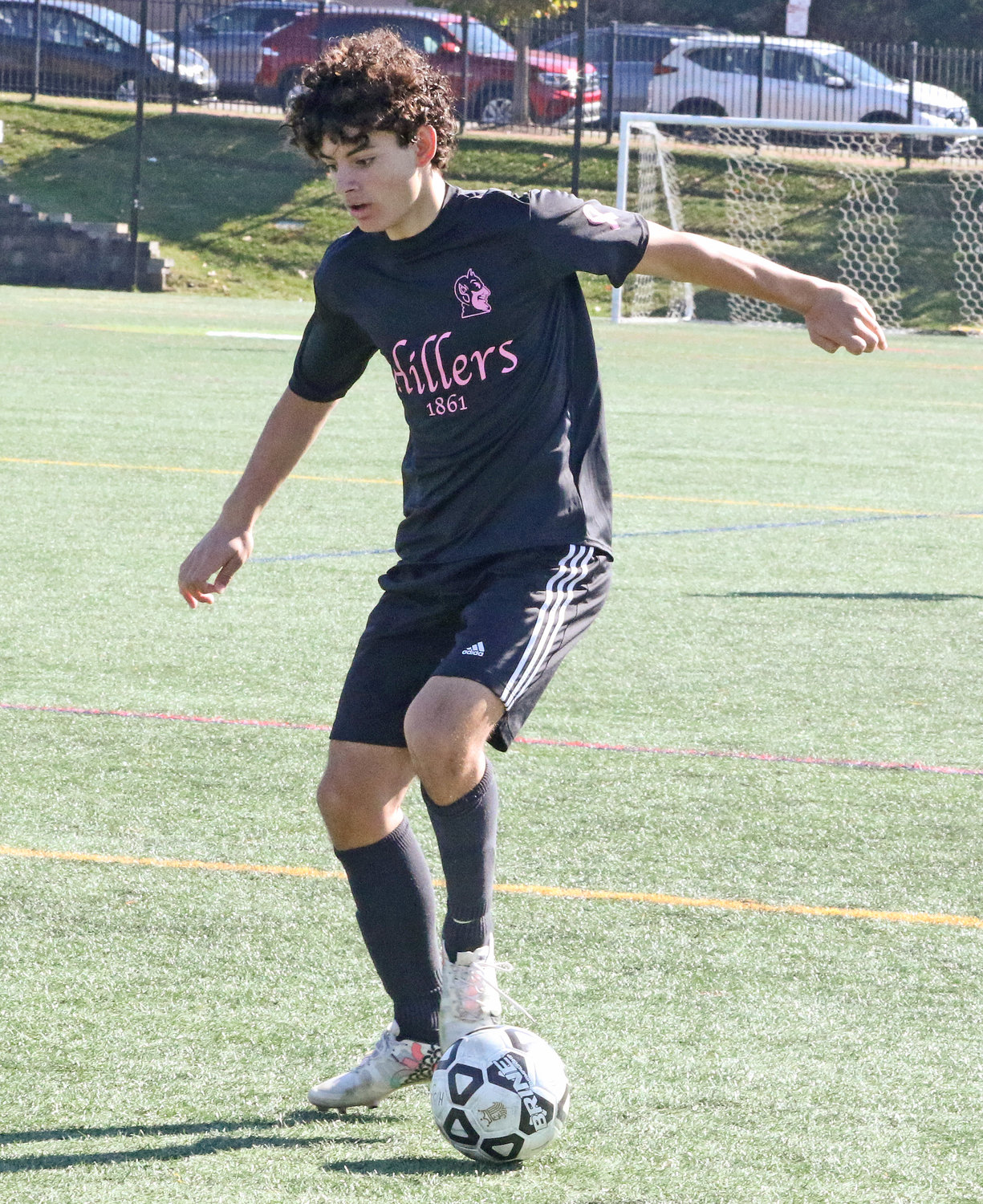 Hillers senior Chris Metsikas controls the ball out on the left wing.
Photo by Tom Utescher 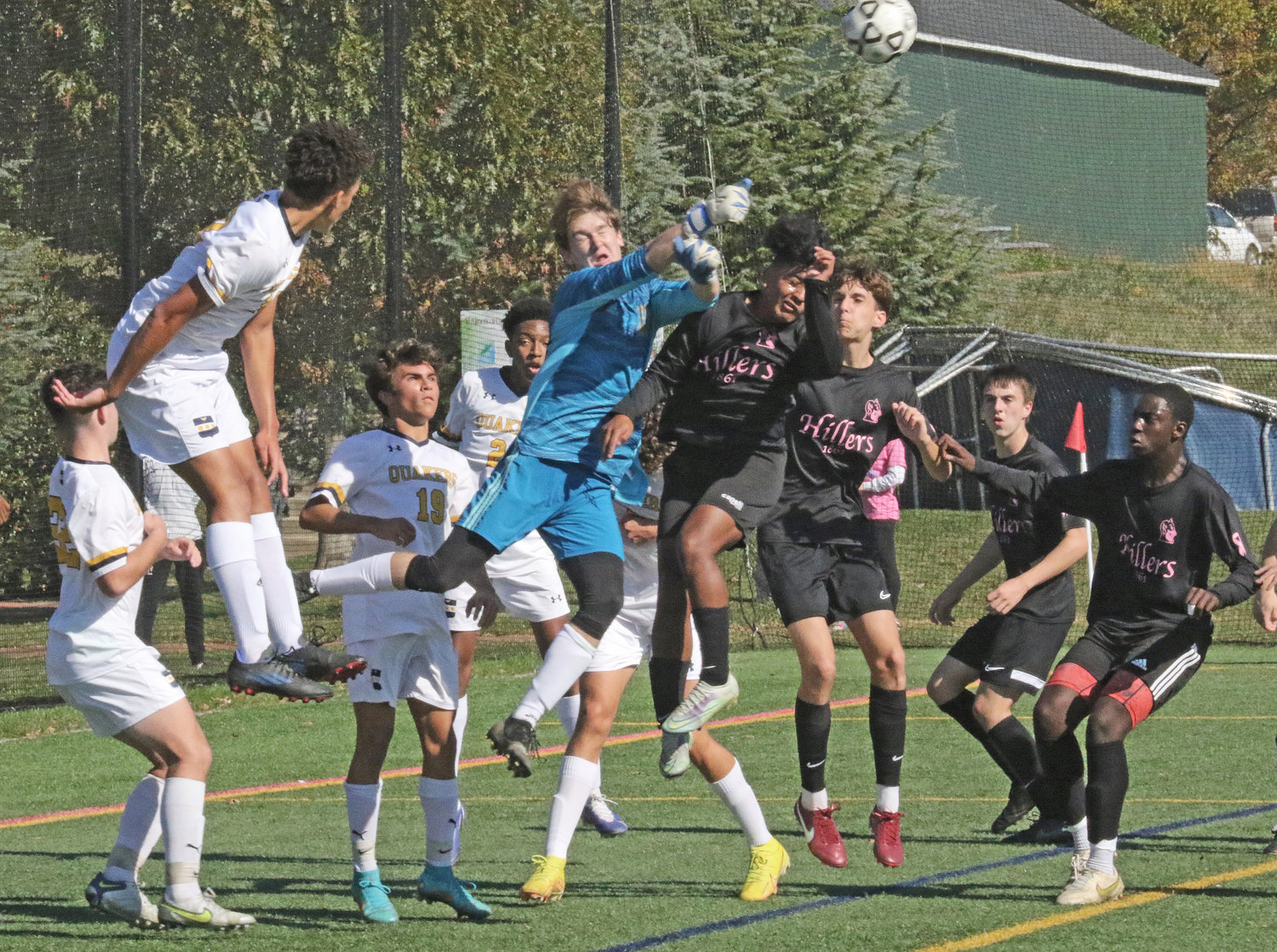 At top center, PC junior goalie Pete Punchello (in blue) punches the ball away from leaping SCH senior Danny Heep as other players participate in the ballet.
Photo by Tom Utescher
Previous Next
Posted Thursday, October 27, 2022 12:00 am
by Tom Utescher

In a rematch at SCH just two days later, it appeared near the middle of the second half that the teams could wind up in another draw, this time with a 0-0 score. There would be no overtime this time, though; with 20:38 remaining in regulation play senior Owen Black scored for the visitors and Quakers went on to a 1-0 victory.

"This is now our eighth or ninth one-goal result, and unfortunately we've been on the losing end of most of those," related head coach Brian Zalasky.

Aside from missing senior J.T. Hughes for a long spell due to a muscle tear, wear and tear on the Hillers has been relatively normal during the season, and there's not really a physical cause for the club's troubles.

Zalasky said, "I think it's mostly just finishing, because we possess the ball and control the ball as well as any team in our league. We get the ball through the midfield, we cycle it around and get into the attacking third, but we haven't been able to find that scoring touch. There's a sort of undefinable quality that enables you to consistently put the ball in the net."

SCH junior Zayd DeVeaux had the knack early in the second half of Thursday's game against PC, scoring off an assist from classmate Peter Shea to put the Hillers up 1-0. It looked for some time as if the Hillers might ride that slim lead to victory, but with under two minutes to go junior Britt Armbrister leveled the score for the Quakers.

Neither team scored in overtime, leaving a 1-1 tie on the board.

At the time of Saturday's rematch Charter was missing three players who had started earlier in the season, including talented all-rounder James Melnick, a junior.

Still, the Quakers initiated the offense in the weekend clash, earning a corner kick on which the ball was headed away, and then continuing to attack to give SCH freshman goalie Cole Carberry an early workout. A little later senior Colin Woehlcke led a charge for SCH, but the ball got too far ahead of him and PC junior goalie Peter Punchello ran out to scoop it up.

At the other end, PC's Black had a direct kick rise over the SCH crossbar, and a little later when he centered the ball on an attack up the right wing, SCH junior Jameson Callas got a foot on the ball to deflect it.

Overall, Punchello would see more action than his SCH counterpart. The Hillers got off more shots than the visitors during the game, and they led 7-5 in the shot column at halftime, when the score was 0-0.

The Quakers pushed up on offense as the second half began, then the Hillers reversed the flow of play. Punchello had to range far out of the PC cage to break up a threatening SCH rush led by senior Ryan White.

The Quakers' keeper cleared the ball out on a Hillers corner, and then he saw a shot from the middle of the box by SCH senior Danny Heep zip outside of the left post. On another corner the hosts had the ball strike the left post, but they did not score.

After this stretch of SCH offense extended into the middle of the second half, Penn Charter had numbers coming up the field in an attacking sequence. On a long cross from out on the left wing, 10th-grader Tazio Perkins sent the ball over towards the right post of the Hillers' cage, and Black sealed off the play from the weak side and scored.

The lone goal of the afternoon went up on the board with 20:38 remaining.

Just before and just after the clock got down to the 15-minute mark, the Hillers had a pair of long free kicks. The first was in the air and the second was kicked along the ground, but both times the ball was cleared out by the Quakers before a shot could be taken.

In the final phase of the game Springside Chestnut Hill applied pressure much of the time, save for the occasional Penn Charter counter. With under three minutes left a long direct kick by Woehlcke went over the cage, and on an SCH corner from the left the ball glanced off a head in the box but kept on going out the far side. On a long, high goalie punt by Punchello that sailed in the Hillers' half, junior Abdoul Diallo got a great head on the ball that sent it back well over the midfield line, but in the end SCH could not secure a tying goal.

As Hillers mentor Zalasky summed up, "We have no other choice but to be positive, keep working, and hope luck will break our way."