Two separate shootings last week have left some neighbors in Germantown and Mt. Airy concerned about safety in their communities. 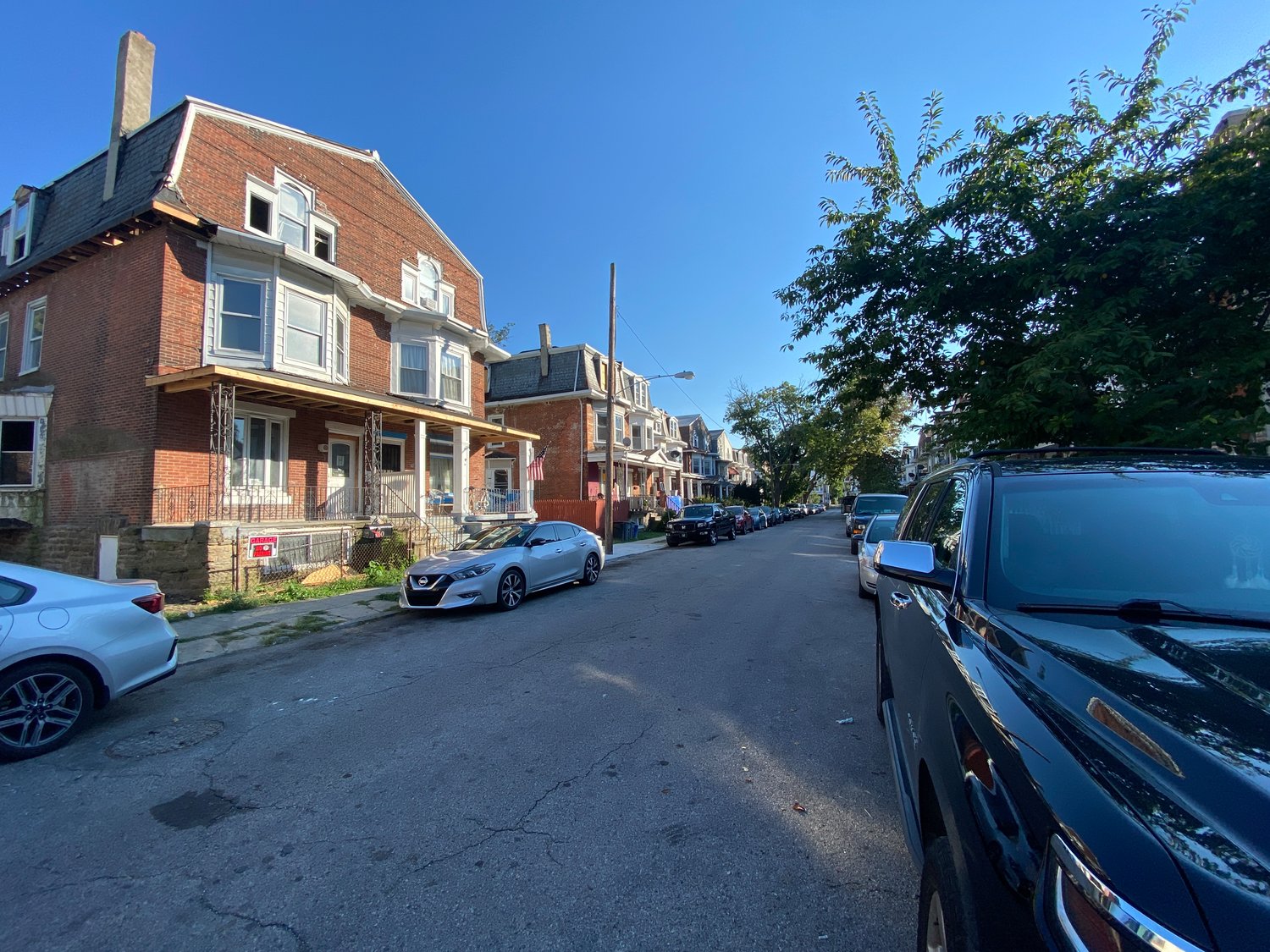 Longtime residents say the unit block of West Pomona Street has become a much safer place to live over the years despite a recent shooting.
Photo by Tom Beck 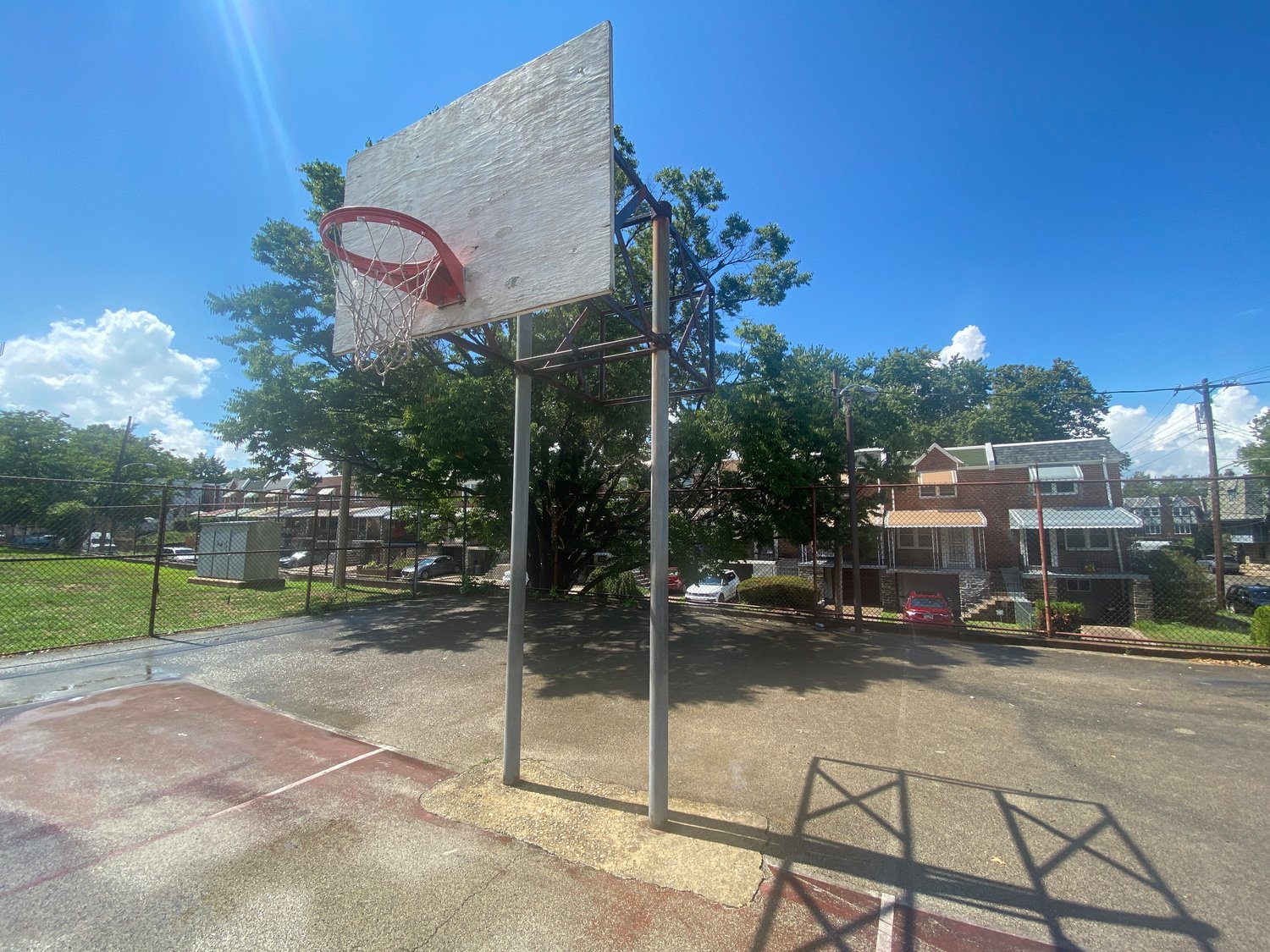 The 300 block of Pleasant Street sits behind the basketball courts at Pleasant Playground.
Photo by Tom Beck 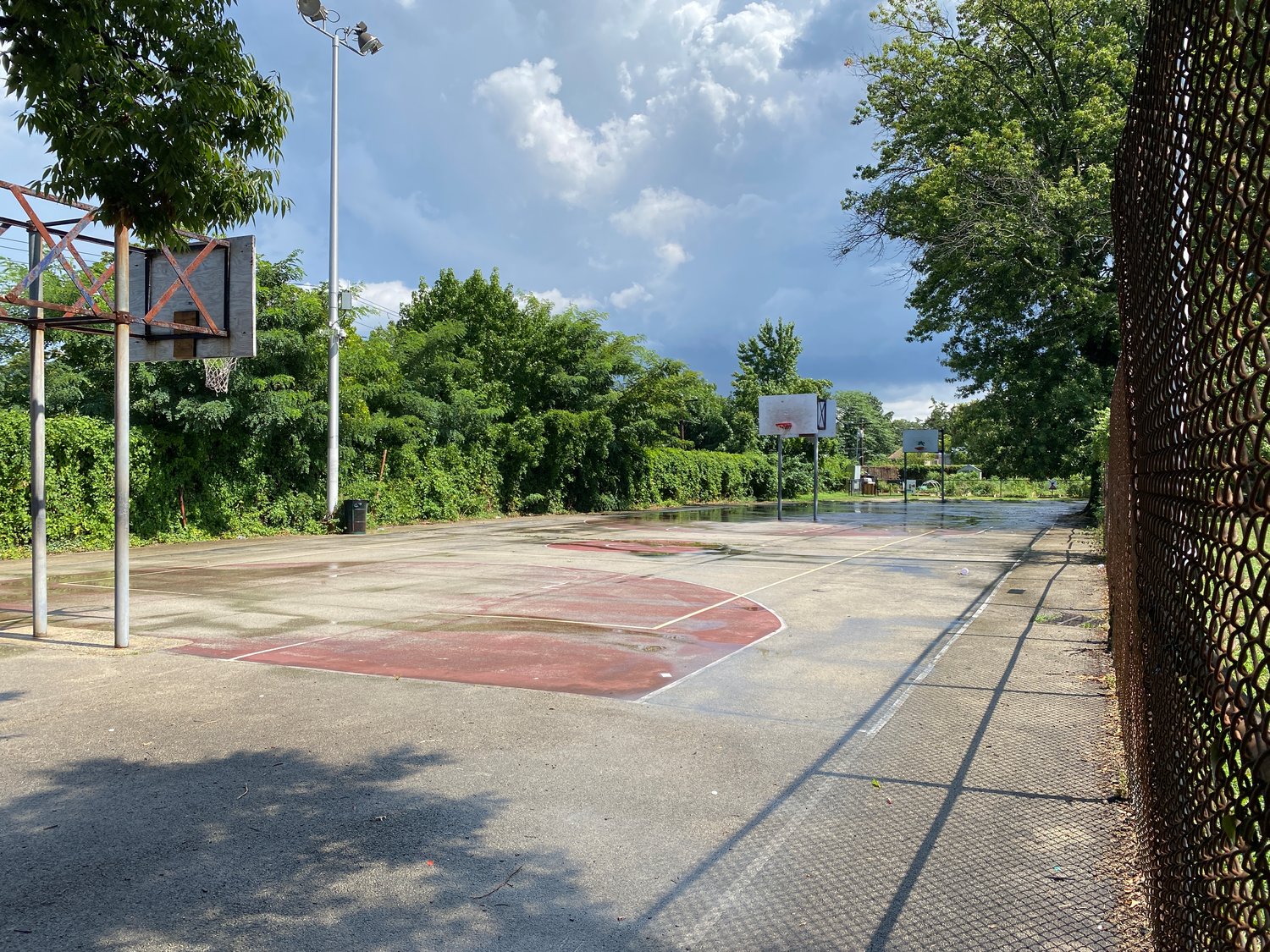 The basketball courts at Pleasant Playground.
Photo by Tom Beck 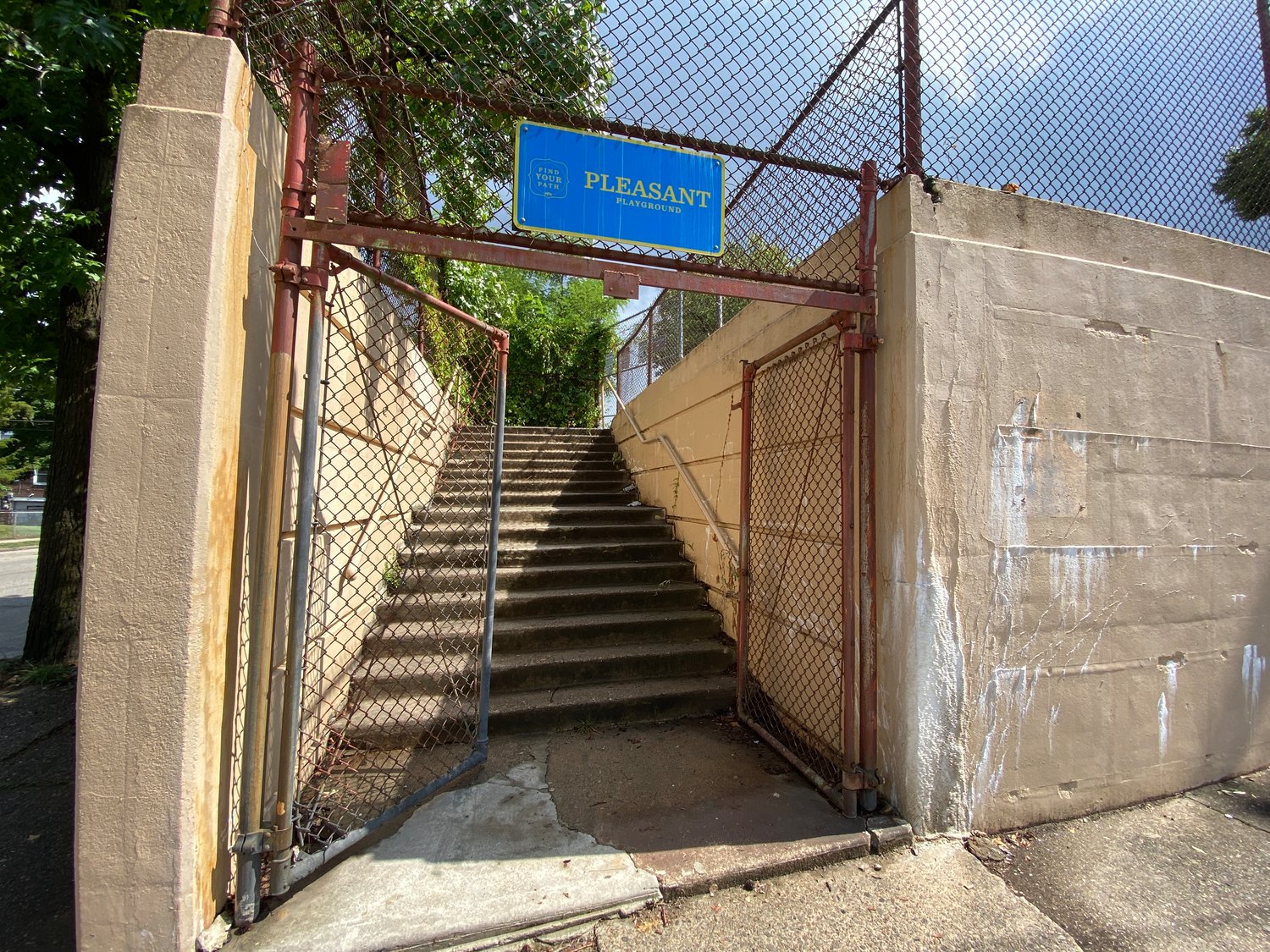 A resident who lives on Pleasant Street said he saw three of the victim’s friends carrying the injured victim down these steps after the shooting.
Photo by Tom Beck
Previous Next
Posted Wednesday, August 24, 2022 12:00 am
by Tom Beck

Two separate shootings last week have left some neighbors in Germantown and Mt. Airy concerned about safety in their communities.

In the first shooting, which happened Wednesday morning in Germantown, the block captain for the unit block of West Pomona Street was shot in the chest after chasing down thieves who were trying to steal the catalytic converter from his parked van. The second shooting happened the next day at Pleasant Playground in Mt. Airy – when at about 10:30 p.m., a 22-year-old man playing basketball was shot multiple times in the head and buttocks by a group of men who hopped out of a car.

Neighbors on Pomona Street say the shooting came despite years of improvement on the block.

“This block has come a long way,” said Jada, who’s lived on the block for about 30 years and declined to give her last name. “It’s really changed in the last three to four years.”

Jada’s grandchildren played and rode scooters along the street as the Local spoke with her. The Local asked her if she’s worried for their safety in the wake of the shooting.

“There’s always concern,” she said. “But you do what you have to do. I’m sure it’s traumatizing for them also.”

She described the block captain, who is currently in stable condition at Einstein Medical Center after undergoing surgery, as “a very approachable guy” who is “very dedicated to the block.”

Another neighbor, who identified herself as Jen K., called the block captain “a really nice guy who’s always trying to help.”

“He’s very neighborly,” she added. “If something was wrong he’d always try to help.”

Bernard Lambert, a block captain and community activist who lives just a few blocks away, is also familiar with the street, and agreed that the recent shooting does not reflect daily life in the neighborhood.

“I’ve seen many tragedies through the years on that block, but it has gotten better,” he said. “Within the last five to 10 years, it's been a transition to where it was to where it is now. It's always been a great block with potential.”

Lambert said that a lot of the longtime homeowners have sold, opening space for new owners to renovate and update them. As a result, Jada said, the block has become more diverse.

“You used to see young folks hanging out here and lots of suspicious activity,” she said. Now, she said, “it’s totally different.”

The block captain was shot in the upper left chest area, according to police. Police also said that surveillance footage captured four males exiting a silver vehicle to steal the catalytic converter off the block captain’s white Ford van at about 5 a.m. Two of the men crawled under the van while the other two kept watch.

While long-term neighbors like Jada who have lived on the block for decades appreciate the positive changes, neighbors who have recently moved to the block find themselves more concerned for their safety.

“It’s terrifying,” said Steph Vogel, a parent of two children aged 10 and 7 who moved to the unit block of Pomona Street last October. “If I have to worry about my kids getting shot, I’m out of here.”

The 22-year-old who was shot at Pleasant Playground in East Mt. Airy and is currently in critical condition at Einstein Medical Center was shot while playing basketball at the playground, which is about 10 blocks away.

Vogel said that prior to the recent incident, she had not been concerned about her family’s safety. For the majority of the 10 months she’s lived on the block, it's been “a super quiet street.”

“It’s awful and it's making me rethink living in Philadelphia,” she said. “It’s out of control.”

A neighbor who lives across the street from Pleasant Playground named George said he was home watching TV the night of the shooting.

“I heard a series of eight shots and then a couple seconds later I heard another eight shots,” he said. “There was a young lady with him on the phone who was yelling ‘Mom, he got shot, he got shot.’”

George, who declined to give his last name, peered out his window and saw three of the victim’s friends trying to carry him down the playground steps at the corner of Pleasant and Boyer Streets.

“I feel devastated,” he said. “Stuff like that doesn’t happen around here.”

Shana Dixon, who lives adjacent to the playground on Clearview Street was also home watching TV the night of the shooting.

“It sounded like it happened right below our window,” said Dixon, who’s lived on Clearview Street for more than 40 years. “I yelled to my mom and children to get down.”

Dixon, who had her door and windows open at the time because it was a cool night, said she didn’t hear any kind of verbal dispute that may have preceded the shooting.

“It’s not unusual for me or my mom to be out on the front porch that late,” she said.

Typically, “nothing major” happens in the neighborhood in terms of crime, Dixon said. Despite that, she refuses to let her 12-year-old play in the playground. Whenever she goes out, she said, she also makes it a priority to get home before dark.

“I was never worried and now I’m worried all the time,” she said.

Her father, a defense attorney named Robert Dixon, was less fazed by the shooting.

However, he was concerned for his family.

“Crime is more personal around here opposed to having someone try and rob you,” he said. “But you could end up in the middle of something.”

David Collins, who lives on Pleasant Street but wasn’t home at the time of the shooting, said that about five houses on that block recently sold within the past couple months.

“Some people just moved in a month or two ago,” he said. “I would not be happy if that were me.”