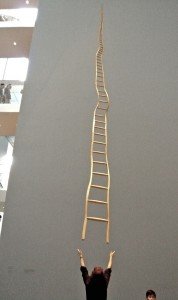 A few days ago I meandered through the art-packed galleries of the Barnes Foundation on the Parkway. I had visited the original museum many times when it was in Merion and, while I loved the art, I was always frustrated that photography within the galleries was not allowed.

I hoped that the rules would be relaxed when the museum relocated in close proximity to the Rodin Museum and the Philadelphia Museum of Art where photography in the galleries is permitted. I thought that the more lenient, progressive approach at these institutions would have influenced the powers that be at the Barnes, but sadly that is not the case.

There was a time when most museums worldwide forbade visitors from taking pictures of the art on their walls and pedestals. As both an art lover and serious photographer, I found this ban particularly annoying and counterproductive to the objective of displaying art publicly.

The original reasons for the restriction are understandable. Foremost, repeated camera flashes would damage delicate art. Another reason was that it could facilitate an art heist. It has also been reported that visitors with cameras slow the flow, particularly in crowded, blockbuster shows. Lastly, use of cameras in galleries robs museums of important sales in their gift shops.

Bulbs covered with modern UV filters will eliminate most of the harmful rays that conservators fear. One way to guarantee there would be no such damage is to add a line on the floor behind which photographers may shoot; similar to the already existing line behind which visitors must stand.

The idea of a second line lacks aesthetic appeal, but the benefit may outweigh the disadvantage. Today's digital cameras, however, have such fast speeds that one can take a pretty good shot without resorting to the damaging effects of a flash. I’ve gotten amazing results, even in dimly lit galleries.

As for visitors with cameras slowing traffic, I wonder whether this belief is based on a guess or is a conclusion based on a scientific field study. In today’s world, surveillance cameras and high-tech security render the concern of art heists as rather far-fetched. After all, museums provide maps of their galleries that thieves would otherwise have to draw in a rather conspicuous manner.

So, I imagine the real reason for prohibiting photography may reside with gift shop sales. It is a fact that revenues from sales are a significant source of income for museums. However, MoMA and PMA, where gallery photography is permitted, do not appear to be filing for bankruptcy anytime soon.

Most people take what might be called "record shots" of a painting or a piece of sculpture as a kind of digital souvenir. Others, with family members in tow take snaps of their loved ones standing in front of a famous work of art; a scrapbook kind of remembrance.

More art-serious museum visitors, including practicing artists, photograph particular art works much like artists throughout history set up easels in museums and copied great works. Their goal was often to master a particular artist’s technique or perhaps to have a copy to enjoy in their own studio before photography itself made images of the great works a commonplace on the coffee table.

It is my opinion that allowing photography in museum galleries advances the value of art and makes going to museums a more interesting and compelling experience. I must confess I go to museums to take photographs that most people would find quite odd. I look for opportunities to take a photograph that becomes what someone might term a “new work of art.”

Consider the photograph that appears in this article. I took it at MoMA several years ago when I was fortuitously in the right place at the right time. A woman stood in front of a wiggly tapering wooden ladder executed by artist Martin Puryear. The construction, called "Ladder for Booker T. Washington," utilizes its distorted sense of perspective to suggest a goal beyond reach.

The woman was gesturing as if she might be throwing the ladder up on the wall herself or possibly just expressing her boundless appreciation for this simple inventive, exquisitely executed work. I swear it was not staged; for me it was just a very lucky moment. Click! One work births another.

There are other reasons to support the taking of photographs in museum galleries. Photographs can be the equivalent of an artist’s notepad. Instead of an artist standing in front of a work of art and sketching a detail for later reference (which could annoy other gallery visitors and slow traffic), a quick click of a camera would have a similar effect.

I’ve taken numerous photos of parts of paintings and the fragment becomes a new composition unto itself that I repeatedly enjoy in the years that follow.

A quirkier habit I have is photographing the feet and shoes of people who are viewing the art in museums. The museum lighting is great and visitors oftentimes don their artiest footwear ranging from brand-new, colorful Nike sneakers to high fashion, Italian leather brand names. As they lean forward from behind that line on the floor, their feet often fall into slightly awkward positions, which result in a striking composition.

During a recent MoMA visit, a woman accused me of photographing the legs of a female visitor. In fact I was focused on her platform shoes, although I cannot deny that her legs were lovely. I briefly tried to explain to my accuser that an art museum is a place where one can also create art, not just observe it, but my argument fell on deaf ears.

My hope in writing this article is that one photographer's view on photography in art museums will reach the few authorities who persistently enforce this ban. But like Martin Puryrear’s wooden ladder and the woman with her hands raised in appreciation, this may simply be a goal beyond reach.

No comments on this story | Please log in to comment by clicking here
Please log in or register to add your comment
Donate now to CH Local
The Latest
Phase 1C eligibility for COVID-19 vaccine starts Monday, April 12
More groups have been added to Phase 1C, including people receiving home and community-based services.