The Episcopal Church of St. Martin-in-the-Fields, Chestnut Hill, marked the second week of Advent with an abbreviated and updated “Lessons and Carols” presented Dec. 4. 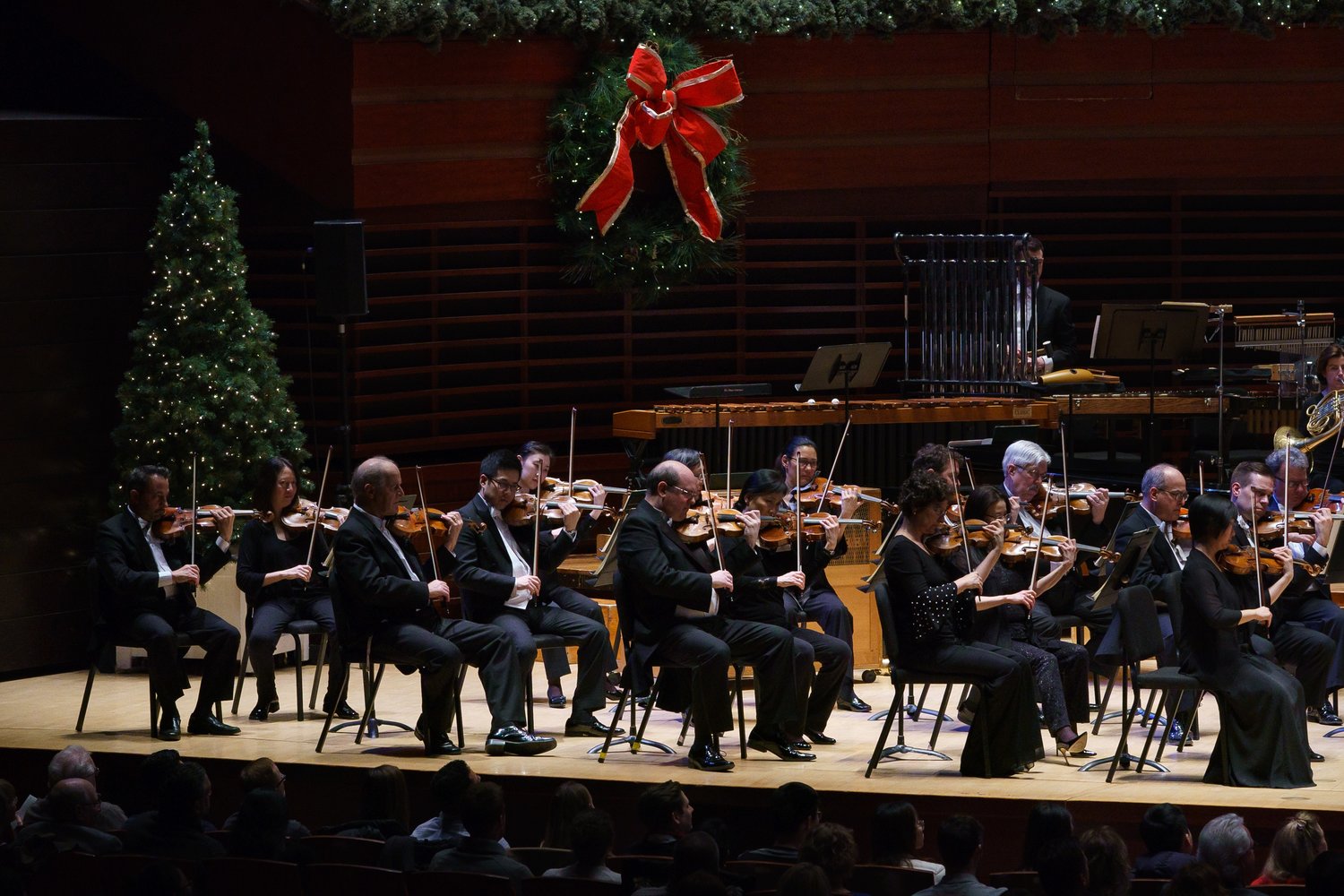 The Philadelphia Orchestra will perform “The Glorious Sounds of Christmas at 7 p.m. Wednesday, Thursday and Friday, Dec. 21-23, at the Kimmel Center’s Verizon Hall. 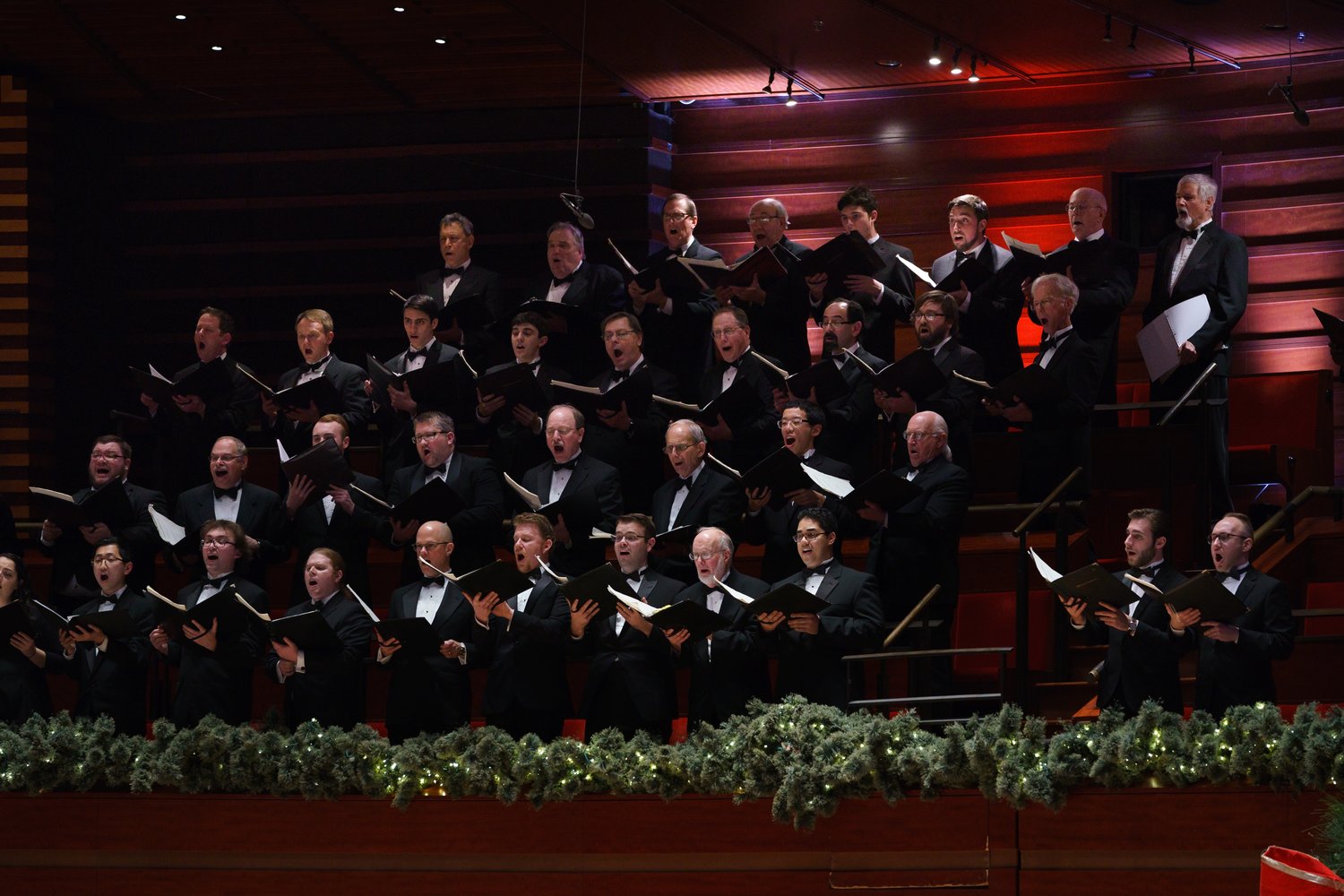 The Mendelssohn Club will perform with the Philadelphia Orchestra.
Previous Next
Posted Thursday, December 15, 2022 12:00 am
by Michael Caruso

The Episcopal Church of St. Martin-in-the-Fields, Chestnut Hill, marked the second week of Advent with an abbreviated and updated “Lessons and Carols” presented Dec. 4. Parish music director Tyrone Whiting led his choristers in admirable renditions of two responsories and five anthems, heard in between gender-inclusive prayers and readings.

Traditionally, the liturgy is for “Nine Lessons and Carols.” It was established at the Chapel of King’s College, which is part of Cambridge University in England, shortly after the conclusion of World War I. The immediate carnage of the “Great War” was merely a harbinger of the social and economic catastrophe that was to follow in its wake. The full classic liturgy can often run close to two hours, especially if the celebrant delivers even a short homily. At St. Martin’s, the service took a brief hour.

The two responsories were choral works adapted from scores composed by the Italian Renaissance master Giovanni Pierluigi da Palestrina (1525-1594). His original Latin texts were beautifully translated into the traditional English of the King James version of the Bible. Both were sung with exquisite balance, immaculate tuning, seamless blend and eloquent phrasing.

The first of the five anthems performed by the parish choir under Whiting’s sensitive leadership was Elizabeth Poston’s modern arrangement of the lovely, old-fashioned “Jesus Christ the Apple Tree.” It received a gentle reading that caught the music’s unaffected, sweet conviction of faith.

William Byrd’s “Ave Verum Corpus” (“Hail the True Body”) was next on the musical roster. Sung in its original Latin – with all that language’s simple clarity of tone – the choir achieved a quality of chaste reverence and awe that impressed the ear, touched the heart, moved the soul and inspired the spirit. Even without the angelic purity of the boy trebles for which it was originally composed, St. Martin’s choristers sang it memorably as a result of Whiting’s delicate hand.

Michael Praetorius’ “Es ist ein Ros’ entsprungen” (“Lo, who a Rose e’er blooming”) was heard to emotional effect in Donald Cashmore’s arrangement. Whiting elicited an exceptionally warm timbre from his singers, shaping the phrases naturally according to the flow of the text.

Philip Ledger’s arrangement of the Old English carol, “Adam Lay Ybounden” was given a finely wrought reading that boasted lightly voiced singing by the men of the choir. The afternoon’s final anthem was Paul Manz’s “E’en so, Lord Jesus, Quickly Come.” Its text is a marvel of expectation – for the first coming of the Messiah at the time of Jesus’ birth in Bethlehem of Judea and for his second coming at the consummation of the world by Christians throughout the ages. Whiting led his choristers with strength of commitment and delicacy of texture.

When I was a kid growing up in the 1950s, it was a “local article of faith” among classical music lovers that Eugene Ormandy and the Philadelphia Orchestra were the greatest pairing of maestro and symphony in the world. While that was undoubtedly a “local” exaggeration, “Ormandy and the Fabulous Philadelphians” were, in fact, the dynamic duo of the classical music recording industry. No other conductor and ensemble sold as many LPs as they did for Columbia Masterworks.

Their albums outsold every other combo of conductor and orchestra. Several even sold more than 100,000 copies, earning them four gold albums. Among their most popular was the holiday album entitled “The Glorious Sounds of Christmas.” Along with their collaboration with the Mormon Tabernacle Choir for George Frideric Handel’s oratorio, “Messiah,” the pair of LPs cemented Ormandy and the Philadelphians as the classical sound of Christmas.

The album inspired a concert program of the same name that became an equally-treasured tradition in Philadelphia. Although, for a time, it disappeared like other parts of the Philadelphia Orchestra’s legacy with its audience, it has returned. William Eddins will conduct three performances of “The Glorious Sounds of Christmas” in the Kimmel Center’s Verizon Hall: Wednesday, Thursday and Friday, Dec. 21-23, at 7 p.m.

The program includes such holiday favorites as Anderson’s “A Christmas Festival,” selections from Tchaikovsky’s ballet “The Nutcracker,” Vaughan Williams’ “Fantasia on Christmas Carols,” and a cornucopia of orchestral arrangements of beloved Christmas carols.

Now all we need is for the concert to return to the glorious Academy of Music.

You can contact NOTEWORTHY at Michael-caruso@comcast.net. To read more of NOTEWORTHY, visit www.chestnuthilllocal.org.