St. Paul’s Episcopal Church in Chestnut Hill and The Crossing helped close out the year 2022 with songs of the season. 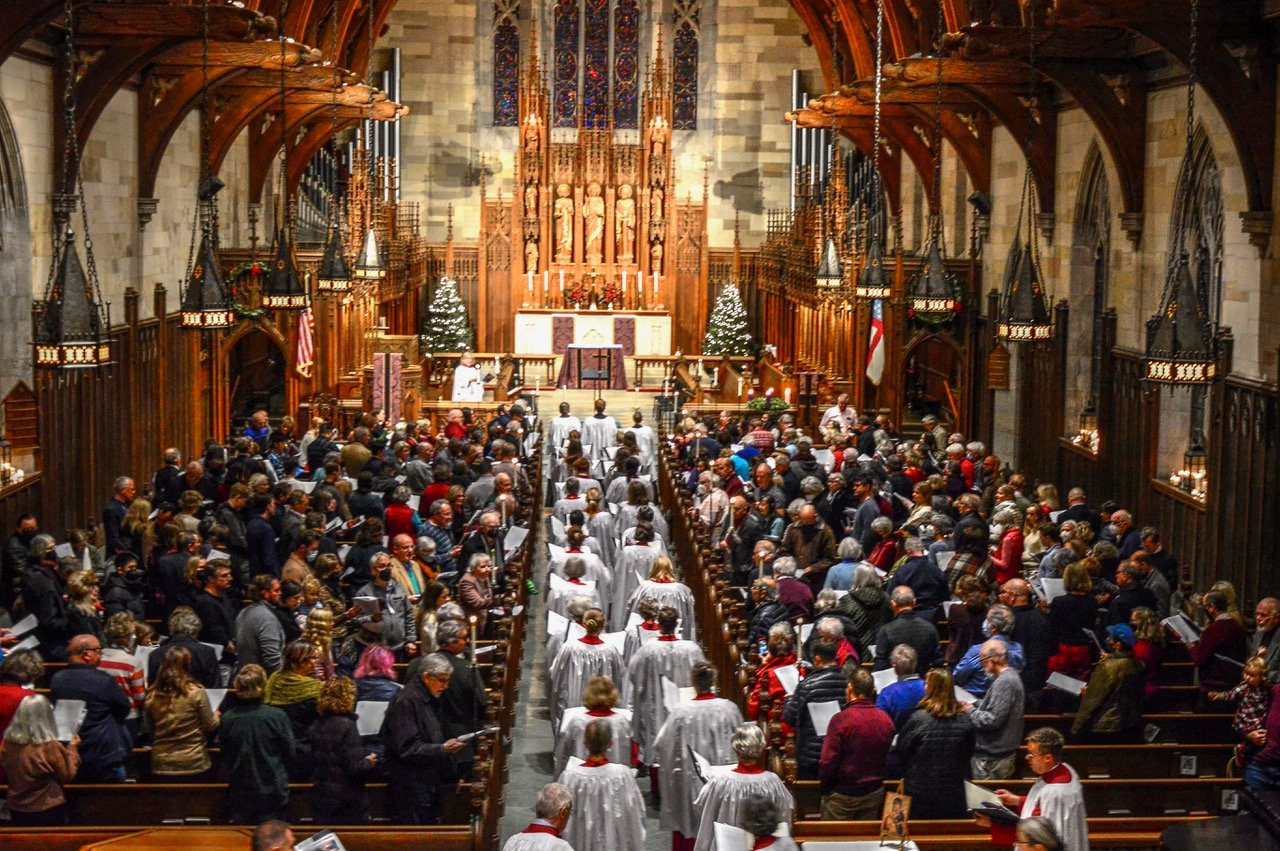 The Adult Choir and Children’s Choristers march into the service at St. Paul’s Episcopal Church.
Posted Thursday, January 12, 2023 12:00 am
by Michael Caruso

St. Paul’s Episcopal Church in Chestnut Hill and The Crossing helped close out the year 2022 with songs of the season. Under the direction of Andrew Kotylo, St. Paul’s celebrated the final Sunday of Advent, December 18, with a glorious rendition of the traditional “Nine Lessons and Carols.” The Crossing, under Donald Nally’s superb direction, presented two performances of its annual “The Crossing @ Christmas” choral concert December 16 and 18.

The tradition of marking the final days of Advent just before Christmas Eve dates back to the years immediately following the conclusion of World War I in the United Kingdom. Instead of the usual Choral Evensong, a new liturgy was introduced to recount the biblical story of the birth of the Messiah, Jesus, in Bethlehem. The “Lessons” begin with the Old Testament prophecies of the long-awaited savior and end with his birth in Judea, a province of the ancient Roman Empire. The “Carols” portion contains both carols sung by the congregation and anthems sung only by the choir.

That tradition was launched in the Chapel of King’s College at the University of Cambridge. It particularly includes beginning the liturgy with the beloved carol, “Once in Royal David’s City,” its first verse sung unaccompanied by a treble soloist chosen that very day from among the Chapel’s boys. Nowadays, most American church choirs plan a little earlier than that.

St. Paul’s “Nine Lessons and Carols” drew a congregation of nearly 400 that heartily joined in

Parish music director Andrew Kotylo conducted the Woodward with a sensitive hand that brought out the Dickensian character of its Old English text. He invested the Webster’s interpretation with a fine touch that balanced its superficial simplicity with its deeper complexity. Archer’s “There Is No Rose'' glowed with a gentle warmth of tone while “I Saw Three Ships” danced with a beguiling bounce. The rendition given the Dubra caught the contemplative character of Eastern Orthodoxy while Biebl’s “Ave Maria '' received a performance that trembled with reverence for the Blessed Virgin Mary. Hancock’s arrangement of “Infant Holy” recalled its simple Polish roots while Kotylo and his choristers gave “In dulci jubilo” a lilting reading. Most touching of all was the performance given Darke’s setting of Christina Rosetti’s divinely inspired text of “In the Bleak Midwinter.” If ever a Christmas poem touches your heart, it’s this one, and Darke set to it music that matches the intimate intensity of the lyrics. It was sung with hypnotic commitment.

As an admitted traditionalist, musically and otherwise, I’m often asked why I’m also such a big supporter of Donald Nally and The Crossing, the choir he founded to promote, commission and perform contemporary choral music. The answer is simple, even though two-part: Nally almost always chooses music from among the best living composers of choral music for his programs and The Crossing invariably renders those scores impeccably, both technically and musically.

The operative word in the first half of that equation is, of course, “almost.” The exception that proved the rule for me was this year’s installment of “The Crossing @ Christmas.” I heard the first performance on Friday, Dec. 16, in the Episcopal Church of the Holy Trinity on Rittenhouse Square, so that I could also hear “Nine Lessons and Carols” at St. Paul’s Church in Chestnut Hill on Sunday, Dec. 18. That was the date Nally and The Crossing sang in the Presbyterian Church of Chestnut Hill, their local home base.

Much of the concert’s singing was accompanied by recorded sound effects. For the most part, I found them to be more of a distraction than an enhancement. If anything, they tended to lull the listener to sleep due to their unrelieved consistency of pseudo-intergalactic tones and timbers as well as their clips of speeches. I must confess: most of the time I was bored stiff even though the singing was superb.