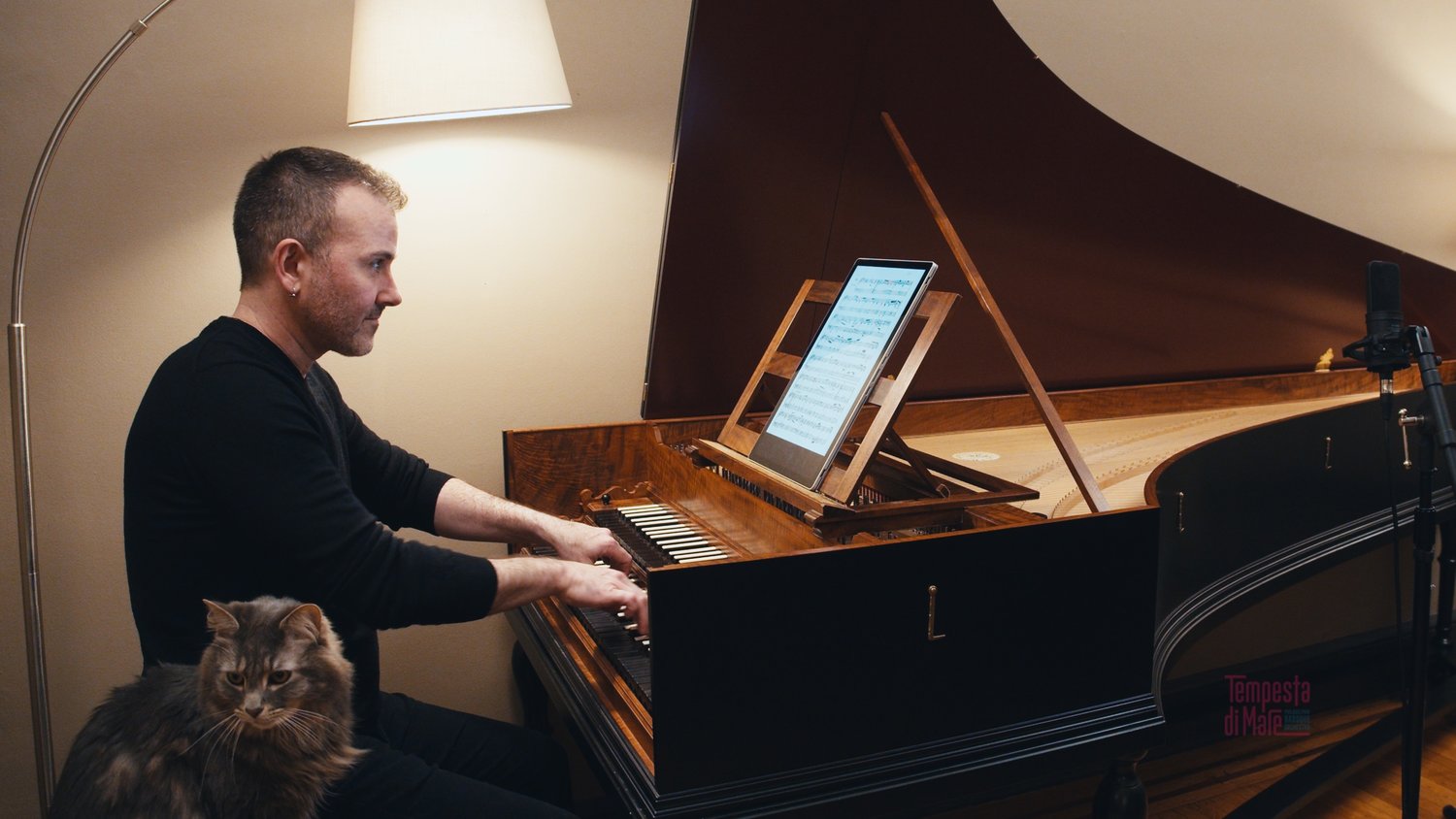 Harpsichordist Adam Pearl, of Tempesta di Mare, and with his Maine coon, Smoky, at the harpsichord during the performance.
Posted Friday, May 14, 2021 11:00 am
by Michael Caruso

Of all the musical events taken away by the COVID-19 pandemic lockdown, none struck me more woefully than the suspension of in-person Anglican Choral Evensong at St. Paul’s Episcopal Church, Chestnut Hill. Offered under the musical direction of Andrew Kotylo, the parish’s celebration of this treasure of the musical patrimony of the Church of England set a local standard of excellence.

The afternoon’s principal score was Martin’s setting of the traditional texts of the “Magnificat” (My soul doth magnify the Lord) and the “Nunc dimittis” (Lord, now lettest thou thy servant depart in peace) from his “Evening Service for St. Paul’s Cathedral, Buffalo (New York State).”

Martin caught the emotional exuberance of the “Magnificat” and the contemplative serenity of the “Nunc dimittis” with a distinctive yet balanced individualism of character. He also displayed a remarkable gift for proffering a variety of choral textures. His use of one of the four vocal ranges (soprano, alto, tenor & bass) for personal statements was inspired, as was his complementing these passages with only soprano & alto or tenor & bass, and then going full throttle with all four together. It made for music of stunning spiritual effect.

Of no less potent beauty was the anthem at the Offertory, Paul Halley’s choral arrangement of the traditional text by St. Bernard of Clairvaux, “Jesu, the Very Thought of Thee.” The composer employed a finely balanced harmonic approach of basic tonality spiced with telling dissonances, all voiced with imaginatively conceived textures of the four vocal ranges.

Tempesta di Mare, Philadelphia’s acclaimed Baroque Orchestra, continued its series of “Artist Recitals” with a “virtual” performance featuring its resident harpsichordist, Adam Pearl. Filmed at his home and streamed over the final weekend of April through the first weekend of May, the Peabody Conservatory of Music alumnus and faculty member played music by Jacques Duphly, Elizabeth de La Guerre, Lois Couperin and Claude Benigne Balbatre.

While all music originally intended for the harpsichord rather than the piano suffers whenever it is transferred from the former to the latter, the degree of damage (if you will) differs from one school of keyboard writing to the next. The harpsichord (and perhaps clavichord, as well) music of Johann Sebastian Bach may come across more effectively on its intended instrument, yet its transcendent beauty and power can be fully and equally appreciated on a modern Steinway & Sons concert grand piano. Many pianists, from Vladimir Horowitz down to the present corps of virtuosos, truly believe that the modern piano is better suited to playing the keyboard music of Domenico Scarlatti than is the dynamically more limited harpsichord.

However, I’ve never met a keyboard player who denies that the French Baroque repertoire can only be completely appreciated when played and heard on the harpsichord. As a result, few if any pianists play French harpsichord music – the exception being Francois Couperin’s sublime “Les Barricades Mysterieuses” – and, subsequently, most American lovers of Classical music in general and Baroque music in particular know very little of the French repertoire of the 18th century.

Performing on his own 2015 John Phillips German-style double-manual instrument, Pearl proffered interpretations of dazzling tonal variety, bracing clarity of texture, superb command of contrapuntal dialogue and thematic development, and a naturally lyrical feel for rubato, the give-and-take of tempo that makes a rendition particularly expressive.

A further and even more unforgettable aspect of Pearl’s recital was the appearance of an unexpected collaborator: Smoky, one of three of his Maine Coon cats. A cat-lover myself, it’s good to know that even music lovers who hail from Maine are attracted to the French repertoire.