Some neighbors have complained about the look of the fabricated stone wall the college is beginning to install as part of its landscaping, as well as plans that call for wide swaths of grass. 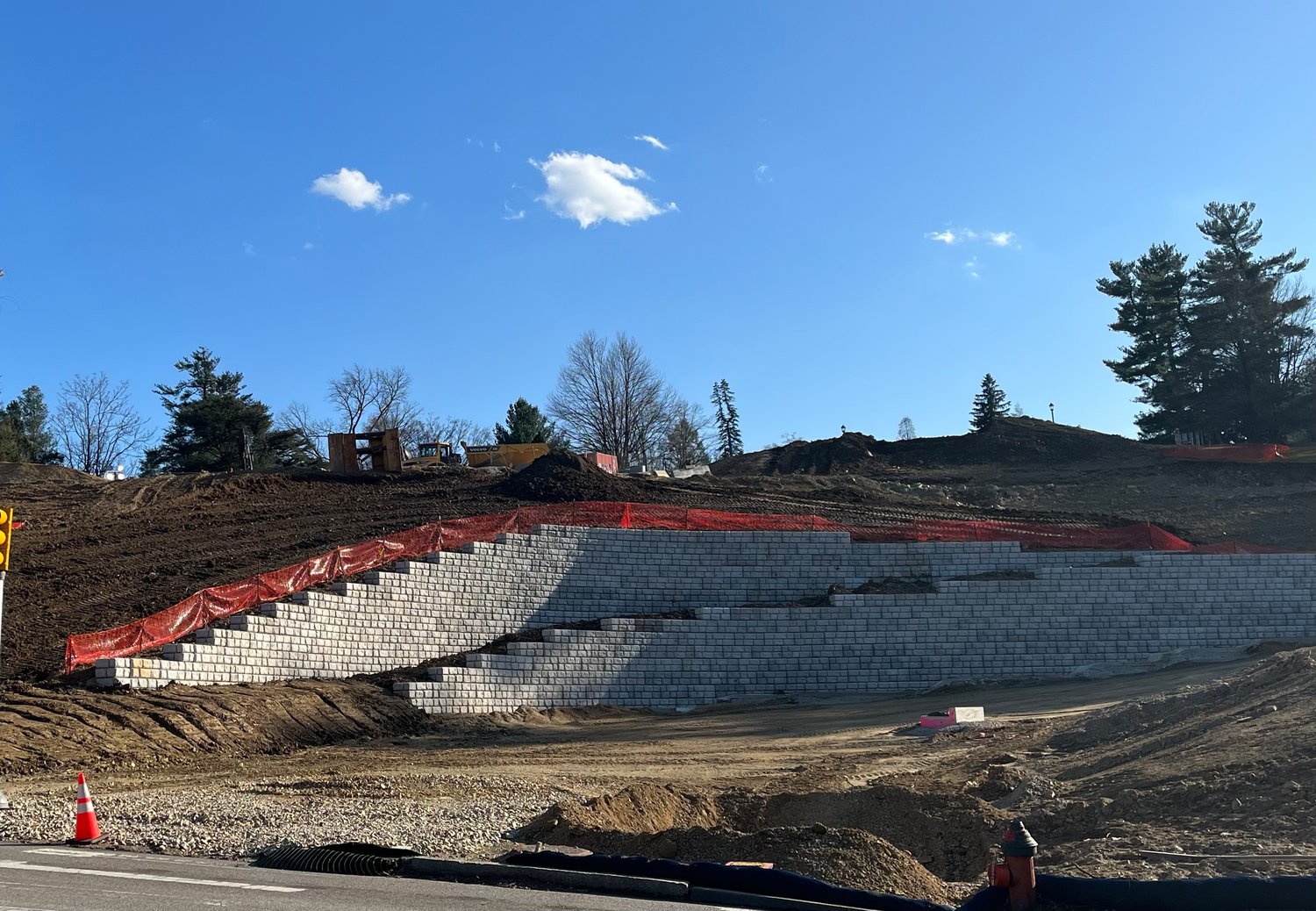 The landscaping wall now going up on Chestnut Hill College's new Sugarloaf campus is upsetting some neighbors, who complain that it doesn't fit into the historic context of Chestnut Hill. Photo by Carla Robinson
Posted Wednesday, March 23, 2022 11:56 am

We are among many in the community who have been shocked to find that this storied educational institution is choosing to continue with such an impactful project without knowing what it might be affecting.”
Lori Salganicoff, executive director of the Chestnut Hill Conservancy
by Carla Robinson

Construction of the Sugarloaf Campus at Chestnut Hill College hit a potential new snag in recent weeks when the Pennsylvania State Historic Preservation Office asked for a survey of possible historic and archaeological sites on the roughly five-acre site.

“It appears there is the potential for historic circulation patterns, landscaping, fencing, stone walls, and other features that contribute to the National Register listed  Chestnut Hill Historic District to be affected,” states the letter, which is dated Feb. 25th. “Therefore, we request more information to complete our review. Please provide information on how this state-sponsored project has been designed to accommodate the project purpose and need while minimizing effects to surrounding historic  properties.”

In addition, the commission is asking the college to evaluate whether the grounds have any archaeological value before disturbing the soil further.

“Based on an evaluation by our staff, there is a high probability that National Register-eligible archaeological sites are present within this project area,” the letter states. “It is our opinion that a Phase I archaeological survey should be conducted to locate potentially significant  resources.”

It’s the latest in a series of hurdles for the college. The project has faced resistance from many members of the community since trees first started coming down on the hillside that runs along Germantown Avenue near the intersection with Hillside Avenue - which is where the college plans to put a new entrance to the campus.

According to Anne McNiff, executive director of the Chestnut Hill Community Association, a number of residents have complained about the look of the fabricated stone wall the college is beginning to install as part of its landscaping, as well as plans that call for wide swaths of grass.

“I have heard people say it looks more like an office park than it does the entrance to a historic community like ours,” McNiff said. “I think people would prefer that the wall be faced of schist or bluestone, and that the grounds would have more of a native tree canopy.”

The commission does not have the power to order a halt to the current digging. But it is asking the college to provide this information before it can give its approval for the project to move forward.

Lori Salganicoff, executive director of the Chestnut Hill Conservancy, said the college should have completed the review before starting construction, and asked that the school pause its work until the assessment is complete.

“We are among many in the community who have been shocked to find that this storied educational institution is choosing to continue with such an impactful project without knowing what it might be affecting,” Salganicoff said. “It is impossible right now for the community to know whether there will be no impact on the nearby historic architecture and likely archeological resources, or whether this project will result in the destruction and damage of important resources before they are investigated, discovered, and understood.”

The college would have been required to complete the review before starting work if it were using federal funds, Salganicoff said.

“The spirit of that review remains the same, however - learn what you are working with before you potentially destroy it, and if you find something of significance, shift your plans to lessen the damage you do,” she said.

Chris Spangler, spokesman for the college, told the Local that the school is planning to respond to the state’s requests. He did not say whether the college plans to continue construction in the meantime.

“An archeological survey is underway, This survey will identify any areas of archaeological potential and assess the probable impact of the project.  They will also provide an assessment of the project impact to the Chestnut Hill Historic District,” he wrote in an email. “Preliminary review indicates little or no archaeological potential and negligible impact to the Chestnut Hill Historic District. We will share the summary results of the survey and assessment when complete.”

Specifically, the state commission is asking:

Meanwhile, neighbors remain concerned about how the blasting that’s required to cut away that part of the hillside will impact their properties.

Bill Valerio, director and chief executive officer of the Woodmere Art Museum, which is directly across the street, said his engineer has recommended that they put a seismic monitor in the basement during the blasting, and that they have someone watch the process.

“It's my responsibility to take care of Woodmere’s assets, including the buildings, so I asked the college whether my engineer could consult with theirs about the blasting,” he said. “Their engineers were open and forthcoming, and on the basis of those conversations, engineer-to-engineer, this is what we decided.”

“He came back and told me that the risk was low, but that it wasn’t “no-risk,” Valerio said. “This is how we’ll be able to know whether the blasting is having an impact.”

When complete, the four-way intersection at Hillcrest Avenue will include handicapped accessible ramps, sidewalks, walls, fences, lighting and a paved pedestrian trail to an existing pedestrian bridge over the Wissahickon Creek.