People who live on Highland Avenue got an unpleasant surprise last week when the warm yellow glow of their street lights suddenly became a harsh white glare. 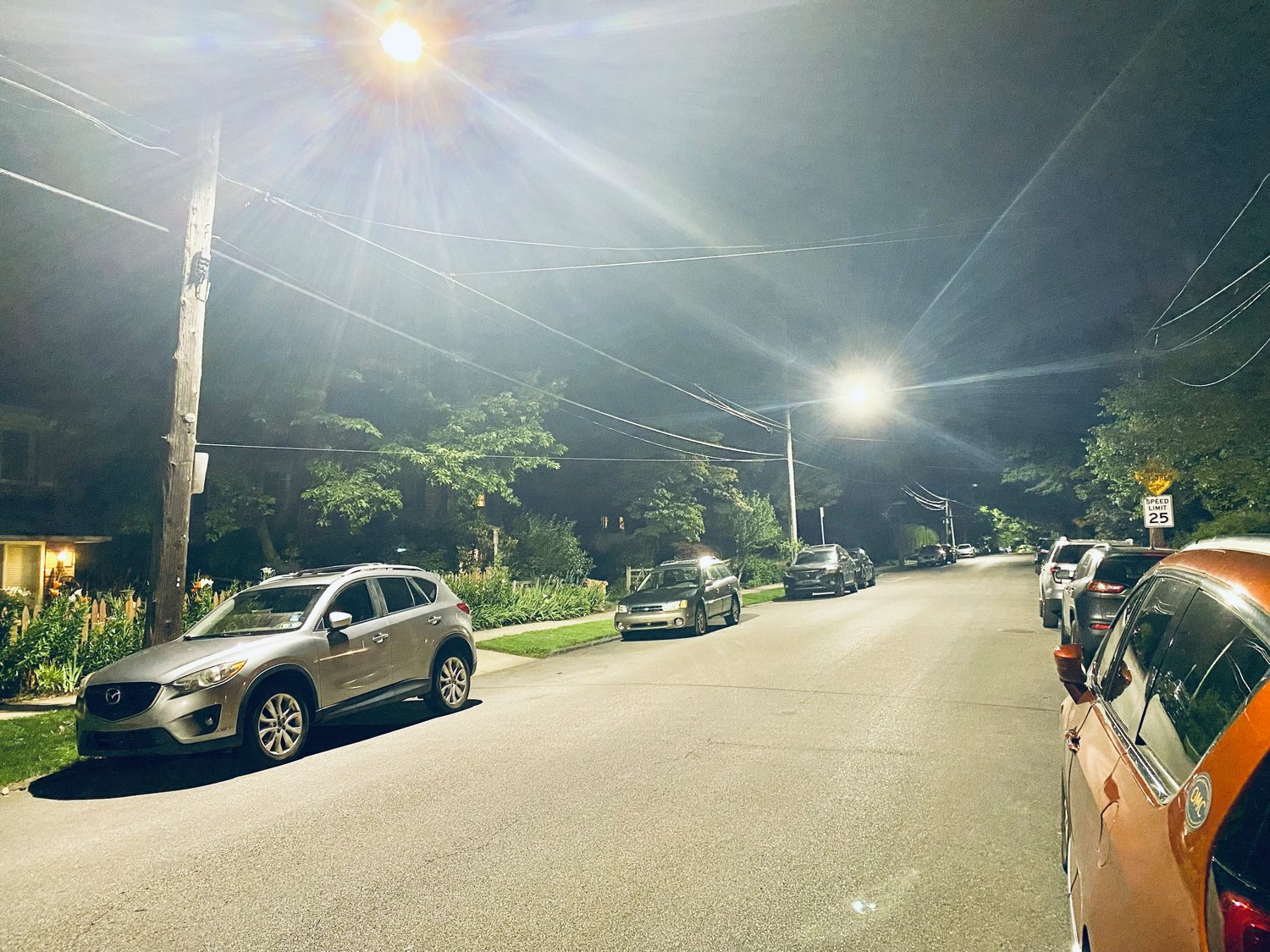 New street lights on Highland Avenue are so bright that neighbors say they make the street look like a “landing strip.”
Posted Wednesday, July 6, 2022 12:00 am
by Carla Robinson

People who live on Highland Avenue got an unpleasant surprise last week when the warm yellow glow of their street lights suddenly became a harsh white glare - completely changing the nighttime character of their block.

Anne McNiff, executive director of the Chestnut Hill Community Association, said she has been fielding numerous complaints from residents who say they feel like their street has been turned into an “airport landing strip.”

“A lot of people are really quite upset about it,” said McNiff, who has been working to get answers from the city Streets Department.

The new lighting is a product of Philadelphia’s Citywide LED Street Lighting Conversion Project, which is slated to convert 120,000 old, high-pressure sodium street lights into a network of efficient, longer-lasting LED lights. The new bulbs are expected to save about $5.4 million a year in energy costs and cut carbon emissions at a level equivalent to taking nearly 12,000 cars off the road.

Complaints are not about the switch to more energy-efficient bulbs, McNiff said. Rather, they focus on why the new bulbs need to be so bright, and whether their color is too harsh.

According to a planning map obtained by McNiff, the new bulbs on Highland Avenue are 18,000 lumens, which is twice the brightness of bulbs planned for many streets nearby. The same map shows several other residential streets are slated to get the same treatment - including St. Martins Lane, Seminole Street, Winston Road and Bethlehem Pike. (see graphic for more details).

Staffers from the office of City Councilmember Cindy Bass told the Local they did not know why the lights on Highland are so bright, and that they have been fielding similar complaints about overly-bright lighting from elsewhere in the district.

McNiff said she contacted the Street Department’s planning unit, where she was told that residents should call or email Patrice Nuble, chief street lighting engineer, with their complaints.

According to the Streets Department website, a hearing for the city’s ordinance to approve the Street Lighting Conversion Project ordinance occurred on May 18, 2022.

Sadie Francis, board member of bioPhilly, a loose network of architects, scientists and climate activists that are working toward a “climate-resilient city that is universally restorative of public health,” said what appears to be white light emitted by many of these high-intensity bulbs is actually blue, and can pose health risks to humans, animals, birds, and insects.

But intensity matters too, she said.

Light intensity is measured in lumens (similar to watts) while its color hue is measured in Kelvins, with higher numbers being closer to the unhealthy blue spectrum and lower numbers moving toward yellow. And according to a 2016 study by the American Medical Association, excessive blue light alters the biological clock of humans as well as various other forms of life.

“Our brains pick up blue light as daylight,” Francis said. “The warmer tones don’t have the same detrimental effect on our circadian health.” Circadian is the natural cycle of physical, mental and behavior changes that the body goes through in a 24-hour cycle. (As of press time on Tuesday, the Local had not determined what the color range of the new lights on Highland Avenue is.)

Francis said she applauds the city’s move toward energy efficiency. But she and others in her group are hoping for a more holistic approach.

“We all agree that LED bulbs and energy efficiency are a good thing,” she said. But there are better ways to install these new bulbs - which is something that other cities are now learning.

“They’re not considering how their choices affect not just human health, but also birds and night pollinators. There’s a whole ecosystem that's being impacted here,” she said. “We should be treating light pollution just like any other kind of pollution.”

Police departments like the brighter lights because they make it easier to see faces captured on security cameras at night.

But according to both Francis and Larry McEwen, a CHCA board member and architect who has designed many public projects that have public safety demands when it comes to lighting, such bright lights actually result in less safety.

“The really bright lights create such intense shadows that a person standing in the area that is lit can’t see what might be lurking in the shadows,” McEwen said. “It actually makes the person much more vulnerable.”

What other cities are doing

Washington, D.C., also had this problem. Three to four years ago it had begun installing the 4,000 kelvin LED bulbs, prompting such an outcry among residents that it had to start over. That city is now using 3,000K bulbs in commercial areas and 2,700 bulbs in mostly residential areas.

“People were complaining that they felt like they were in a prison yard,”
Francis said. “So the city had to do it twice, because the color range and intensity turned out to be untenable.

“We’re trying to prevent Philadelphia from making a similar mistake,” she said.

In August of 2021, Pittsburgh announced a new dark sky lighting ordinance for all city parks, facilities, and street lights, which requires the city to use lower color temperature bulbs, and to direct the lighting only to where it needs to go.

In Pennsylvania, state Sen. Carolyn Comitta, who represents the 19th District in Chester County, has introduced a statewide dark sky ordinance - which would require low temperature LEDs to be shielded so that they don’t shoot light upward.