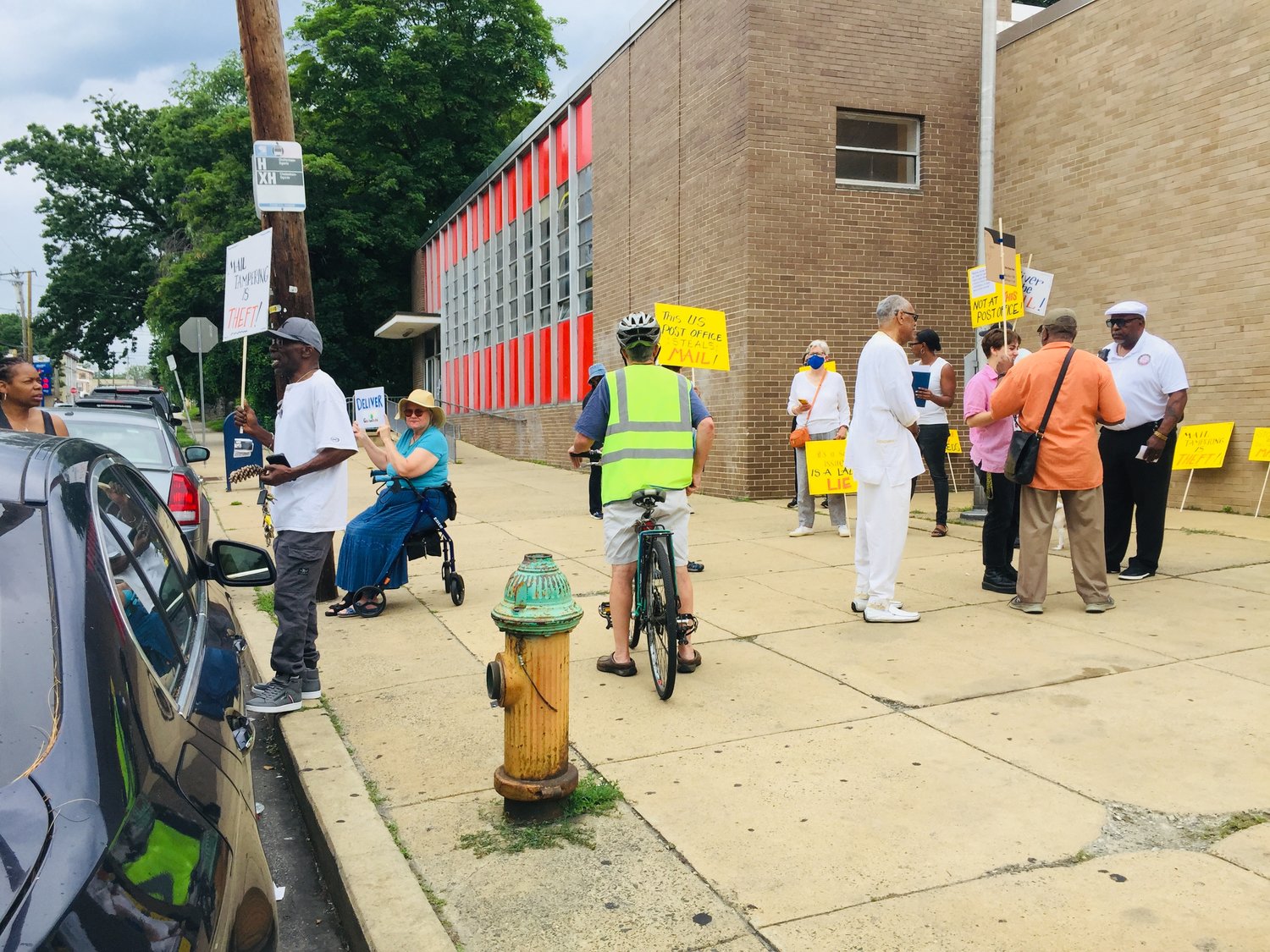 Residents of the Wood Norton apartment complex in Germantown protested outside their local post office on Saturday morning. Demonstrators said they had not received their mail for a month until a June 10 delivery. Here’s a link to the webpage: https://whyy.org/articles/germantown-residents-rally-for-better-usps-service/
Photo by Emily Rizzo/WHYY
Posted Thursday, June 16, 2022 12:00 am
by Emily Rizzo, WHYY

“Hi-de, hi-de, hi-de-ho, post office management has got to go,” about 20 people chanted outside the post office at 5209 Greene Street on Saturday morning. Their signs read: “Give us our mail” and “Mail tampering is theft.” More community members drove by honking and yelling in solidarity.

Germantown residents gathered outside their post office on Saturday morning with a myriad of concerns about mail service.

Mail delivery troubles for residents of the Wood Norton Apartments, 370 W. Johnson Street, were first reported in Germantown Info Hub, a community journalism project. Tim Styer, 67, a Wood Norton resident who has lived in the complex for six years, first posted about his grievances with the post office in a neighborhood Facebook group. Soon, the post had accumulated more than 50 responses from residents expressing similar concerns.

Residents of the historic apartment complex, made up of mostly older adults, said during the rally that yesterday was the first time they had received their mail in a month. Community members spoke about checks getting lost or stolen in the mail, damaged packages, and 45-minute wait times in the post office building.

“Mail is an essential service. The post office is an integral part of our community,” said Styer, who helped organize Saturday’s protest. Styer says checks totaling $6,000 have not been delivered to him.

Mail-related check theft has been an ongoing problem throughout Philadelphia. Since the start of the pandemic, the U.S. Postal Service has also faced budget cuts, staffing shortages, and other challenges that have led to delivery delays across the country.

The Eastern Area Office of the USPS responded to WHYY News about the Germantown community’s concerns in a statement Saturday.

“We are very concerned when customers state they are not pleased with the service they expect,” wrote Paul Smith, district spokesperson.

USPS said customers should call 1-800-ASK-USPS “with any comments or concerns as it helps us identify areas we can evaluate. Customers are also encouraged to sign up for informed delivery free of charge (informeddelivery@usps.com) which enables them to see when they can expect their mail to arrive. We will continue to work to address community concerns.”

But the Germantown ad-hoc neighborhood group is demanding more: They want new management at the post office, as well as a Community Advisory Council to improve mail delivery and communications with the community.

Styer and other residents said they have been told conflicting explanations about delivery delays to the Wood Norton Apartments.

Styer said the post office has told him that postal workers can’t deliver to the building due to construction outside of the complex, that his mail was returned to sender, and that his address was “undeliverable.” Styer said one supervisor in the post office building told him that mail cannot be delivered because carriers can’t get out of the apartment building’s parking lot. But Styer says other delivery carriers, like FedEx and Amazon, do not have problems delivering, and there is a parking spot for the mail carrier to use.

“There was another resident who came up and she said she was told, ‘Oh, all your mail for that apartment complex is in a bin in the back. But it hasn’t been sorted yet,” Styer said. “My point is, you hear different stories. All we know, we don’t have our mail.”

In addition to mail delivery issues, residents have other concerns with the post office building, including a “dirty” lobby, the main door being broken and difficult to enter with a wheelchair, and no passport services.

Hadijatou Jarra, a physician and Air Force veteran, said delivery issues have caused her to go weeks without her medications. She says she is also missing checks, car insurance documents, and letters from loved ones.

“That affects your life … I’m so sad because I lost my brother and I had so many cards from sympathizers and I’m just getting them … and this was four months ago.” said Jarra, also a Wood Norton resident.

Alonzo Matthews Jr., a senior resident who has lived in the complex for 14 years, said mail service quality shouldn’t depend on zip code. “All you have to do is go to Chestnut Hill, Bryn Mawr, to see how it should be,” Matthews said.

After the community members released information publicly about their Saturday protest, a mail truck showed up to the Wood Norton complex, on Friday, June 10, with their missing mail.

According to the Germantown group’s press release sent on Saturday, Styer told the USPS officials that “the protest would not be canceled as he has written complaints from dozens of neighbors and one quick fix would not solve what’s clearly a systemic, far reaching, decades old, serious problem in the community.”

Styer said the residents have a scheduled meeting with Senator Bob Casey, and are in touch with the office of Congressman Dwight Evans (D-3rd District).

Evans sent a Tweet on Saturday afternoon: “I’m working to get answers for your questions about service at the Greene Street post office. If you have a question or complaint about your postal service, call my office at 215-276-0340 or visit evans.house.gov/services/help-with-a-federal-agency.”