Tarik is one of the most inspirational CHC students ever

Tarik, seen here with his mom, Sheila, has overcome a great many obstacles, but he will be graduating next month from Chestnut Hill College. by Len Lear Tarik Mclain, 37, who is on target to …

Tarik is one of the most inspirational CHC students ever 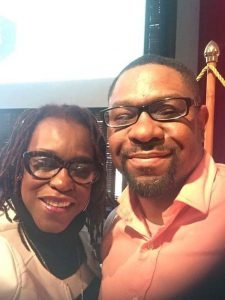 Tarik, seen here with his mom, Sheila, has overcome a great many obstacles, but he will be graduating next month from Chestnut Hill College.

Tarik Mclain, 37, who is on target to graduate from Chestnut Hill College next month with a dual degree in human resource management and business administration, has to be one of the most inspirational students to ever attend CHC.

Tarik grew up in North Philly's Hunting Park neighborhood in a single mother home in the 1980s and '90s as the crack epidemic took hold. As he grew older, he says he could literally see the change in his friends' mothers as some of them got hooked on drugs.

Tarik, who has three brothers, attended the city's two most elite public schools, Masterman Junior High School and Central High School, but his older brother got involved in gang life, and many of his friends dropped out of high school, so in the 11th grade he fell into the trap and did the same thing. “It’s just what people did,” Tarik said, “plus the curriculum was really difficult, and I didn’t apply myself.

“I got caught up in peer pressure and wanted to do what everyone else in the neighborhood was doing, including smoking marijuana and drinking alcohol. I lost my motivation to proceed with high academic standards. I eventually transferred to Lincoln High School as I had a friend there who was a drug dealer. I wanted to follow him as I looked up to him.”

After dropping out of high school, Tarik aimlessly wasted time on the street. His mother, Sheila, pushed him to get a diploma, so they home schooled, and he did get his diploma but did nothing with it as he went back to the street life, just wasting time every day.

At 22 he had an epiphany where he realized he had the ability to do so much better. “I didn’t want to continue to go down that path,” he said.

He began working at the airport, then found a job as a bill collector and then literally hit the lottery when his grandmother entered him for a city job lottery and he won, receiving a job maintaining the grounds around the airport.

While at work in 2011, he met a supervisor who encouraged him to go back to school, but he was very hesitant at first. It had been so long since he had been in school, and Tarik thought he’d be better off just driving trucks for a living. However, he realized a degree could help him move up the ladder, and after praying about it, he decided to go for it.

Tarik took classes here and there over the next four years, but he had no real goals; he just wanted to go to school, and he soon realized he was good at it, eventually graduating with an associate's degree from Community College of Philadelphia in 2014, which motivated him to go further. But in order to get a full degree in Business Administration and Human Resource Management, Tarik decided to attend Chestnut Hill College. However, he ran out of money just three classes short of a degree and couldn’t afford to finish.

He went on a payment plan with the CHC to keep his account active while frantically searching for help when he learned about the Graduate! Philadelphia scholarship. His touching essay won him a scholarship, he “jumped up and down” with his wife and daughter (who is so proud), and now he will be graduating next month! (Graduate! Philadelphia is an organization in its 11th year that helps adults return to college to complete their degrees. CHC is one of their partner colleges and universities.)

“Graduate! Philadelphia has been instrumental in my becoming the person I want to become,” Tarik told us last week. “Without them I’d be in dire straits and wouldn’t be able to acquire this degree I’ll be obtaining in December. They deserve so much credit. Advisors were there for me to help with the scholarship application and guidance.”

Tarik now plans to obtain a Masters Degree in Divinity at Eastern University in Radnor and “help others to overcome like I did. My goal is to be an inspiration to people, especially people from my community. I also plan on becoming more involved in the community and will soon be joining a fraternity that does community service.”

Tarik, who now lives in Nicetown, has been married for two years to a nurse, Timika. They have one daughter, Zion, 9.

What would Tarik tell other young people who grew up the way he did? “Never give up hope. Dream. Believe that their circumstances don’t determine their destiny!”

For more information on Graduate! Philadelphia, call 215-498-1504 or visit www.graduatephiladelphia.org.