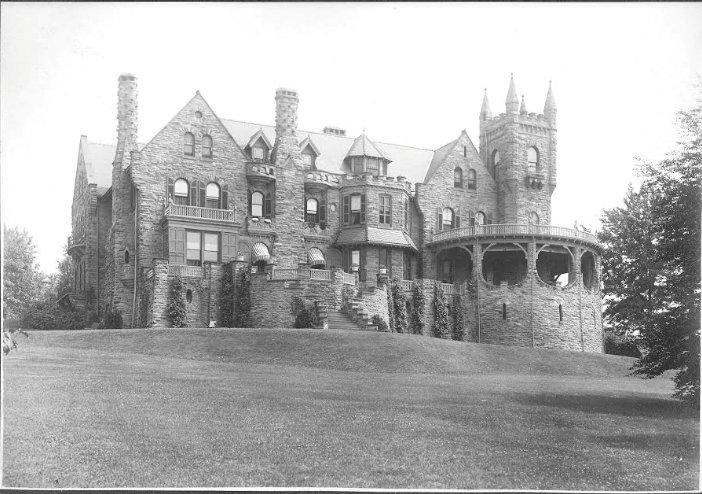 This continues the story of the architectural legacy of, Edwin North Benson (1840-1909). Part 1 appeared in the Local last week.

The decade of the 1880s saw a stylistic evolution in the designs for houses in Chestnut Hill, moving away from the mid-nineteenth century Italianate and French Second Empire styles. In the boom years after the Civil War, country house owners wanted bigger and ever more boisterous houses. Philadelphia’s architects responded with their own local variations on a style imported from England: High Victorian Gothic Revival.

Scott was one of a number of proponents of the Gothic Revival style in that country, reacting against what they saw as the pallid Classically inspired architecture of the mid-nineteenth century (think Regent’s Park). In their view, the Gothic style both grew organically out of English history (despite having originated in France) and

was well suited to a broad range of building types, including government buildings, churches, schools and domestic architecture.

The world had been dazzled when the new Houses of Parliament were largely completed in 1860, designed by Sir Charles Barry and A.W.N. Pugin. George Gilbert Scott’s own masterpiece followed in 1873 with the opening of his glorious spikey Gothic Saint Pancras Station and hotel.

Such famous English buildings served as models for Philadelphia’s architects as they designed a number of High Victorian Gothic Revival castles on the breezy bluffs of Chestnut Hill.

The Hewitt Brothers designed Henry Houston’s Druim Moir in the related Scottish Baronial style, completed in 1886, now sadly missing its crowning upper stories. George Pearson designed the house at the end of Chestnut Hill Avenue that became known as Disston’s Castle (demolished). Theophilus P. Chandler designed a similar pile at Compton for siblings John and Lydia Morris, completed in 1887. It, too, has been demolished, but the grounds happily survive as the Morris Arboretum. And there were others.

Benson also hired Chandler to design his new house, a vast crenelated stone pile with some 42 rooms. Its spikey vertical gables, dormers, chimneys and tower contrasted with the wide horizontal porches and stone terraces that buttressed the building on its sloping site. The exterior stonework was rough and masculine, encasing a forbidding and impressive High Victorian Gothic castle that offered spectacular views. Built as a summer house, the building provided no heat and featured fire proof construction as Benson refused to have another house burn down.

“It is not difficult in looking at such a structure to imagine yourself in ‘merrie England’ or on the banks of the Rhine,” Samuel Fitch Hotchkin notes in his “Ancient and Modern Germantown, Mount Airy and Chestnut Hill,” from 1889.

The house was surrounded by extensive landscaped grounds and formal gardens. Family photographs now in the archives at the Chestnut Hill Conservancy show large summer house parties of family members and friends in white linen, enjoying the porches, tennis court, pool and gardens. For decades, the house served the Bensons’ expanding family, including their six children and many grandchildren.

Their son Edwin North Benson, Jr. (1877-1954) married Ethel Weightman, one of the daughters of William Weightman, famous in the later nineteenth century as “the Quinine King.” They lived in Lynnewood Cottage next door, which was gradually extended, including a wing from 1913 designed by Mellor & Meigs (before George Howe joined the partnership).

After old Mr. Benson’s death in 1908, his widow, Ida, continued to split her time between Lynnewood Hall and their city house at 2107 Walnut Street. When she died in 1930, the Benson world in Chestnut Hill evolved again.

Both Lynnewood Hall and Lynnewood Cottage were perceived by the younger generation to be too large and out of style by the time of the Depression. The big house was demolished in 1933. Its land was subdivided and Lynnebrook Lane was put through. Its surviving tall stone gateposts are on Bethlehem Pike at the entrance to a one-level house that was constructed in 1952, their spikey stonework serving as a reminder of the lost castle.

In the height of the Depression, the next generation of Bensons built a new house on a lower portion of the family land. It was in a more appealing style that might be dubbed Modern Italian, designed by noted Philadelphia architects Willing, Sims & Talbutt, who designed several similar houses around Chestnut Hill. It is a large house, but was better suited to more modern lives. It was also designed at a time when architects who had worked in a range of historical styles were starting to explore Modernism, which may explain its simple roofline and massing.

That house, today with its distinctive green copper roof, was completed in 1938, after which Lynnebrook Cottage was demolished and parts of the former pool and gardens incorporated into the grounds of the new house. The simpler stone gateposts of Lynnebrook Cottage also remain on Bethlehem Pike.

The Benson legacy lives on in numerous other ways in and near Chestnut Hill, including a stained glass window in Saint Paul’s Church that was funded by Edwin North Benson, Sr. Sunnybrook Golf Club was founded by Benson family members and others and its original location was on farm land in Flourtown that had been owned by the family. And numerous descendants live today in Chestnut Hill, continuing the family’s rich architectural history and contributions to our village.

The author acknowledges the invaluable assistance of the Archives and staff at the Chestnut Hill Conservancy.