The Thunder rolls to a history-making run

The season started so badly for the Chestnut Hill Thunder that the rules of baseball helped ease the embarrassment.

The Thunder rolls to a history-making run 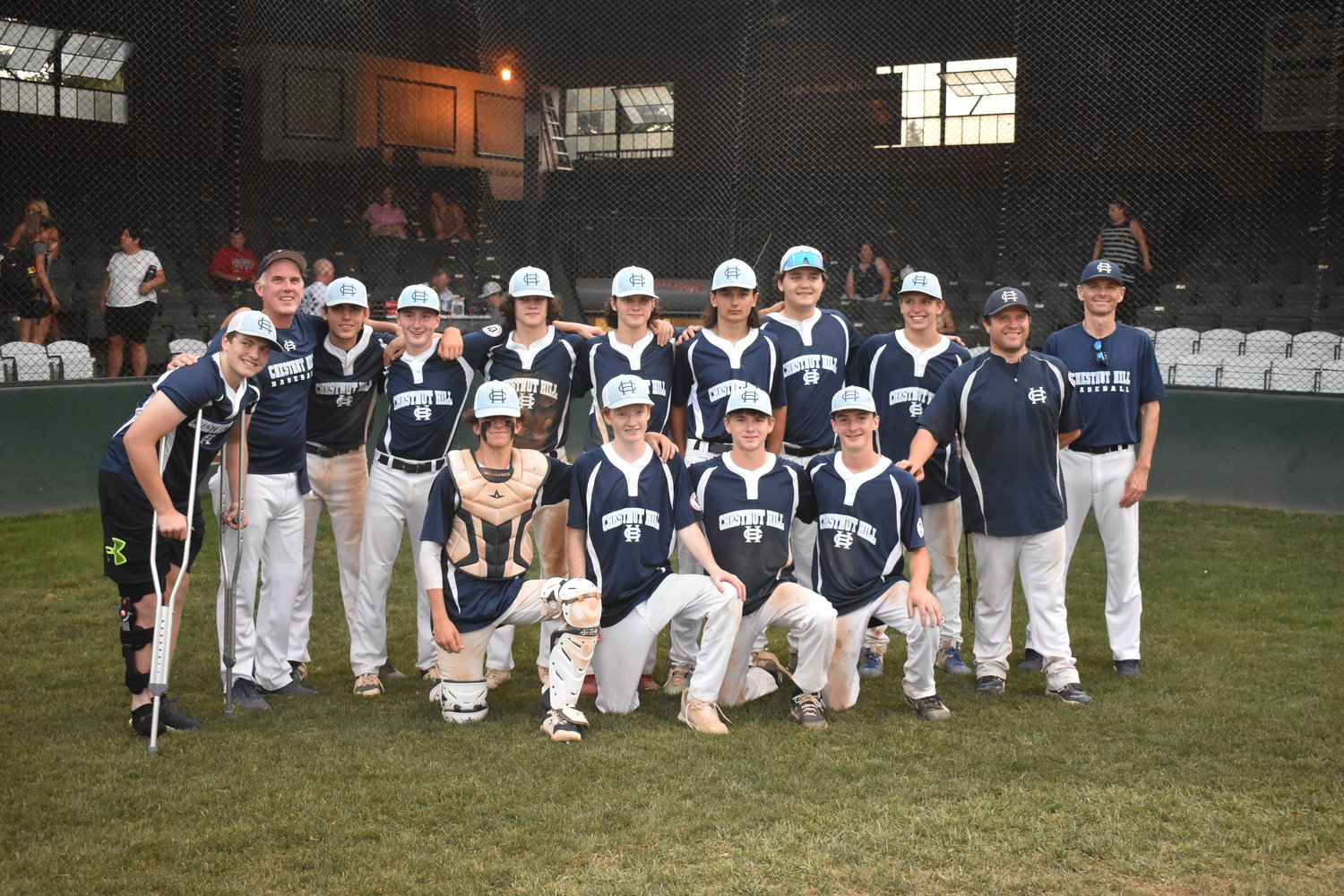 The Chestnut Hill Thunder completed a history-making run in this season’s Connie Mack Travel Baseball league, turning around a confidence-shaking 0-4 season start to make the state championship tournament and take the field at Limeport Stadium, a legendary ballpark built in 1932 and fashioned after the old Connie Mack Stadium in North Philadelphia. In the team’s third tournament game, the Thunder beat Nor-Gwyn, 6-4, but later lost to Pennridge and was eliminated from the tournament.
Posted Wednesday, September 7, 2022 12:00 am
by Kristin Holmes

The season started so badly for the Chestnut Hill Thunder that the rules of baseball helped ease the embarrassment.

The team got mercy ruled.

In the season’s first three games, the Chestnut Hill Youth Sports Club team was losing by so much – in this case, at least 10 runs – that officials ended the games by the close of the 5th inning because there was little chance the team could catch up.

It was the kind of wake up call that forced teammates to take a look not only in the mirror, but at each other. The jolt would mark the beginning of a change that three transformational months later would find the team in what coaches describe as an unexpected and “magical” place, an outcome that seemed out of reach for players who three times early in the season had been granted mercy by the game.

As a traveling senior level team of 15- and 16- year olds, the Thunder is part of the Chestnut Hill Youth Sports Club, a community organization of more than 1500 families that provides team sports for youngsters. The sports organization, based at the Water Tower Recreation Center in Chestnut Hill, runs programs for youngsters in soccer, lacrosse, basketball and baseball and draws families from throughout Northwest Philadelphia and nearby suburbs.

When the Thunder season started, the team practices, training and games sometimes came in second to players’ commitments to other teams they played for, family vacations and summer jobs. Players, who compete in the national Connie Mack Travel Baseball league, had little time to jell as a team, and in the early days of the season, it showed. The Thunder started out with an 0-4 record.

“We lost all of them – by lot,” said Cullen Crosby, 16, who plays third base and pitcher, “and it would sometimes be a different group of players [playing each game].”

“We have 15 kids from seven different schools on our team this year,” coach Mark McGoldrick said. “They really didn’t know each other that well. The tough part is that our season starts right after the schools’ season stops, so there’s not a lot of time for them to get to know each other.”

But eventually, the team reached a turning point.

The student athletes started to spend time together, get to know each other as teammates and like each other. Coaches began using the time before games for intense practice instead of the usual pregame warmup. Players gained confidence in their playing positions. Game errors dissipated. Team comradery multiplied.

“Everyone was more friendly and we started to work together better and that’s when we started to do better as a team,” said shortstop and pitcher Edan Crosby, 16 and Cullen’s twin.

The box scores began to reflect the team’s transformation. What had been a 0-4 start turned into a mid-season string of wins and a season ending that once seemed improbable. In the last game of the season, the Thunder beat Pennridge by a score of 7-6. With that, the team scored a spot in the state championships, the first time in the Chestnut Hill program’s history.

“It was an amazing feeling,” said player Jace McGoldrick, 17, a catcher for the Thunder and the coach’s nephew. The team was going to play in the legendary Limeport Stadium, an old-fashioned ballpark built by Howard “Lefty” Fegely, a dairy farmer and baseball fan who in 1932 turned his cornfield into a field of dreams.

But the hard knocks that plagued the team earlier in the season refused to leave. As the Thunder prepared to take the storied field at Limeport – which was designed to resemble the old Connie Mack Stadium in North Philadelphia – one pitcher had to leave the lineup because he needed surgery on his leg. Another player’s appendix burst a couple of days before the state tournament. Only nine of the Thunder were available to play.

In the tournament’s first game, the team took on Northwest Bethlehem, a team that had won its Lehigh Valley division. Thunder pitcher Charlie Morris threw through nearly six innings, then Edan Crosby took over. With the bases loaded in the ninth inning, Crosby struck out three batters. The Thunder won 2-1.

It was pretty crazy,” Edan Crosby said. “Everybody was riled up, people were yelling. Parents on the other team were yelling at the umpires. It felt good.”

“The mental makeup these kids had is special,” Coach McGoldrick said, “they didn’t get rattled.”

That toughness carried them into the next game in a tournament where the hometown baseball fans and grounds crew had begun cheering for the scrappy team from Philadelphia.

In that game, the team fell behind to Montgomery team by 7 runs. The Thunder fought back to take the lead, 8-7, but eventually lost. “We just ran out of gas,” the coach said. The team won their next game against Nor-Gwyn, but then lost to Pennridge and was eliminated from the tournament.

“The key thing is our kids played  tough and hard – and respectfully,” said Brien Tilley, commissioner of the Chestnut Hill Youth Sports Club baseball program. Parent Kim Morris said her son Charlie has learned discipline and had fun while doing it. Jaime Capacte, vice president of the Thunder’s Bux-Mont division in Connie Mack called the team’s play “incredible,” particularly after what seemed like a fate-sealing start.

“Obviously, we didn’t start out that well, but we persevered from having a bad record through not having a lot of kids and we were able to make states,” Jace McGoldrick said, “so perseverance was a good lesson to learn.”

The team also learned that good relationships can lead to great outcomes, Cullen Crosby said, “Once we knew each other, we built friendships and it became easier to play.”